Hey, remember back in August when this website turned 10 years old?  And remember in September and October, when I started reliving some of the highlights of those ten years in a multi-part article series?  And then a new Muppet movie came out, and there were a million things to talk about, and few months went by and I never posted part three?  Yeah, I remember that.  And remember when I finally posted part three?  TODAY?

So, let’s see… Where did we leave off? Ah, yes. The beginning of aught-six.  Here’s a peek at what you would have seen if you checked ToughPigs.com on January 1st, 2006: 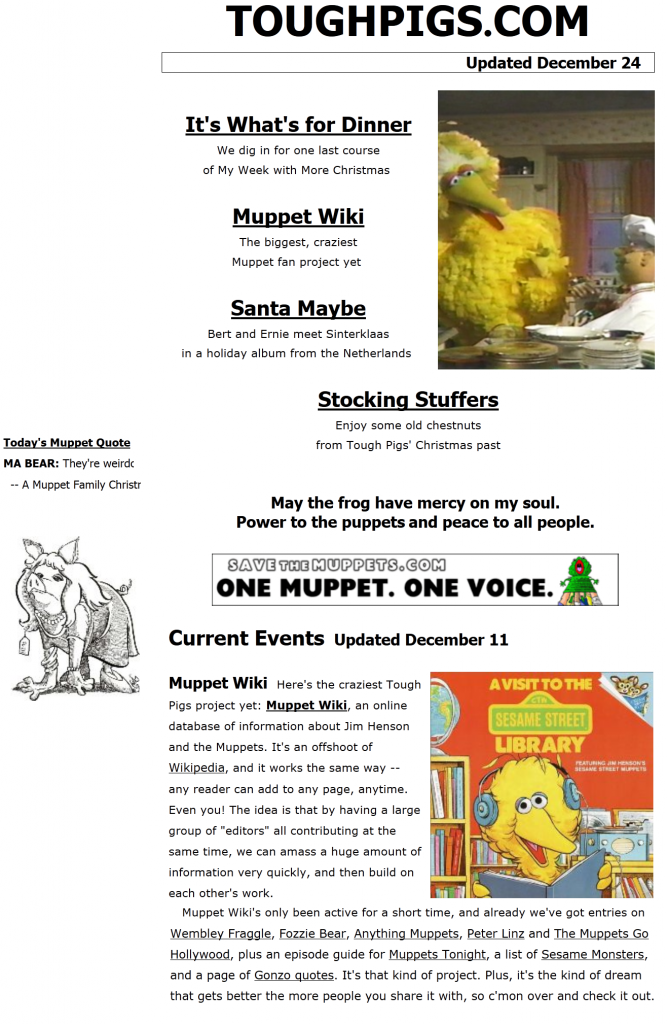 That’s also what you would have seen if you had checked the site on February 1st, and May 1st, and October 1st, and December 1st.  Tough Pigs founder and head writer extraordinaire Danny Horn didn’t update the site all year… and the reason for that is right there in black and white.  Danny started Muppet Wiki, which started with basic descriptions of major Muppet characters and episode guides, and eventually went on to link the Muppets to everything in the known universe.  If you’ve ever actively participated in a wiki, you know how it can suck up your time, and that’s exactly what happened to Danny in his position as one of the administrators of the greatest wiki on the whole entire internet.

But then, in January 2007, like cockroaches after a nuclear holocaust, signs of life began to appear on the site.  Danny announced “The new Tough Pigs,” a bold new era in which an assortment of smart, funny Muppet geeks would be contributing articles to the website.  (Eventually, Joe Hennes and myself would take over the bulk of the writing. And the hosting fees! Woo-hoo!) I chimed in soon after the new year with “Christmas Cheer: Big Bird on Deal or No Deal,” a recap of the bird’s guest spot on the Howie Mandel-hosted game show. 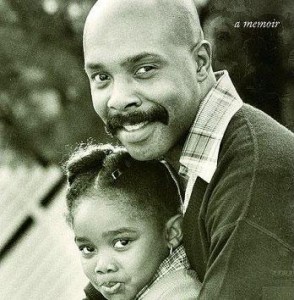 And so, Tough Pigs was back in action with a slew of new articles!  In “‘Check’ It Out!” Shawn Pero questioned the necessity of Muppet checks. In “The Life of a Gordon,” Joe reviewed the list-filled Roscoe Orman memoir that was released during the website’s hiatus! And in “Do Doo Do Doo Who?” Joe discussed a singing toy that wasn’t actually a Muppet toy at all, which is probably not something we’d do today.

In February 2007, Joe reviewed some crappy, super-expensive Muppet artwork in “Not Quite Suitable for Framing,” while Shawn Pero wrote snappy comebacks to decades-old viewer mail from the Children’s Television Workshop archives in “Can You Tell Me How to Get, How to Get to My Prescription Medication?” Why did Mr. Bibula hate Larry and Phyllis so much?

We had some good ideas in March 2007: In “Tough Pigs: November 9th, 1970,” Anthony Strand posted an article all the way from 1970, complaining about the changes made to Sesame Street in its second season.  In “Shimmelfinney, We Hardly Seen Ye,” Joe explored the possible origins of everyone’s favorite Fraggle Rock character, Doc’s unseen next-door neighbor.  And in “One Muppet, One Joke,” I took a look at some of the greatest one-joke Muppets from various productions. 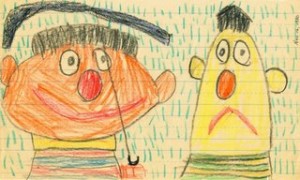 In May 2007, Shawn Pero wrote a hilariously biting review of the Henson Company’s first foray into manga in “Return to Labyrinth? No Thanks.“ And we had the first — and so far, still the only – “Young Muppet Fans Art Extravaganza,” featuring lots of fan art by kids, and some by grown-ups who draw like kids.

Spring gave way to summer, and in June 2007, we did a three-part series of reviews of The Dark Crystal. Basically, we took three whole articles (my “I Don’t Know; I’ve Never Gelfled,” Michal Richardson’s “Crystal Meh,” and Joe’s “The Sounds of Skeksis“) to say “We don’t like it.”  Looking back, it was a bit much, but we were pretty darn proud of ourselves at the time!

In July 2007, I did a five-part series called “My Favorite Muppet of the Day,” inspired by the fact that I can never seem to choose just one favorite Muppet on any given day.  My choice of Beautiful Day Monster on day two proved to be shocking and controversial.  You know, I always meant to do a sequel to that article series… Maybe I’ll get around to that in the next four years or so.  Later that month, Joe led a rousing Muppet Book Club discussion on the Elmo-centric volume Wait for Me! With a special appearance by Grover’s grandpa!  In the book, I mean.  Not in the discussion.  But wouldn’t that have been something!

In July 2007, we finally got the second season of The Muppet Show on DVD (remember when a year seemed like a long time to wait?) and Joe celebrated with “24 Reasons to Watch Season 2.”

In August 2007, Danny chimed in his with raves about season two in “Breaking News: The Muppets Are Funny.” Which is a funny title… but honestly, there were times when it was easy to forget. 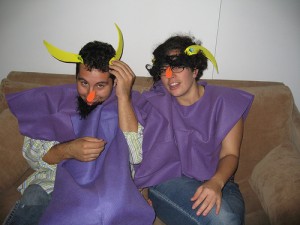 Joe presented the Halloween Parade 2007 in October, which is a fine month for a Halloween parade. Including a homemade Two-Headed Monster costume!  The same month, Joe wrote “Making Sense of Muppets,” an analysis of the Muppet fan’s mysterious sixth sense.

The most exciting thing to happen in November 2007 was the release of the Sesame Street Old School Volume 2 DVD set, which got Muppet fans talking for several reasons. The cover art included a mysterious icon, which Joe scrutinized and theorized about in “Folder? I Don’t Even Know Her!”

And then there was the Disclaimer Scandal. The Old School set came with a disclaimer before each episode, pointing out that the shows from the 70s were not made with the same educational standards that the show applies to children today. It was just a minor molehill, but once the internet took notice of it, it became a major mountain. I wrote the pretentiously-titled piece “The Voice of Reason” in an attempt to soothe the over-reactors.

When December came along, it was time to watch The Muppet Christmas Carol, but man, it’s hard to sit through that one boring song.  So I wrote “27 Things to Do During ‘When Love Is Gone.’” If you haven’t already, you should print it out and keep it in your DVD case.  Later that month, Joe watched and live-blogged Elmo’s Christmas Countdown. Summary: He liked the set, didn’t like Ben Stiller.

The new Tough Pigs was firing on all its rusty old Studebaker cylinders as 2007 gave way to 2008. (There were no design changes during that time, so I won’t bother showing you a screenshot.) 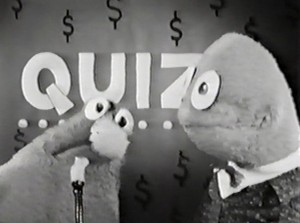 In January 2008, I created “The Easiest Muppet Trivia Quiz Ever!“, guaranteed to make any human with basic reasoning skills feel like a Muppet expert.  Even your dad!  That was also the month we found out Kermit made a cameo in the Dustin Hoffman movie Mister Magorium’s Wonder Emporium, which Joe suffered through and reviewed in a piece called “Mr. McAllister’s Wonder Disaster,” which cracks me up every time.

Hey, February 2008 was an eventful month for Tough Pigs. I wrote one of my best-received articles ever, “Mahna Mahna, Yes… But Why?” in which I very seriously and not comically attempted to get to the heart of Mahna Mahna’s enduring popularity.  That was also the month Joe and I were on Steve Swanson’s MuppetCast podcast for the first time. (This may have been when Steve and I discovered we have the same birthday. Which makes it easier if you want to buy us both a present.)  Also also, rumors of a possible Jim Henson biopic inspired Joe to call for casting suggestions in “Who Will Be Jim?” Among the actors suggested to play Jim: That guy from How I Met Your Mother, Jason Segel.

In March 2008, Joe posted one of the best Muppet Book Clubs we’ve ever done: “The Together Book.”  It’s a book where Roosevelt Franklin and Farley roller skate with no pants on.

If you visited ToughPigs.com on April 1st, 2007, you would have seen this (Click to see the whole thing): 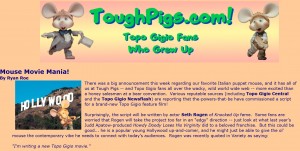 Tough Pigs’ own web-savvy Scott Hanson helped us replace the usual site with a Topo Gigio fan site for 24 hours… and if I do say so myself, for those 24 hours we were the best Topo Gigio site around! 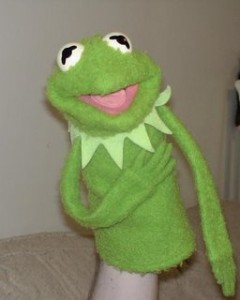 A week later, I posted some of Tough Pigs readers’ “Most Treasured Muppet Possessions,” which ranged from Kermit dolls to a copy of Of Muppets & Men signed by all the puppeteers.

In July, brand-new Muppet videos started popping up on YouTube, much to our excitement. I responded by comparing “Stars and Stripes Forever” with the Will Smith movie Hancock. Also, Joe gave us an alphabetical rundown of season three of The Muppet Show, which had been released on DVD a few weeks earlier.

Remember August 2008, when the Muppets’ first Studio DC: Almost Live special aired, and we all felt like hiding under the bed for a few years?  Anthony optimistically suggested that it might help kids learn to love the Muppets, but guest reviewer Leah Hooper showed no mercy in her review, “Studio DC: Almost… But Not Really.”  Fortunately, that month also saw a major turning point for ToughPigs.com: Our very first Muppet interview.  The interviewee was Matt Vogel, who was then best-known as Big Bird’s understudy on Sesame Street, before he ascended to greatness as the new performer for Floyd, Crazy Harry, and Uncle Deadly.

The first week of September 2008, Anthony and I traded off on the fun five-part series “Hidden Gems of Sesame Street Music,” in which we identified some of our favorite lesser-known Sesame songs.  Including Buffy St. Marie playing the mouth harp and Maria rapping. (In separate songs, sadly.)

The biggest story for Muppet fans that month, though, was the filming of A Muppets Christmas: Letters to Santa. We posted not just one but two on-set reports during the special’s New York City production.  Those set visits led to “My Week with Steve,” our five-part interview with the terrific, insightful Steve Whitmire. 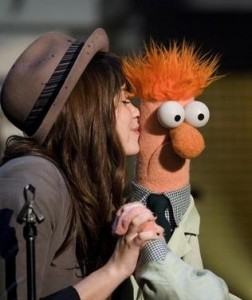 In October 2008, the other shoe dropped and we got the second of two Studio DC: Almost Live specials. Guest reviewer Peter Papazoglou gave us “This Almost Studio Live Thingy Show.”  And then we never spoke of it again.

As October turned into November, Joe and Anthony prepared for the upcoming presidential election by facing off with “Tough Pigs Election: Gobo vs. Ernie.”  The issue up for debate: Who would make a better president: The explorer Fraggle or the Rubber Duckie enthusiast?  You know, it’s really fascinating to look back at these articles now, after three years of Ernie in the White House.  I think he’s done a pretty good job, the international Boogie-Woogie Sheep incident notwithstanding.

In early November, Joe posted the 2008 Halloween Parade, and there was much merriment.  Shortly thereafter, he reviewed Pepe’s book It’s Hard Out Here for a Shrimp, with considerably less merriment.  Later that month, I decided to perform a valuable public service by answering questions posed by internet-searchers who ended up on Tough Pigs, in “The Answers You’ve Been Searching For.”

November was followed, as is so often the case, by December.  I complained about that picture of the Swedish Chef where it looks like he’s smoking a joint.  A new King of Ugly Toys was crowned in the Ugly Muppet Toy Pageant 2008.  Letters to Santa made a great first impression on Joe.  And in “Better to Have Gifts Than Receipts,” I evaluated Christmas presents from Muppet specials.

Whew!  That’s the end of the year, so I’ll wrap up this installment.  Stay tuned for part four… Will I be able to finish documenting the last three years in a single post, or will we be doing these 10th anniversary posts until our 20th anniversary?  I can’t wait to find out!