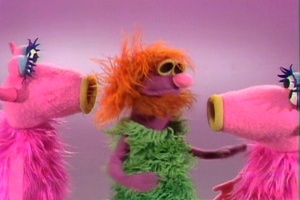 Every day I receive Google news alerts for the word “Muppet,” informing me of when and where that delightful word has come up on the web. It seems like at least once a week a result comes up that’s somebody posting a video clip of “Mahna Mahna” in their blog or on their website. I’ve been getting these alerts for over a year now, and “Mahna Mahna” still shows up on a regular basis. It seems like it’s been passed around the internet more than any other clip that doesn’t involve breath mints and cola or rock stars on exercise machines. Often it’s accompanied by enthusiastic comments like “I love this one!” or “this is my favorite muppets song!!!!!!!11”

Why is this the single most beloved and best remembered musical number from the show? There were hundreds of musical moments over the 120 episodes of the series, and yet the representative one is a bit from the very first episode that stars none of the regular characters. Why? Is it because the arrangement of the song is infectiously catchy? Is it because the design of the puppets is pleasing to the eye? Is it the brilliant performance by Jim Henson as Mahna Mahna?

I believe it goes deeper than all of these.  Clearly, when we watch “Mahna Mahna,” we’re seeing a reflection of ourselves that causes a spark of recognition to flare up inside us, and it’s this spark that draws us — internet users from all walks of life — to revisit this clip over and over again.

Perhaps there are those who, on some level, see themselves as the Snowths, the pink cow/pig creatures who sing the “doo-dooo doo doo-doo” part. These people crave order and reason; to them, the Snowths represent the Apollonian ideal of self-control. The Snowths have clearly spent copious amounts of time carefully rehearsing for this performance, and they are determined to get it right. You can see it in their reaction to Mahna Mahna: They are completely unamused when he starts ad-libbing, threatening to derail the whole number with his random shenanigans. Those who view the clip and respond positively to the Snowths have the same desire for things to go precisely as planned; additionally, they may have horns.

On the other hand, there are those in the audience who (consciously or not) identify with Mahna Mahna. Mahna Mahna is the shaggy humanoid character who sings the “mahna mahna” parts of the song, and he is a true free spirit. He has an insatiable urge to express his individualism, and he’s going to do it even if it the results are too chaotic for the Snowths to handle. He’s the nonconformist, the iconoclast, the scruffy, unwashed hippie, representing the Dionysian philosophy of following one’s natural instincts. It’s highly likely that he never even looked at the sheet music before showing up for the show that day, instead relying on improvised scatting to make his way through the song. He believes rehearsal would only serve to destroy the energy in his spontaneous performance, a belief echoed in the hearts and minds of those who view the clip in silent admiration of him.

And yet, in the Muppet Show musical number “Mahna Mahna,” neither of the two differing viewpoints is presented as superior to the other. Can you imagine what it would be like if the song consisted of the Snowths alone on the stage, singing “Doo-dooo doo doo-doo” without any kind of counterpoint? Unbelievably boring is what it would be like, despite their any attempts at arm-swinging choreography. But if it were a solo by Mahna Mahna, it wouldn’t be any better. It would just be some fellow repeatedly stating his name and mumbling nonsense syllables, and without the presence of the Snowths as “straight men” it simply would not be funny.

The message, then, is that both lifestyle choices are valid. Some people may be Mahna Mahnas and other people may be Snowths, but that doesn’t mean they can’t produce a heck of a catchy song when they get together. It’s quite obvious to me that this is the true reason for the enduring popularity of this Muppet Show segment, and any other simplistic interpretation (e.g. “It’s funny!”) is unquestionably wrong.

So keep circulating that clip, citizens of the internet! Blog it all over the world! Continue spreading the archetypal message of tolerance and cooperation! And perhaps one day we will finally divine the answer to the only question still remaining: Are those supposed to be sunglasses or his eyeballs?

Click here to discuss the Mahna Mahna phenomenon on the Tough Pigs forum!

Did You Know… The Muppet Show Is a COMEDY?