Not Quite Suitable for Framing

What do you do when you’re a Muppet fan with an extra $950 burning a hole in your proverbial pocket? Might I suggest spending it on some mediocre art?

While Disney continues to try and figure out just who is left to run things in the Muppets Holding Company, merchandise continues to trickle out. And I do mean trickle. Without a production to promote, Disney’s plan to keep the hopefully-temporarily-inert property alive in our hearts and wallets is to put out stuff that we can see on their website, yet can’t buy. The latest in this endeavor is a small series of limited-edition Giclée paintings. More on that strange word in a minute.

A total of six paintings are available on DisneyShopping.com. Sadly, when you do a search for “Muppet” on the site, you come up with only one of the pictures, a t-shirt, a watch, a small collection of CDs and DVDs, and a set of (again, overpriced) pins. If you take away the stuff you can purchase at the local Wal-Mart, the selection of what you can buy from the company that owns the Frog and his pals is bleaker than anything I’ve ever seen. So when I heard that you can buy paintings on their site, imagine my glee at the prospect of new stuff to throw my money at!

Let’s backtrack for a moment to a couple paragraphs ago when I introduced a new vocabulary word: Giclée. According to Wikipedia, Giclée (pronounced “zhee-CLAY”) is a process to reproduce fine art from a digital source using ink-jet printing. So, essentially, these pictures are prints made from the Hewlett Packard printer next to my desk.

The first four pictures are pop-art portraits of Kermit, Piggy, Gonzo and Animal. As you can see, there’s just a little bit too much detail in the images, which makes the pictures walk that line between photo-realistic and illustration a little bit too uncomfortably. If you want a photo, go with a photo; if you want to capture the essence of the character, go with something cartoonier. My first reactions were that Kermit looks old and tired, Gonzo should not be photographed from straight ahead, and Animal has no neck. I actually kinda like the Miss Piggy, though I’d sooner cut her picture out of a magazine and slap it in a frame (assuming she shows up in magazines any time soon). I might not want to put these over my headboard, but I would definitely consider buying them as pins or stickers. These babies are 14″X14″ and go for $295 each. 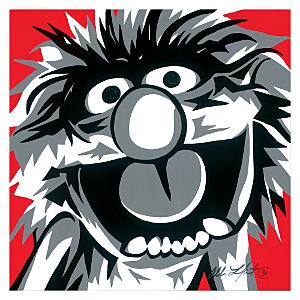 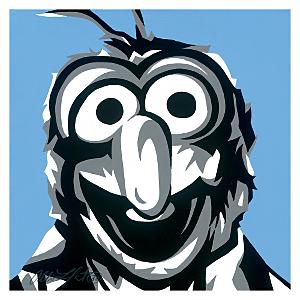 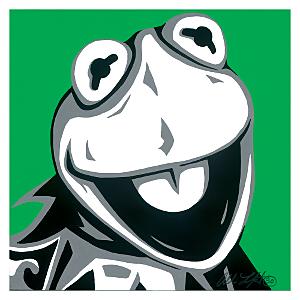 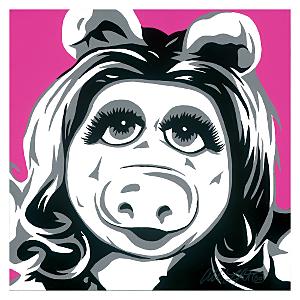 Next up is a 20″X27″ picture of the Electric Mayhem. My gut reaction was that it looked like a color-by-number watercolor. I have been told that it is a parody of the style of some psychedelic rock band posters from the 60s and 70s, so if that’s true, then props to Disney. Though as I’m trying to critique the painting, I find that I can’t stare at it too long or I start to freak out about either going blind or accidentally inhaling the fumes. The one big drawback to my appreciating this one is the terrible caricature of Animal who looks more like Rip Taylor than a Muppet. Though Rip Taylor does lend himself to Muppet-impersonation more than most. I must say, I’m curious as to what this picture looks like with a black light. And what it looks like while I’m stoned out of my gourd. You can make this one yours for a whopping $595. 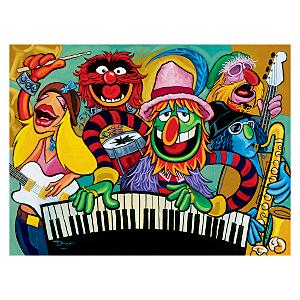 Last but far from least is a recreation of the scene everyone mistakes for the opening scene of The Muppet Movie. Kermit’s in the swamp, strumming on the old banjo, southpaw-style. At a first glance, you can tell that Disney staff artist James Coleman has a lot of talent in painting scenery. The swamp, the trees, the sunset, the perspective, it’s all spot-on. Even his Kermit, when viewed as a thumbnail, looks like he’s actually singing a song as solemn as “Rainbow Connection,” looking up to the Georgia sky with hope in his eyes. And then you zoom in. This has got to be one of the worst images of Kermit I have ever seen. To Disney, I say shame on you for allowing this to even come close to the public. He looks like a cheap reproduction puppet made for a 5-minute parody on MadTV. When you only make 2 or 3 new products a year for the entire brand, you’d better be damn sure they’re picture perfect. Or else you end up with quite the opposite type of picture. This 20″X20″ picture will put you in the poor house with a devastating pricetag of $925. 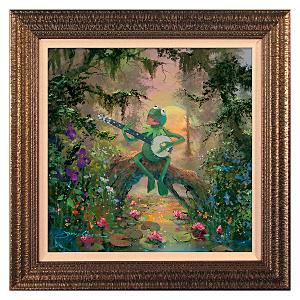 Add $25 for shipping and handling and please allow 2-4 weeks for delivery. Oh, and start saving for that $1,100 painting of Mr. Poodlepants coming out in May.