Do Doo Do Doo Who? 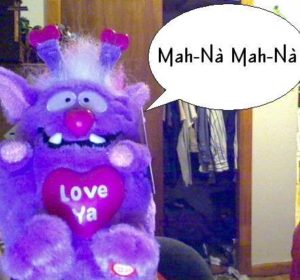 Allow me to introduce you to the Monster Maniacs. The name doesn’t lie, they’re monsters and they’re quite manic. They come from our good friends at Kmart who have successfully amalgamated the cuteness of a Muppet monster, the collectability of the Furbee, the pizzazz of a singing hamster, and the hair of a troll doll.

“But ToughPigs Joe,” you ask, “Why are you doing a commercial for Kmart on a Muppet web site?” Well I’ll tell you, ominous voice. These furry creatures sing “Mahna Mahna” (the song) and sound pretty durned close to Mahna Mahna (the character).

I had to press the little button on the toy’s foot a couple dozen times until I could guarantee that it isn’t Jim Henson’s voice, stolen and encapsulated inside a fur-covered hunk of plastic. What I mean is, it sounds just like Jim. But it ‘aint Jim. But it sounds like him.

He sings the song, he does a little dance, he lights up. This guy does everything except cook you breakfast.

Kmart has been cranking these bad boys out over the past year or two. They made them for Christmas, Halloween, Valentines Day, and maybe even Gorilla Suit Appreciation Day. My own Valentines Day Monster may be a little pink for my motif, but I do enjoy the fact that I can squeeze his tootsie and hear Manha Manha whenever I want. Or at least the next best thing.

My suggestion: go to YouTube.com and type in “Mahna Mahna,” sift through the hundreds of people who thought they were the first to upload a video of the Muppet version, and you’ll find a horde of videos of different styles of Monster Maniacs doing their very best Jim Henson imitation.

And if you find yourself at the local Kmart, you can pick one up for just $9.99. Or you can press the button on every single one on the shelf and run away. 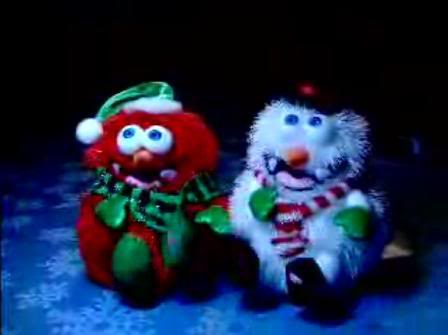 Not Quite Suitable for Framing