Better to Have Gifts Than Receipts

I got to thinking… Of all the Christmas presents exchanged in all the Muppet Christmas productions, which are the good ones and which ones should have stayed under the tree? (All of these specials are look-up-able on Muppet Wiki.)

The gift: Kermit gets Miss Piggy a mink

I remember seeing the first airing of the special on TV, and thinking, Cool, a new character! I guess she’ll be part of the Muppet gang now! Of course, we’ve never seen Maureen again, so I can only assume Piggy either returned her for store credit, or… well, I won’t say any more lest I get Piggy in trouble with PETA.

Score: 7.5/10. Kermit probably spent a lot of money on Maureen… but what do minks eat?

The gift: Doc and Sprocket get mittens and dog biscuits, respectively, inside a piñata from Doc’s coworker Señor Gomez

While Gobo is busy learning about faith and causing his friends to freeze to death, Doc and Sprocket get a subplot in which Doc tells Sprocket about winter holidays from around the world. So Señor Gomez’s piñata is a fine gift, both educational and fun. Too bad nobody wants mittens for Christmas.

The gift: Jamie’s parents or possibly Santa (I’m not sure it’s made clear which) give Jamie a Meteora action figure 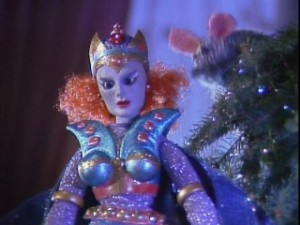 The gift: Elmo gives Dorothy a drawing he made

Elmo spends this entire special trying to think of a good present for Dorothy, but gifts such as a new sweater, a bottle of wine, or a puppy are just not appropriate for a fish. On a suggestion from a fat guy in a red suit, he uses his imagination and comes up with an original work of art called “Dorothy’s World,” which depicts Elmo inside Dorothy’s fishbowl. (Presumably in Dorothy’s World Elmo has gills.)

Score: 4/10. This is a last-minute gift that looks like something scribbled by a three-year-old. I’m only scoring it this high because Elmo trekked all the way to North Pole and sat through a boring song about the Christmas spirit in order to get Santa’s advice.

A Muppets Christmas: Letters to Santa

The gift: The Muppets’ neighbor Claire asks Santa for, and receives, Christmas with the Muppets

Santa grants a few different wishes in the new Muppet Christmas special from this year: Nathan Lane gets a tricycle, which, sadly, we don’t get to see him ride. Pepe gets an opera voice, which should really come in handy when they get around to making The Muppets’ Gotterdammerung. Claire’s letter to Santa, the plot device that drives the whole special, is simply to spend Christmas with all her Muppety friends.

Score: 8.5/10. Claire lives in the same building as the Muppets, so she gets to see them every day anyway. So I was going to rate this one pretty low… but then I got to thinking, How great a present would it be to have the Muppets come to your house on Christmas Eve? It would blow 1987’s ThunderCats Cat’s Lair playset out of the water, that’s for sure.

The gift: Big Bird gives Leslie Uggams a hat that everyone hates

This is the little-seen Sesame Christmas special (Danny wrote about it on this site a while back) in which Leslie Uggams is inexplicably hanging out on Sesame Street on Christmas. The humans all chip in to buy her a present, and they entrust Big Bird to pick it out, which is a pretty terrible idea. Was he established as being six years old back then? I wouldn’t want a six-year-old picking out my present. Anyway, Leslie doesn’t even pretend to like the hat, but she turns it into a cue for an inspiring song about really crappy Christmas presents.

You know the story. The otters have noble gift-giving intentions, but each of them sacrifices the other’s prized possession, then they both lose the talent contest, so they don’t make any money, so they can’t buy any presents so they did it all for nothing. But they still have each other… and then there is that happy ending. Hmm.

Score: I can’t decide. What do you think?

The gift: Santa Claus gives Thog and Thig a toy truck and a teddy bear, respectively.

In this very first Muppet Christmas special, the guy who played Ed Norton on The Honeymooners teaches two naked, monstrous beasts that Christmas is all about giving toys away without expecting anything in return. Rumor has it that Thig was so touched by this lesson that he quit the Muppets and became the head of the Salvation Army.

A tiny rock is just about the cheapest, most worthless gift you could ever give… but when it’s changing hands between the two cutest Muppets in the world in a gesture of selflessness, it seems a lot better than one of those XBox 3whatchamacallits. Besides, Grover seems genuinely touched to receive it, and he’s not one to fake sincerity. This gifting also happens to connect three different Muppet worlds, which is the point of the whole special.

Score: 10/10. The best part of the Fraggle pebble is that Grover can pawn it off on the first monster, rat, or chicken he sees, and rather than seeming ungrateful, he’s just following the tradition!

If only they used money on Sesame Street, this story never would have happened. Bert trades Mr. Hooper his paper clips for a soapdish for Rubber Duckie, and Ernie trades Mr. Hooper Rubber Duckie for a cigar box for Bert’s paper clips. Then Mr. Hooper gives everything back, which means he gets absolutely nothing from the whole deal except the satisfaction of selflessness, which, of course, is the true meaning of blah blah blah.

Of course, it’s not like he would have had much need for a used rubber duckie anyway. The really important thing here, though, is this: Is this the only time a grown-up human was ever seen in Bert and Ernie’s apartment? He looks very tall.

Merry Christmas and Happy Holidays, everyone! I hope you get presents that don’t suck!

Do you agree with my assessments? Disagree? Which ones did I leave out? Click here to talk about this article on the Tough Pigs forum!