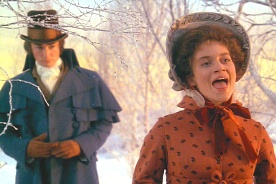 Christmas is rapidly approaching, and that can only mean one thing: It’s time to blow the dust off your copy of The Muppet Christmas Carol and sit down to enjoy a lovely adaptation of a classic work of literature, presented exactly the way author Charles Dickens envisioned it. Christmas Carol is a warm, funny, pleasant film with a lot to recommend it, but there is one major problem with it, and that problem is called “When Love Is Gone.”

There’s a scientific theory that states that every musical has to have one Boring Song. The Boring Song is a slow number, usually about some dull subject like love, during which the kids in the audience start fidgeting and the grown-ups’ attention starts drifting to more interesting thoughts, like 5.99% fixed APR financing. In Guys and Dolls, it’s “I’ve Never Been in Love Before,” in the film version of Grease it’s “Hopelessly Devoted to You,” and so on, and in Christmas Carol it most definitely is “When Love Is Gone.” The whole movie grinds to a screeching halt as Belle, a character we don’t know very well, stares into space and sings about how she and Scrooge used to be in love but now they’re not and boo hoo hoo. Oh, and there are no Muppets onscreen for the duration of the song, which lasts about 4 minutes.*

But hey, the good news is, you don’t have to sit through it. With that in mind, I hereby present 27 Things to Do During “When Love Is Gone.”

-See if you can drink hot chocolate through your nose.

-Build a snowman in your living room.

-Draw on your TV screen so it looks like Belle has a goatee and antlers.

-Stand on your head and say, “Belle! Whut in tarnation are you doin’ hangin’ from the ceiling?”

-Balance your checkbook on your nose.

-Try to name all the Muppet Show guest stars in alphabetical order by middle name.

-Flip through your copy of the original Charles Dickens Christmas Carol until you find the page where Bob Cratchit goes ice-skating with penguins.

-Give yourself a tattoo of Michael Caine.

-Catch up on the Tough Pigs forum.

-Browse the IMDb message board for Muppet Christmas Carol, which includes this thought-provoking inquiry: “You know how in the original story of A Christmas Carol, there is only the ghost of Jacob Marley and he doesn’t have a brother? Obviously, they altered this for the movie in order to have Statler and Waldorf in the role. What I just noticed is the name that they give the new character… Robert Marley, which was also the full name of singer Bob Marley. I wonder if it’s just a coincidence or if the filmmakers did it on purpose?”

-Leave your own review on IMBb, in which you explore the deep socio-political metaphors inherent in the “light the lamp, not the rat!” scene.

-Read the back of the DVD case out loud in the manner of a lucha libre wrestling announcer.

-Put some hydrogen peroxide on that before it gets infected.

-Clean the octopus tank. (Applies to octopus owners only.)

-Read Danny and Kynan’s My Week with The Muppet Christmas Carol article from a few years back.

-Have a contest with your friends: As the scene goes on, bellow the word “BOOO-RING!” and see who can go the loudest and draw it out the longest. The winner gets to sing a duet with Michael Caine.

There you have it. Try any of these suggestions, or ALL of them, and the song will be over before you know it. Merry Christmas!

*It’s interesting to note that, as it’s explained on Muppet Wiki, the song was cut for the American theatrical release of the film. It was later restored for home video. Why? Only Brian Henson and the Ghost of Christmas Past can say.

Click here to discuss this article on the Tough Pigs forum!