And now let’s continue our look back at some of Tough Pigs’ greatest hits, begun in this post.

Here’s what the front page of Tough Pigs looked like shortly after its first anniversary (As before, click to see more of it):

When the site turned one year old, Danny was in a good groove, watching Farscape and contemplating whether Kermit’s Swamp Years was too cute.  The Muppet news we were all talking about included rumors of a new Muppet TV show (Wow!  That’s totally gonna happen!), Hot Topic’s Muppet underwear (Yowza!), and the latest waves of Palisades Muppet action figures (At long last, a Lew Zealand figure!).

In September 2002, Danny managed to get his hands on a copy of a Muppet Movie screenplay draft that included loads of stuff that didn’t make it into the final film.  “The Road to Hollywood” is perhaps the most fascinating Anthology entry, although I can’t help but get a little depressed knowing we could have had a Henry Kissinger cameo.

In October 2002, Danny began another Tough Pigs tradition, as he scoured the internet for photos of assorted people wearing Muppet costumes for the first “Muppet Fan Halloween Parade.”  In that first parade, Danny offered to mail candy to anyone who sent him a picture of themselves in costume.  I just hope he didn’t send anyone any licorice jellybeans… Those are gross. 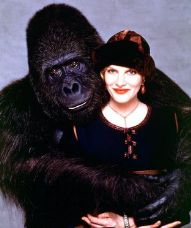 In November 2002, General Mills gave away DVDs on cereal boxes, resulting in thousands of hapless consumers pouring milk on the discs and eating them.  Danny, on the other hand, bought the three Muppety titles and reviewed them for “My Week with Muppet Breakfast.”  He gave it a valiant attempt, but ultimately failed to enjoy either Lucky Charms or Buddy.

At the end of November, Muppet fans everywhere turned on their TVs at the same time to watch It’s a Very Merry Muppet Christmas Movie, a holiday film whose title takes up 2/5 of a Twitter post.  Danny’s review of the film focused largely on the fan fervor that followed the film.

In December 2002, Danny and Kynan combined their powers of wisecrackery for “My Week with Christmas Vacation,” the first of many awesome team-ups.  Finally, Robert Downey Jr., Martha Stewart, and John Denver got the beatdown they deserved.

In January 2003, Tough Pigs readers received a transmission from the future!  In “Tough Pigs 2027,” the Danny of the future greeted us from a world where Lamchop-Segway Industries had purchased the Henson Company and elevated Pino, Tommie and Ienieminie to the heights they deserved.  According to future-Danny, the “Dutch Economic Miracle” will happen any day now. 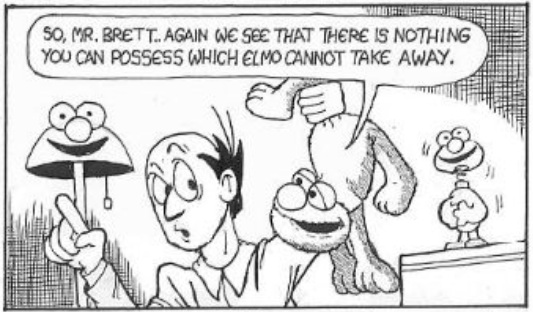 Our pal Chris “Smig” Smigliano has long been the Tough Pigs house cartoonist, and in 2003, he and Danny brought us a terrific comic strip, which we didn’t realize we had all been waiting for.  Playing with Dolls was full of “It’s funny ’cause it’s true!” moments for Muppet geeks… and looking back over all the strips, I just realized Smig is really good at drawing Muppet toys.

In March 2003, Danny (with some research help from a few TP friends) compiled what was, at the time, the most impressive attempt to unravel the mystery of Grover’s mother and her ever-changing identity, in “GroversMom.com.”

In May 2003, the Tough Pigs gang convened for the first Muppet Book Club.  Our inaugural text was Cookie Monster and the Cookie Tree, which of course is a profound treatise against Socialism.  Or a cautionary tale on the dangers of addiction.  Or a book with a scary witch and a talking tree.

In June 2003, Danny wrote one of the most impassioned Tough Pigs articles ever: “The Poseur,” in which he railed against the flat-faced photo-poser Kermit whose use on various merchandise items was running rampant.  His proved was so effective that… well, actually we’re still seeing stuff with the flathead Kermit, so I guess the Muppet marketing people just don’t know how to read.

And then a world hungry for knowledge demanded more information on Grover’s mother, so ToughPigs.com obliged with June 2003’s “My Week with Grover’s Mom.”  That’s right — five days of exhaustive analysis of the monster our favorite monster calls Mommy.  It was quite an achievement, and as you know it led to the establishment of the Grover’s Mom Research Foundation, which remains the world’s leading foundation for researching Grover’s mom. 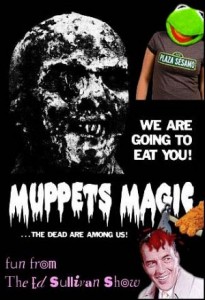 We were pleasantly surprised to get the DVD compilation Muppets Magic from the Ed Sullivan Show, but we couldn’t help but notice that the cover art was… well… to put it politely, it was incredibly off-putting.  So Danny ran Tough Pigs’ first photo-editing contest, September 2003’s “Nip/Tuck.”  This cover by Scott Hanson still cracks me up.

Hey, remember that crazy rumor that persisted for years saying Disney was planning to buy the Muppets?  Man, that was ridiculous.  And then remember when it actually happened?  We found out about it in February 2004 — a search of the forum reveals that my own initial response was, “Whaaaaaat? Wuh! Eh? Hmm.”  Danny tried to make sense of the whole thing in a post called “So Here We Are.”  Reading it now, this bit stands out: “The fantasy that springs to mind, obviously, is walking down the street and a bus goes by and it’s got a huge colorful ad for THE MUPPETS DOING WHATEVER, the new movie COMING SOON TO EVERY THEATER YOU CAN THINK OF.”  That’s pretty much what’s happening with The Muppets right now, so maybe, just maybe, everything’s going to be okay.

Danny continued posting great stuff throughout 2004, but let’s skip ahead to September 2004.  It had been months since Disney bought the Muppets, but we still didn’t understand the name of the sub-division of Disney that was running them: Muppets Holding Company LLC.  Tough Pigs readers speculated about what it would be like to be a holding company, and answered the question “What Would You Hold?”

In November 2004, we Silly Creatures were delighted and a little bit shocked to get the first-ever DVD release of Fraggle Rock.  Danny documented his thoughts on the three-episode disc in “My Week with Fraggle Rock.” 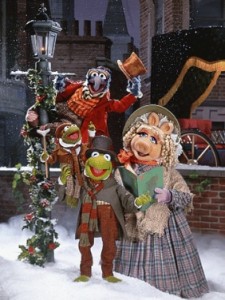 In December 2004, Danny and Kynan teamed up again, this time turning their brutally-honest-commentary powers on a genuinely beloved holiday classic, for “My Week with The Muppet Christmas Carol.“

As 2005 began, there wasn’t a whole lot of new Muppet stuff to look forward to.  There wasn’t even a lot of old Muppet stuff to look forward to… Instead of getting full-season DVD releases of Fraggle Rock, or any DVD releases whatsoever of The Muppet Show, we got a disc of Jim Henson’s Mother Goose Stories episodes.  As a Muppet journalist with integrity, Danny sat down to review it “in the interest of giving it a fair punch in the face” for February’s “48 Minutes with Mother Goose Stories.”

Ah, but then in May 2005, there was a brand-new Ashanti TV movie!  I mean, a brand-new Muppet TV movie.  It was The Muppets’ Wizard of Oz, and we all had a lot to say about it, which we did in “Two Things About Muppets Wizard of Oz.”

Muppet fans went through a pretty scary time beginning in the summer of 2005, when Disney held auditions for the purpose of casting multiple performers to play the major Muppet characters.  They even went so far as to recast Statler and Waldorf in the little-loved From the Balcony web series. (Having revisited it more recently, by the way, From the Balcony was actually not so bad… but with the wrong Muppet voices, it’s still pretty hard to endure.)  Seeing the urgent need to save the Muppets, Kynan Barker started a new website called SaveTheMuppets, which Danny wrote about in August 2005’s “Just One Kermit” editorial.  We sent the link to all our friends (in the pre-Facebook era, no less!), we sent letters to the Muppets Holding Company people, and we went to Disneyland to plead with Mickey Mouse to change his mind.

And you know what?  It actually made a difference!  With only one little hiccup I can think of (more on that in a future installment), all the core characters have been played by the core performers ever since then.  The internet works! 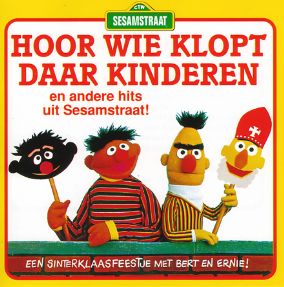 We got a swell stocking stuffer in December 2005, with of one of the all-time most interesting Tough Pigs Anthologies, “Santa Maybe.”  Tough Pigs’ own Jogchem Jalink translated an entire Christmas-themed Bert & Ernie record from Sesamstraat, the Dutch version of Sesame Street, into English, and the result is fascinating.  It’s like Bert and Ernie from an alternate universe.

You would think that Danny and Kynan would have run out of Muppet Christmas stuff to talk about, but to think that would be to severely underestimate how obsessed the Muppets are with Christmas.  Hence, December 2005’s “My Week with More Christmas,” featuring Bear and his big blue house friends and Kermit and his Fozzie’s-mom’s-house friends.

Click here to wonder whatever happened to Ashanti on the Tough Pigs forum!