Here at Tough Pigs, we were excited when Sesame Street, a new TV show featuring the Muppets, premiered last season. Personally, the show quickly won me over with its delightful mix of inner-city people, creatures, and educational content. But this morning I watched the premiere of the second season. Based on this first episode of the new season, the good times are over. Instead of sticking with what worked in the first year, the producers have decided to make all kinds of unnecessary changes.

First of all, there is no regard given to continuity. The show’s main set now has a tire swing, which is not only dangerous for children but also makes no sense. There’s no reason a tire swing would be added to this neighborhood. Still, if that were the only change, I’d probably be okay with it. But Oscar the Grouch, once a disgusting shade of orange, is now a visually pleasing green. As far as I can tell, this serves no purpose but to undermine his grumpy character. Even worse, the Muppet Ernie now wears a striped shirt. Last season, he was simply naked. I can only imagine this was done to discourage rumors that he and roommate Bert are meant to represent a homo-sexual couple.

I’m probably paying too much attention to the established characters anyway, as it looks like the show will be ignoring them in favor of a bevy of new ones. In particular, two new monster characters named Grover and The Cookie Monster are pushed heavily in the season premiere. Grover, a strange blue monster with oddly-placed eyes, appears in two sketches. The Cookie Monster appears in a whopping four. They even have one song together! It’s clear these fuzzy new characters are nothing but crass attempts to sell more toys. The producers are foolish if they expect me to care about these abominations. The fact is I never will, and neither will anyone else. 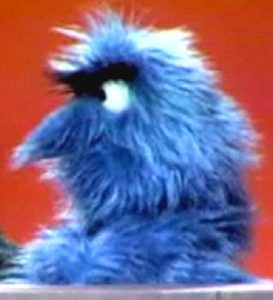 A third new monster, the hideous Herry, is performed by a puppeteer named Jerry Nelson. That’s right — last year’s team of three Muppet performers (Jim Henson, Frank Oz and Caroll Spinney) has been expanded. I haven’t seen enough of this Nelson fellow to judge, but I can pretty much guarantee he’ll never match up to the seasoned veterans. Still, he’ll probably get a bunch of toy-selling characters of his own before too long. The focus on these dull new Muppets will certainly lead to less emphasis on old favorites such as Big Bird, Mr. Hooper, and Buddy & Jim.

Speaking of Buddy & Jim, it looks like they have been replaced by a married couple named Larry & Phyllis. Buddy & Jim, with their hilarious Abbott-&-Costello-style antics, were my favorite part of the show last year. This new pair simply sit on the couch and act like rather unintelligent children. If this is the type of Sesame Street sketch future generations of children will grow up to imitate, I want no part of it. 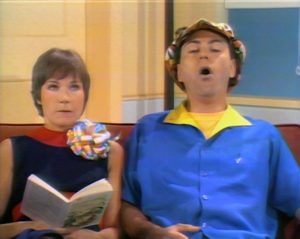 Larry is played by Alan Arkin, the star of Inspector Clouseau. This leads me to another way in which Sesame Street is ignoring its original goals– a ridiculous number of guest stars. In this premiere alone, we see Carol Burnett, Bill Cosby, Laugh-In‘s Arte Johnson, and the entire cast of Bonanza. The show used to be focused on teaching kids and developing lovable characters of its own. Now it seems to be more concerned with showing off how fashionable it is among TV stars. It saddens me to see the show selling out in this way.

Another way the season premiere lowers the standards of the show is by resorting to tired references to popular culture. We got a bizarre detective character named Sherlock Hemlock, played by this upstart Nelson, who seems to be replacing Bert as Ernie’s new comedy partner. I have to wonder what crimes poor Arthur Conan Doyle ever committed to deserve this shoddy “tribute”? 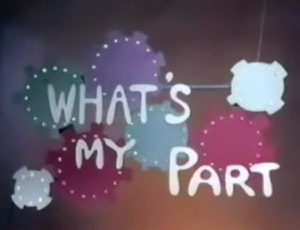 Then we got a simply awful game show “parody” called “What’s my Part?” in which a panel with names such as “Arlene Frantic” and “Bennett Snerf” tried to guess the identity of a body part. Kids who see this will simply be confused, especially since the panel also includes another gratuitous appearance by The Cookie Monster. Worst of all, the host was a bland humanoid Muppet named Guy Smiley, performed by Jim Henson. If that name is supposed to be a pun, it isn’t funny. And if the show keeps wasting Henson’s time with nonsense like this, I doubt he’ll ever have the time to play Kermit the Frog again.

Despite all of these distractions, the show has also decided to expand its curriculum. Last year, we were only taught to count to 10. This year the show is attempting to take us all the way to 20. This is a mistake, of course, because kids who have their brains stuffed full of Carol Burnett, tire swings and the Cookie Monster probably won’t be able to count to two, let alone twenty. If the show continues to go down this terrible new path, I can only predict that it will be cancelled before too long.

Click here to discuss this article on the Tough Pigs forum!

An Interesting Article About a Sesame Halloween Special

A Celebration of Him