Muppet fans dressing up as Muppets is the second-best thing about Halloween.  (The first being candy, of course.)  Honestly, I can’t even think of anything else to bother getting excited about on October 31st.

We’re continuing our long-lasting ToughPigs tradition of collecting and posting some of the best Muppet, Sesame, and Henson costumes from the holiday season.  Actually, this is the tenth ToughPigs Halloween Parade, which equals exactly a giant heap-full of ping pong ball eyes, polka dotted ties, and curved blue noses.  If you want to check out some of those Parades, click on the links at the top of this article.

Enough of all these boring words, let’s get to the awesome pictures!  And as always, give them a click to embiggen. 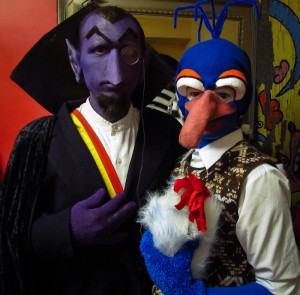 To start us off, we have these two fine gentlemen.  That’s easily the creepiest Count I’ve ever seen outside of fan art.  And bonus points go to that Gonzo, who thankfully went the “sweater vest” route rather than “chili pepper shirt”.  But mainly, these two impressed me for their realism.  You can totally imagine them walking down the street, though you’d probably cross to the other side to avoid them. 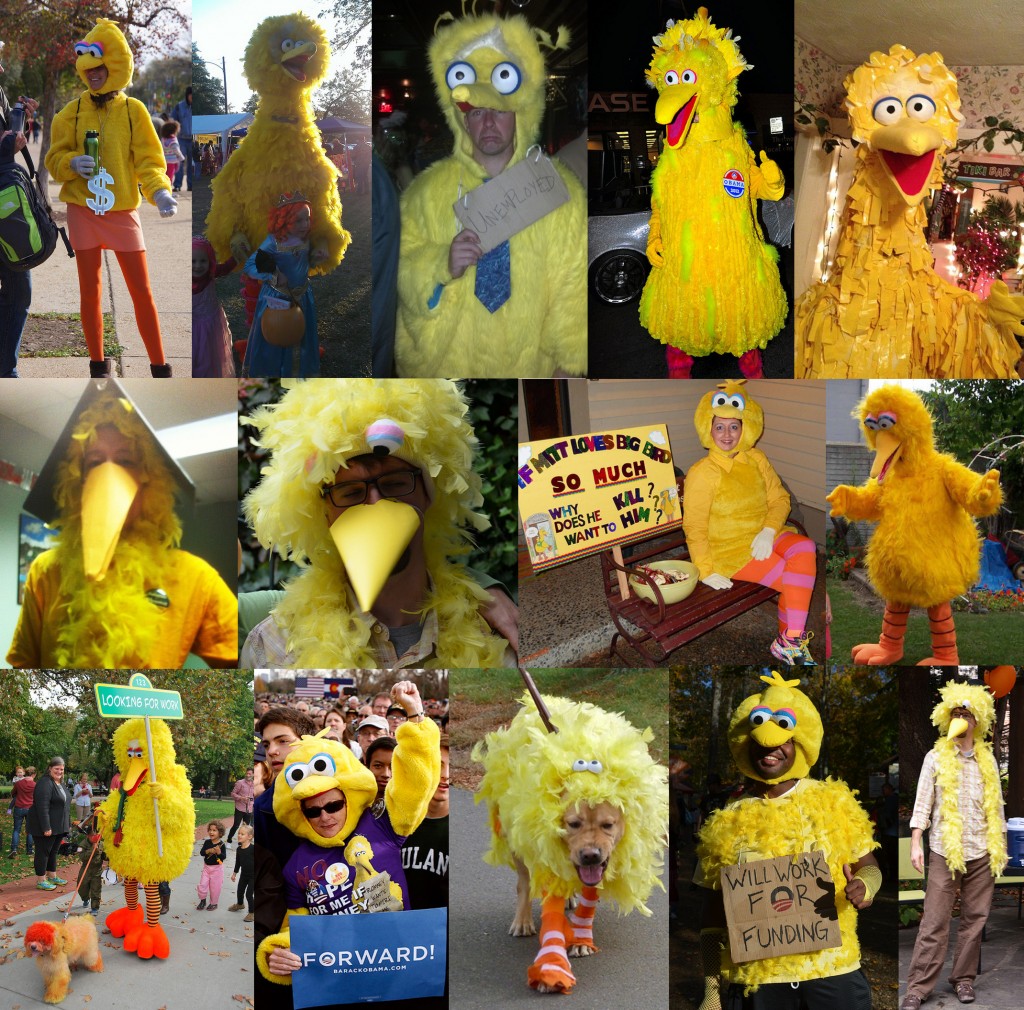 Thanks to Mitt Romney’s love/hate relationship with the bird, the costume du jour (I don’t know how to say “year” in French) was Big Bird.  Big Birds were decked out with protest signs, Obama shirts, dummy Romneys, binders, and the one in the bottom right corner even brought along his own miniature Barkley.  It’s too bad Romney didn’t call out someone like Farley or Roosevelt Franklin, because I would’ve loved to have seen more costumes of those guys. 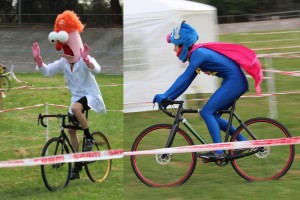 Apparently Beaker and Super Grover entered a race to declare a winner after their contest to see who has absorbed more pain ended in a tie. 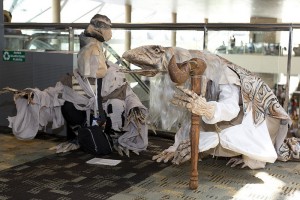 I spotted an amazing Skeksis costume at the New York Comic Con this year, but I was caught without my camera and I never saw it again.  But then I ran across this photo and discovered that he was teamed up with an equally amazing Mystic!  These costumes are absolutely worthy of the Jim Henson Creature Shop.  Next year, I hope they merge their costumes and cosplay as an UrSkek. 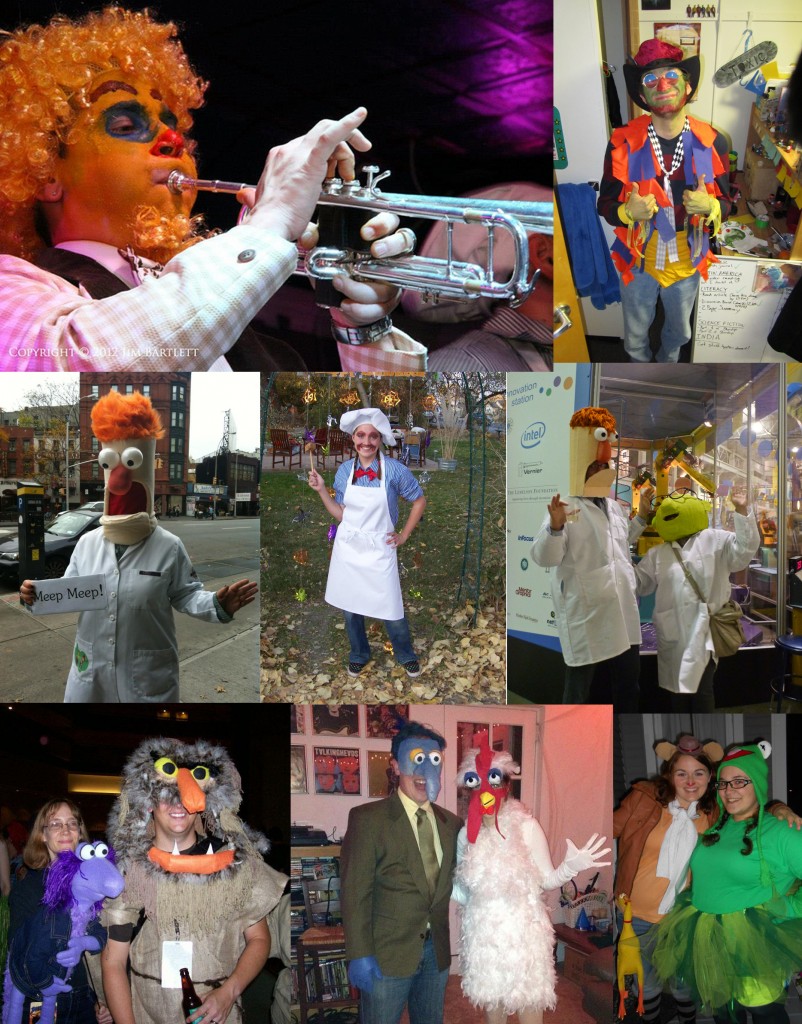 The Muppet Show gang always gets a lot of love during the Halloween season.  And I’m always impressed to see how different people try to recreate Gonzo’s nose, Beaker’s cylindrical head, or the Swedish Chef’s hands (you would be surprised).  I especially love that Sweetums (featured with our pal Kim and her Fraggle, Janken) and our other pal Evan as a particularly exuberant Dr. Teeth.  But the gold goes to the trumpet-playing Lips, who has not only completely blown my mind and impressed my face off, but he’s managed to dress as one of the more obscure Muppet characters with style and panache.  I bet he plays trumpet real nice too.

It’s easy to forget that this is the first Halloween since The Muppets came out, and I’m pleased to see that people still care enough to dress as one of the (very few) new characters.  I’m just wondering how that person managed to find such a perfect tiny powder blue suit.  (The Mary costume is pretty good too.) 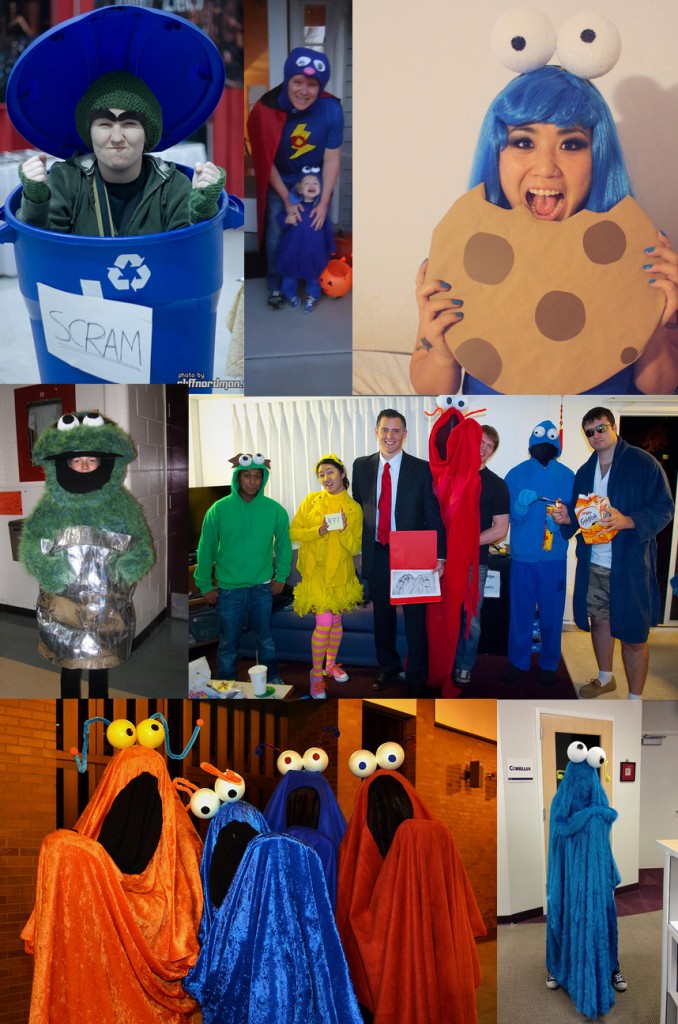 Sesame Street costumes can be easy.  Just pick a color, slap some giant eyeballs on your head, and you’re Oscar, Grover, Cookie Monster, or Elmo.  Add a prop or two and you’ve got your giant cookie or trash can.  Drape an old blanket over your head and act confused when you see everyday objects like phones or books and you can be a Yip Yip Martian.  See how easy it is?  There, now you have no reason not to make one of your own for next Halloween. 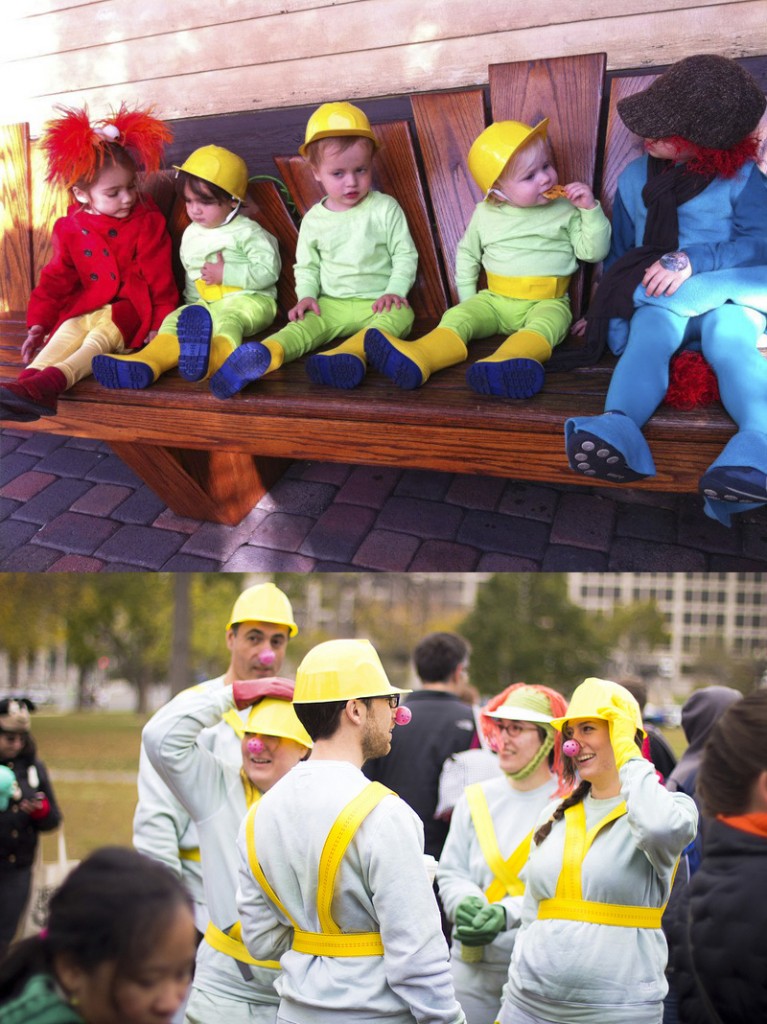 This is what happens when Doozers grow up.  (Note: That first picture comes courtesy of the Jim Henson Company, presumably the children of some Henson employees!  How neat is that??)

If you’re really interested in making your own Muppet costume, these two bloggers have provided instructions and details on how they were built.  Click here to read about how the Count was made, and click here to see how the Muppet gang came together (no Studebaker required). 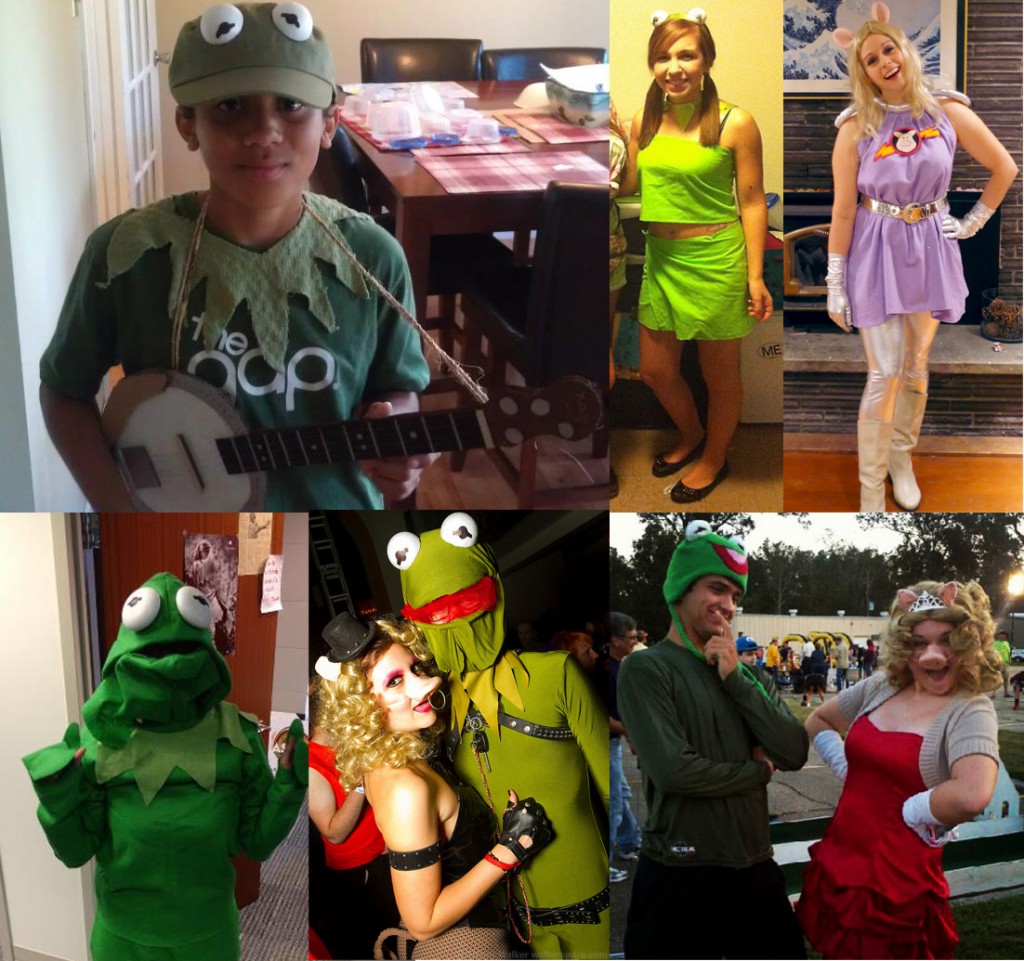 Kermit always gets a lot of love at costume time.  I’m always interested to see how people go beyond the ping pong balls and pointed collars and put their own spin on the frog.  People use hats with brims, winter caps, hoods, or heads of their own design.  There are t-shirts and body suits and swaths of fabric.  But these guys have their own banjos and bondage gear, thus cementing their roles in ToughPigs Halloween Parade history. 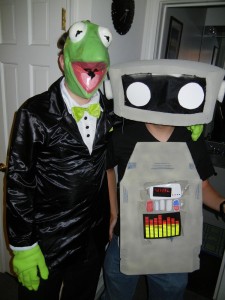 ToughPigs reader David Lu sent in this picture, featuring his 80s Robot costume.  You can’t tell from the picture, but the eyes actually light up!  What a tubular, gnarly, and even bodacious costume idea. 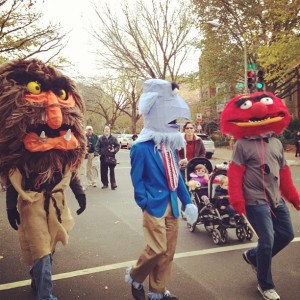 Recently, Muppet and PBS fans united in Washington DC for the “Million Puppet March”, encouraging our government to keep from pulling funding away from PBS.  So of course, there were lots of puppets, costumes, and all-around Muppet fans participating in the march.  We scoured through the photos and found this amazing trio, what with their oversized heads and right to protest.  Now come on, you can’t tell me you wouldn’t give these guys a few billion dollars worth of funding if you could. 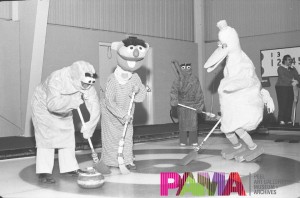 As you can imagine, this isn’t a recent Halloween photo, but come on.  They’re some terrifying-looking Sesame Street characters playing curling, the game of kings.  It’s awful and breathtaking all at the same time, and it involves my all-time favorite Olympic sport.  It’s pretty much the greatest image to ever grace the world of the internet. 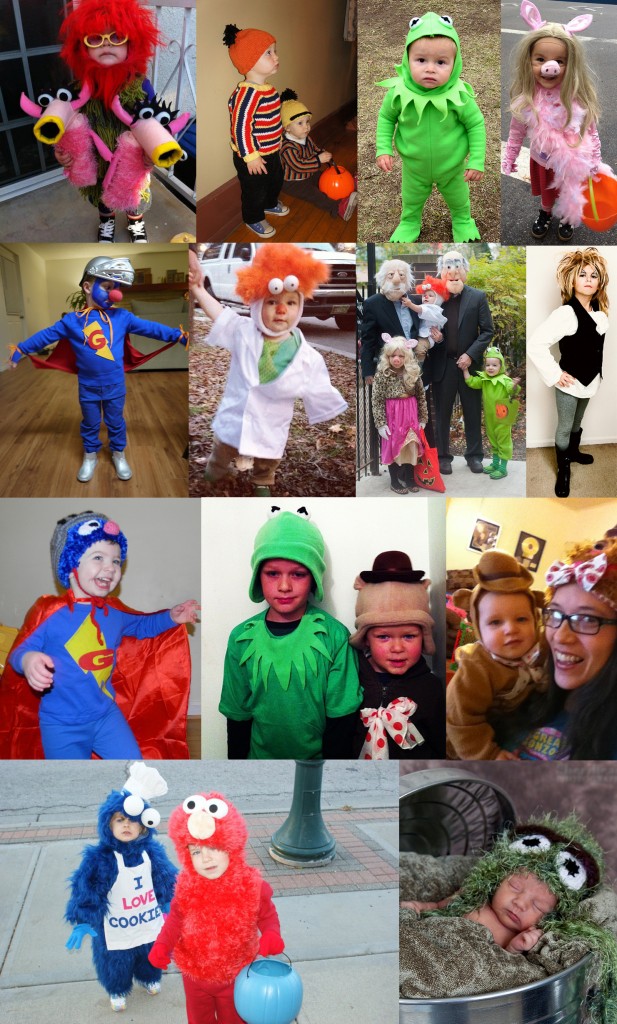 Grownups aren’t the only ones who get to reap the benefits of dressing as their favorite Muppet characters.  Sometimes, strange as it may seem, kids get into the game too!  Here are some of the best ones we’ve found, which also means they’re the most adorable little Muppet moppets you’ll ever see. 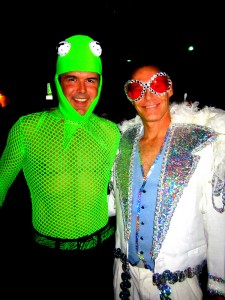 Here we have one of the most faithful recreations of episode 214 of The Muppet Show.  I mean, that’s how I remember it. 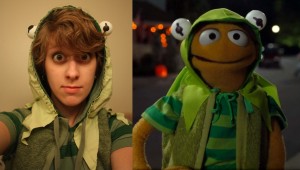 ToughPigs’ writer Julia Gaskill pulled off one of the best Muppet costume ideas, which I’m upset I didn’t think of first.  She’s Walter-dressed-as-Kermit from The Muppets, and as you can see, she got all the details down pat.  The striped shirt, wonky collar, and sideways eyeballs.  It’s Awesome Muppet Costume squared!

This year’s winners are David Pagano, ToughPigs’ own Matt Wilkie, and Abigail Maughan who decided to dress as Jim Henson, Frank Oz, and Karen Prell.  I think we can all honestly say that we’ve never seen a Karen Prell costume before.  The idea of dressing as a puppeteer is simple, yet effective, and these three did a great job at capturing their inner Henson employee.  It seems that anyone can dress as a colorful Muppet, but it takes someone special to dress as the people below those characters.

Many thanks to everyone who submitted pictures to the ToughPigs Halloween Parade!  Without you and your awesome costumes, our parade would be filled with naked Muppet fans.

Click here to dress as your favorite Doozer on the ToughPigs forum!