As we find ourselves at the end of another October, we discover that there’s something missing in our lives.  It’s not ghouls and ghosts.  It’s not the overbearing fear of eggs and toilet paper.  It’s definitely not an abundance of candy (I’m missing that one year-round).  It’s costumes.  And Muppets.  Muppet costumes, you guys.

Continuing one of the longest running traditions in ToughPigs history, we are proud to present the 13th Annual (Even Though We Missed a Year) ToughPigs Halloween Parade!  As we have since 2002, we’ll be showcasing some of the best, worst, and most ridiculous Muppet, Sesame Street, and Henson-related costumes, just in time for the Day of the Dead.

In recent years, we’ve waited until after Halloween to collect pictures of Muppet costumes, but for some reason, people seem to care slightly less when the Parade takes place in November.  So in the spirit of the season, we’ve been collecting images for the past year, just for this occasion.  If you’re dressing as a Muppet this Halloween, or if you spot any Fraggles, Grouches, or comedian bears while trick-or-treating, be sure to email them to us so we can include them in next year’s Parade!

And now, let’s get started with this year’s Halloween Parade!  Remember, give the images a click to embiggen. 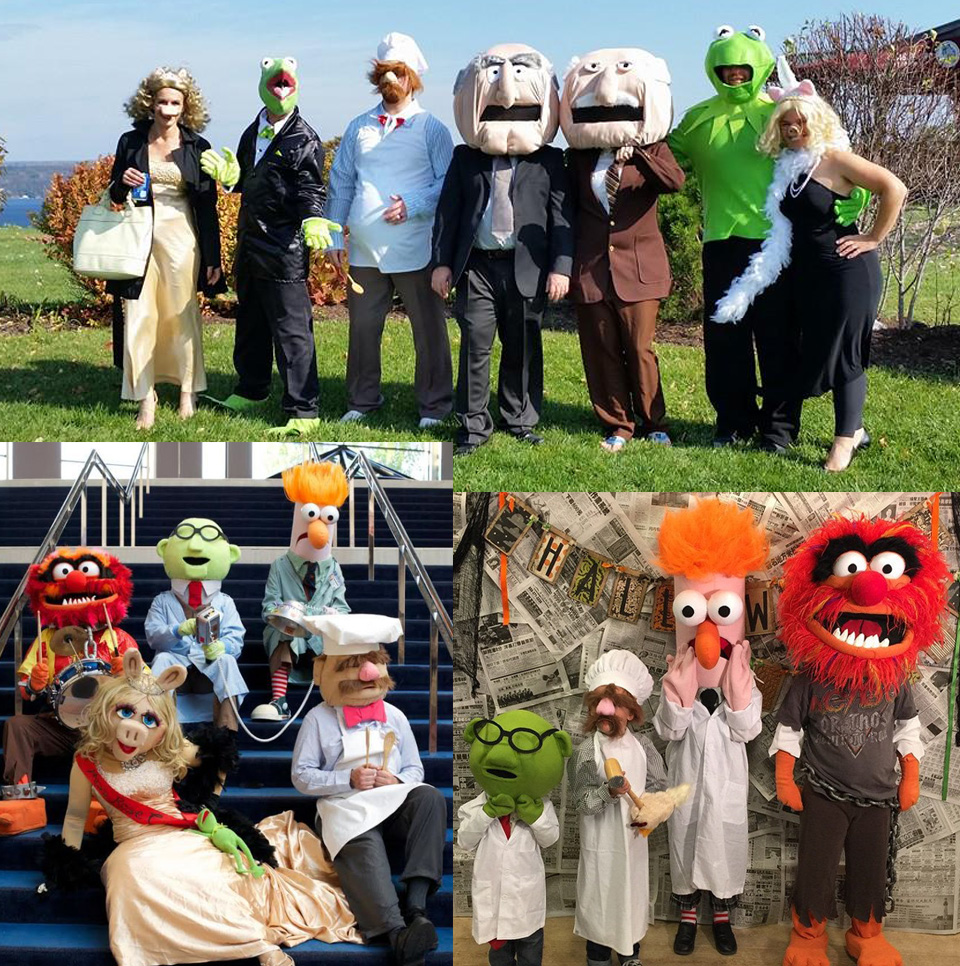 We’re starting off strong with the whole Muppet Show gang.  I appreciate the fact that the group on top has two completely different sets of Kermit and Piggy, although I can’t decide which is more disturbing.  The group on the lower left is extraordinary.  It’s like they made costumes to be used at Disney theme parks, only less terrifying.  But I mostly love the family on the lower right, with their incredible shrinking Bunsen and Swedish Chef.  Adorable!  And probably unintelligible. 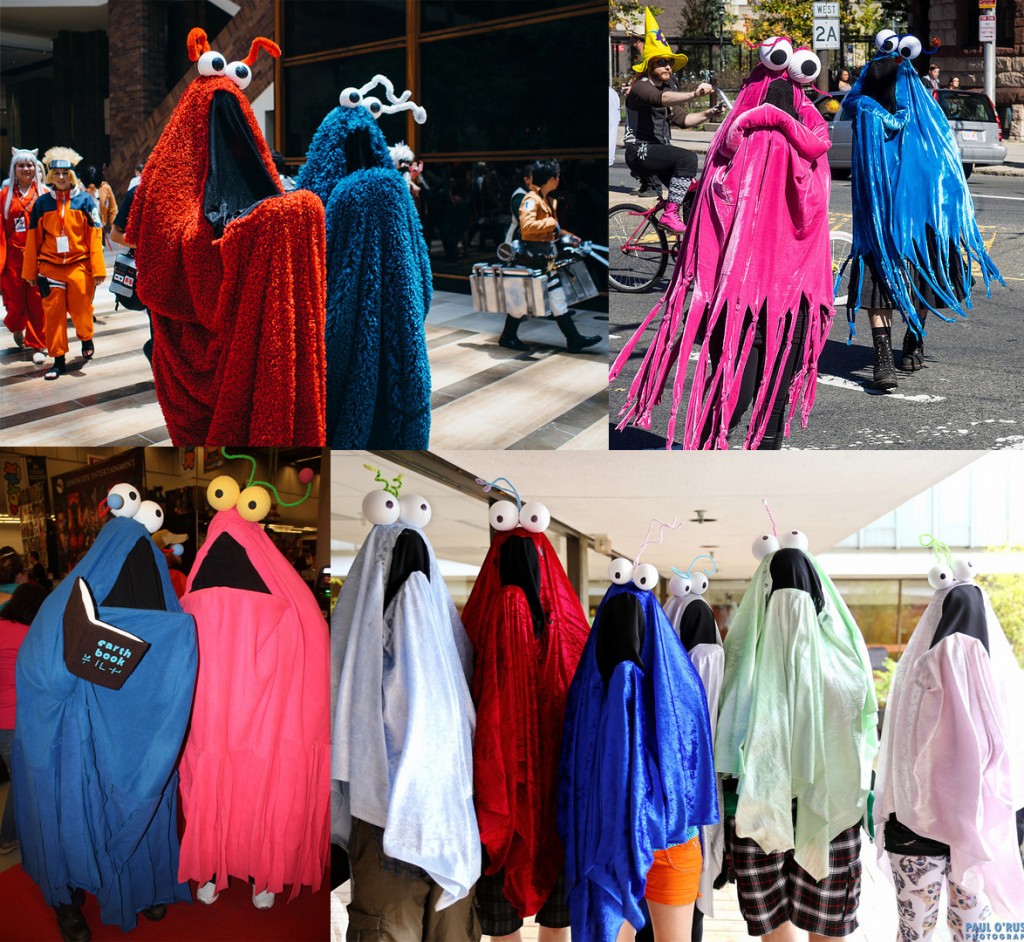 It seems that there are more and more Yip Yip Martians every year.  I guess it’s a relatively simple costume to make, assuming you have a blanket and some giant eyeballs you’re willing to part with.  Pro Tip: As the group on the lower right shows, make sure your blanket or sheet is actually long enough to keep everyone from seeing your human legs.  It’s a dead giveaway that you’re not actually a real martian. 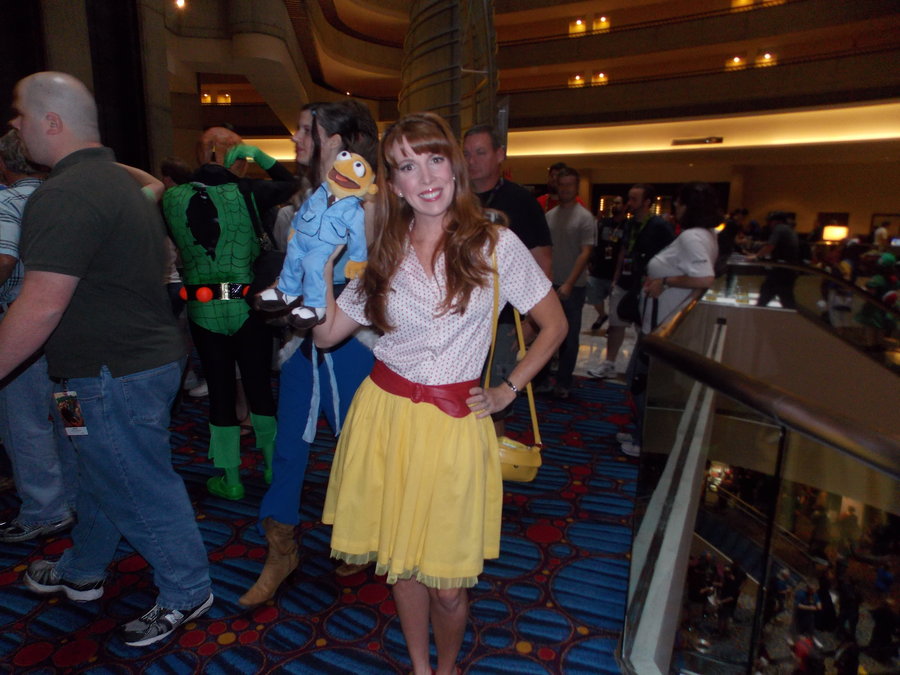 Great Mary costume!  It’s subtle.  So subtle, that if you take Walter away, it just looks like regular clothes.  Which is usually a sign of a bad costume, so I don’t know what I’m talking about at all.  I wonder if she’s got a thesaurus in that purse of hers. 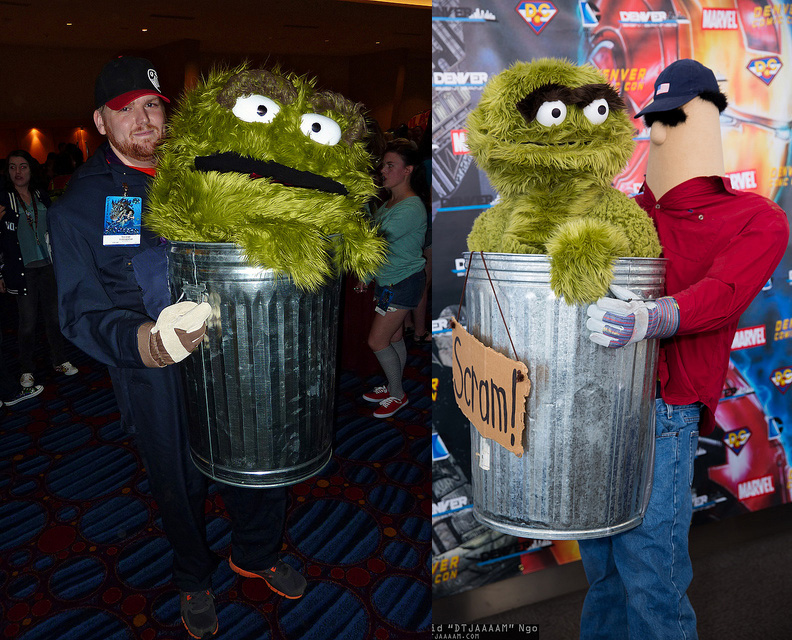 Here we have two very different methods for the old “Guy Carrying Oscar” costume.  (Aka: “The Bruno”.)  The gentleman on the left is puppeteering the Oscar through the false can, while the plain-faced guy on the right has his entire upper body in the Oscar costume.  Thankfully, both are authentic to the point of not showing us Oscar’s legs, which are still only an urban legend. 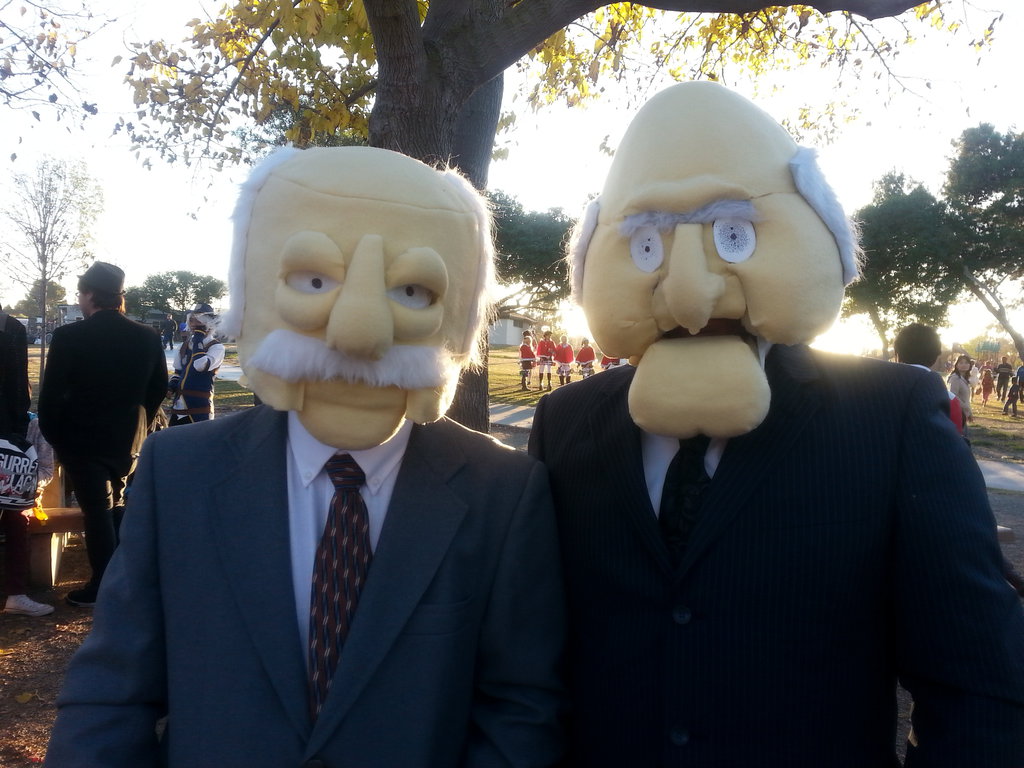 Props to the guys who made these Statler and Waldorf costumes, if only for including what looks like working mouths.  Without them, we would have no heckles, and that’s not only wrong, it’s unjust.  But negative props (Is that a thing?  I’m making that a thing.) for Statler’s hypnotic and disturbing zombie stare.  I mean, I get that the eyes probably need to be like that so the person inside can see, but at what cost??  At what cost???? 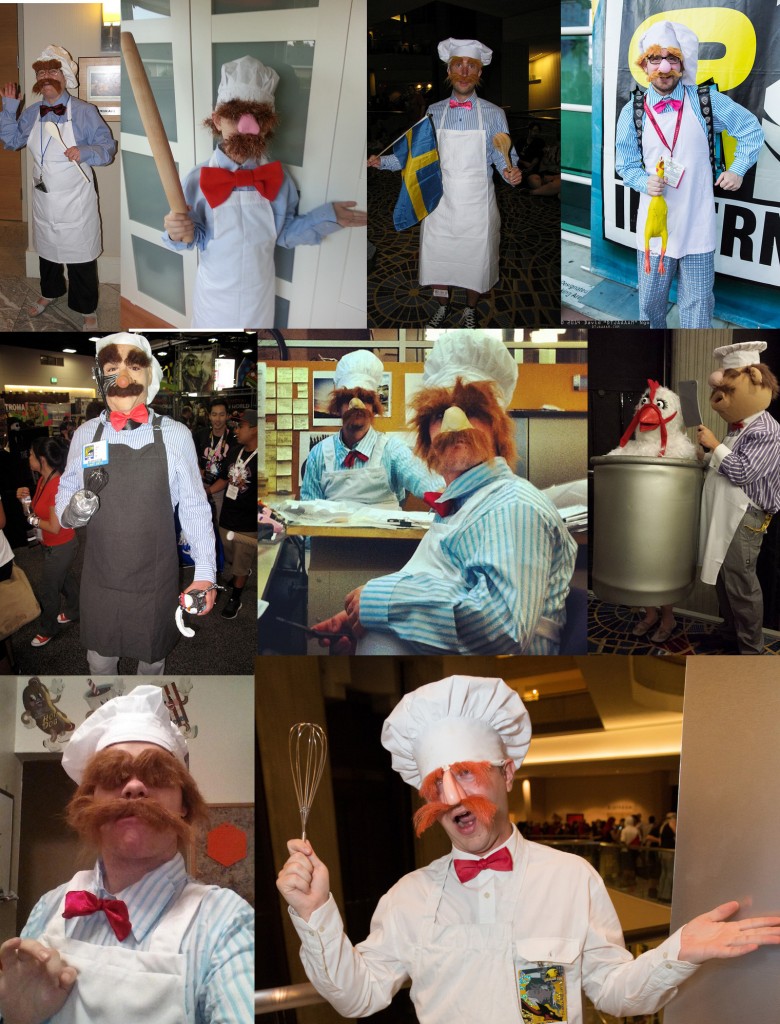 As always, The Swedish Chef is a popular costume choice, since all you need is an apron, hat, fake mustache, and the willingness to throw kitchen utensils.  I especially like the slight variations, like the “Bork Bork Borg” on the center left and the accompanying chicken in a pot on the center right.  That’s Chef done right. 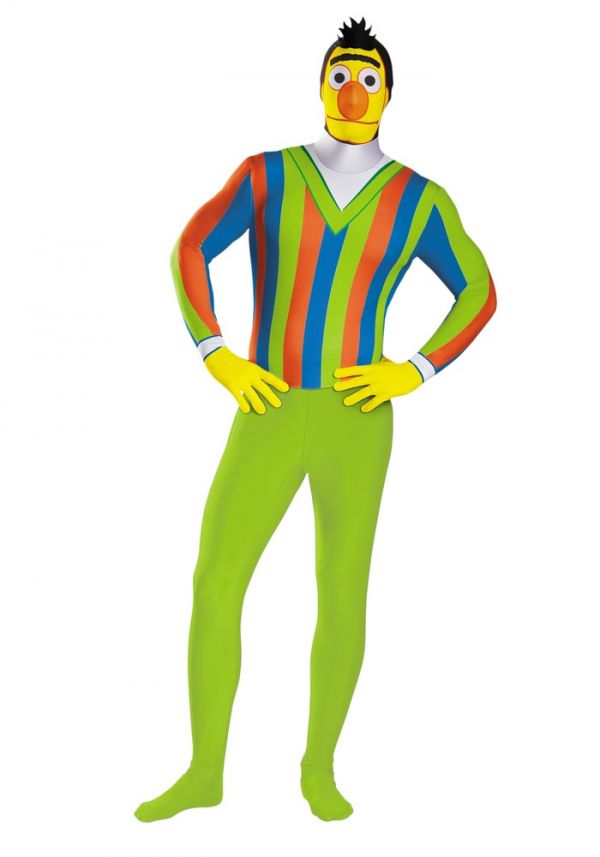 This is the Bert that nightmares are made of. 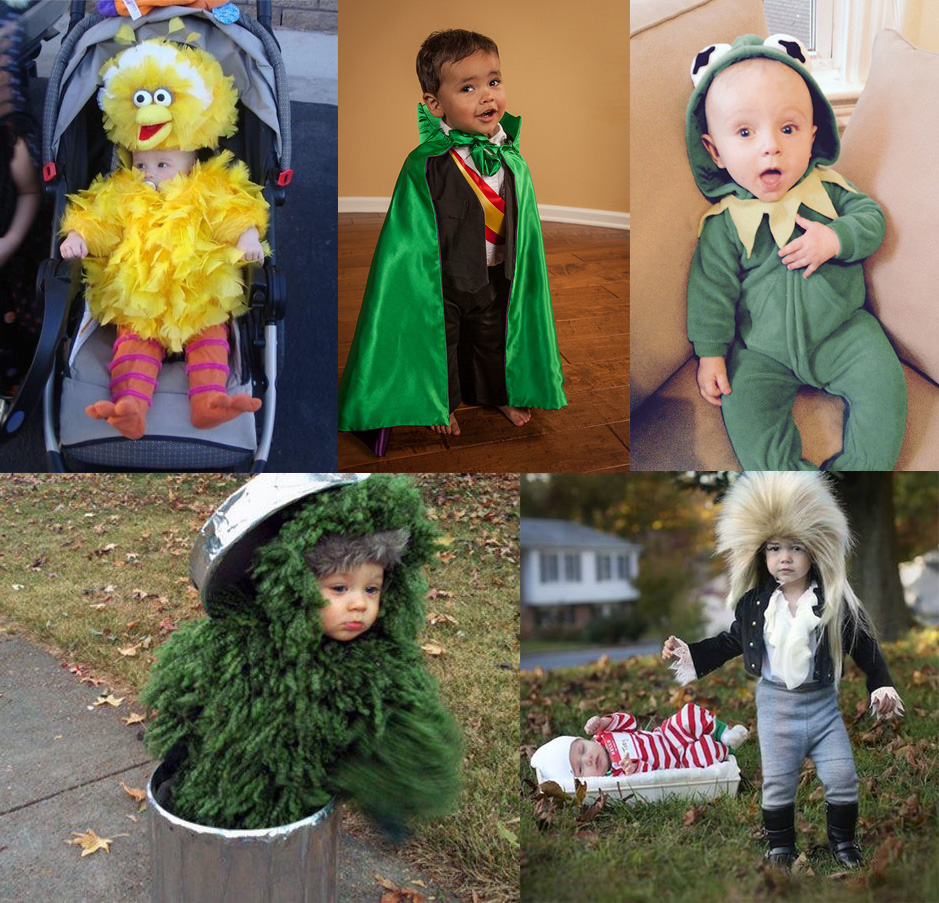 Oh yeah, I forgot that kids sometimes like to dress up for Halloween too.  Which one is your favorite?  The Little Big Bird with the three-toed feet?  The Tiniest Count?  Baby Kermit?  Oscar the Rugrat?  The Jareth/Toby Toddler Duo?  The correct answer is all of them.  They are all your favorites. 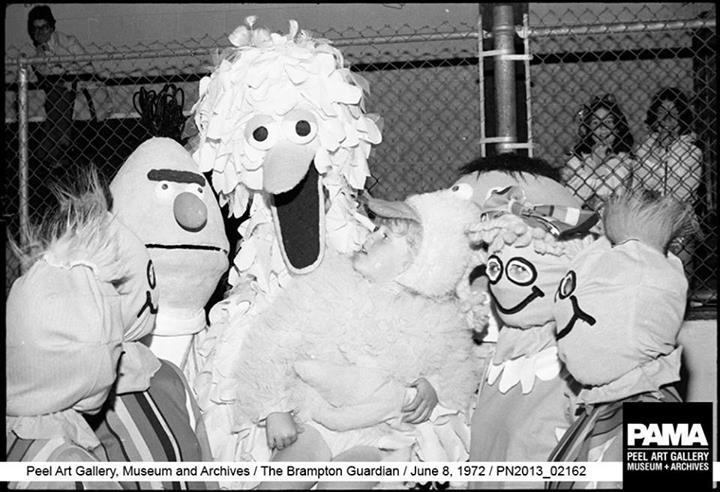 This is your annual reminder that we were not always so lucky to have pre-made store-bought costumes of our favorite popular culture characters.  This image, taken before the invention of color, includes Bizarro Big Bird and Bert and Ernie, as well as what I’m assuming are supposed to be Anything Muppets?  Or maybe the Fisher-Price Little People?  Or most likely a cult of mass murderers in disguise.  Let’s all give a little thanks for the fact that these costumes are now probably buried in an asbestos landfill so they can never harm anyone ever again. 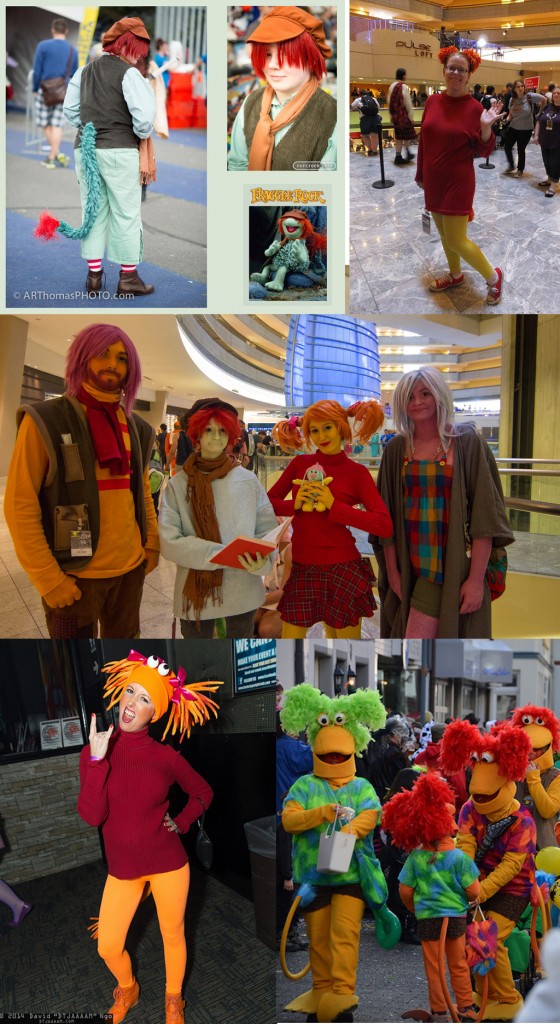 Fraggle Rock costumes are the best.  They can be simple or complicated, and they’re really hard to mess up.  The Boober on the top left is ToughPigs forum member Jessica, who really nailed what a human Boober would look like (albeit with a tail).  The group in the middle are amazing, what with their face makeup and almost perfect costume choices.  And I’m only assuming that the group on the bottom right are supposed to be Fraggles.  They could also be Snorks or Skrumps or some sort of humanoid traffic cones.

Admit it.  You want an Animal bike.  Of course you do. We all do. 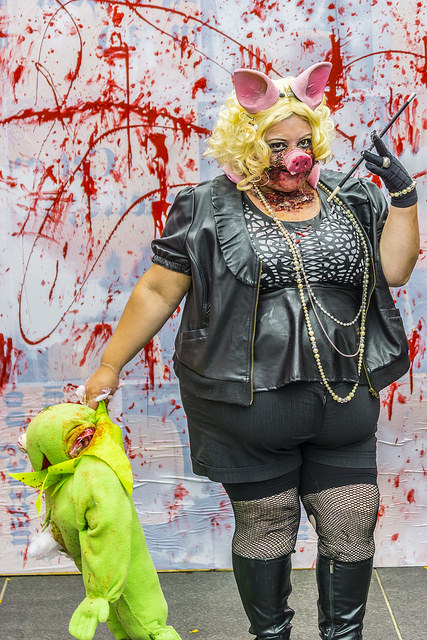 Oh good, someone thought it would be cool to make a Zombie Miss Piggy costume.  In no way does that ruin what is a great character beloved by children and adults of all ages in a desperate grab at banking on the popular horror genre of the moment.  These are the lies I tell myself to sleep easy at night. 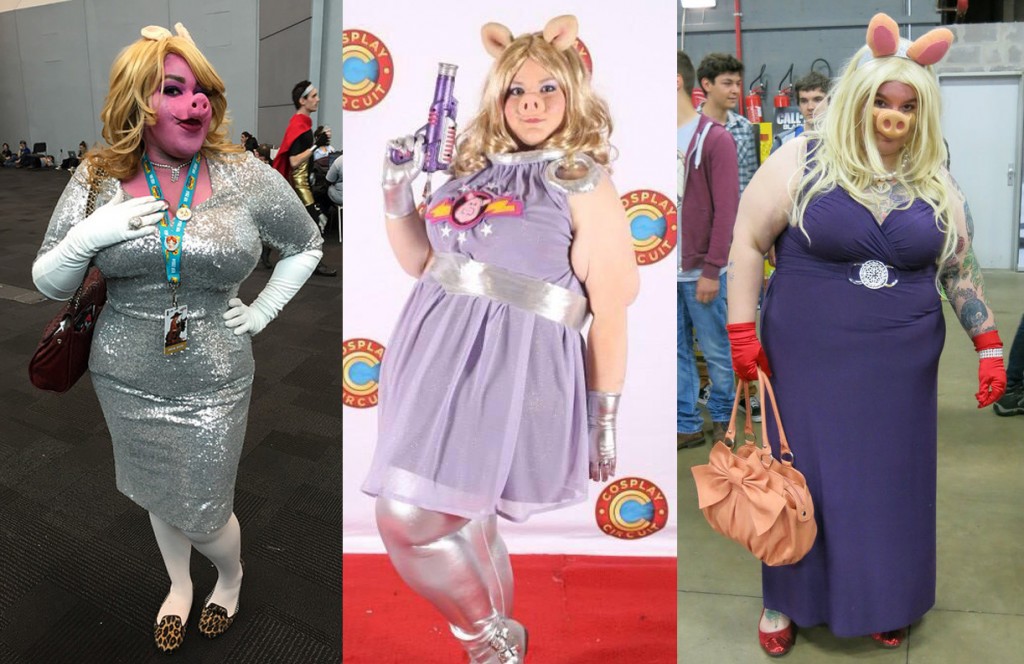 Ah, that’s much better.  Here are three ladies who know how the Divine Miss P deserves to be represented.  With glam, glitter, and optional ray gun.  No undead frogs necessary. 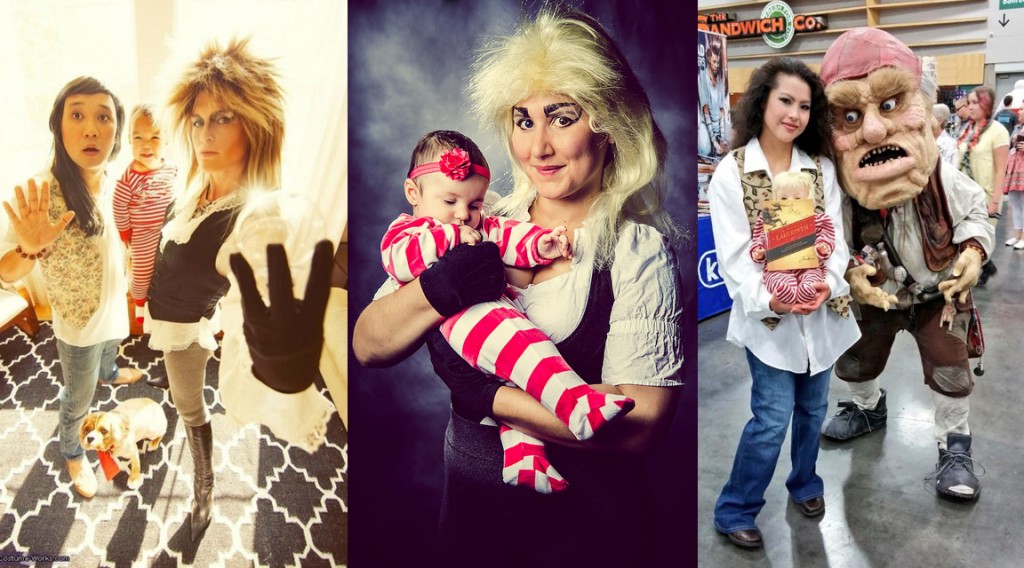 We usually see a lot of Jareth costumes, but these Labyrinth groups were the best of the bunch.  Between the great photography, paper mache Hoggle heads, and striped onesies, these families totally take the cake.  I’d say that they have the cunning to make it out of the Labyrinth safely, but I’d wager that they’d rather stay inside the Goblin Kingdom. 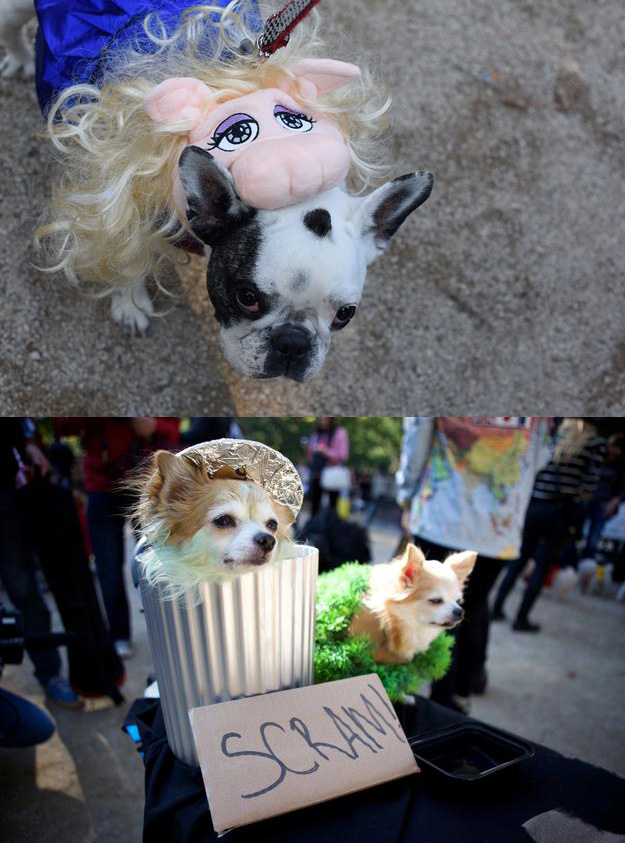 Dog costumes!!  No one is more upset that this dog is dressed as Miss Piggy than this dog herself.  The Oscars don’t seem to mind so much, but they probably love digging through the trash anyway. 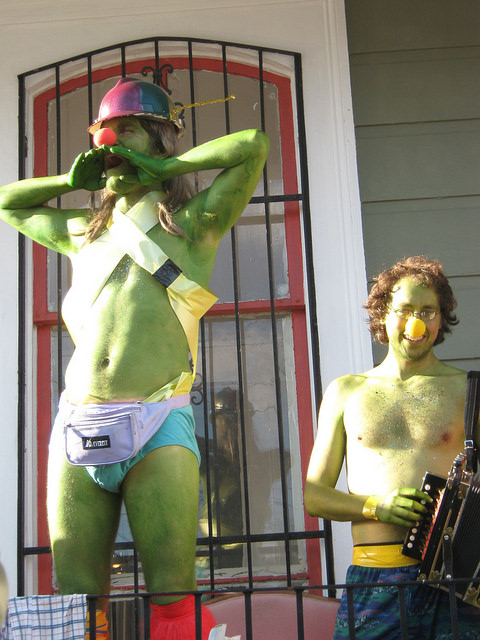 Yes, these are half-naked men in green body paint to look like Doozers.  Happy Halloween, everyone! 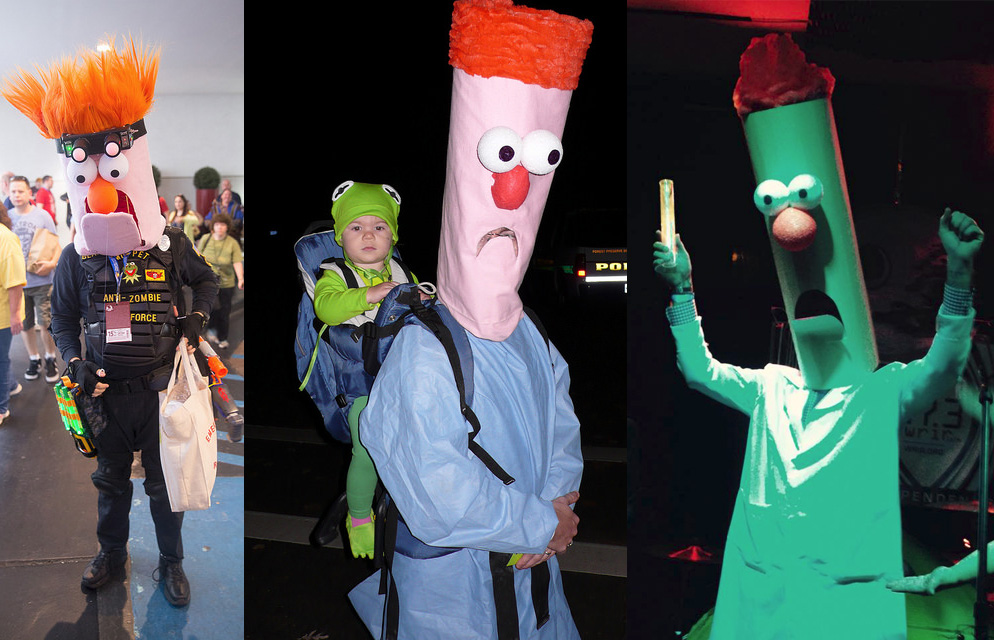 Ah, the many lives of Beaker.  Is he a zombie hunter?  Is he a single dad, just trying to bring his adopted frog son home in time for Thanksgiving?  Is he a raver (presumably from the “World in which Kermit was never born“)?  Is he an accident prone scientist’s assistant with a speech impediment?  Is he traveling the multiverse taking on an infinite number of personas in an infinite number of parallel earths?  No, just the fourth one. 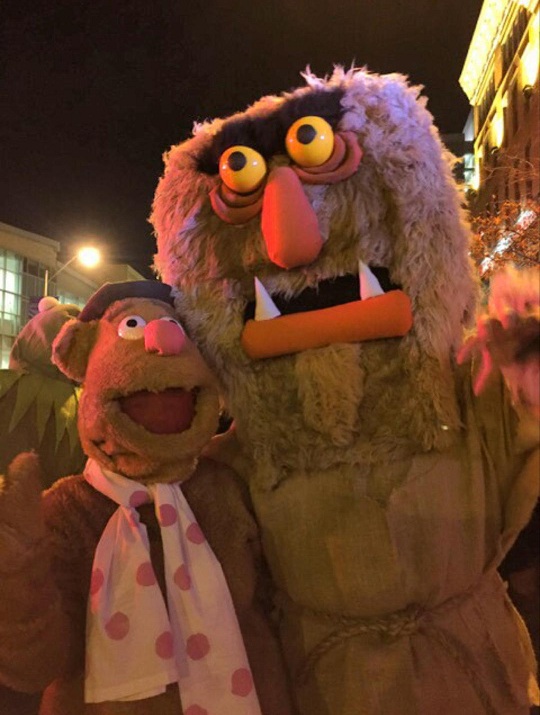 There’s a new Sweetums costume every Halloween.  They’re always amazing, and they’re always out there, just waiting for us to discover it and marvel at its hugeness.  But what we didn’t expect to find in this year’s Sweetums photo is what might be the best Fozzie Bear costume I’ve ever seen.  It’s so great, I want to throw a tomato at it.

When dressing as Jim Henson for Halloween, you have your choice of variants.  You’ve got your Classic Beard Jim, your Little Kid Jim, and even your Steampunk Jim.  Who knows how many more Jims there could be out there!  At least two more, probably! 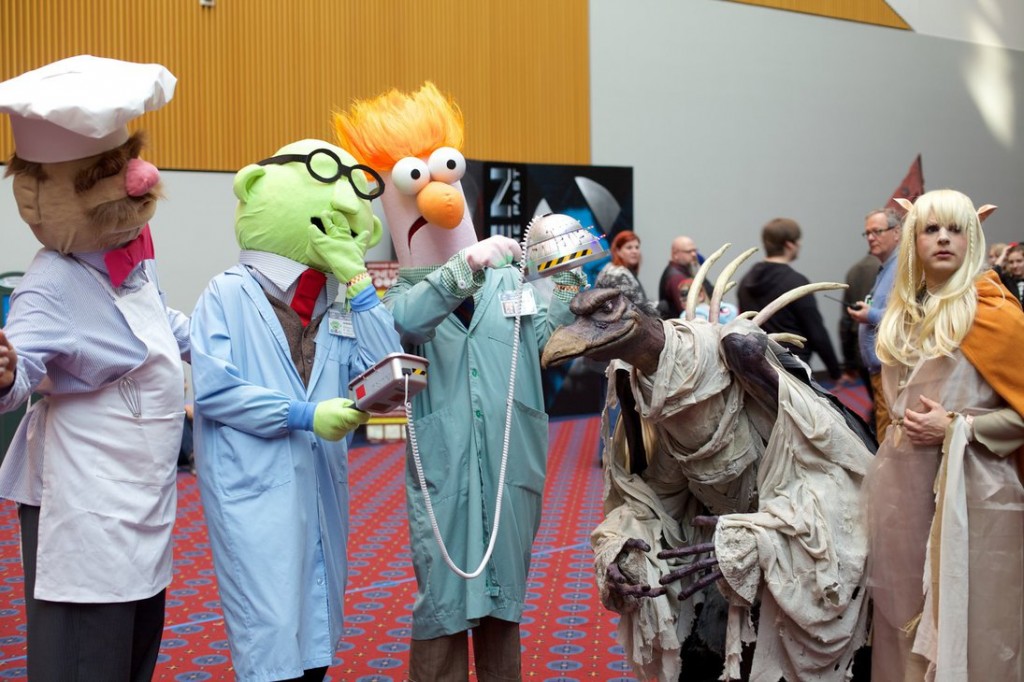 To be fair, I think these are the same Chef, Bunsen, and Beaker from the first image in this year’s Halloween Parade, but here they are with a Skeksis and Gelfling!  It’s a Henson Company reunion!  Hey guys, remember when you were all owned by the same company?  Good times… good times. 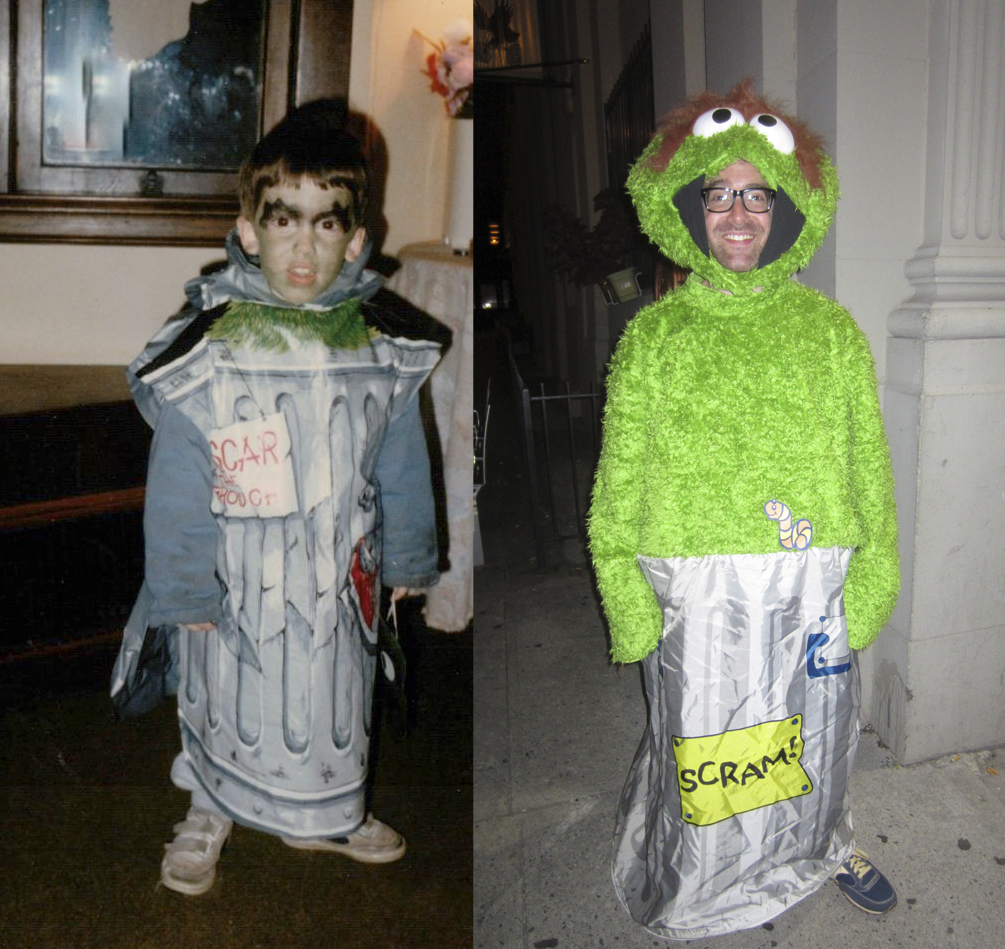 Hey, that’s me!  The tiny Oscar on the left is from when I was 4 or 5 years old.  The slightly taller Oscar on the right is from just last week.  And just like the real Oscar, it looks like I haven’t changed much at all in the past few decades. 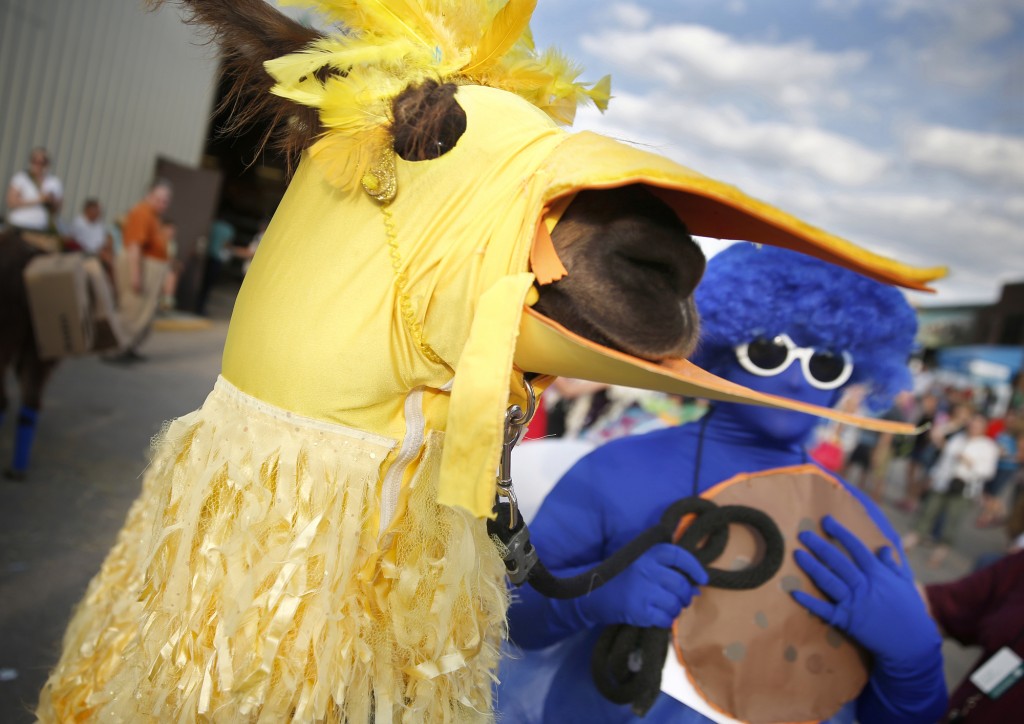 Yes.  That is a llama dressed as Big Bird, with his owner as Cookie Monster.  They were the winners of the llama costume contest at this year’s Minnesota State Fair.  These are the things I find myself Googling on a Saturday night instead of going to bars or raves or discoteques or whatever it is the (over 21) kids do these days. 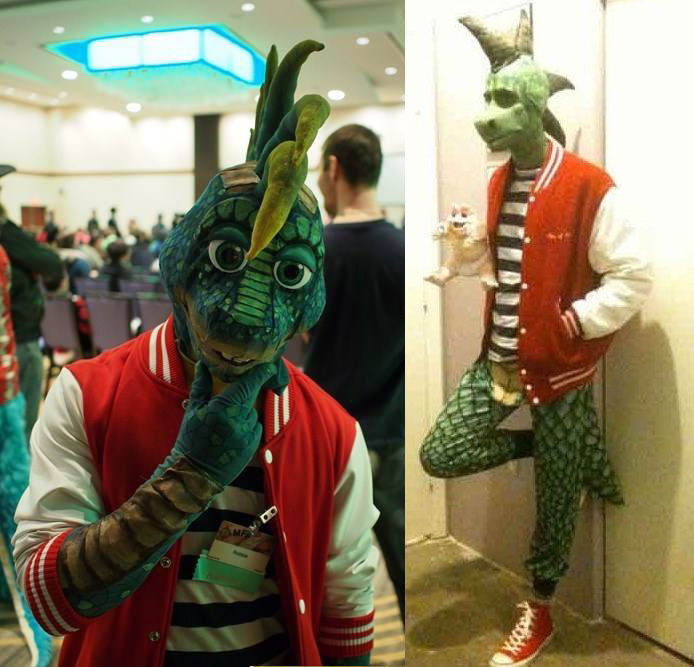 The runners up for my favorite Muppet-themed costume this year are these two guys dressed as Robby Sinclair from Dinosaurs.  (At least, I think they’re not the same guy.  It’s hard to tell, but the eyes and head spikes look different, while the rest of the costume looks identical.)  Not only is it amazing that someone bothered to build a costume based on a nearly-forgotten sitcom, but they did it so well!  You’d think dinosaurs were roaming the earth again!  Someone call Stephen Spielberg and get them onto the set of the Jurassic Park sequel! 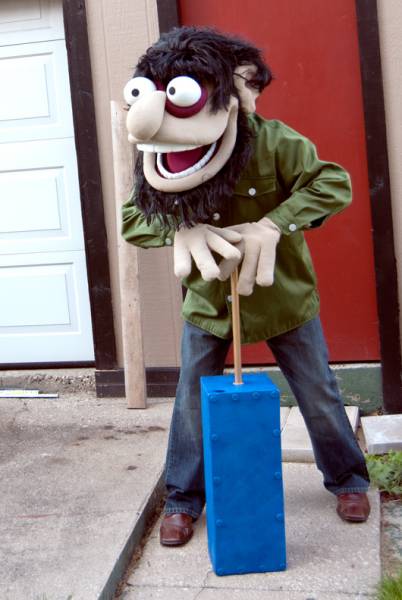 Last, but far from least, is the winner of this year’s Halloween Parade: Crazy Harry.  And look at that explosive costume!  He simply looks dynamite.  I bet he had a blast building it.  Maybe he got the idea from the Muppet Show comic book published by BOOM! Studios.  Or by watching a show on the TNT network.  Yeah, that costume is, most definitely, the bomb.

Click here to dress your llama up as the ToughPigs forum!