Happy week-after-Halloween, Muppet fans! It’s the beginning of November, and you know what that means! It’s time to get our cavities filled and to have the mass amounts of chocolate siphoned out of our veins because we kinda overdid it a little on October 31. But also it means that we have another round of the best/scariest/hideous/why-would-they-ever-wear-that??? Muppet costumes from this past Halloween!

And as always, give the images a click to see them larger than life. And believe me, that’s the only way to see some of these costumes… 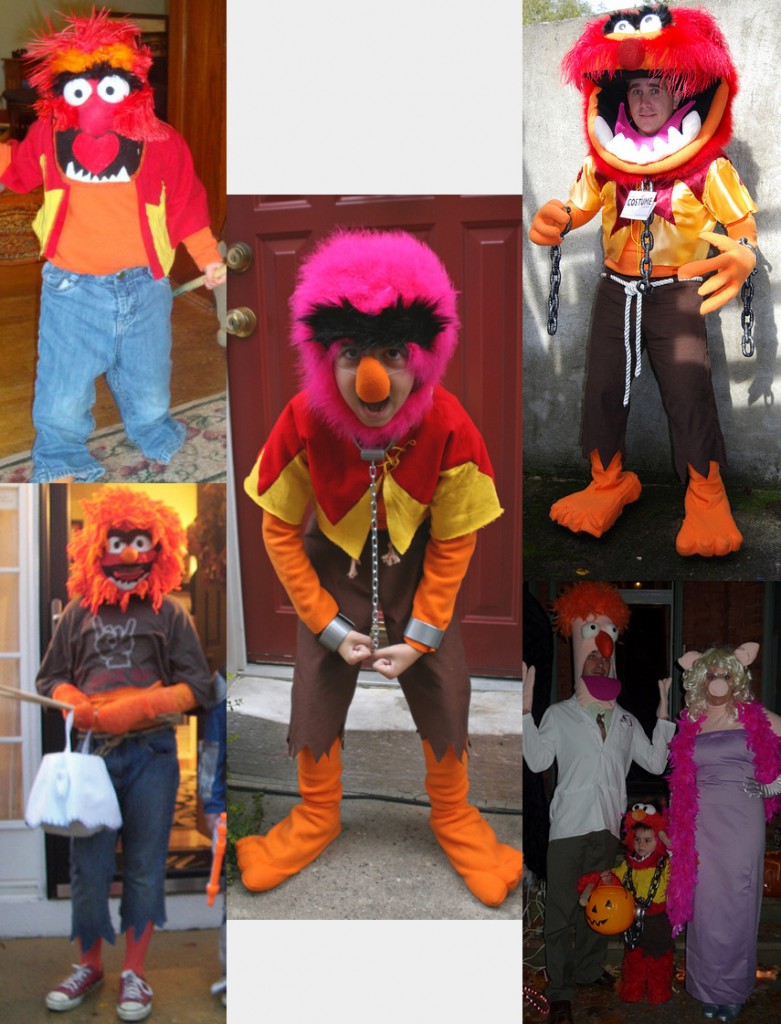 Animal was a popular costume choice this year. And just like every previous year, we’ve got a good mix of awesome and just plain awww. The Animal on the upper-right corner is my favorite, not just because he looks so similar to the puppet, but because it looks like Animal is eating that guy’s face. I’m also partial to the mini Animal on the lower-right, who looks like he’s wearing an Elmo costume with bondage gear. Yikes, don’t tell his parents I said that… 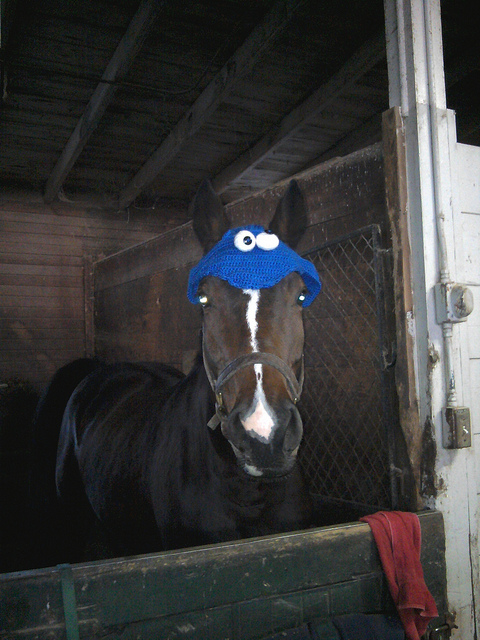 It’s a horse. Dressed as Cookie Monster. You are welcome.

These were the three Creature Shop costumes I managed to find, and holy crap are they amazing! The Worm is a little off-putting, but I’d still join him to meet the Mrs. and share a cup o’ tea. And why anyone would want to dress as a dying Mystic is beyond me. But well done, Labyrinth and Dark Crystal fans, what with the paper-m?É¬¢ch?É¬© and whatnot. 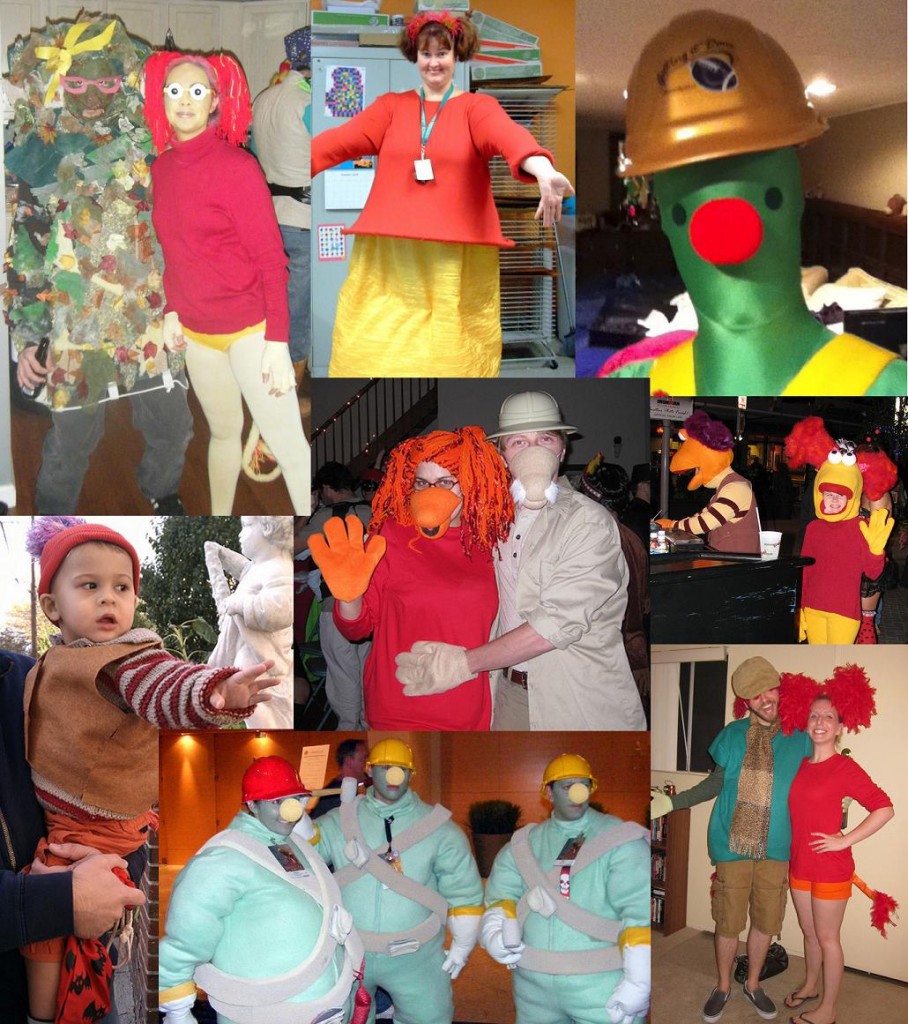 Every year, I expect to see at least a few Reds and Gobos and Doozers, but I was caught a bit off guard by the Trash Heap (upper-left corner) and Traveling Matt (middle)! Though Matt and Red’s beak-like mouths creep me out. And the Sumo Doozers aren’t helping alleviate my nightmares either. But creepiest of them all is the Doozer in the upper-right, who will most likely be hiding in your closet when you get home tonight. Also, he reminds me of someone I used to know. 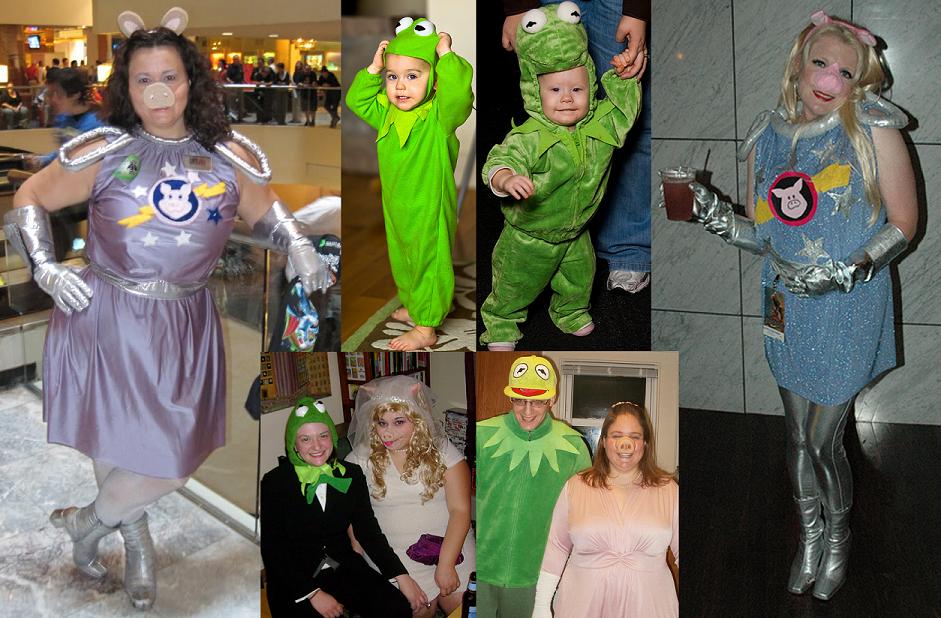 Kermits and Piggys are always out in full force this time o’ year. But I was surprised at the number of variants, as if they knew that just dressing as the Pig and Frog would be cliche compared to last year. I suppose that’s how we ended up with a few Pigs in Space Piggys, more baby Kermits (not to be confused with Baby Kermit), and even K&P on their wedding day. I hope these costumers decide to take it a step even further next year. Wouldn’t you love to see “Boffo Socko” Kermit? Or Rosenthal? Or Virgil the Monkey? Or what about Wonder Pig? Or Saltine? Or, I dunno, Miss Piggy as the Statue of Liberty? Get creative, people!

Somehow, Snoop Dogg dressed as The Count seems very appropriate. But that may just be because I’ve only ever seen him during a thunderstorm. 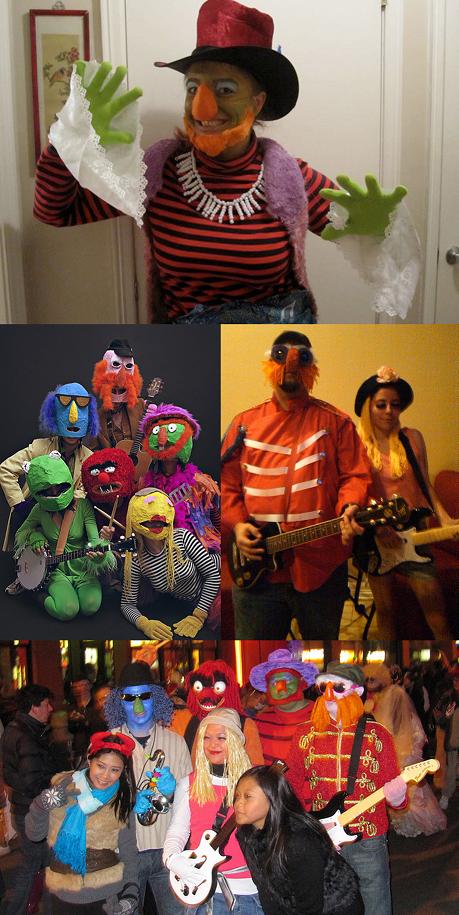 I gotta hand it to these Electric Mayhem cosplayers for going out with instruments in tow. But I’ll only be impressed if they can actually play their respective instruments. And if they can cover “Tenderly“. Now that’s tender, baby.

Didn’t anyone tell these costumed crazies not to mix their Muppets? The Swedish Chef in the same circle as Cookie Monster? Bunsen and Red Fraggle? Mahna Mahna and David Bowie??? What do they think this is, Muppet Family Christmas?? 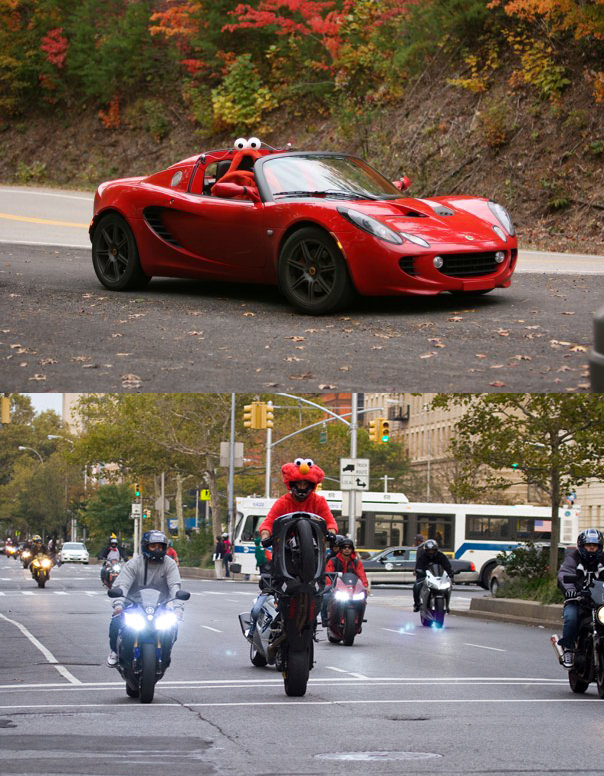 Oscar the Grouch was another popular costume this year. Apparently the ingredients for a successful Oscar costume are: One trash can, a mess of green fur, a bunch of crap glued to the sides, a healthy amount of dirt, and two bushy eyebrows. Instructables.com, eat your heart out.

Here’s your regular dose of Muppet Show costumes, including a couple Beakers and Bunsens, a supercool Mahna Mahna, a drunk Swedish Chef, and a guy who’s supposed to be John Denver (though why John Denver is covered in tiny Muppets, we’ll never know… maybe he’s John Denver as Gulliver?). I admit, I’d probably be more than a little spooked if I saw the giant-headed Statler and Waldorf coming my way, but not nearly as much as that Gonzo at the top. His nose alone could anchor a ship. 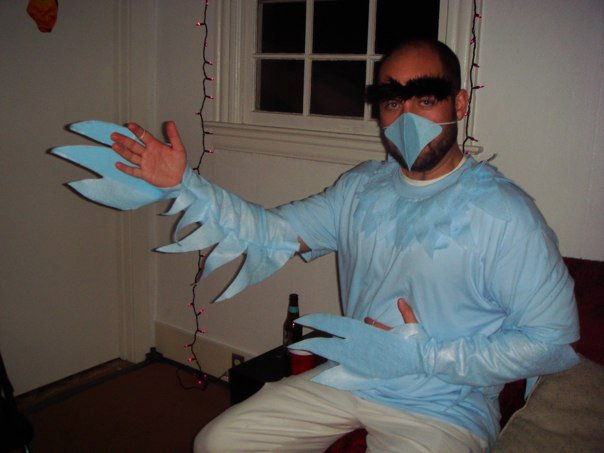 This is one of my favorite costumes of the lot. It’s Sam the Eagle in his most basic form: just a blue shirt, some feathers, a paper beak, and a prominent brow. And the bald head was a nice touch. I’m hoping he completed the costume with a disgust for popular culture and a strong opinion on nudity.

Hey, it’s the Sesame gang! Except for the lobster. Ignore that guy. But make sure you take note of the mustachioed Mr. Noodle right behind him, who looks less like Bill Irwin and more like Ned Flanders. But the winner of the bunch is the Oscardog. Because, c’mon. Oscardog.

This was the only picture I could find of someone wearing the new Sexy Sesame Street costume. It looks a little less trampy and a little more Sunny Days than I expected, but it still makes just about zero sense. But at least this is the only Sexy Sesame character we’ll see this year…

I spoke too soon! It’s Sexy Big Bird, Sexy Elmo, Sexy Cookie Monster, Sexy Kermit, and… oh my goodness, it’s Sexy Mr. Snuffleupagus. Never in my entire life did I think I would be putting those words together. But is it wrong that the thing I’m most insulted by is the fact that Sexy Kermit only has four points on her collar? 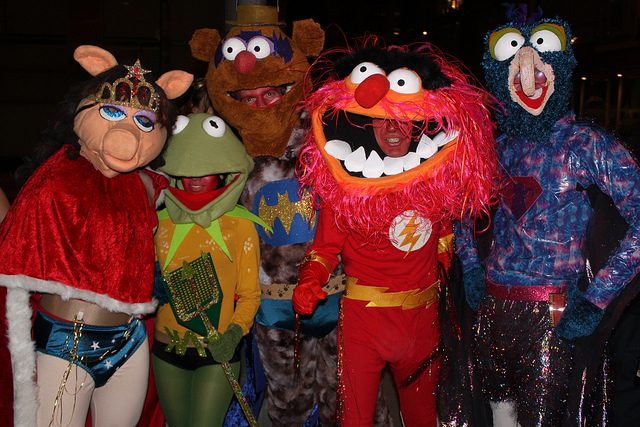 If there’s one thing I love, it’s Muppets. If there’s two things I love, it’s Muppets and superheroes. My inner fanboy just did a dance of happiness after seeing Wonder Piggy, Bat-Fozzie, Animal-Flash, and Super-Gonzo. But what really takes the cake is Aqua-Kermit. Two of my all-time favorite things rolled up into one awesome costume! (All of you Aquaman haters can just shut the heck up.) 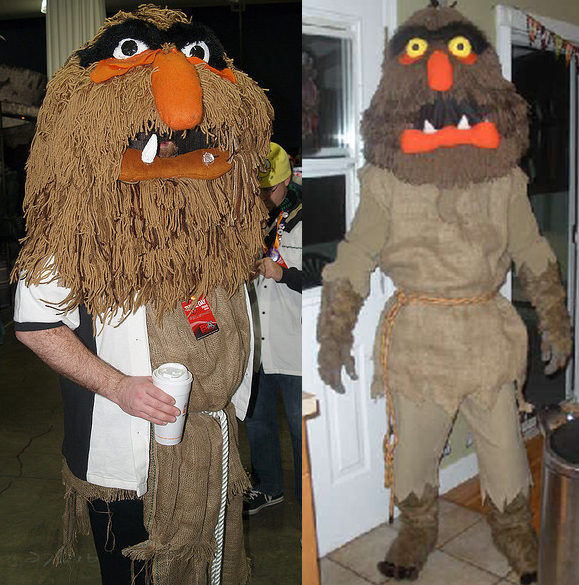 Every year, I find one Sweetums costume. This year, I found two! Which is already way more Sweetums than anyone would be able to handle. (Check out Instructables.com for directions on how to make the one on the right!) 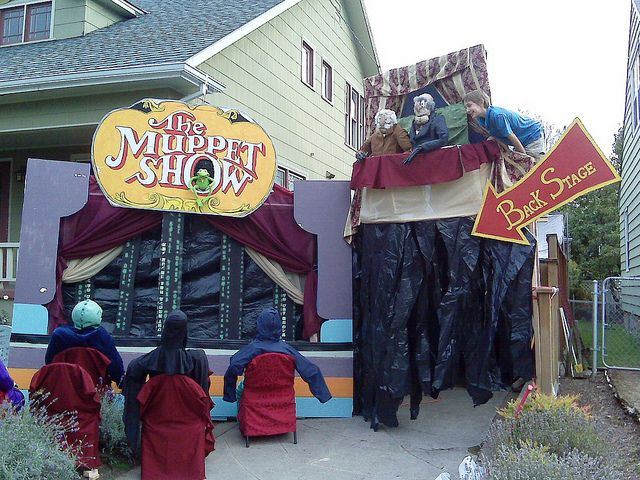 This family threw a Muppet-themed Halloween party and decorated their front lawn as the Muppet theater, complete with Kermit in the Muppet Show logo, a monster audience, and Statler and Waldorf in their balcony, ready to heckle! So yeah, dressing up your lawn? That’s pretty much the ultimate Muppet costume. 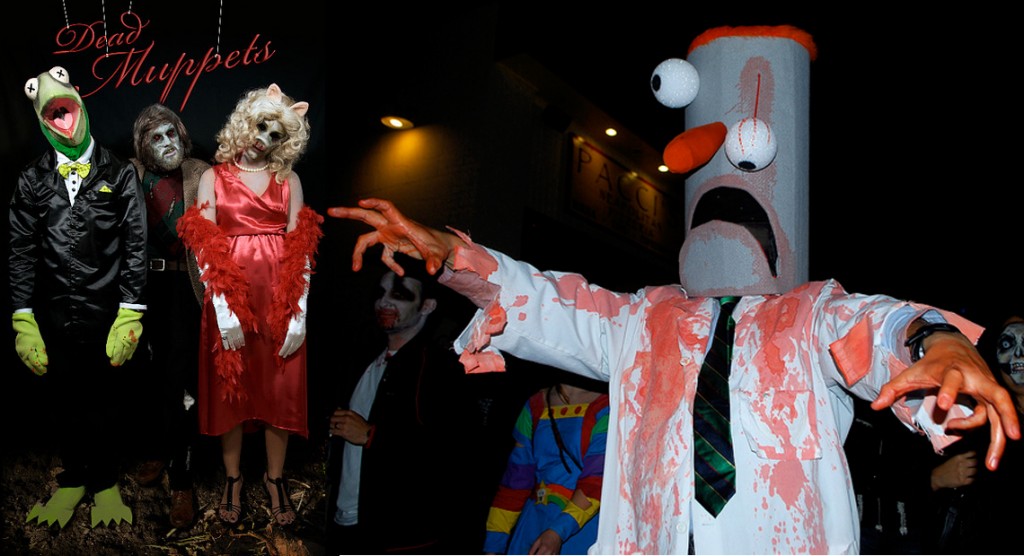 Halloween wouldn’t be complete without some scarifying versions of Muppets (then again, it probably would). On the left is an undead Jim Henson with his deceased Muppet pals, and on the right is zombie Beaker, who looks like he walked right out of an all-ages version of Shaun of the Dead. Somehow, the Beaker costume doesn’t look all that strange. Like, maybe Bunsen took one of his experiments a step too far, and then Beaker fed on his brains. Someone should write that fanfic! (Note: No one should ever write that fanfic.)

And the winner of My Favorite Costume goes to this guy, who dressed as Mr. Johnson! And he looks just a little sad under that mask, making me think that he spent the day channeling his inner Mr. Johnson, expressing his frustration and outrage at his friend dressed as Grover. I hope he celebrated Halloween by going to a restaurant and getting terrible service.

And that’s it for another year of Muppet Halloween costumes! Many thanks go out to Elaine Eno, Nick Moreau, Celena Bell, Gordon Y, Kat Caro, and all the unsuspecting users of Flickr for generously donating your pictures!

Click here to start preparing your Beauregard costume for next year on the ToughPigs forum!