Every Halloween, people everywhere look forward to the candy, they relish the idea of getting scared, and they embrace the spookiness of the season.  But forget all that – what people really want are Muppet costumes.

And what luck!  That’s exactly the sort of service we here at ToughPigs have been providing since 2002!  Yes, we are returning with our grand tradition of collecting all the best and strangest Muppet, Sesame Street, Fraggle Rock, Dark Crystal, and Labyrinth costumes, and delivering them right to your door.  It’s sort of like a reverse “trick or treat”, but instead of going out for candy, the photos of Muppet cosplayers come to you.

If you or any of your friends are wearing a Muppet costume this year, please email us photos!  We’ll be collecting pictures throughout the next year for the 2019 Halloween Parade.  Yes, sometimes we actually plan ahead. 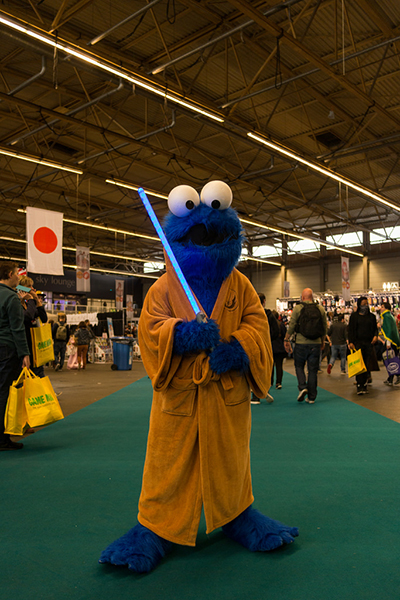 There have been times when a person has so expertly combined two things that I genuinely love, and this is one of those times.  Of course, I’m talking about bathrobes and Japanese flags hung in the distance. 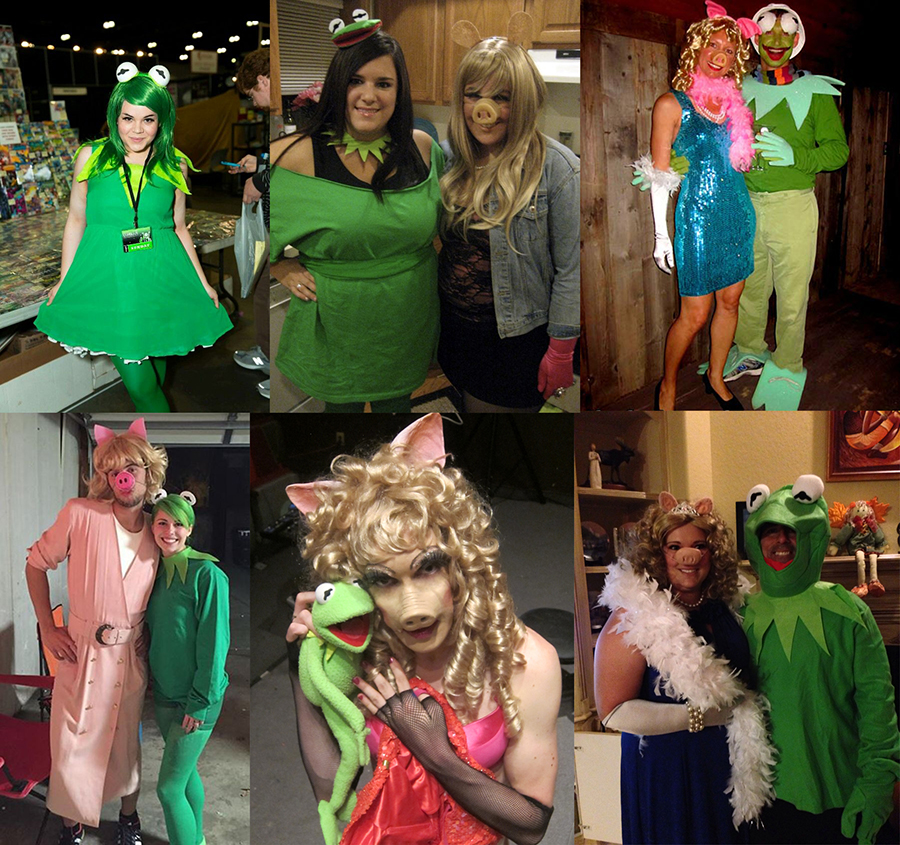 As always, Kermit and Piggy are popular costumes.  It’s always interesting to see the diversity in the types of costumes.  Kermit gets gender-bent, with varieties of eyes and collars.  Miss Piggy can be casual or 1980s-inspired or a beauty queen or a real pig.  It just goes to show, it’s hard to get these costumes wrong (then again, so many people have…). 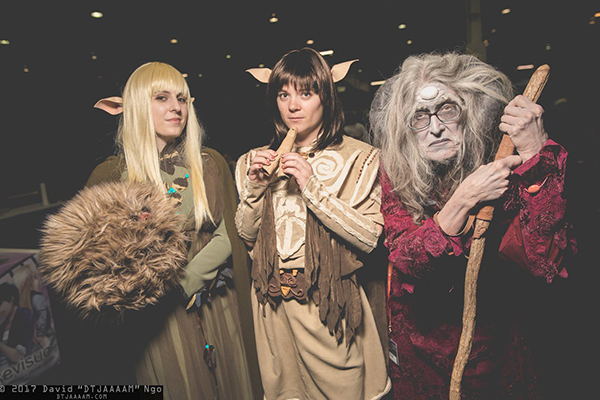 In the past, I’ve been known to skim over the Dark Crystal costumes, but these are fantastic.  There’s so much detail in the costumes, props, and other accoutrements.  Aughra is particularly unsettling, which is perfectly appropriate. 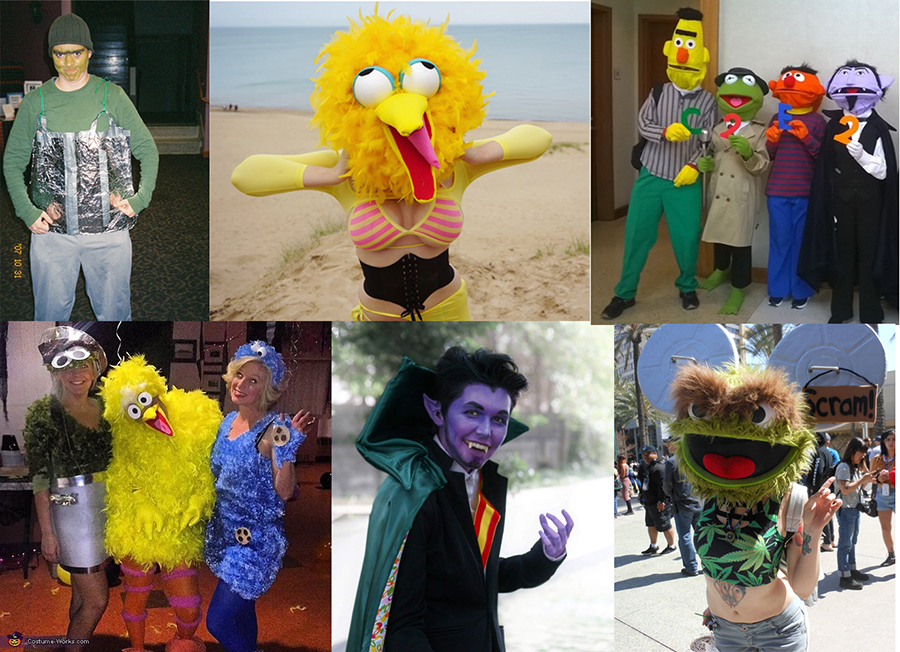 The Sesame Street characters always get a lot of attention during Halloween.  I do question some of the cosplayers’ approaches though.  I’m looking at you, tin foil can Oscar and half-naked strangled Big Bird. 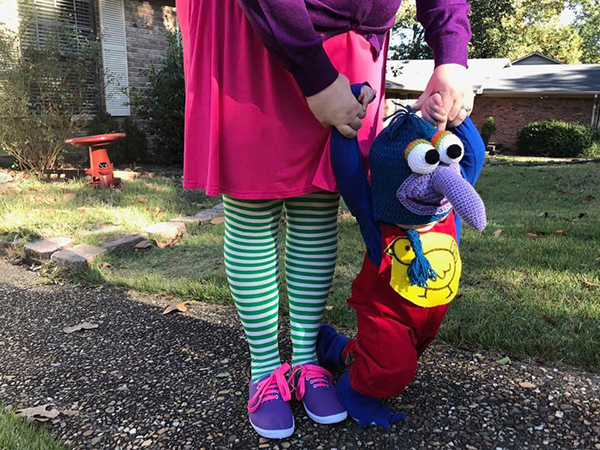 Never before have I seen a more perfect Muppet Babies cosplay duo.  The crocheted Baby Gonzo hat/mask is expertly made, and the Nanny costume is on point.  These costumes really do make dreams come true. 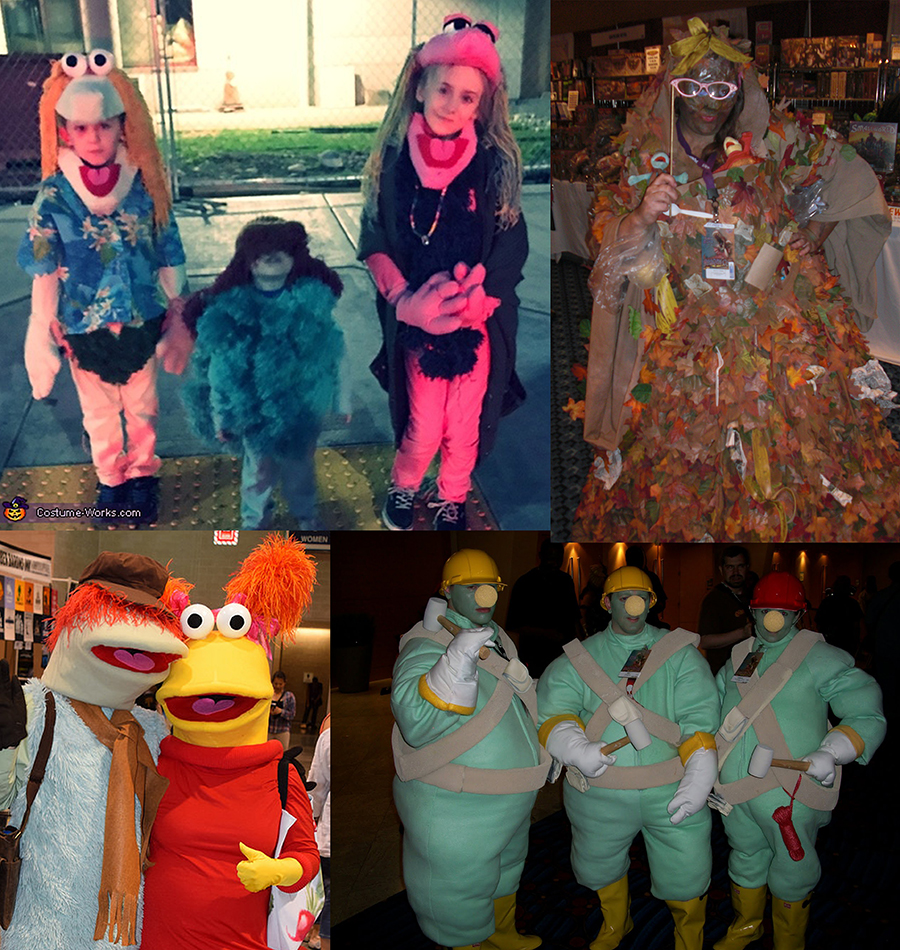 It’s always nice to see some Fraggle love in the real world.  I’m especially impressed by the person who built a Marjory the Trash Heap costume!  Made from real trash too, I presume. 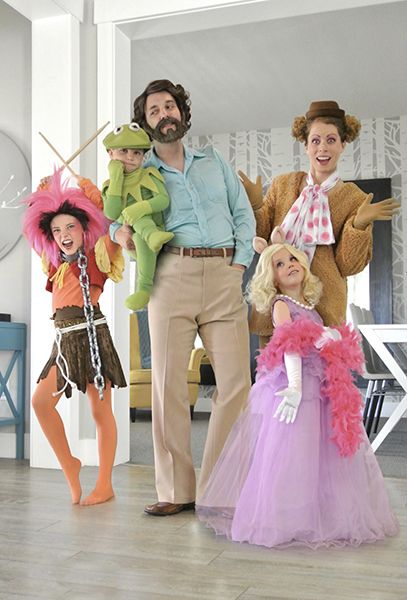 This family’s photo got a lot of attention on the interwebs this year, and for good reason.  They nailed the anarchy of Animal, the glamour of Miss Piggy, and the casual annoyance of Kermit the Frog.  Think they’d be willing to adopt me? 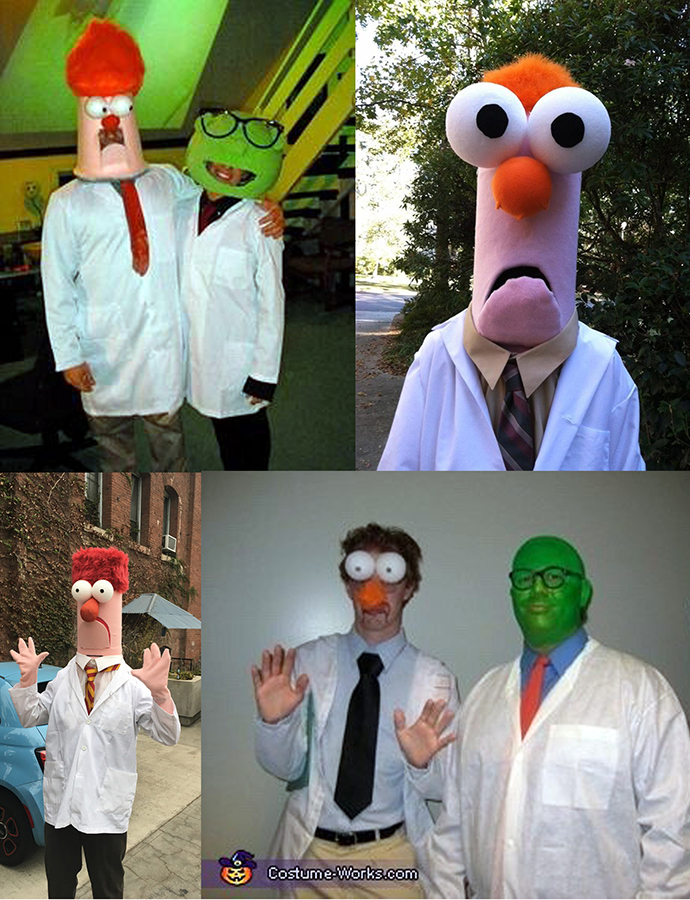 No Halloween Parade is complete without the shocked eyes of Beaker, complete with the look of utter terror. Serious question though: How do any of these Beakers actually see anything???  Maybe that’s why they look so scared. 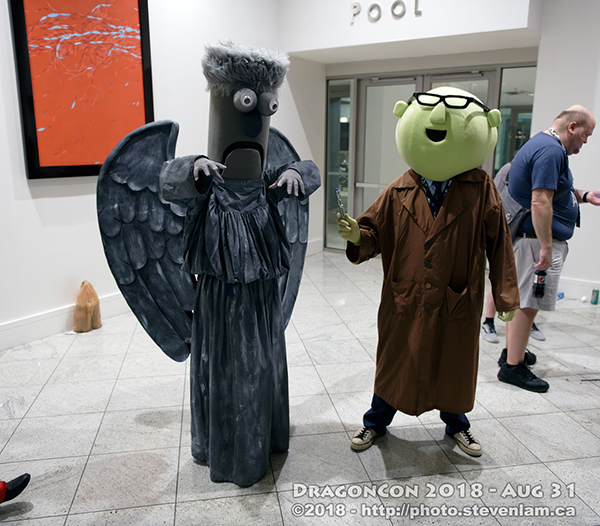 This Bunsen/Beaker set went the extra mile and mashed their costumes up with The Doctor and a Weeping Angel.  It’s sort of nice to see Beaker terrorize Bunsen for a change. 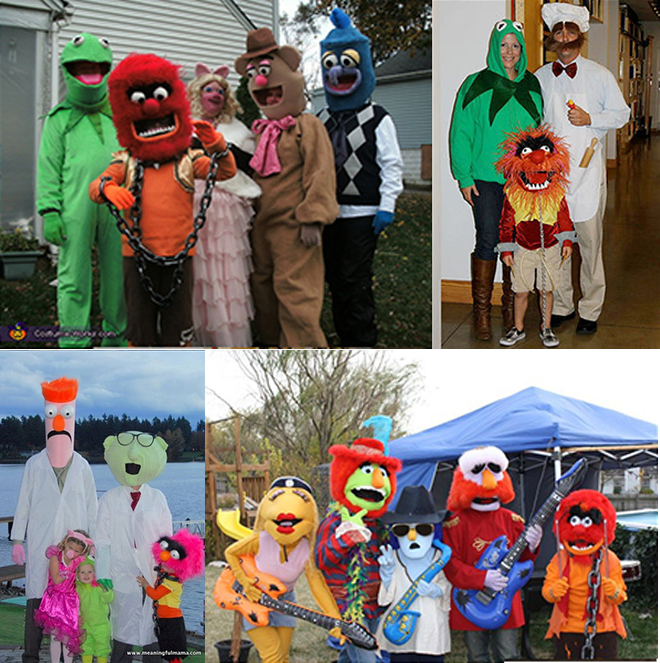 The families that cosplay as Muppets together stay together. 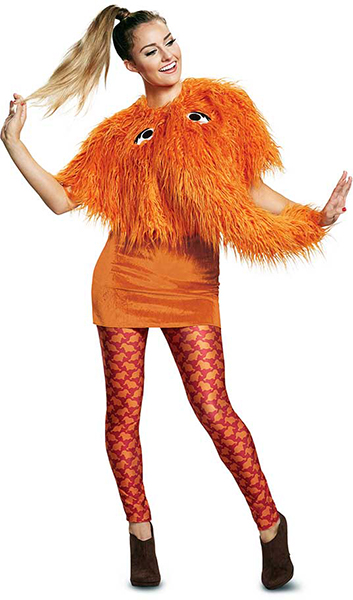 Yep, that’s an officially licensed Sexy Snuffy costume.  So, we’re all agreed – we have definitively sunk as low as humanly possible as a society.  Goodbye, world! 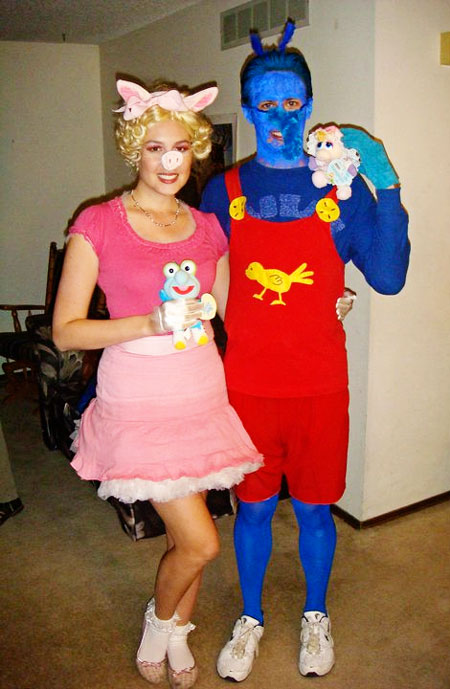 I think it’s safe to say that blueface is never a good idea. 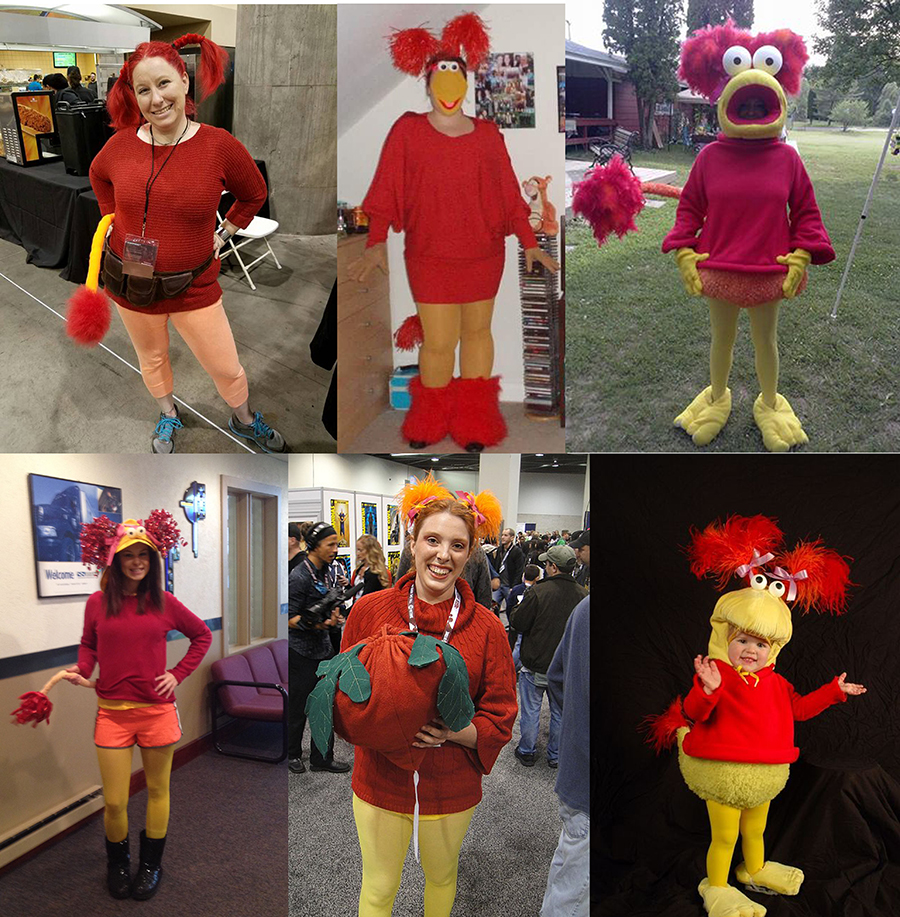 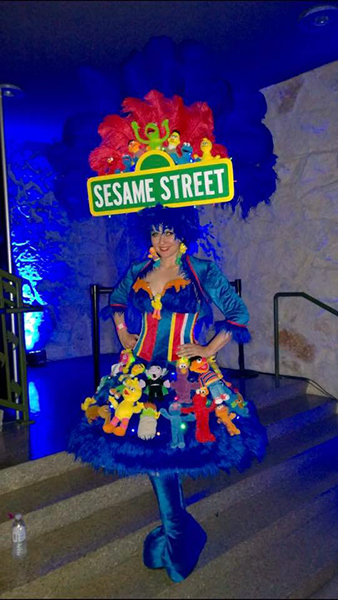 So, this woman is dressed as… Sesame Street?  Like, the concept of the show?  Or did she just hot glue some dolls to a dress and I’m thinking about it too hard?  No, that can’t be it. 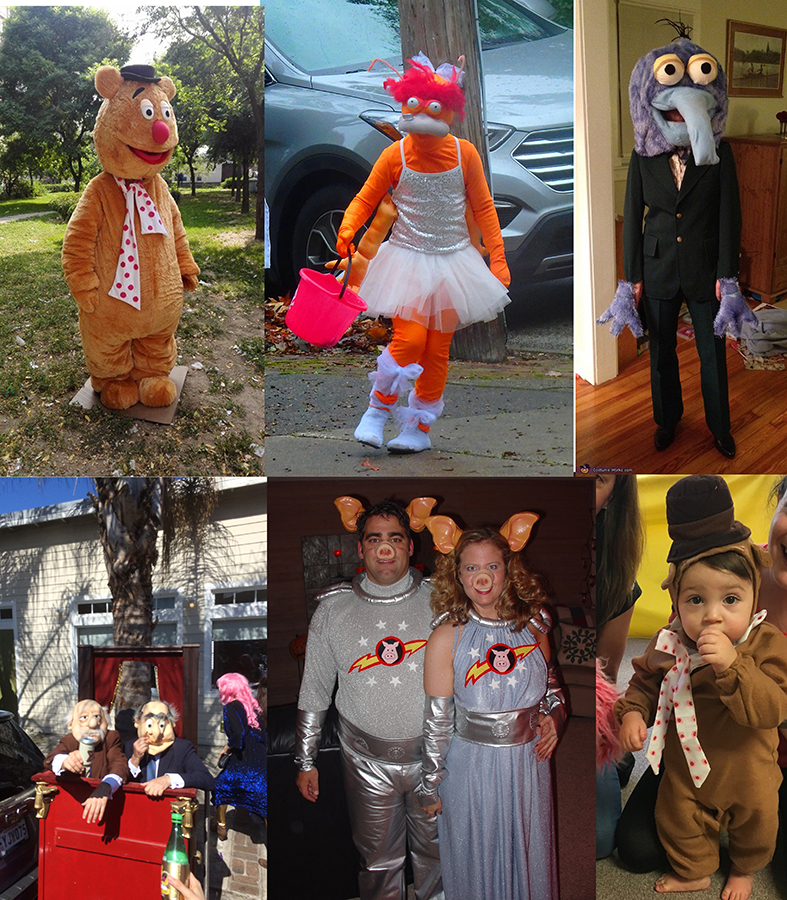 All of these Muppet cosplayers should be proud of how they went the extra mile.  From Pepe’s (rarely seen) tutu to Gonzo’s furry hands, from Statler and Waldorf’s balcony to the shininess of the Pigs in Space uniforms, they all found a way to up their Muppet costume game. 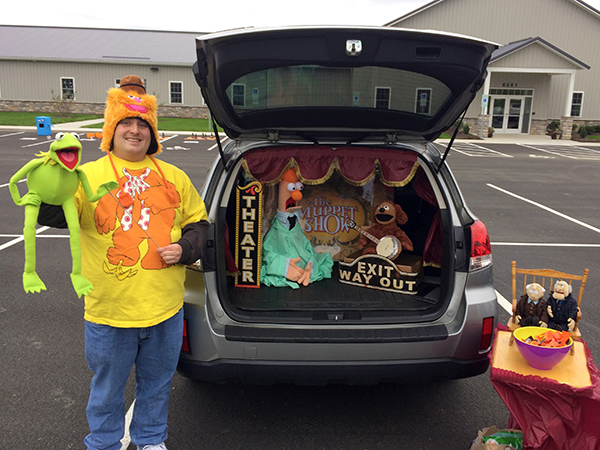 Look, I haven’t owned a car in over a decade, but if I did, you better believe I’d dress it up like the Muppet Theater year-round like this guy. 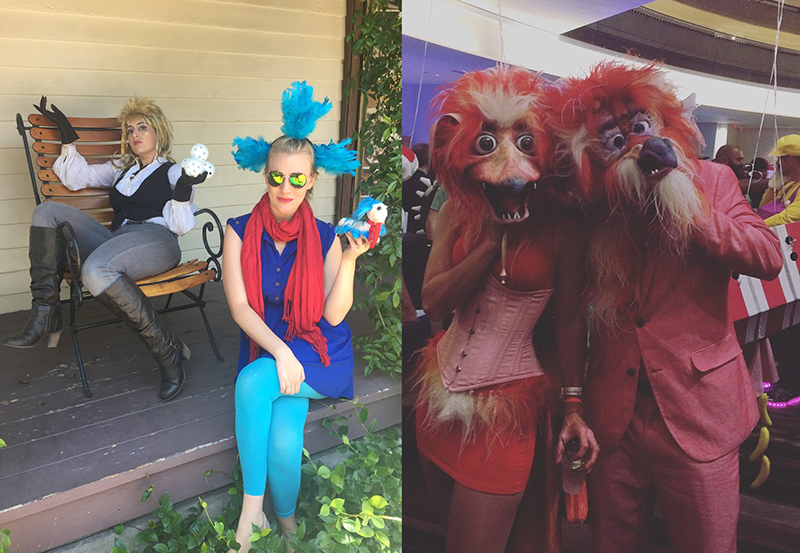 Labyrinth lends itself to so many great costume ideas.  Even the Worm, who was on screen for all of a third of a second, gets plenty of cosplay love.  I must say, the Fireys are among the more clever costume ideas, as they still make sense when you separate the mask from the rest of the outfit. 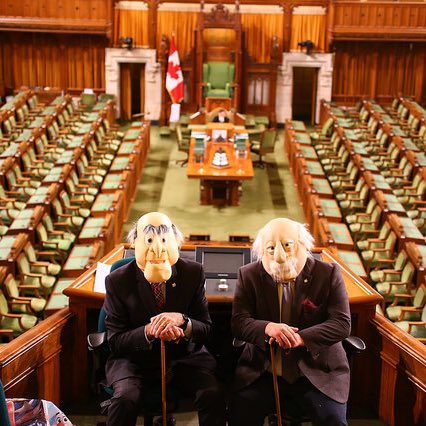 We Americans likely won’t recognize this setting, but that’s Statler and Waldorf in the Canadian Parliament.  Underneath the masks are politicians Ken McDonald and Bryan May, bringing some much-needed heckling to the House of Commons. 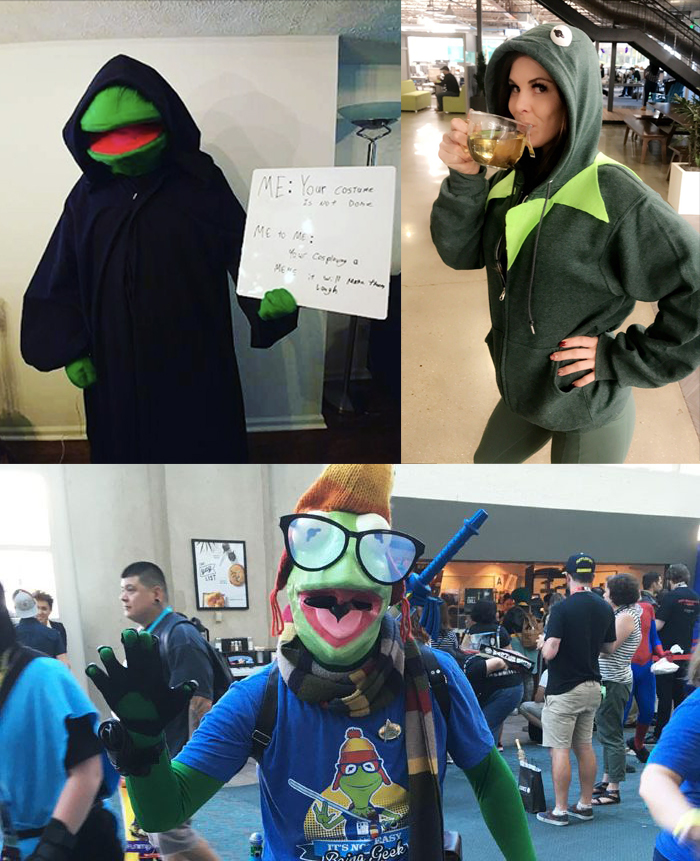 Kermit the Frog may be the most meme-friendly character on the internet.  So it’s little surprise that his unofficial popularity is leaking into some Halloween costumes, including “Dark Kermit”, “Tea Lizard”, and some guy who’s dressing as the visage of Kermit found on his t-shirt.  Just envision the Inception-level geekiness that goes into these: Official Muppet content gets usurped and redefined by fans, who then make their own fan creations from the fan-generated memes.  Crazy. 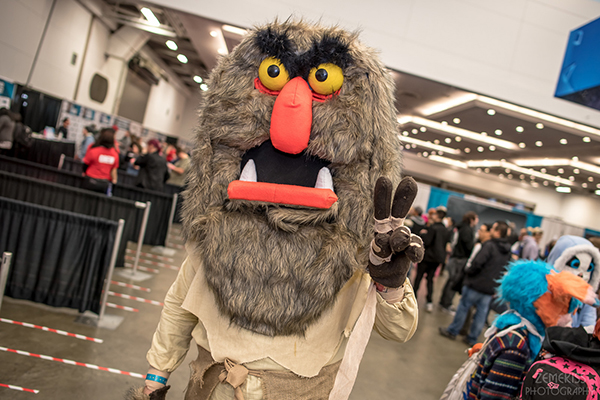 Much like Sweetums at the end of The Muppet Movie, he finds a way to catch up to us once every Halloween Parade.  This year’s annual Sweetums is epic, and right on time. 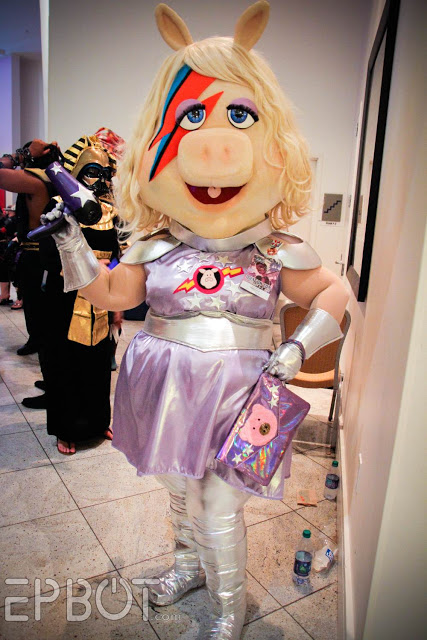 The winner (well, they’re all winners, but you know what I mean) of this year’s Halloween Parade is Piggy Stardust.  PIGGY STARDUST, you guys!!!  Beyond the fantastic costume (and the ray gun hair dryer), I just can’t resist a brilliant pun.

We hope you enjoyed this year’s Halloween Parade!  Again, if you or someone you know put together a great Muppet costume, send us a photo and we’ll include it in next year’s roundup!

Click here to dress as your favorite Fraggle (as long as it’s Red) on the ToughPigs forum!