Every year around Halloween, we at ToughPigs get into the spirit by sharing all of our favorite Muppet-inspired costumes from the past year!  Thanks to the various comic book conventions around the world, people are dressing up more than ever, and they’re absolutely nailing the costumes.  Not only that, but the odds of finding obscure characters and clever twists seriously increased.

Are you or a friend dressing as a Muppet this Halloween?  Send us your costume to be included in the next Halloween Parade!

Be sure to check out our previous 14(!) Halloween Parades as well, get ready to hand out some candy, and enjoy the costumes! 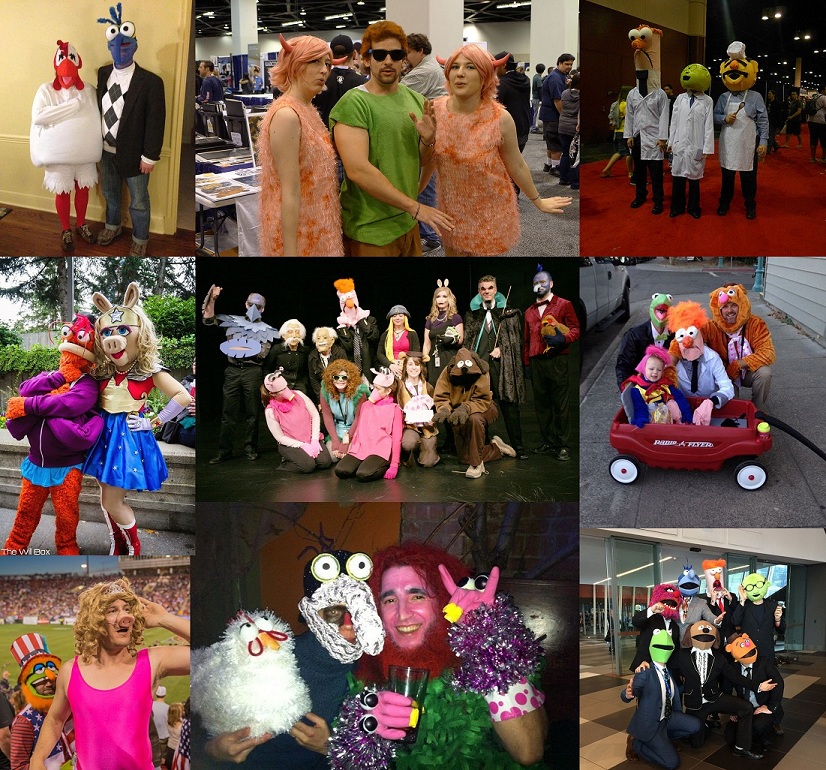 Let’s kick off our Halloween Parade with a crapload of Muppet Show costumes!  The Muppets really lend themselves to great group costumes.  Everyone pick your favorite Muppet, paper mache yourself a head, and you’re set!

In this batch, my favorites are that full-bodied Pepe, Mahna Mahna with the Snowth hands (genius, that), and the Reservoir Dogs-inspired Muppet crew.  They all make me wish I had, y’know, friends. 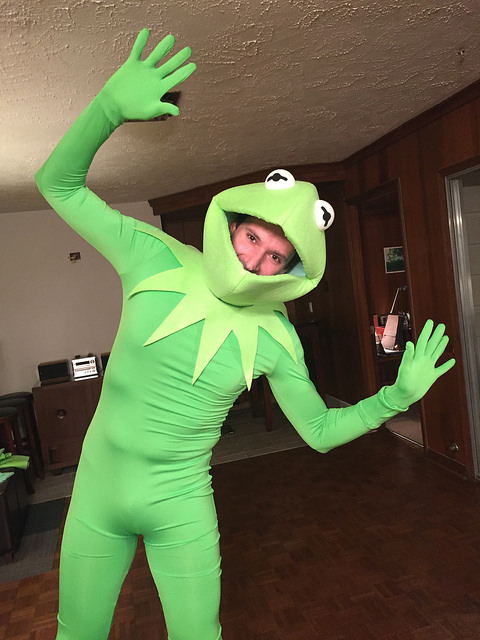 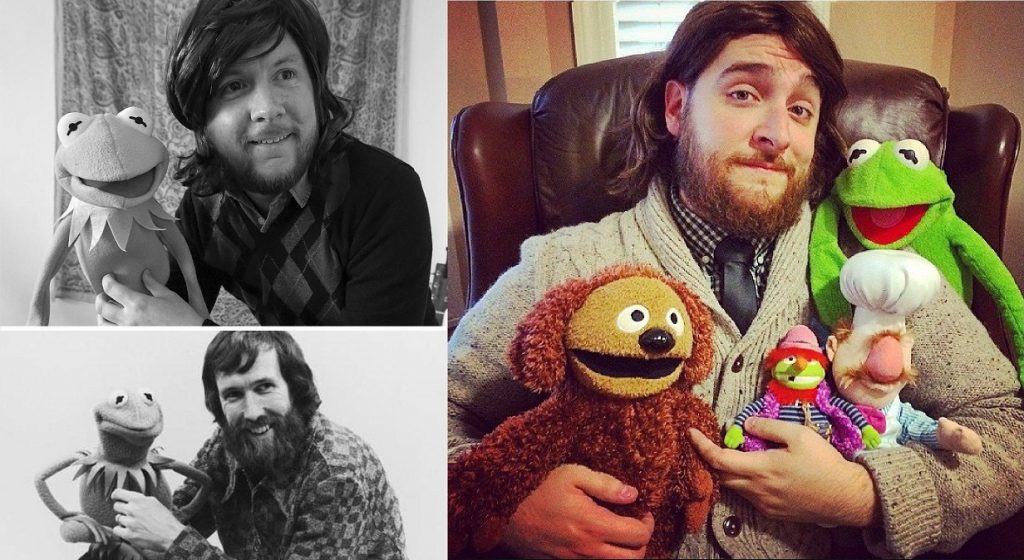 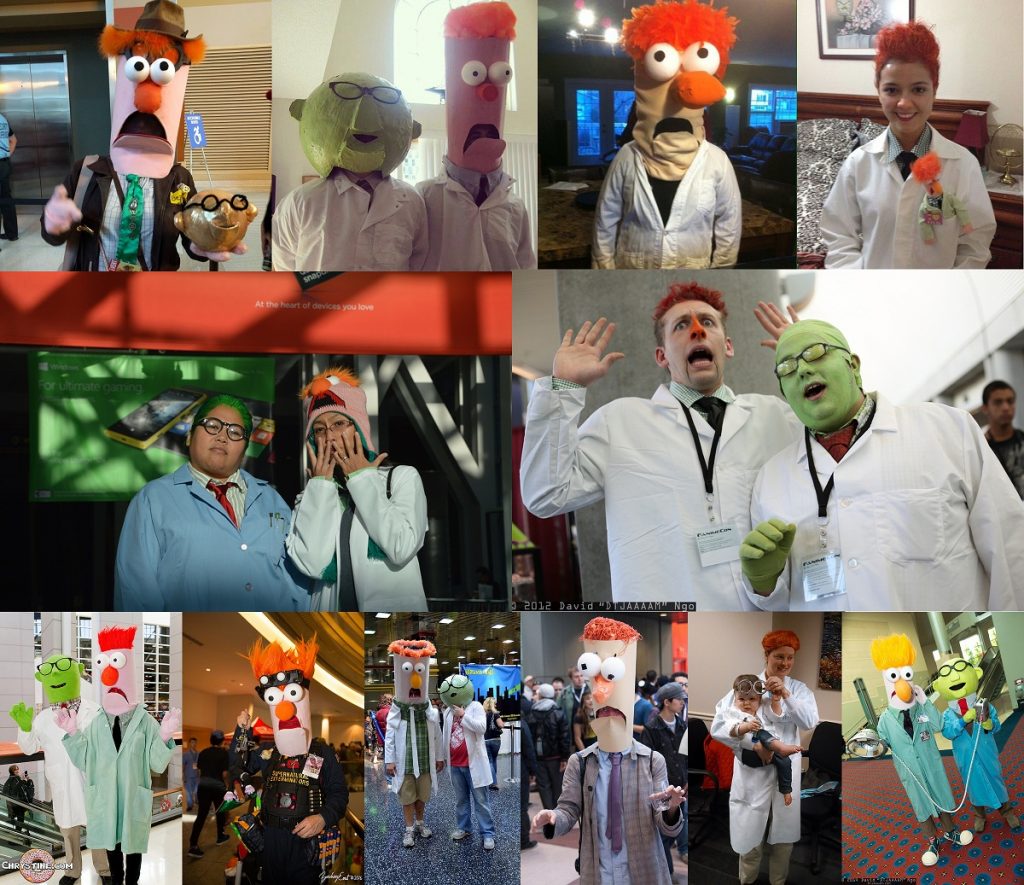 Bunsen and Beaker might be the most popular Muppet costumes.  We actually found a bunch of other examples that just couldn’t fit in this already-overstuffed picture.  I also love how every cosplayer has a different method for creating the costumes (helmets, paper, makeup, etc) and how so many people think of cool variants (zombies, Indiana Jones, Ghostbusters, babies, etc).  People are clever! 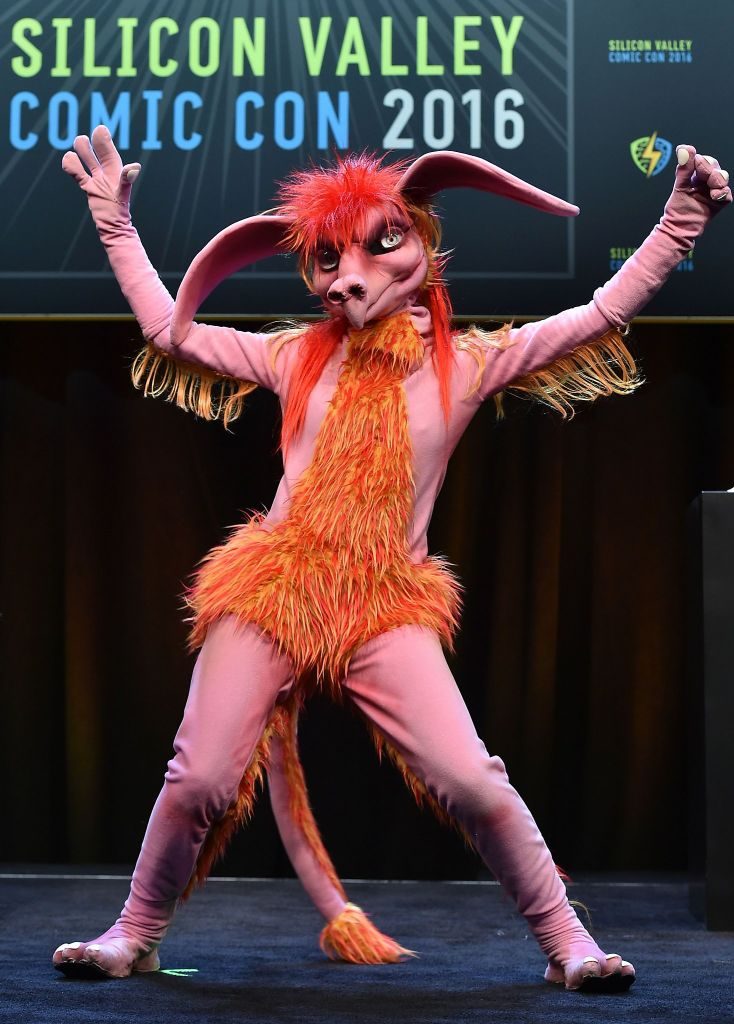 Yeah, but does his head come off? 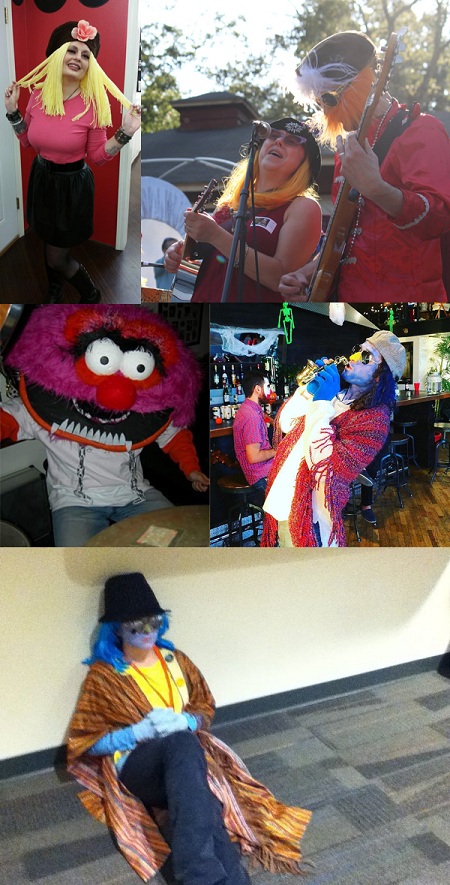 These cosplayers am, is, are, and be, they whom as are known as The Electric Mayhem!  I’m especially pleased to see multiple Zoots this year.  It’s about time our favorite narcoleptic saxophonist got a little love.

At what point does a dog costume become a Rowlf costume?  Is it the piano?  Okay, yes, it’s the piano.  I don’t know why I phrased it like that, it wasn’t all that much of a mystery. 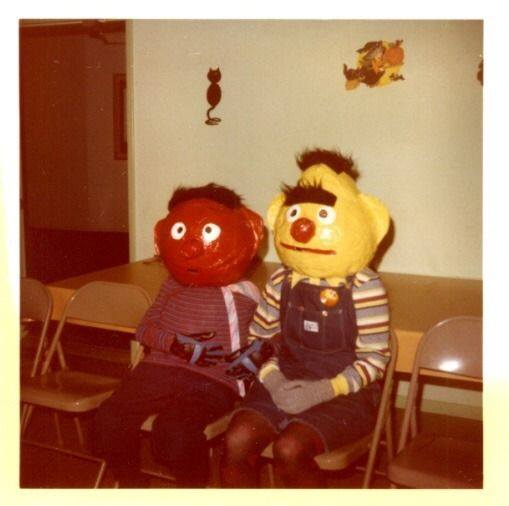 Vintage Bert and Ernie costumes!  And they’re just as terrifying as anyone could hope for old Halloween costumes.  How awful would it be if they looked remotely like the puppets?  Or, even worse, if they looked like cheap store-bought costumes?  Anything less than vomit-inducing horribleness would simply be disappointing. 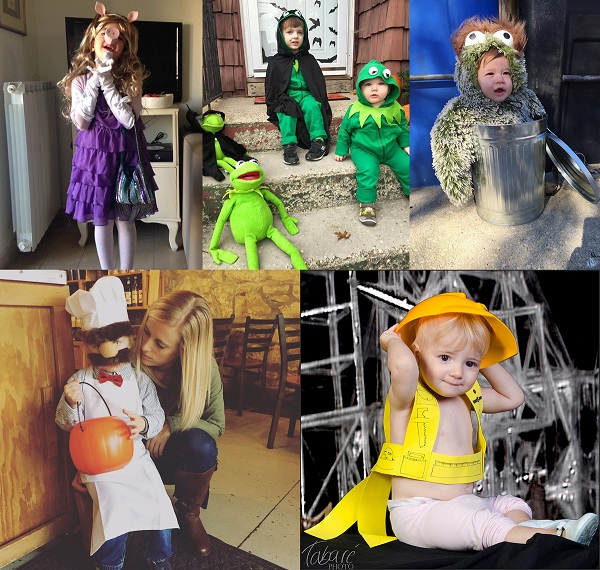 Kids in Muppet costumes?  Now you’ve gone too far.  How cruel can their parents be, dressing them in adorable Doozer helmets, supporting their love of the rarely-seen Constantine, and allowing them to leave the house dressed as a gibberish-speaking baker.  Leave the Muppet fandom to the grownups, children. 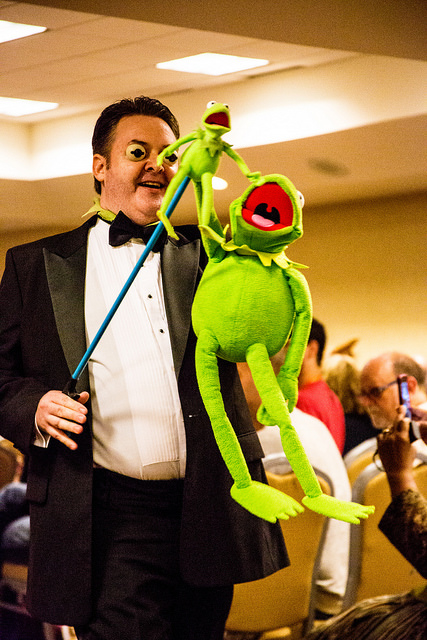 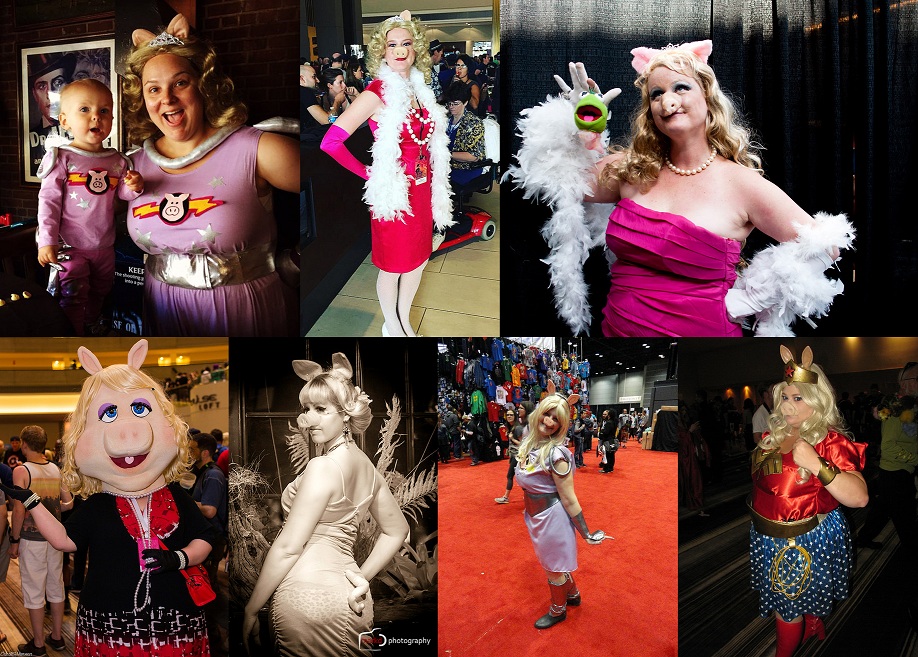 There’s only one real Miss Piggy, but these ladies do some great imitations.  I especially appreciate the matching First Mate Piggy costumes and the Wonder Pig outfit.  And how about all those extra accoutrements?  You can’t be Piggy without the ears and tails and feather boas and whatnot. 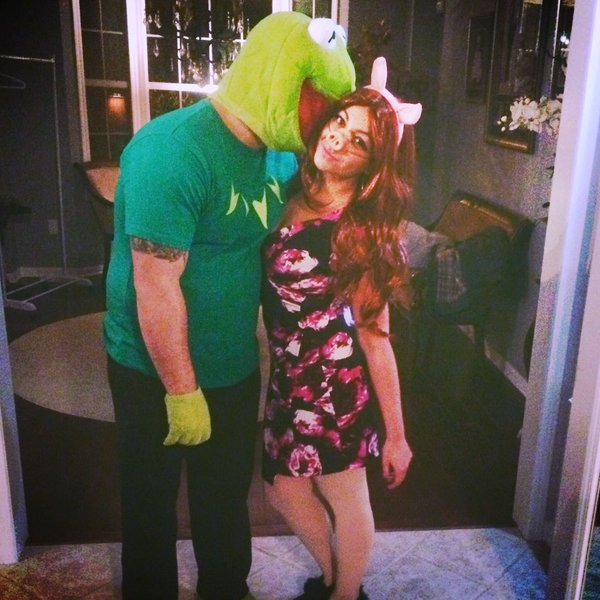 Your eyes may be deceiving you: This is not a Miss Piggy costume.  This is a rare example of a Denise costume in the wild!  And it also may be the last time you see anyone dressed as Kermit’s ex-girlfriend. 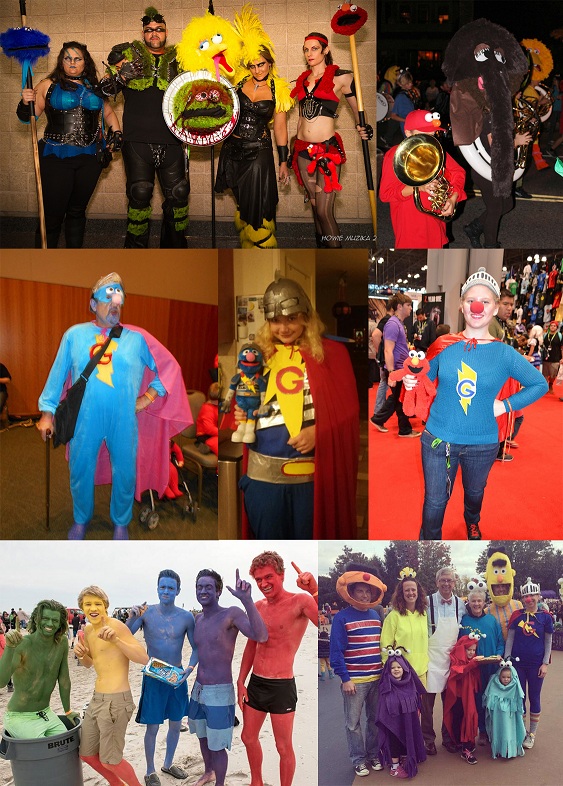 Much like the previously mentioned Muppet Show group costumes, Sesame Street also lends itself to great ideas to do with your friends and/or family.  I especially dig it when people go the extra mile to add something like bloody warrior outfits, or to remove something like unnecessary clothing. 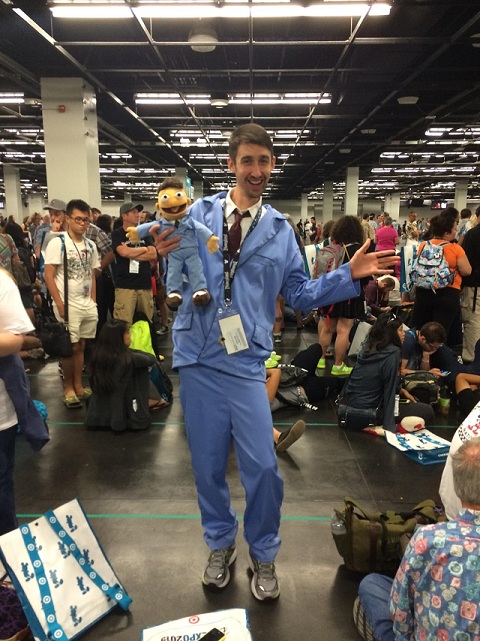 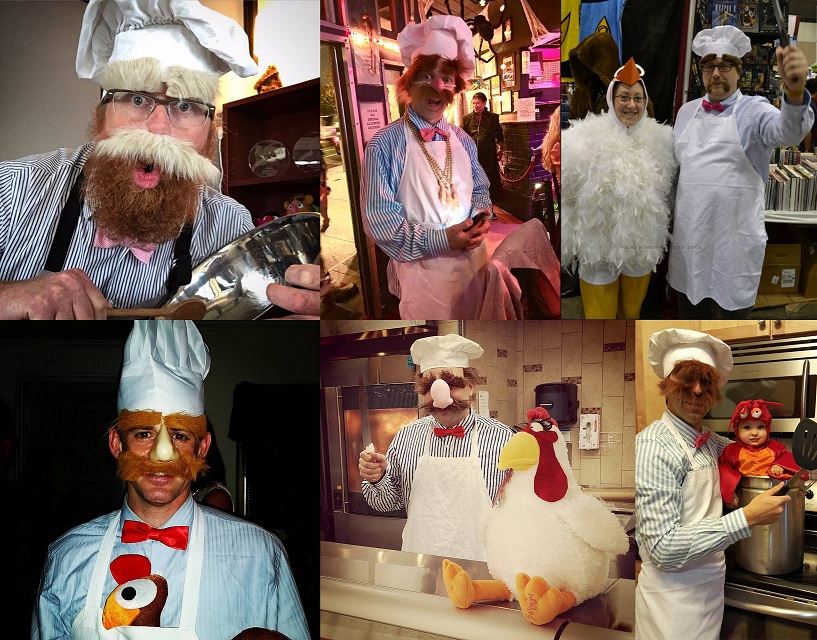 The Swedish Chef is a super easy costume to put together.  It’s just a chef’s costume and a bad accent.  But I always dig the attention to detail that people put into their outfits.  They’ve got the right blue-striped shirt, the bushy eyebrows, the Pee Wee Herman bow tie, and at least one of them came close to cooking a child dressed as a lobster.  Just like the real Chef would do!

Of all the obscure Muppet characters, I’m pleased that Sweetums makes the cut as the one who gets a new cosplayer every year.  Sure, we’ve seen C-list Muppet costumes, but they tend to only pop up every few years or so.  Sweetums, on the other hand, is a ToughPigs Halloween Parade mainstay.  I wonder if any of them have the strength to lift an entire Volkswagen like the real Sweetums. 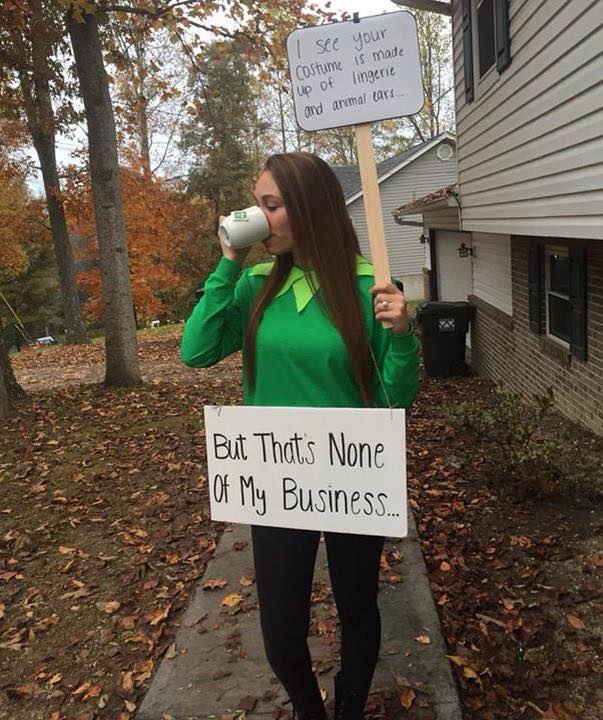 This costume is brilliant and I’m upset that I didn’t think of it first.  And that is totally some of your business.

Say, these Statler and Waldorf costumes aren’t half bad!  They’re horribly ugly and should be burned with lava!  Doh ho ho!  (This is why I’m not a writer for the Muppets.) 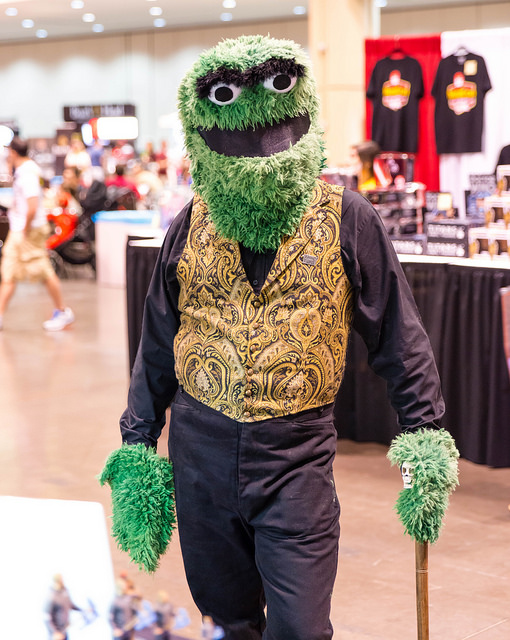 Damn, Dapper Oscar!  I bet his trash can is covered in the Louis Vuitton logo.  He imports his garbage from the south of France.  He and Slimey don smoking jackets to discuss the ethical anachronisms found in “Trash Gordon” novels while sipping on a 1962 chablis from an old hubcap.  And other fancy things!

I’m not sure how I feel about Burlesque Red.  I’m having thoughts that never occurred during a viewing of a Fraggle Rock episode.  Thoughts like: How would lingerie be designed if the wearer has a tail? 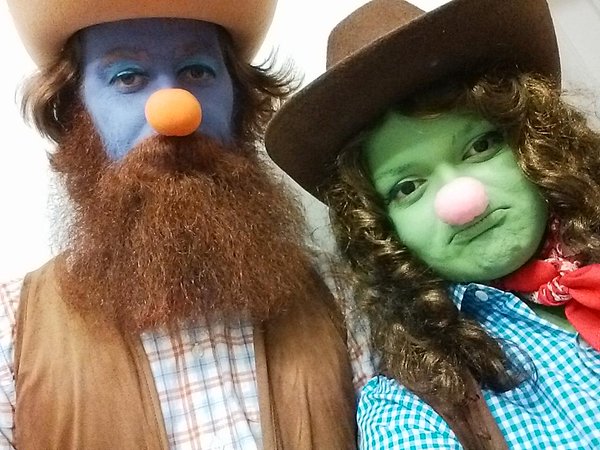 Apparently some of the crew of The Muppets dressed up as their favorite characters for last year’s Halloween at the studio.  And therefore, they got the rare opportunity to pose with the actual characters that they’re dressed as.  Remarkable. 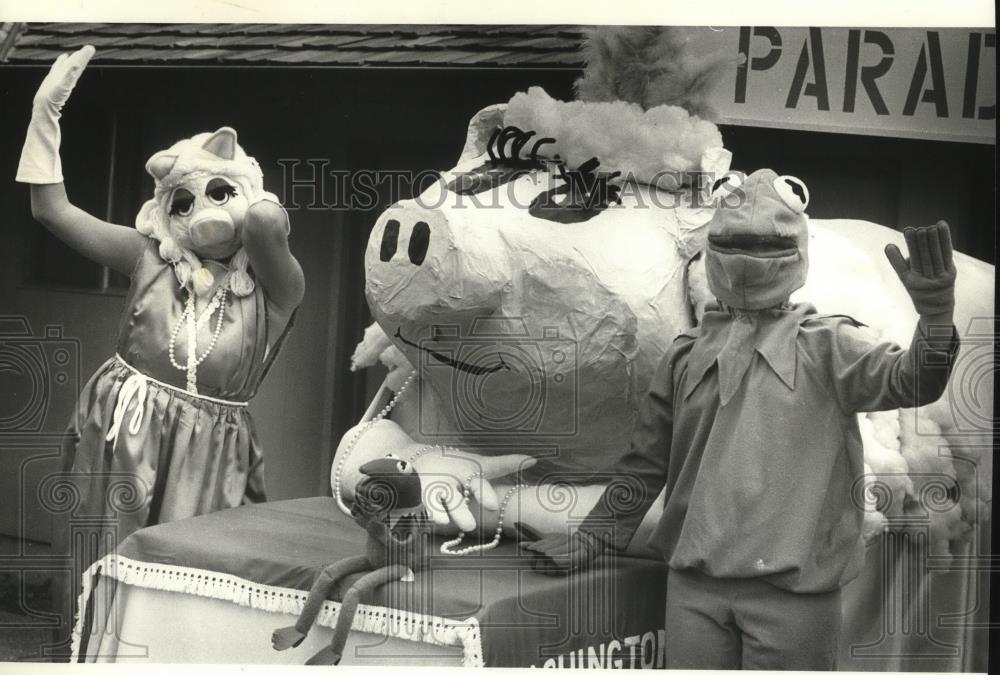 More vintage costumes!  Featuring Plasterface Piggy, Pajamas Kermit, and a float that I can only assume is based on the former ToughPigs logo! 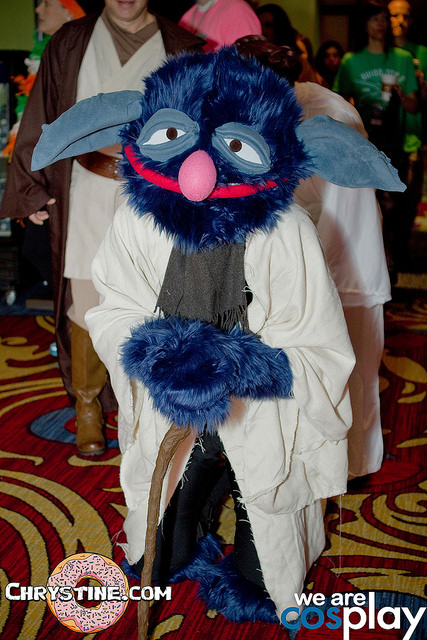 You’ve got to respect whoever decides to create an entire costume inspired by a one-off version of a character, as seen above in Groda from Sesame Street’s Star Wars spoof.  And yet, somehow I’m left wanting more… 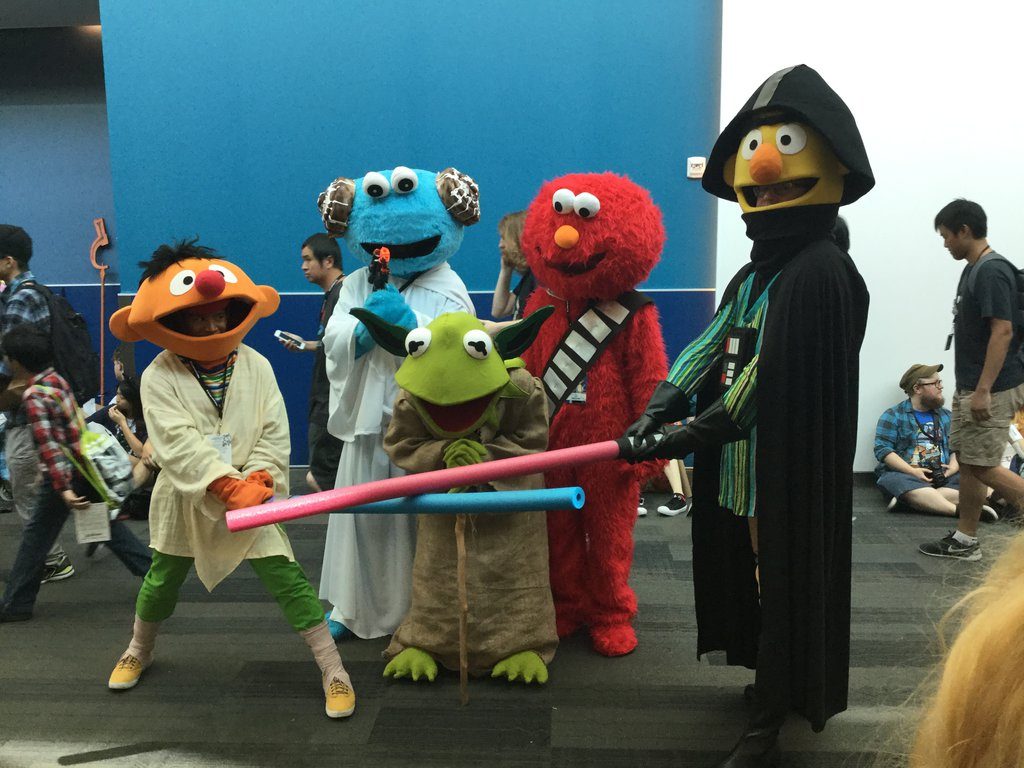 Aha, there’s the “more” I was after!  Ernie Skywalker!  Chewbaccelmo!  Bert Vader!  Pool noodles, I guess?  Okay, that last one is slightly less exciting, but the rest of this Sesame mashup is fantastic.  But only for Star Wars fans, as there isn’t anything here for those who prefer Star Trek… 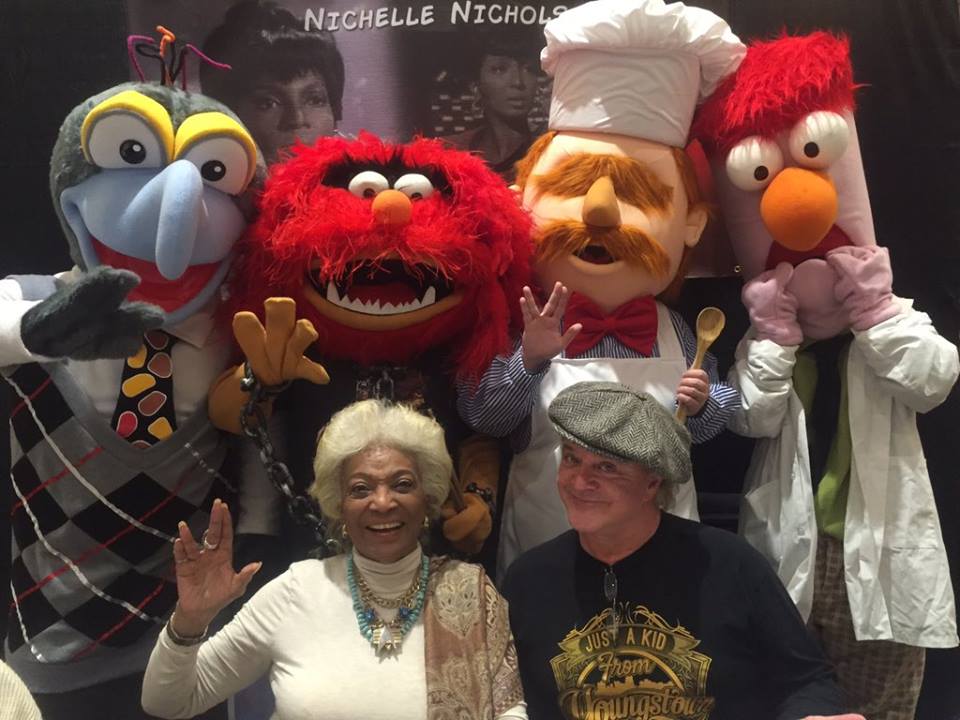 Until now!  Here’s a bunch of Muppets with Lt. Uhura herself, Nichelle Nichols!  What a good sport she is, throwing up the Live Long and Prosper hand signal with the Leprechaun Brothers and a blue weirdo who may or may not be an alien.  Then again, Uhura is the Communications Officer, so maybe she’s the only one who could decipher Mock Swedish, Animal’s grunts, and whatever Beaker’s speech impediment is. 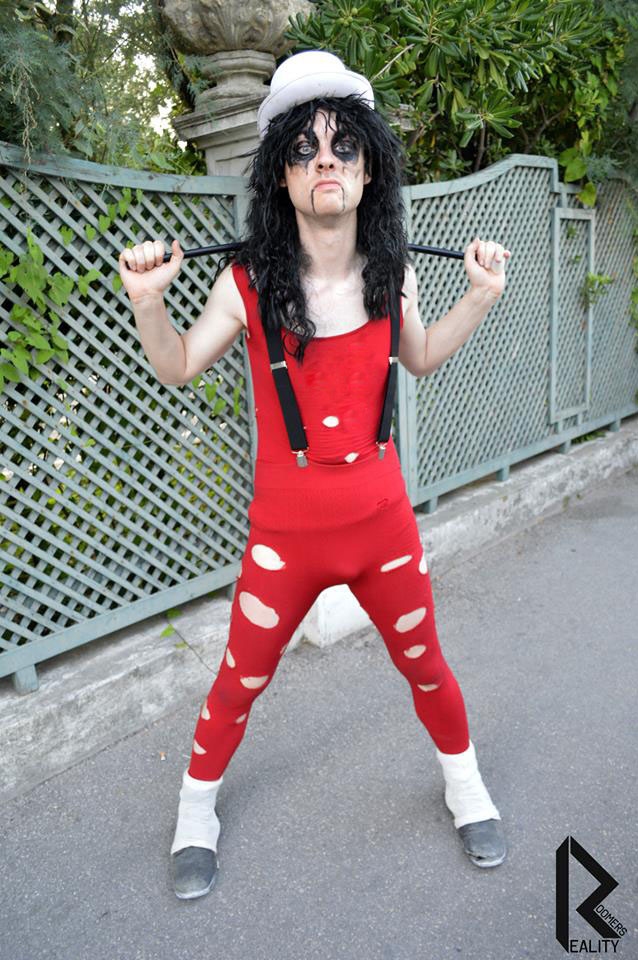 10 points to Slytherin for this amazingly obscure costume.  No, he’s not a Muppet.  He’s dressed as Alice Cooper from the “School’s Out” number on The Muppet Show.  I am beyond impressed, Mr. Cooper.

The act of dressing cute animals in costume is disturbing in theory, but how can you argue after seeing adorable puppies and piggies dressed as Muppets??  They’re so cute, I want to cuddle them until they agree to put on a variety show and 8 feature films for my enjoyment. 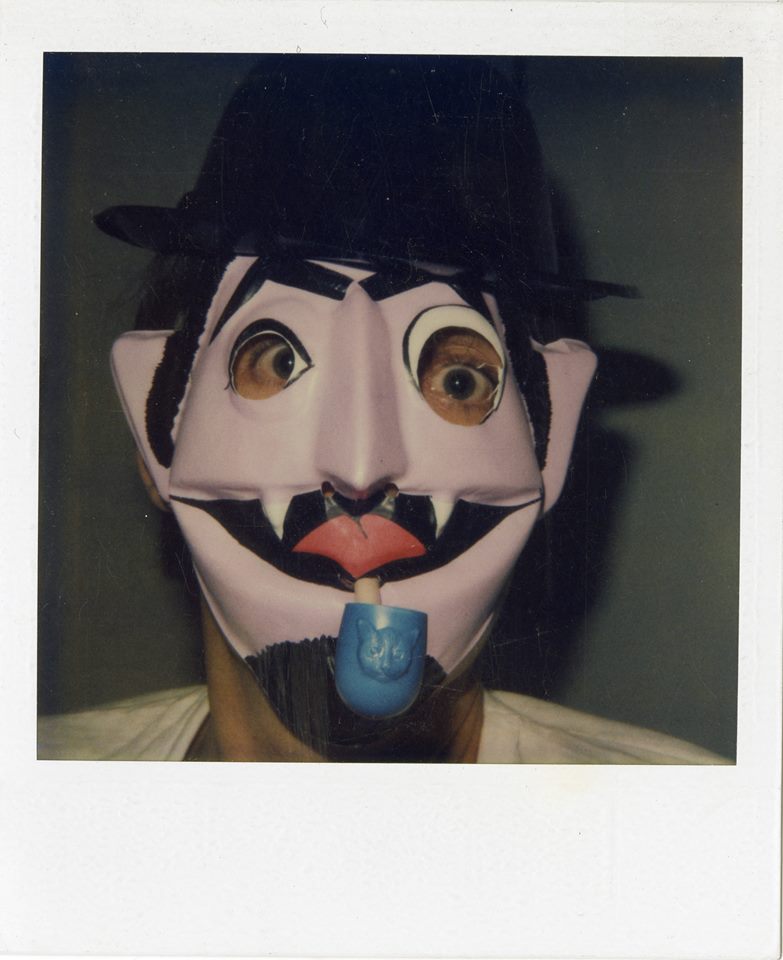 Three guesses as to who’s under that Count mask.  No, not him.  Not him either.  Give up?  That’s Sir Paul McCartney!  What, you don’t believe me?  Fine, but that doesn’t make it any less true.  Can’t you just hear him singing “All Together Now” as The Count?  “One, two, three, four, can I get a little more? Five, six, seven eight nine ten, I love you.  AH AH AHHHHH!” 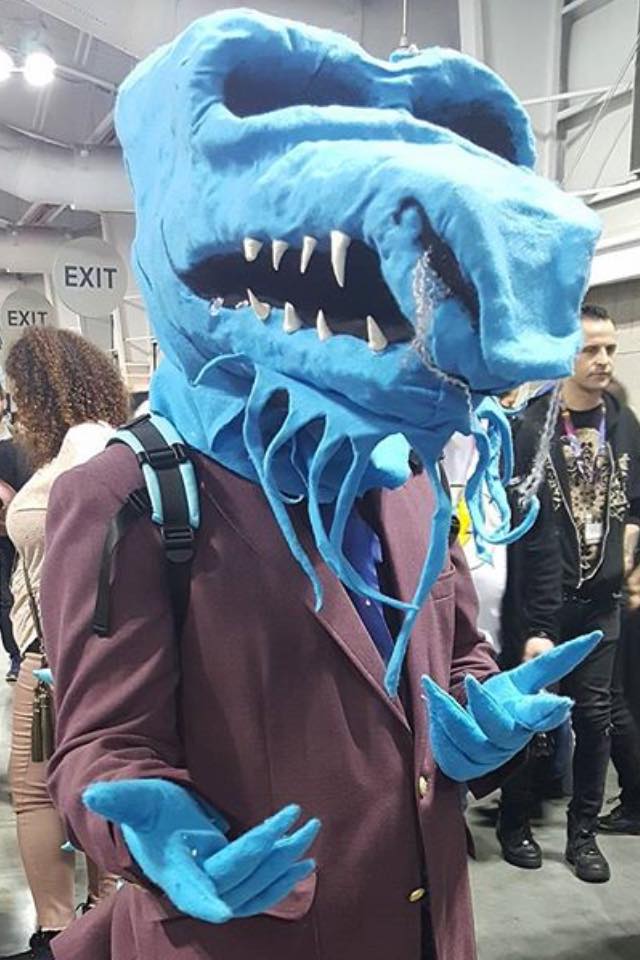 The winner (which doesn’t actually mean anyone gets a prize, other than the admiration of millions) is this Uncle Deadly.  The crafting of that giant head, the appropriately pointy fingers, and the fact that they obviously jumped on the Deadly bandwagon with the rest of us after his scene-stealing in the recent Muppet TV show really make this costume worth applauding.  Honestly, if you asked me to design an Uncle Deadly costume, I’d be at a loss.  So to see someone actually achieve it is remarkable.  Well done, Deadly.

Many thanks to everyone who submitted their photos!  Again, if you’re dressing as a Muppet, Fraggle, Grouch, or other Henson creation, send us a photo to be included in next year’s Halloween Parade!

Click here to dress as a Kermit meme on the ToughPigs forum!