We’re continuing our grand annual tradition that we’ve been upkeeping since 2002 – The ToughPigs Halloween Parade!  We’ve been collecting all the Muppet, Sesame Street, and Henson costumes we could find over the past year, and we’re sharing them with just enough time for you to be inspired to create one of your own.  Y’know, assuming you work super last-minute and have some extra costume-making skills.

If you have a Muppety Halloween costume of your own, be sure to send a picture to us to be included in next year’s Parade!  Sure, a year is a long time to wait, but it’s worth it. 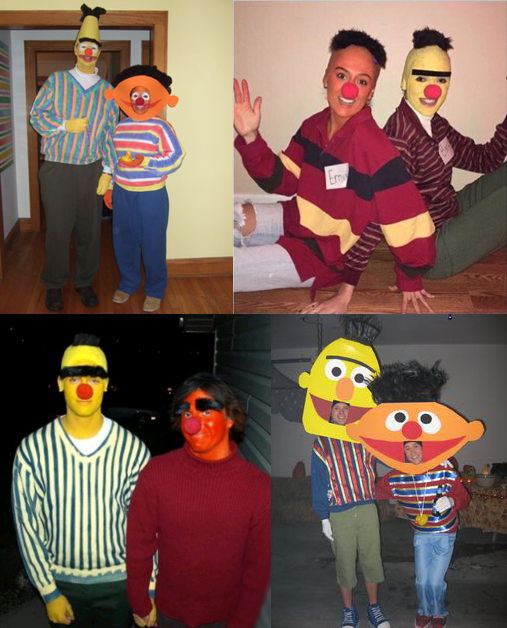 Berts and Ernies were a popular choice this year, but I think some people overestimated the size of their heads.  Or the existence of Ernie’s eyebrows.  Or they thought they weren’t recognizable enough, so they had to wear nametags. 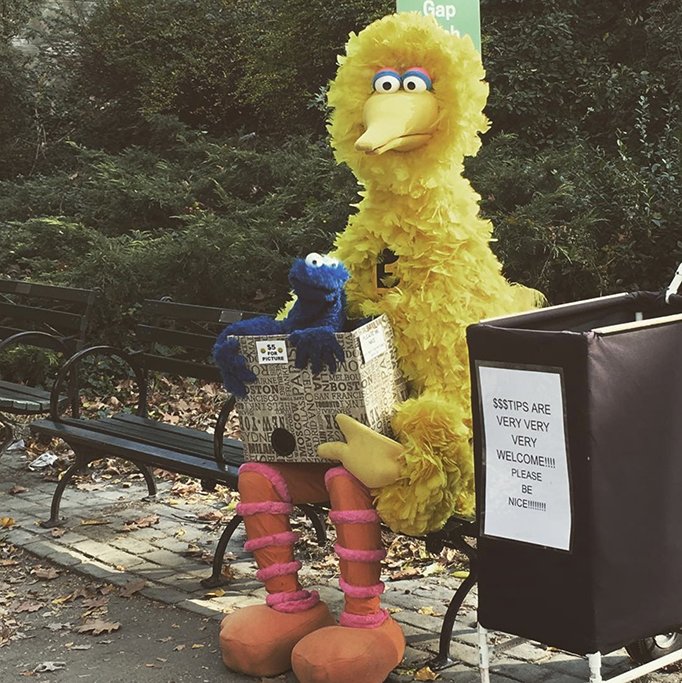 I really appreciate the “Oscar and Bruno” style of puppetry for Cookie Monster here, even though it makes it look like she shrunk in the wash.  (Which is not a terrible idea… that way, a normal cookie is twice the size for that little blue guy to devour.)  But I especially love the attention to detail when it comes to Big Bird’s leg rings.  What function do those things serve anyway?? 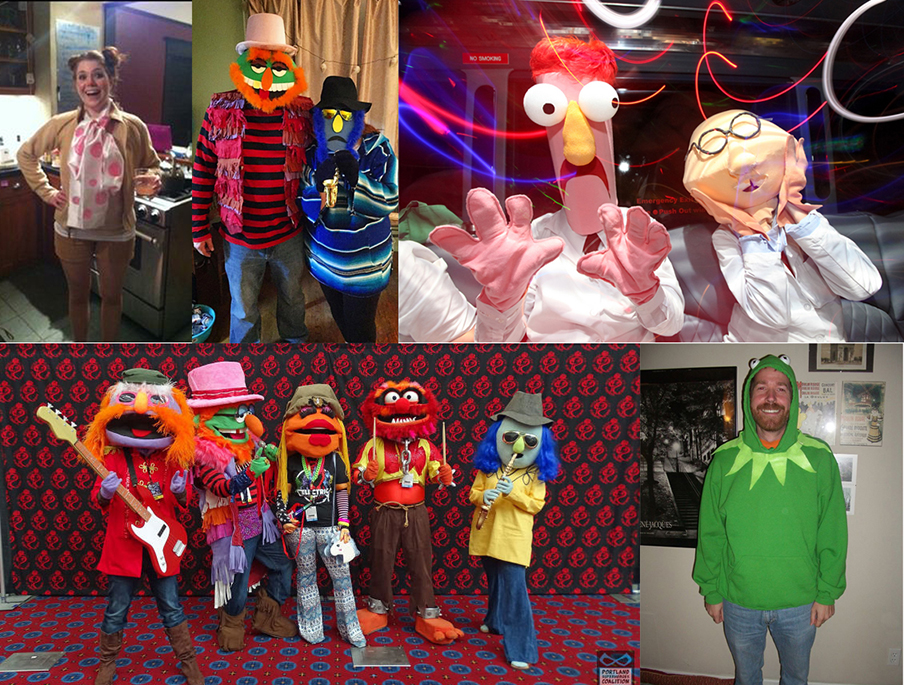 This was a light year for Muppet Show costumes.  I thought I’d see more Beakers and Swedish Chefs, but I do love the casual Kermit and Fozzie seen above.  And that may be the greatest Electric Mayhem group cosplay I’ve ever seen.  Well done! 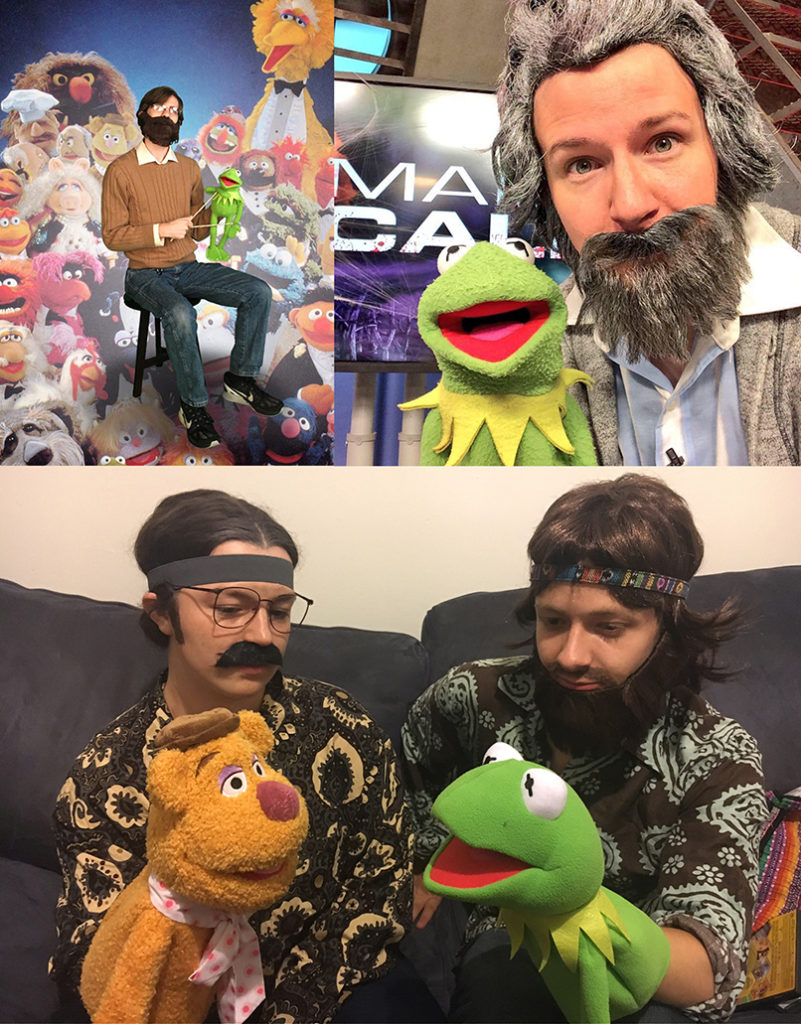 Jim Henson costumes are easy: Just slap on a beard (or go old school and grow one for yourself), put on a Kermit puppet, and you’re done.  But all three of these pictures went the extra mile: Photoshopping into a classic Muppet photo, dressing as a time-specific Jim (looks like around 1988 Jim to me), and pairing with a Frank Oz (complete with headbands!!!) for one of my favorite cosplay photos of the year. 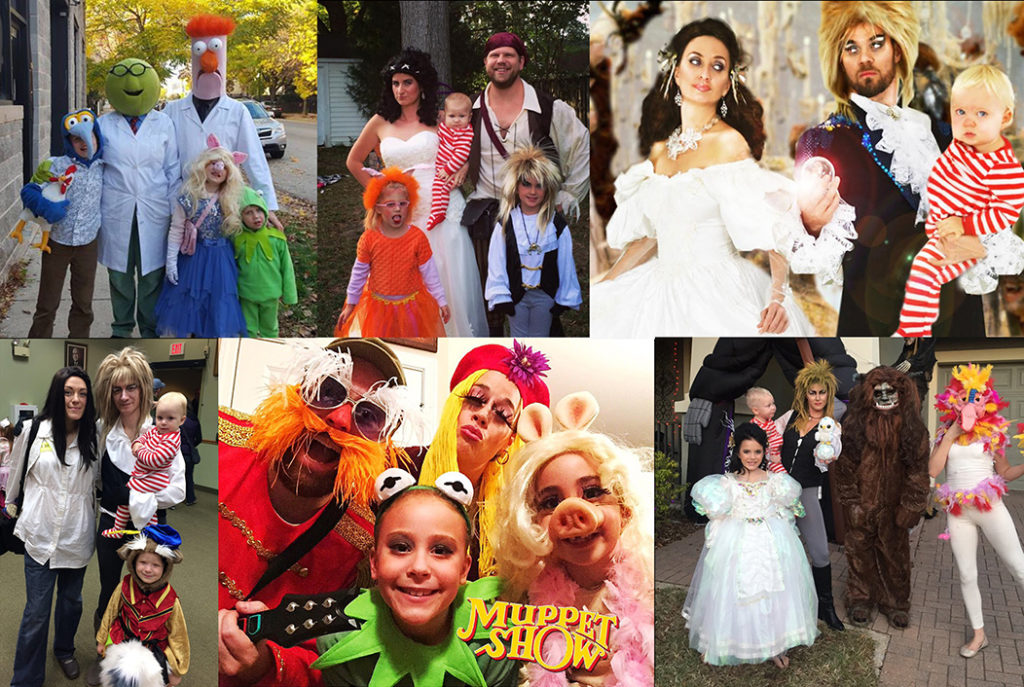 The Muppets and Labyrinth were popular group costumes this year amongst families.  Some of these are particularly clever, especially the two Fireys and Sir Didymus.  Putting a baby in a striped onesie is one thing, but recreating Didymus’s costume is simply good parenting. 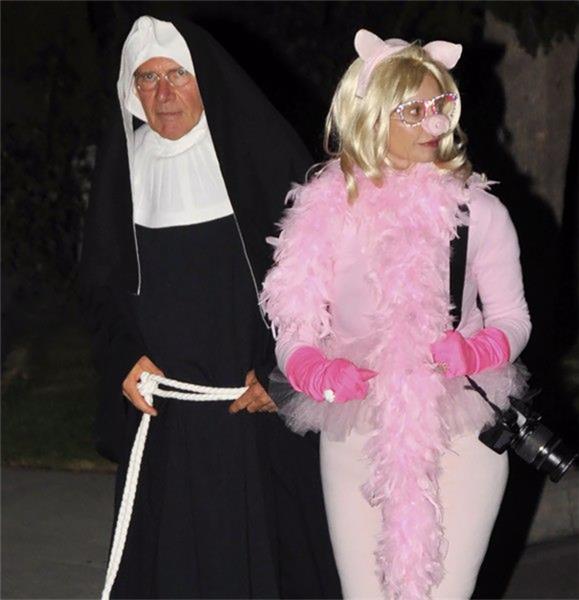 Oh hey, is that Hollywood’s Calista Flockhart dressed as Miss Piggy??  Why, yes it is!  And she even brought along her nun friend, who is dressed as Sister Harrison Ford. 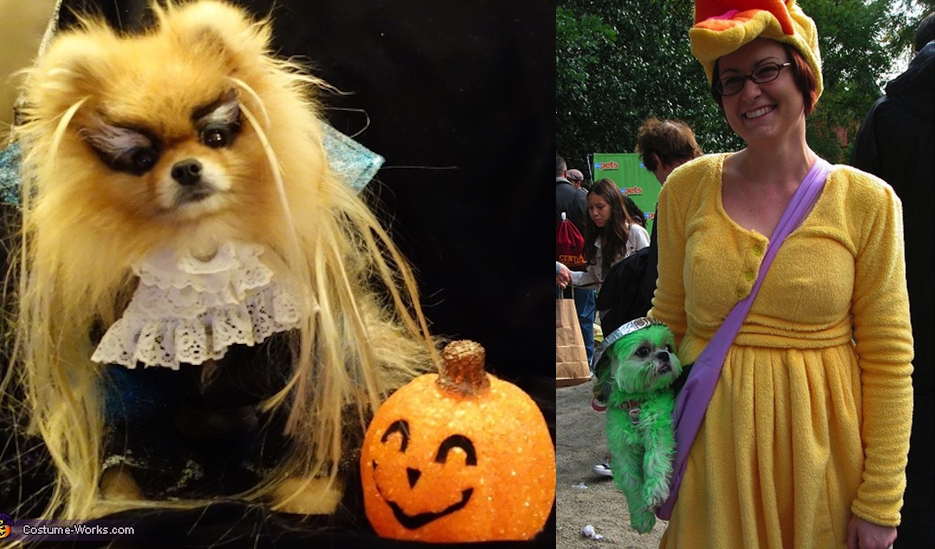 Doogos and puppers aren’t left out of the Halloween Parade this year.  We’ve got a furry Jareth and a four-legged Oscar, both of whom are very, very good boys. 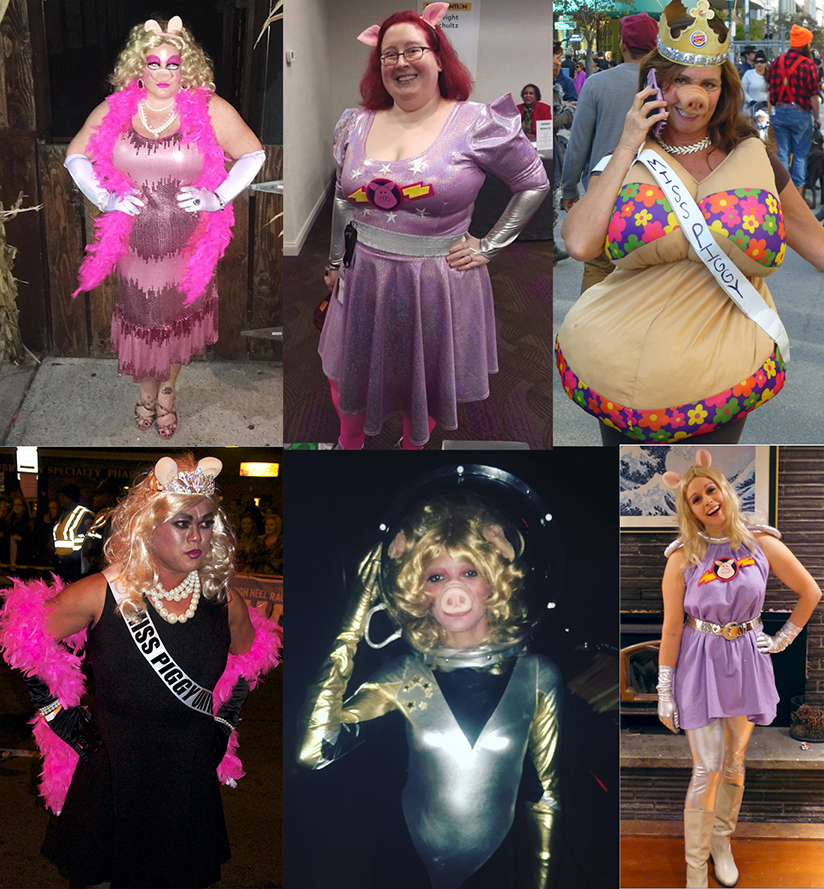 Miss Piggy came out for Halloween in full force, in many variations.  First Mate Piggies, beauty queen Piggies, one inexplicably obese Burger King-loving Piggy… Kudos to the astronaut Piggy in the middle, who may look like an off-brand First Mate Piggy, but looks more to me like Miss Piggy from the parody cover of OMNI magazine. 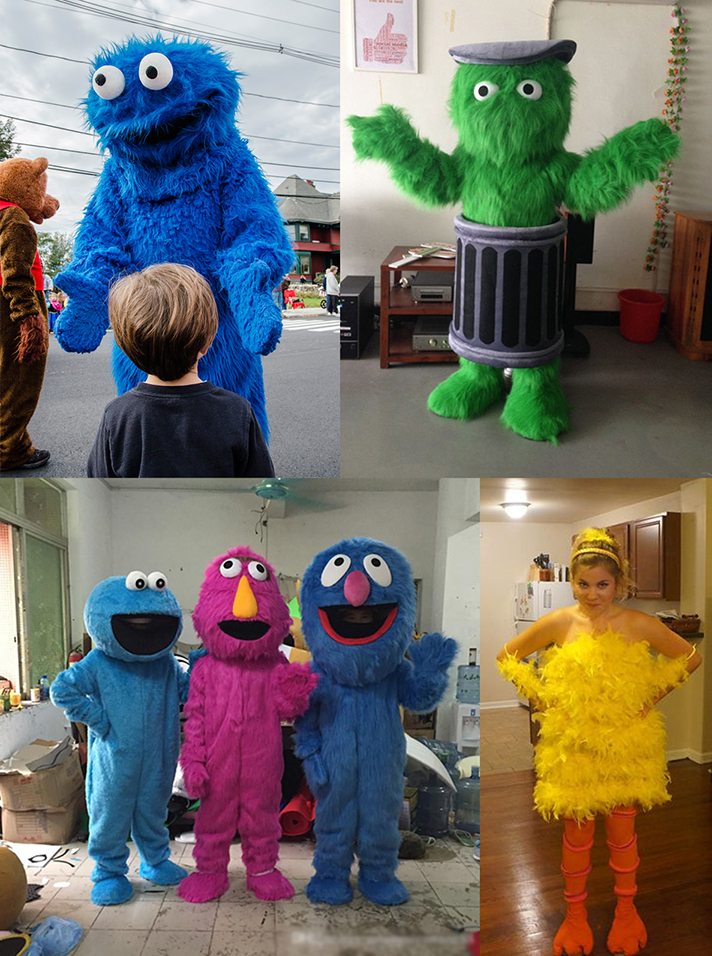 A lot of people dressed as the characters from Sesame Street this year, finding new says to terrify children. 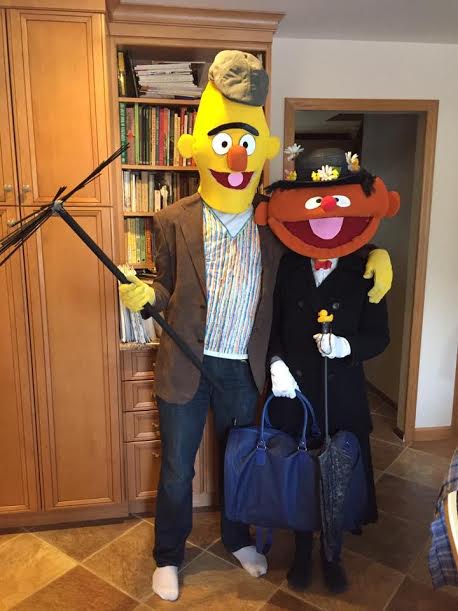 Occasional ToughPigs contributor Michal Richardson built these Bert and Ernie as Bert and Mary from Mary Poppins.  Somehow, I’m more disturbed at the idea of Bert as a chimney sweep than I am at Ernie in drag. 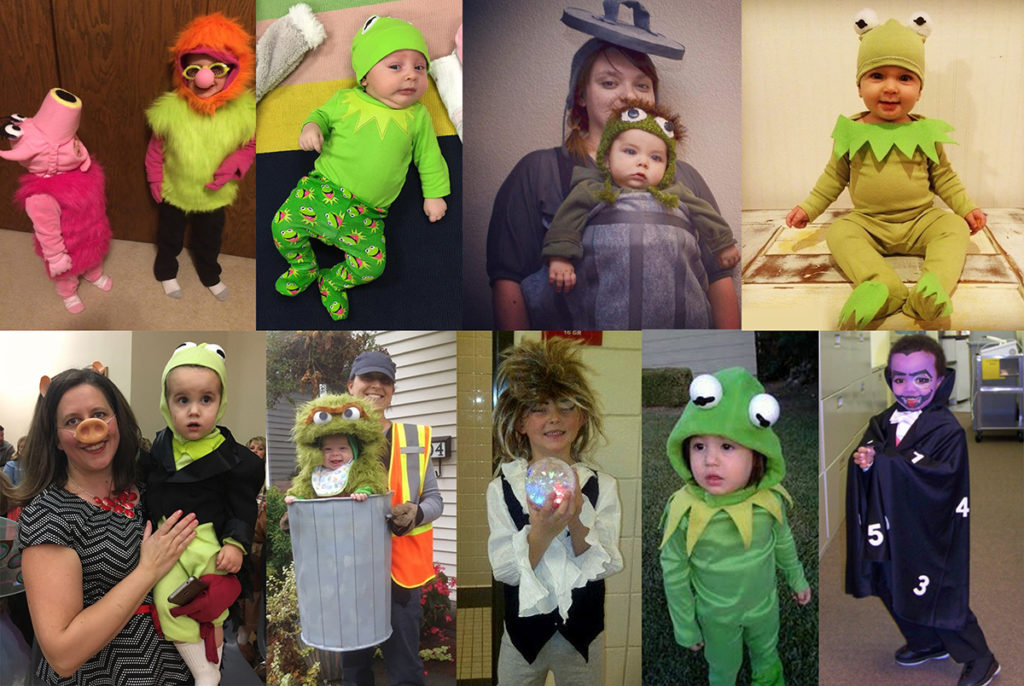 Who let all these children into our Halloween Parade???  Don’t they know that dressing as Muppets is a grownup thing?  Okay, we’ll let them in this year, but only because they’re so darned cute I can’t stand it.  Next year… we’ll see. 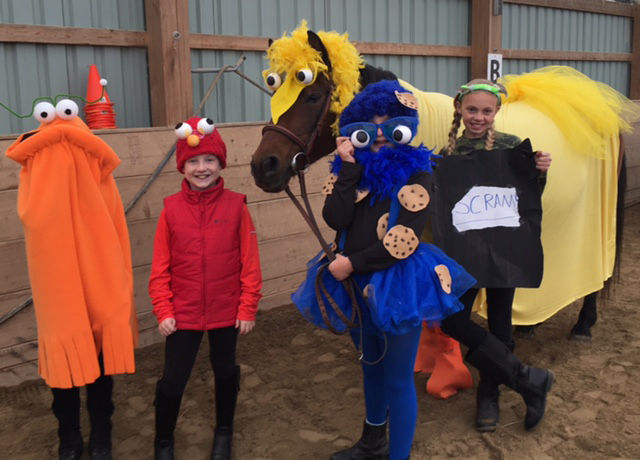 Look, it’s impressive and everything that these kids dressed a horse up like Big Bird, but I’m only slightly disappointed that they didn’t go with Snuffy.  Not because it would look better, but because I’ve always wanted to ride a Snuffleupagus.

Any interest in building your own costume of Ludo from Labyrinth?? Well, I have no advice for you – I’d have no idea where to start.  Thankfully, the folks who made this YouTube video have more information than me. 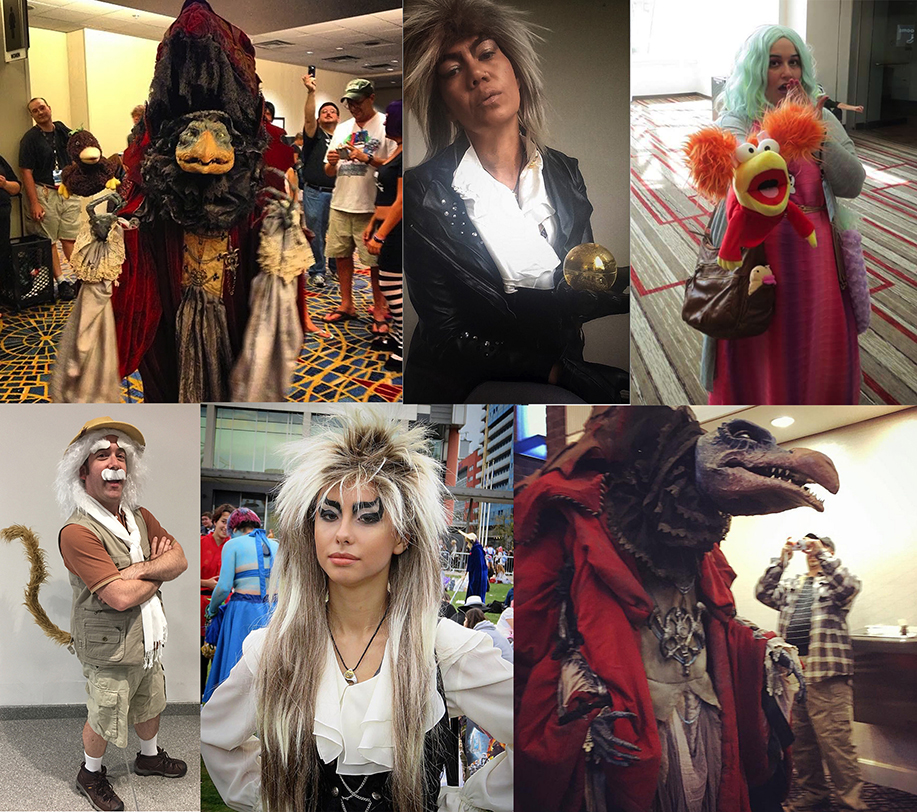 Hey look, even more Henson costumes!  I appreciate the juxtaposition between the simplicity of a Jareth costume (Tina Turner wig, Seinfeld‘s pirate shirt, and a glass Christmas ornament) versus the elaborate Skeksis (built with ???).  Oh, and why not a couple Fraggles in street clothes and silly wigs too? 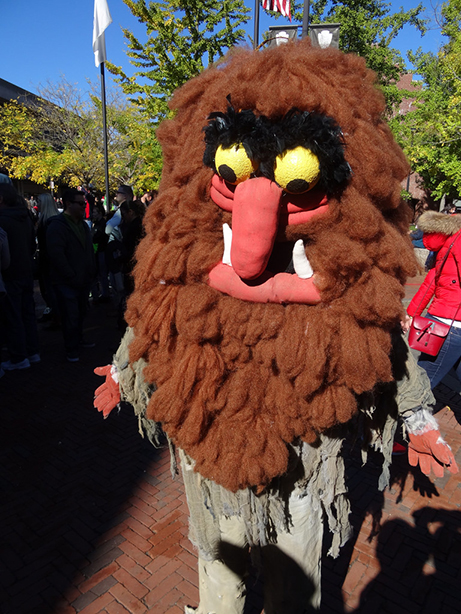 Stuck for a Halloween costume idea?  Got a blanket and two Styrofoam balls?  Unsure about the definitions of simple words?  Sounds like you’d make a great Martian.  Start practicing your “yip-yips” now. 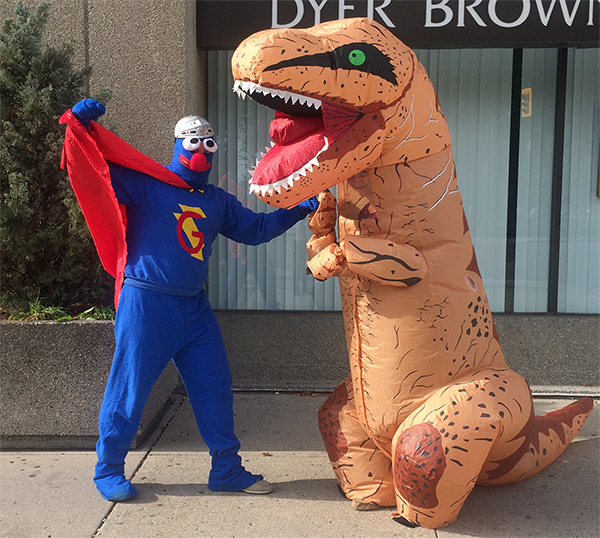 Look, I’d be excited about this Super Grover costume even if it was on its own.  But fighting a dinosaur?  This is the hero we need. 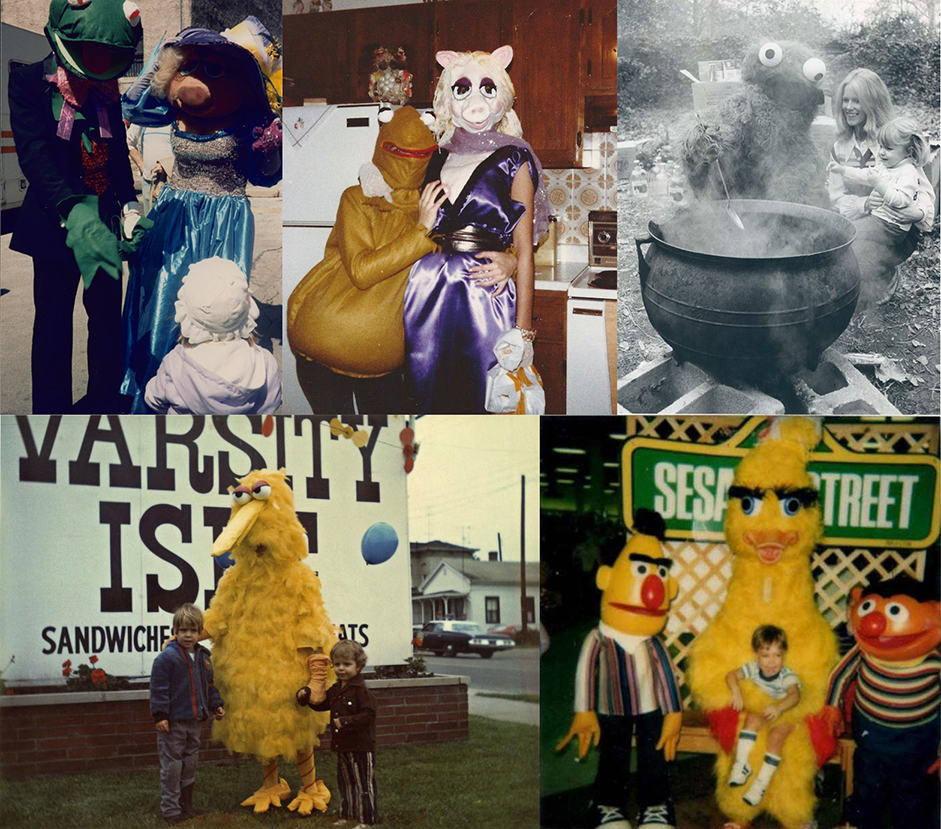 Why should Halloween costumes be limited to just people of today?  Lots of people dressed like Muppets in the past, and they were never not terrifying.  Exhibits A through E: The nightmares seen above. 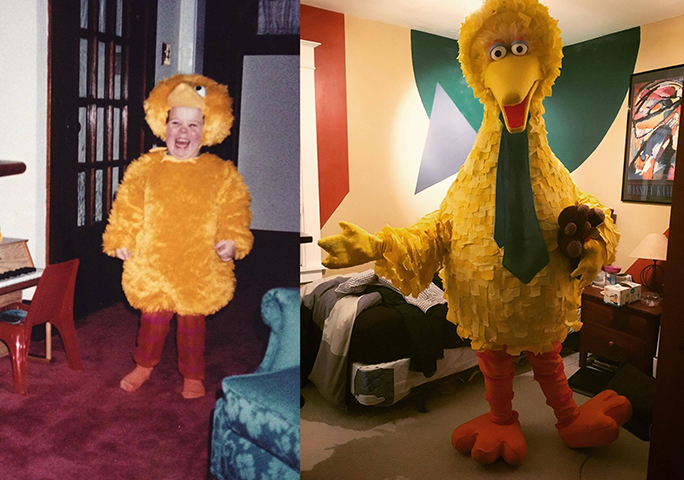 Speaking of vintage, ToughPigs friend Cameron Garrity sent us this pair of photos, one from his childhood and one from this year.  It goes to show, if you stick with it, you can be anything.  Including Big Bird. 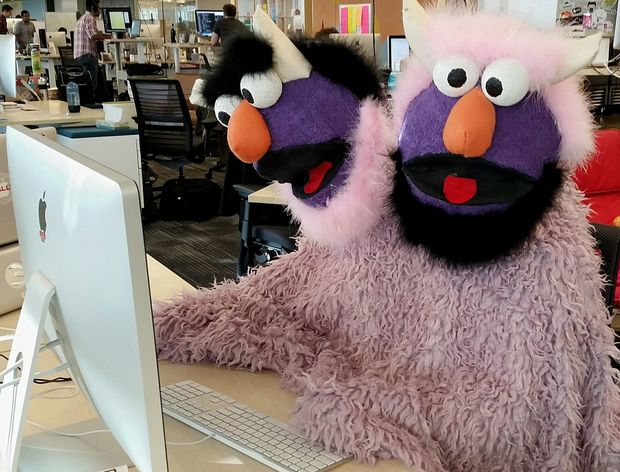 The winner of the 2017 Halloween Parade (if winning was a thing that was possible in a parade) is this Two-Headed Monster.  I don’t know how many people are in that thing, how they see, or even how they breathe, but I am impressed.  You’ve got the job, 2HM – we’ll see you at the office first thing Monday morning.

Many, many thanks to everyone who submitted photos for this year’s Halloween Parade!  If you or someone you know dressed in a Muppet, Sesame, or Henson costume this year, please send the pictures our way!

Click here to fight a dinosaur on the ToughPigs forum!