Many thanks to Ryan Roe, Sarah Grace, Staci Rosen, and Matt Soberman for their help with our Comic Con roundup! It’s a team effort!

It’s sad that the New York Comic Con, much like Veteran’s Day, only comes once a year.  But we are grateful to have the opportunity to really let our geek flags fly during this weekend-long holiday and rejoice in all things comics, pop culture, and general nerdiness with our fellow fanatics.  It’s nice that Muppet culture has made its way into the underbelly of Comic Con, and as we said in our list of Muppety stuff to see at Comic Con, it absolutely made its presence known.

We attended panels, met writers and artists, photographed cosplayers, and went searching for merchandise all related to the Muppets, Sesame Street, and Jim Henson.  And while that public menace Spider-Man got more attention than Kermit, we still managed to find a ton of stuff to report back to you guys.  So let’s take a look at the Muppety stuff we spotted! 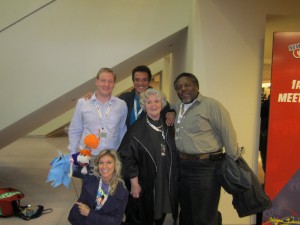 Cultivating the Creative Energies of Your Students with Comic Books, Puppetry and the Arts

This panel, which was held at the unfortunate time of 1:15pm on Thursday (which is already not open to most con attendees).  It also didn’t actually include the words “Sesame Street” or “Muppeteers” in the title, so it was sort of a gem to find and have the chance to attend.  Of the five panelists, three had strong Muppet connections: Leslie Carrara-Rudolph, Noel MacNeal, and Bonnie Erickson.  The panel discussed ways in which the arts and, more specifically in the cases of the three I just mentioned, puppetry can help in the classroom.

The moderator, educator and ToughPigs friend Mike Lopez, began the panel by screening a portion of the Sesame Street pitch reel (“Why don’t we call it… ‘Hey Stupid!’).  Leslie Carrara-Rudolph talked about how the arts can be useful in helping kids deal with tragedy and budding maturity as much as education.  Bonnie Erickson spoke about how a visit from Charles Schultz to her 3rd grade class helped to inspire her toward a career in the arts.  Noel MacNeal gave examples on how puppetry can be used to teach math, fiction, history, and more in the classroom.  It was an interesting take on the subject that I rarely think about, so I was grateful for the eye-opening look at the further uses of puppets beyond funny skits about bananas in ears and eating cookies. 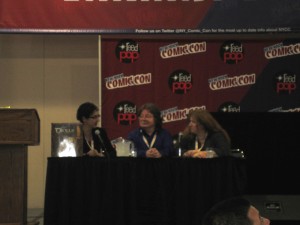 Over 30 Years with Brian & Wendy Froud: Faeries, Goblins and Trolls

The description for this panel boasted that the Frouds are “the pre-eminent faerie artists in the world and the go-to authorities on faeries,” and who’s going to claim any different?  During the all-too-brief half-hour panel, they touched on various aspects of their careers, but much of the focus was on two new projects. One is a book called Trolls, which the Frouds say contains their most fully-developed fantasy world since The Dark Crystal. The other is a new app for iPhone/iPod/iPad called Froud Meditations: Pathways to Faery. It’s designed to allow the user to “access your own imagination and creativity and help you find the pathway to Trolls, Faeries, Elves, and The Wise Ones.” It sounds pretty far out, and I’m intrigued by the idea of meditating with Froud creatures, but I think I’d be afraid of conjuring a Fiery or something.

The Frouds met while collaborating with Jim Henson on The Dark Crystal, so they talked about that for a while — Wendy explained how Michael K. Frith found her after buying a puppet she had made, and called her in to work on The Dark Crystal. Brian later talked about his first conceptual sketch for Labyrinth, which depicted a human baby surrounded by goblins.  As you probably know, the baby in the film was eventually played by the Frouds’ son Toby. Toby, the Frouds divulged, is now in his late 20s and recently worked as an animator on ParaNorman. Another topic touched on was the difference in preparation for The Dark Crystal vs. Labyrinth — it sounded like the process for The Dark Crystal was that they would design creatures first and then work them into the world of the movie, but Labyrinth was planned out more deliberately before production.

That led to an interesting point which I don’t remember having heard before: When Jim Henson brought Terry Jones in to write the screenplay for Labyrinth, he started by looking through Brian Froud’s sketchbooks for inspiration.  When he came across something he liked, like a picture of a talking door knocker, he would say, “Oh, that should be in the film,” and write it in, and then the Creature Shop would have to build it. 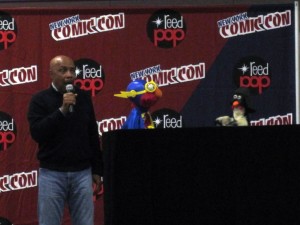 There were a lot of big celebrities at New York Comic Con this year (Christopher Lloyd! Burt Ward! The green Power Ranger!), but was there any guest whose fans responded as passionately as Elmo’s? I doubt it.

The Sesame Street event opened with Gordon bounding onstage and singing “Welcome to the Party,” to the cheers of at least a hundred parents and children. After the song, Gordon’s friend Elmo popped up, wearing a superhero costume.  Gordon was dubious when Elmo claimed he was Batman. This was only the first of several geeky references in the show… Whoever wrote the script really knew how to write for the Comic Con crowd, throwing references to the Green Lantern, the Green Hornet, the Green Arrow (Sesame Street teaches colors!), the Terminator, Princess Leia and the planet Alderaan, and Doctor Who.

While Elmo took a quick break, Gordon led the crowd in a rousing rendition of “The Arm.”  David performed this one on the Sesame Street LIVE! record album back in 1973, and 39 years later, dancing with your arm, your leg, your head and your thumb hasn’t gone out of style.

When Elmo returned, he led the audience in making animal noises to accompany Gordon’s song “I Heard My Dog Bark,” which was followed by a game of Guess What Gordon’s Pretending to Be. You know, Gordon’s not as young as he used to be, but he is still fantastic at pretending to be a train and a rock star. When it was time for Guess What Elmo’s Pretending to Be, Elmo asked Gordon to assist by blowing into his nose, then proceeded to pretend to be a balloon (as seen in Being Elmo!).

But Elmo wasn’t just there for fun and games. He was also promoting “Elmo the Musical” on Sesame Street, and he even brought a highlight reel.  Poor Gordon asked Elmo more than once if there was a part in the musical for him, but Elmo shot him down every time. To be fair, though, that was mostly because the “Elmo the Musical” all takes place in Elmo’s imagination, and on that note, Elmo said he was now imagining a chicken… from space… named Darth Chicken. And then, holy crap, there was Darth Chicken, right there on stage, with a Darth Vader helmet and everything! Elmo’s imagination has the power to shape reality. (The presence of this character also explained why we spotted John Tartaglia sneak behind the puppet curtain with Kevin Clash before the show started.)

Darth Chicken alternated between clucking and reciting variations on Darth Vader lines (“Gordon, I am your father”) in the closest approximation of James Earl Jones’s voice I’ve ever heard from a chicken. The audience loved it. Finally, after some more clowning around, it was time to say goodbye, so Gordon and Elmo and the chicken closed things out with a sing-along of the Sesame Street theme song and “Sing.”  It was a really entertaining performance, and if you ever get the opportunity to see Darth Chicken live, I can’t recommend it highly enough.

Artist Alley was a veritable gold mine for Muppet stuff this year.  We normally see some great stuff by Amy Mebberson, Katie Cook, and James Silvani, and although they did have tables filled with Muppety art, we walked the showroom floor and found a ton of additional original Muppet artwork!  For example… 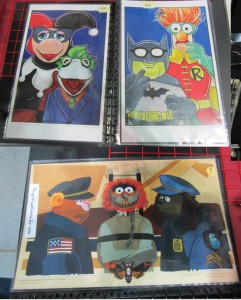 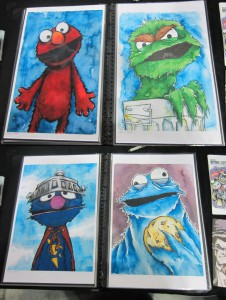 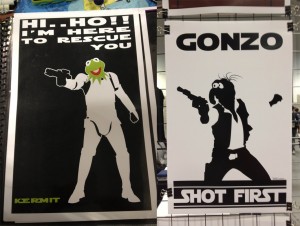 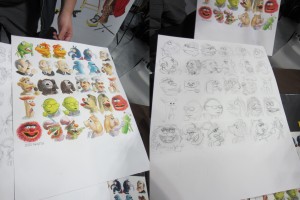 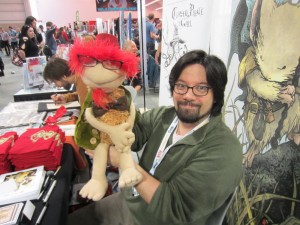 And although we’re only looking at new artists in this segment, I would be remiss not to show off David Petersen’s homemade Fraggle.  Yes, he’s not only an amazing artist and author, David also made a real Fraggle.  I seethe with jealousy at the reaches of his talent. 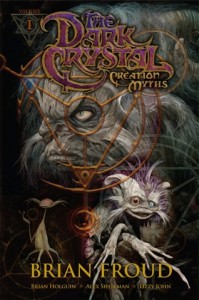 The good folks at Archaia had a few Henson-related books on display, including the award winning, we-can’t-stop-raving-about-it graphic novel Tale of Sand and the new Dark Crystal book.  They also had such talented artists as Ramon Perez, Chandra Free, and Neil Kleid autographing at the booth throughout the weekend, as well as Brian and Wendy Froud!!  It was a real treat to visit with all of them, and an even bigger treat to meet the couple responsible for everything I love about The Dark Crystal and Labyrinth. 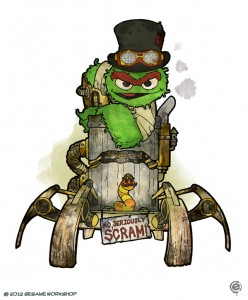 Over at WeLoveFine (or Mighty Fine, depending on what time of day it is), they were constantly mobbed with Bronies trying to get their t-shirt fix.  But if you looked close enough, you’d be able to see a new Sesame Street t-shirt being offered, illustrated by Sesame Workshop artist Evan Cheng.  It’s Steampunk Oscar, accompanied by Mustachioed Slimey!  We’ve got an exclusive look at the image above, so soak it in, folks!

The cosplay, as seen below, was out of sight.  When Muppet fans and clever costumes collide, the results are practically unbelievable.  Among the Muppet, Sesame, and Henson-related costumes we saw were Beaker, Super Grover, and Red Fraggle, a Jareth and Ludo where the Ludo’s mouth actually moved when he talked(!), another Super Grover with a homemade “Hellmo” (Elmo + Hellboy), an impressive Kermit the Frog puppet, and a Kermit/Thor mashup.  Check them all out right here: 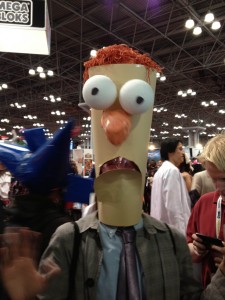 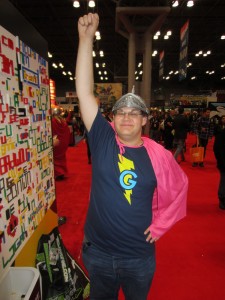 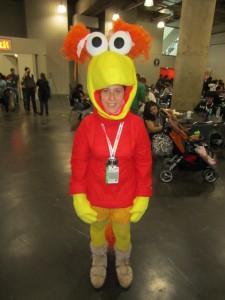 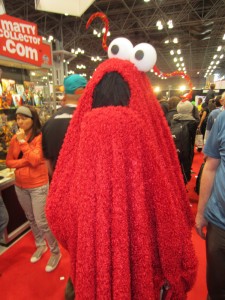 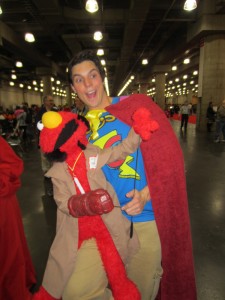 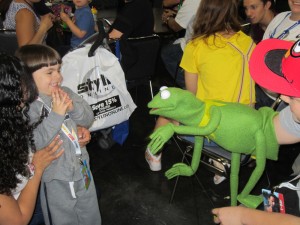 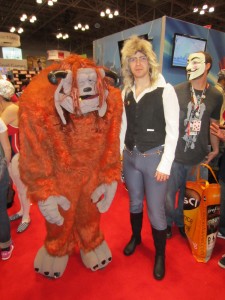 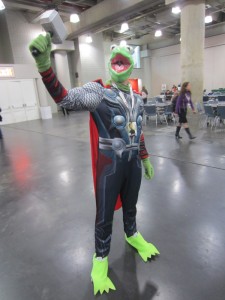 Merchandise was a little slow this year at the con.  We’re far from the days of Palisades and Gund.  But we did scope a few gems, including bootleg Muppet Babies DVDs, the Funko Pop figures, and a vintage $50 Mr. Snuffleupagus doll.  We also spotted the 2013 Hallmark Muppet ornament, which features Kermit the Frog sitting on a log playing the banjo.  The folks at Hallmark tell us that it will most likely play some sort of music, and it will most definitely be purchased by yours truly.  Check out pics of next year’s ornament and the weird, old Snuffy (and his eyebrows) below: 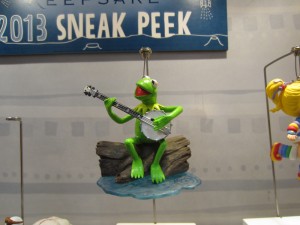 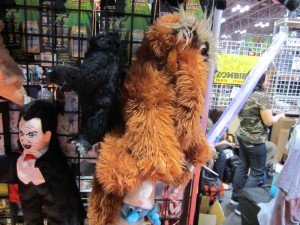 And there you have it!  Here’s hoping there’s more of a Muppet presence next year, and then more the year after that, and then they’ll get their own wing of the convention center the following year, and then they’ll just rename the whole thing “New York Muppet Con (and also comics, if that’s your thing)”.  It’s only a matter of time.

Click here to dress as Kermit, God of Thunder on the ToughPigs forum!