In case you’re not familiar with the Parade, the concept is simple.  We post a bunch of pictures of people in their Muppet Halloween costumes.  It doesn’t get much simpler than that.

So without further ado, read on for the costumes!  And remember, give the images a click to see them in far greater detail than man was ever meant to view! 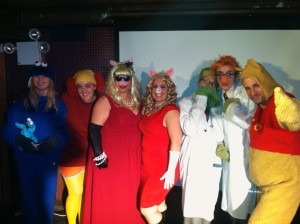 This first picture comes directly from our last Muppet Vault!  We asked attendees to dress in costume, and these were the awesome few who came dressed as Muppets (not counting Winnie the Pooh at the end, who claimed to be a poorly-dressed Fozzie Bear).  Prizes were given to the cosplayers with the most applause, so Bunsen and Beaker, the Piggy on the right, and Cookie Monster went home with some cool gifts.  But of course, everyone’s a winner when they dress as their favorite Muppet! 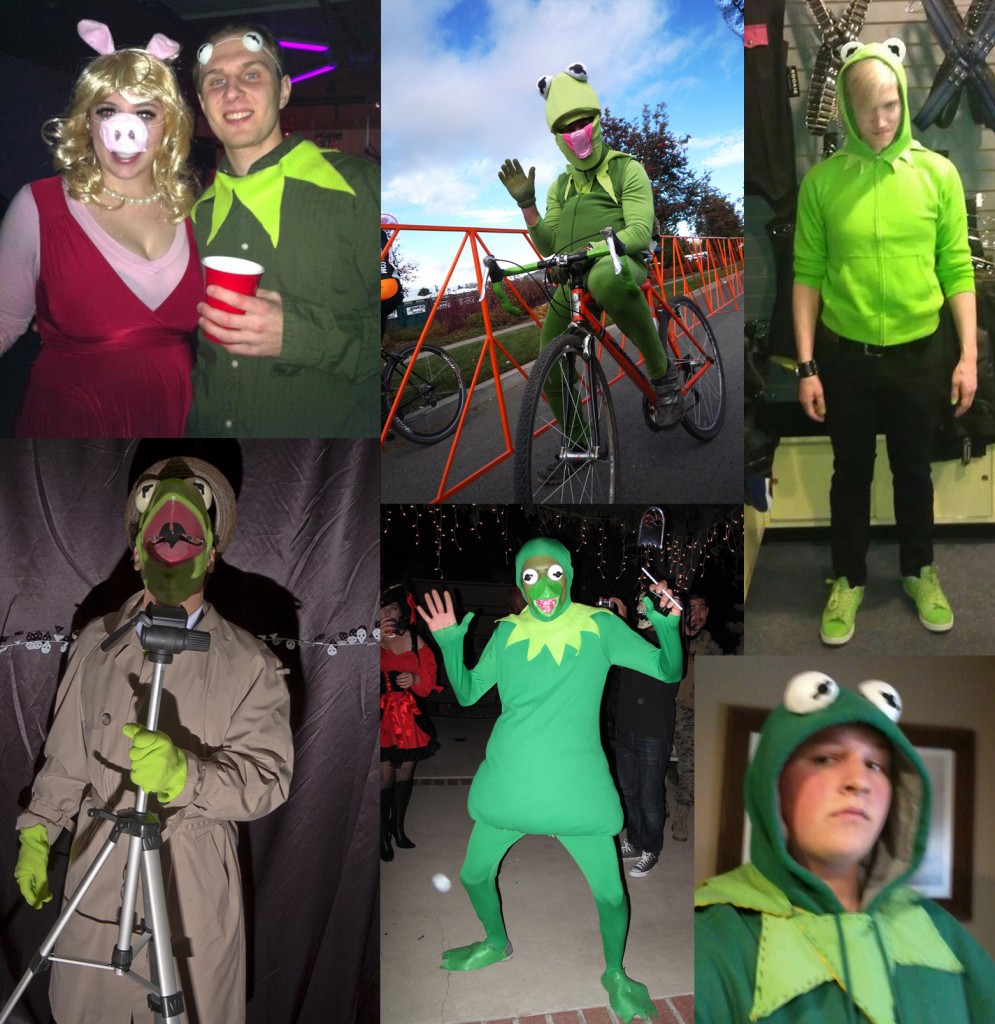 Kermit, as always, is a popular costume choice.  But a few of these guys get extra points for their dedication to the details.  Like the Kermit in the middle of the bottom row, who stuffed himself to try and get that perfect froggy beer belly.  And the Reporter variant Kermit next to him.  But my fave is the Kermit on the bicycle, which is both the perfect costume choice for a bike and the perfect accessory for a frog. 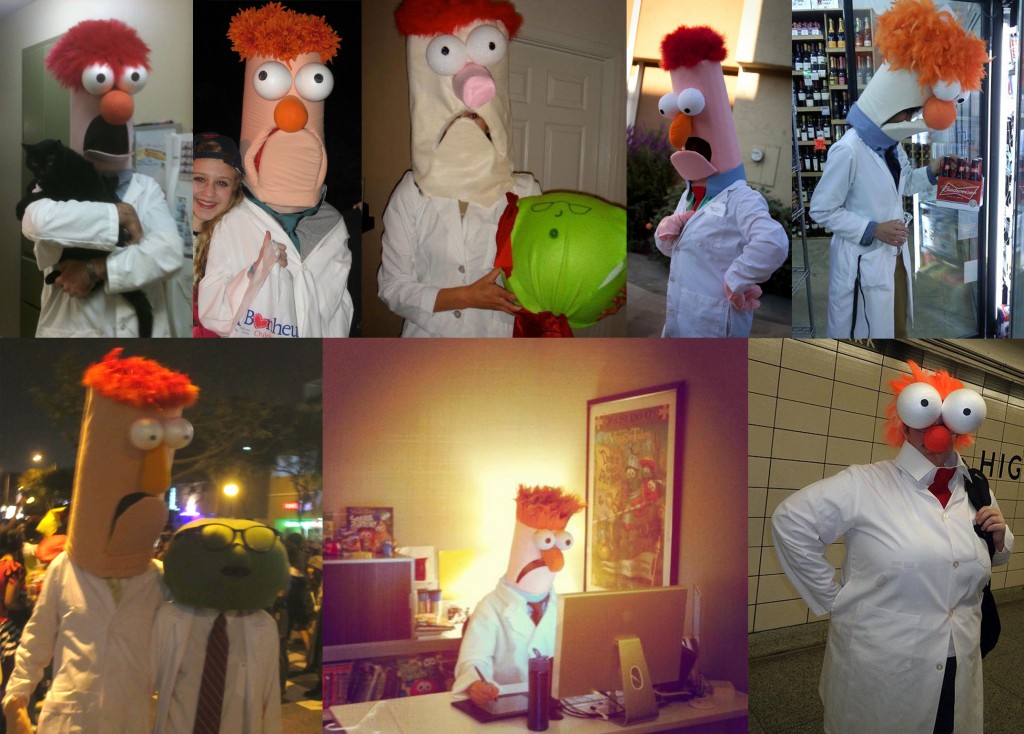 I’m always impressed by Beaker costumes, since they always seem homemade (despite the popularity of the character), and yet they all look so similar.  Then again, the Beaker on the bottom-right corner shows us what happens when you forgo the tube-shaped head for something a little more anatomically logical.  Terrifying. 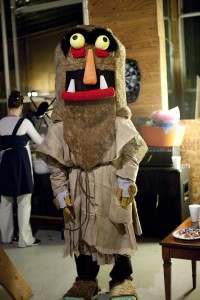 Every year, I find one amazing homemade Sweetums, each one more  impressive than the last.  This year is thankfully no exception.

Animal gets all of the best accoutrements.  Chains on his arms and neck, drumsticks, and a scooter.  Okay, the scooter doesn’t make quite as much sense, but it still looks pretty badass. 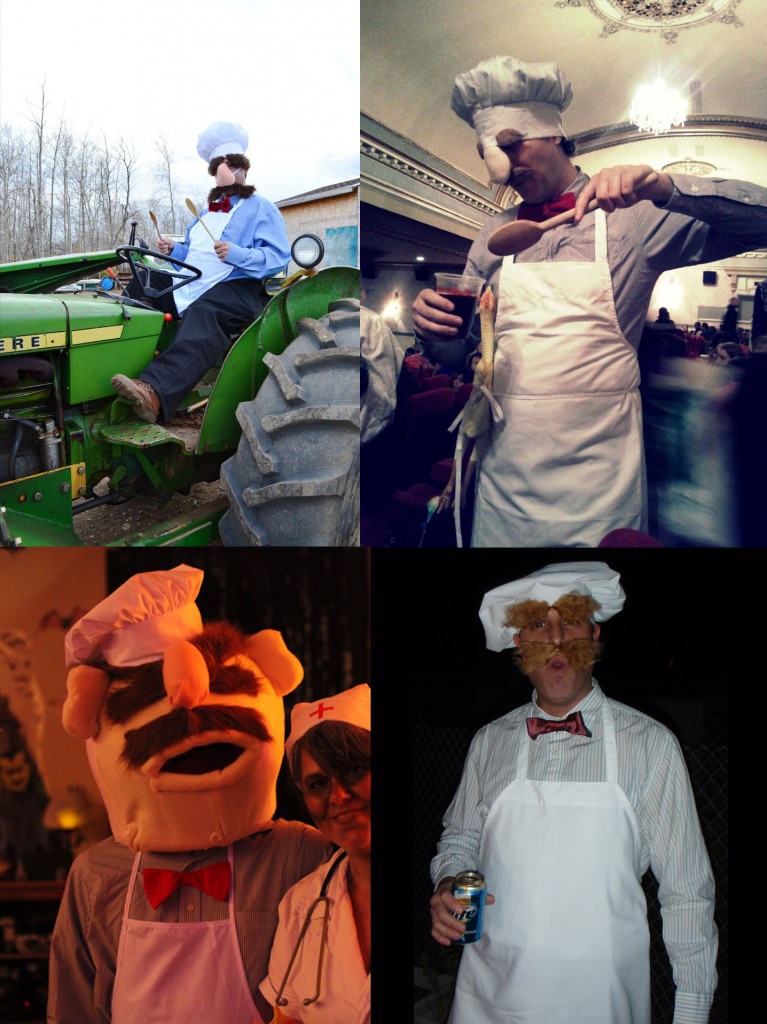 The Swedish Chef should be a pretty simple costume.  Just get an apron, bow tie, chef’s hat, and a general disrespect for the culinary arts.  But every year, I’m consistently impressed by the amount of work that people put into their Chefs.  Fake eyebrows and mustaches, plush noses, a little padding around the waist, or even giant Swedish Chef heads.  I love it when a lot of work is put into the simple to make it look effortless. 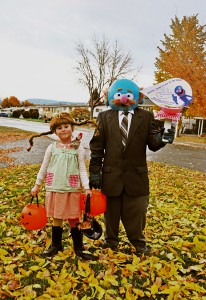 As seen in last year’s Halloween Parade, we found a picture of someone dressed as Mr. Johnson, which surprised and baffled me.  So imagine my surprise and bafflement at finding yet another Mr. Johnson this year!  My guess is that he had to go trick-or-treating because he hasn’t had a decent meal in years, and maybe he’s desperate for the candy.  Though I think we can all guess who lives at the first house he’ll stop at… 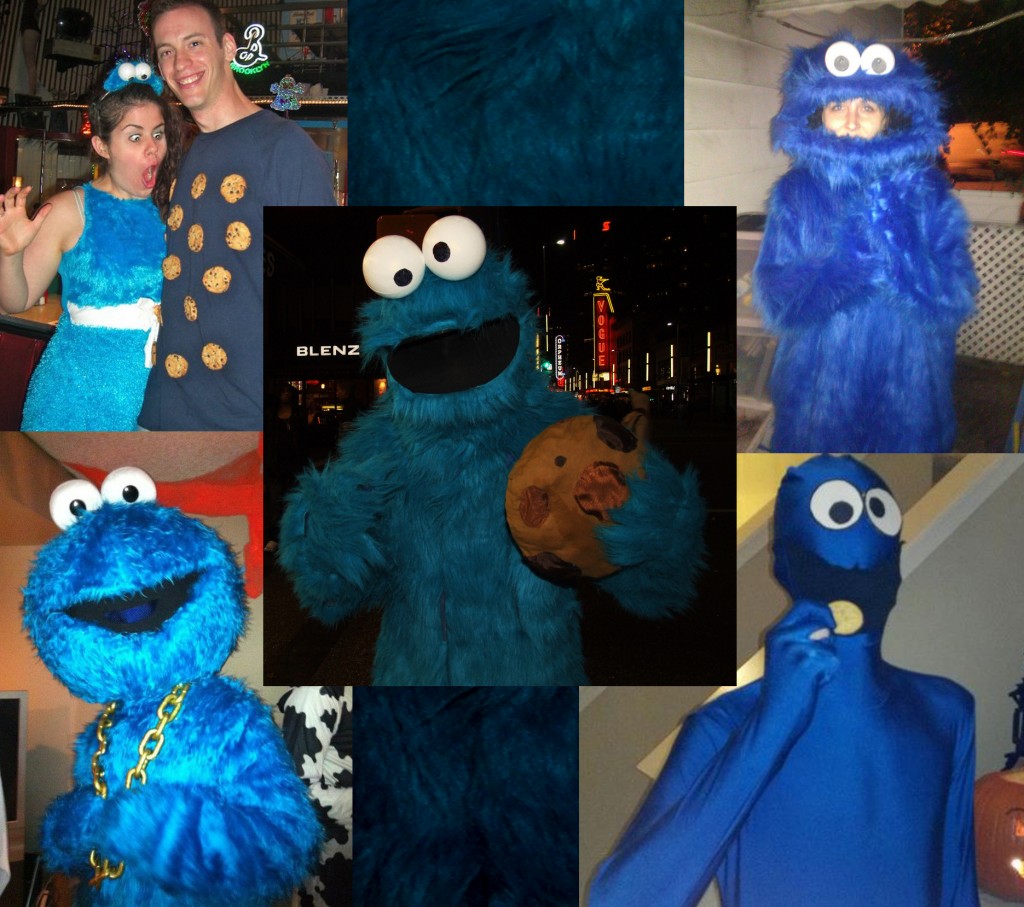 I love all of these Cookie Monsters!  The one in the middle especially, which looks just like the puppet.  I also dig the “sexy” Cookie Monster, if only for her dedication to Cookie’s facial expressions.  The guy on the bottom right, however, scares the crap outta me. 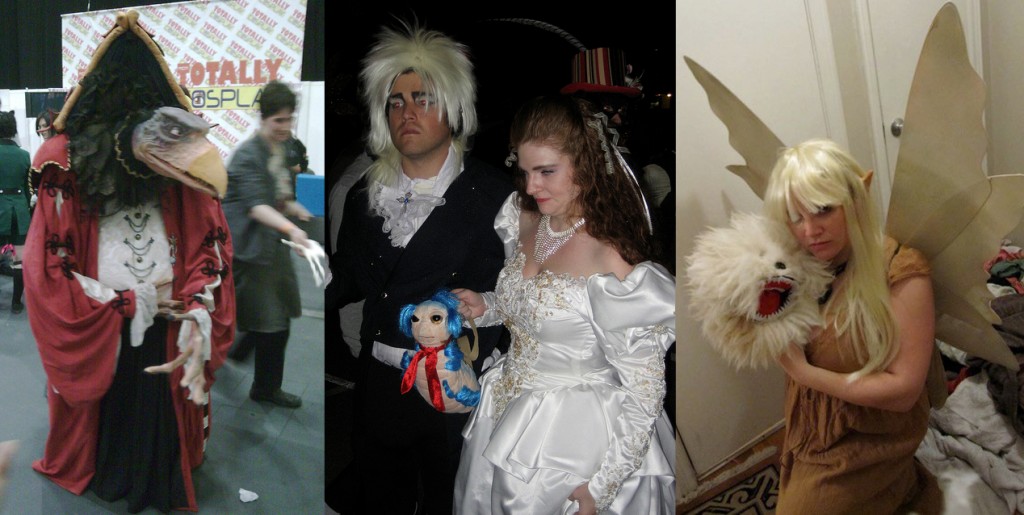 Here’s your annual dose of Dark Crystal and Labyrinth costumes.  That Skeksis costume is truly a work of art, and the Jareth costume is only so great because he brought his own Sarah (and worm!).  Kira also looks great, but her Fizzgig must’ve fallen into a tub of bleach. 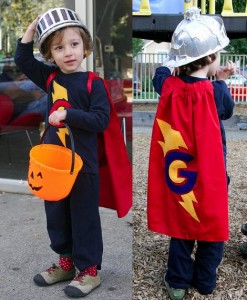 The award for coolest parents go to whoever made this costume for their kid. 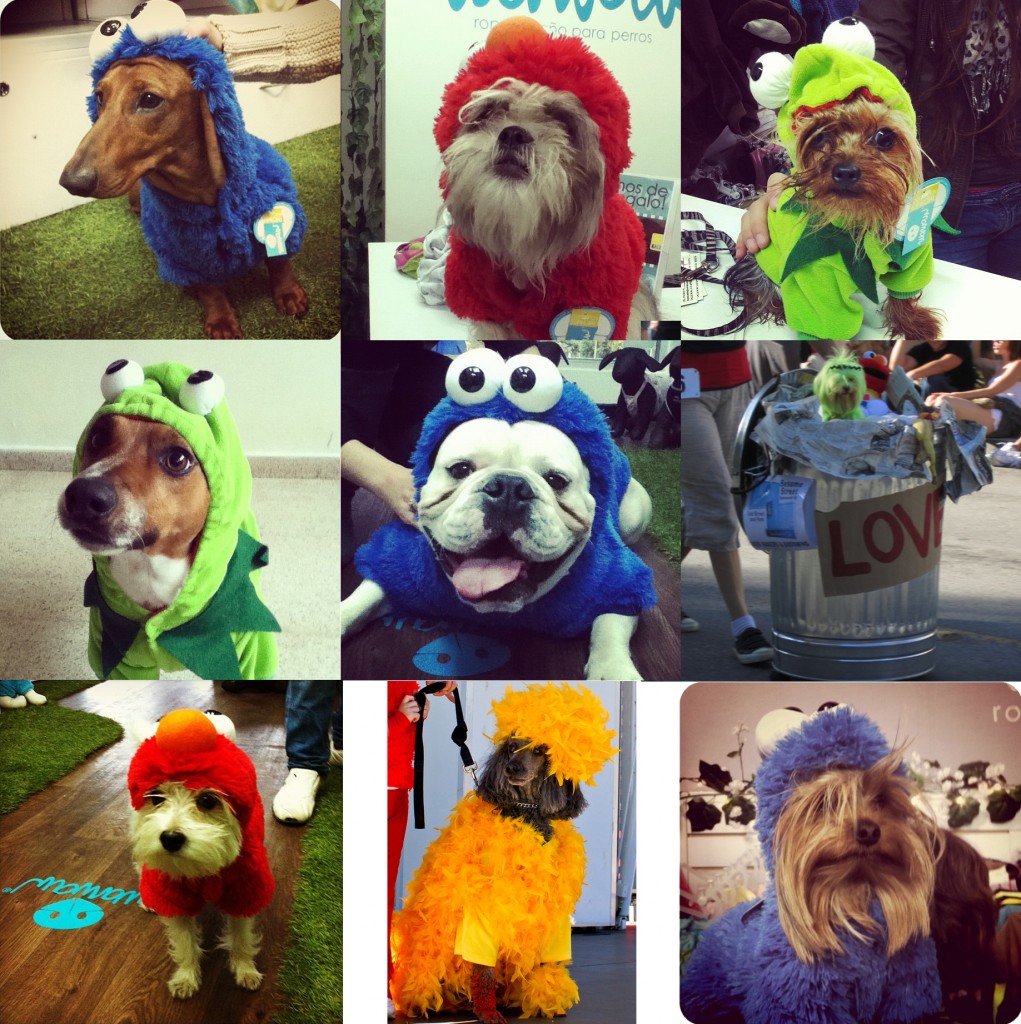 Why should the Muppet costumes be reserved for just humans?  Let’s let the puppies get in on the fun too!  The cookie-eating bulldog in the middle has truly stolen my heart.  But my favorite is the Oscar on the right, mainly because of his awesome unibrow. 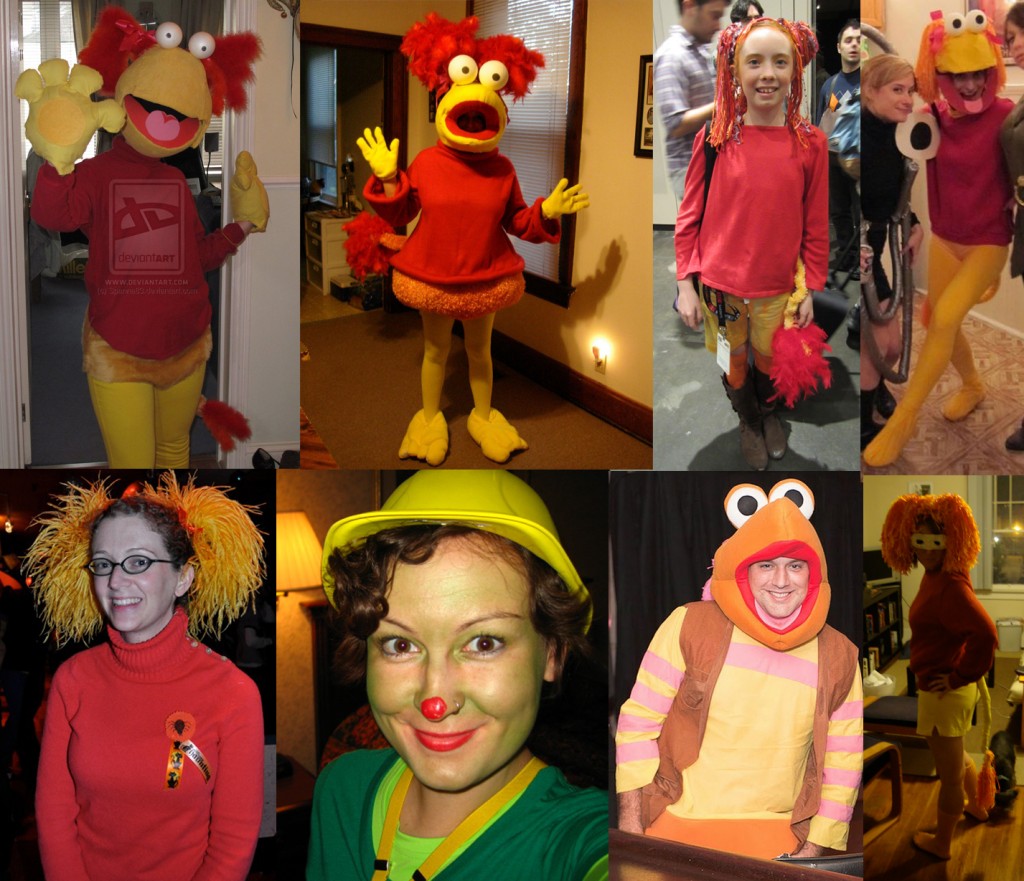 Fraggle costumes are generally a lot more rare than Muppet and Sesame ones, but it’s still interesting to see the abundance of Red Fraggles out there.  Luckily there’s a Gobo and an adorable Doozer to keep things diverse. 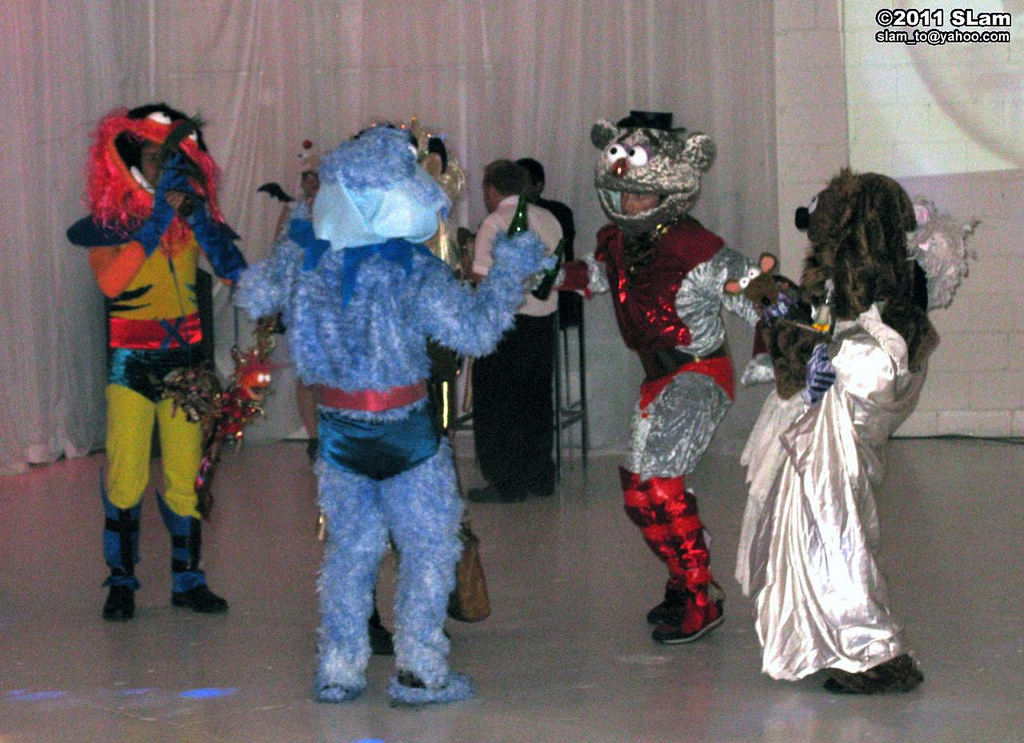 Last year, we found a picture of the Muppets as the Justice League.  So this year, the Muppets are celebrating their Disney synergy by merging with the X-Men.  This is probably the only time you’ll see a Colossus/Fozzie in your lifetime, so enjoy while you can!

Jim Henson is also an easy costume.  Grow a beard, put a puppet on your hand, and you’re done.  The Zombie Jim is a little much (and more than a little disturbing).  The chap in the middle is Muppeteer David Stephens, who went the extra mile in the form of a neckerchief (which I assume is due to photos of Jim from this era). 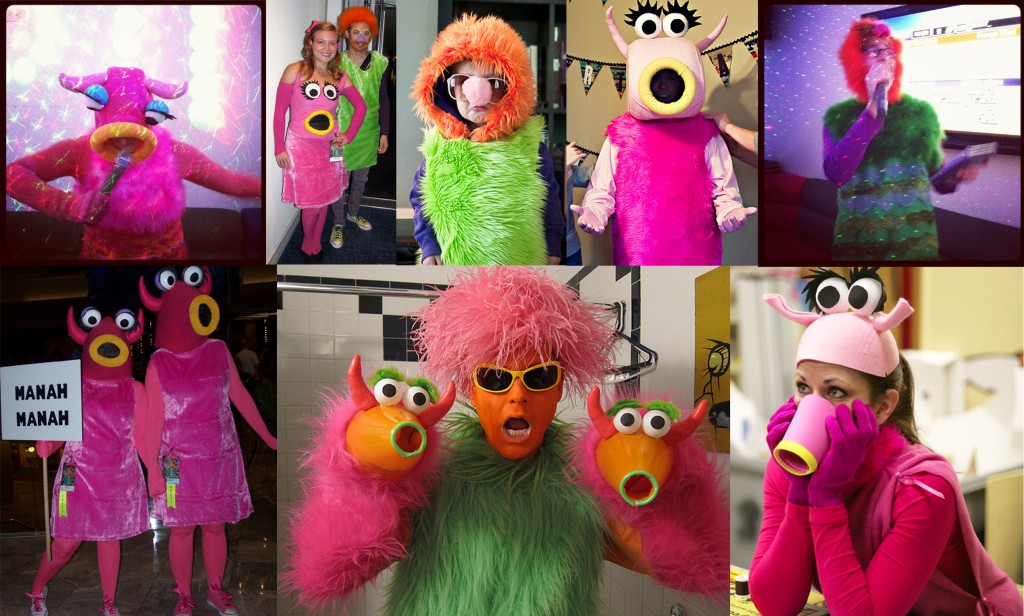 I was a little surprised at the popularity of Mahna Mahna and the Snowths this year.  What is it about that nonsensical sketch that makes people obsess to the point of wanting to dress like them for Halloween?  In any case, it’s pretty much guaranteed that all of these people would’ve had the song stuck in their head for weeks.  So don’t be too jealous of their rad costumes. 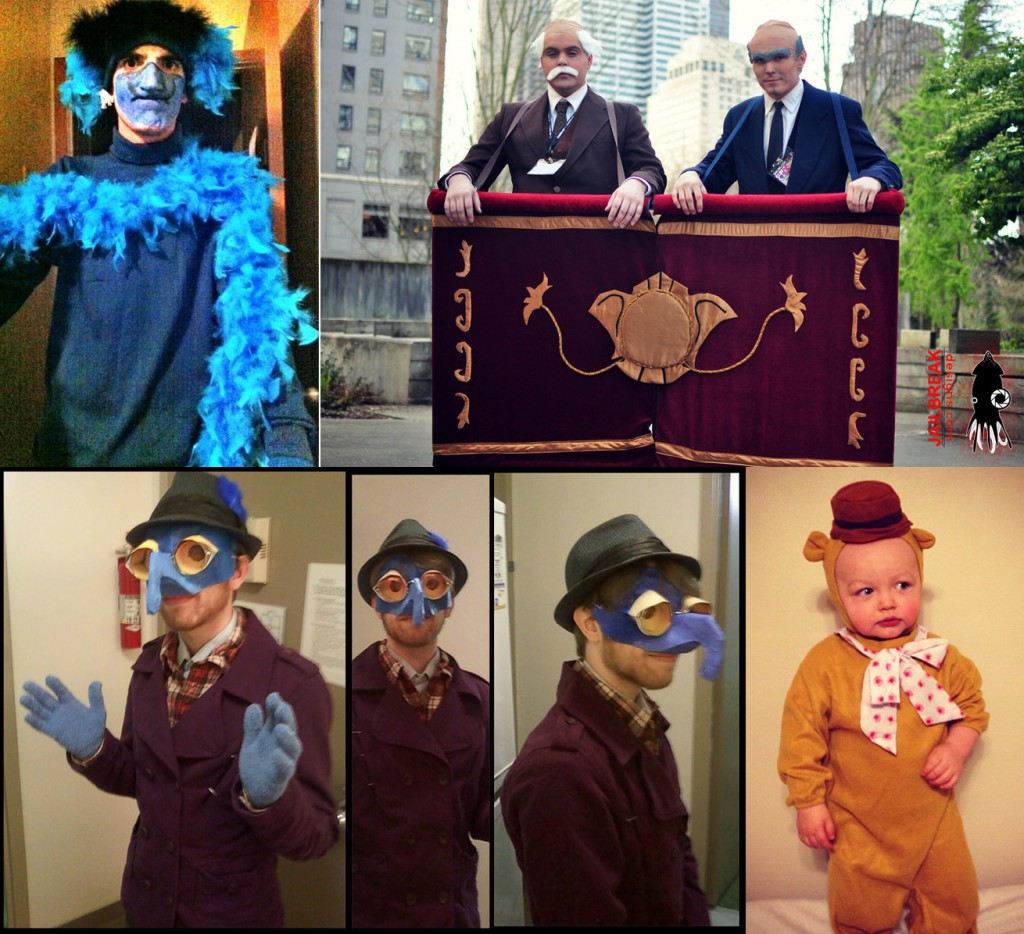 Here’s a few Muppet Show-esque costumes, including the cutest little Fozzie Bear you ever did see.  The Gonzo is great, but he looks a little more like Wesley Dodds than I’d expect.  Bonus points go to Sam the Eagle for his disapproving sneer, which is most likely paired with a real disdain for vaudevillian entertainment. 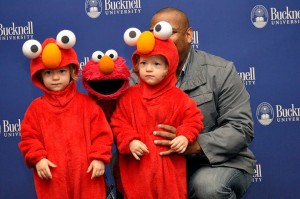 Quick! Which one is the real Elmo??  Take your time.

I love a good Pigs in Space costume. Possibly because there’s so much costuminess that goes into them.  The logos, the shiny fabric, the 1950s sci-fi elements, and of course, the fact that they’re pigs.  In space.  Pigs in Space. 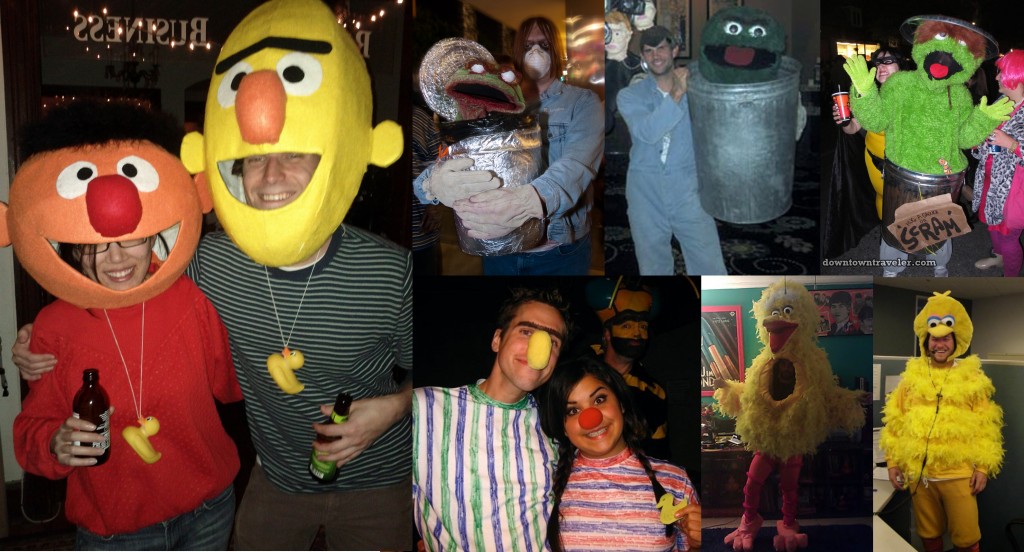 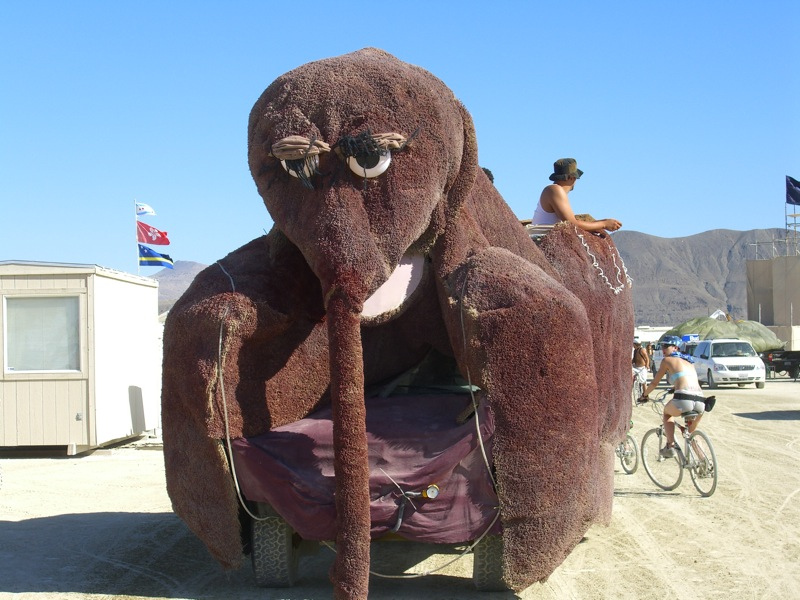 Okay, this probably wasn’t done for Halloween, but who cares?  It’s a pickup truck pimped out like Mr. Snuffleupagus!  Why wouldn’t you drive this everywhere??? 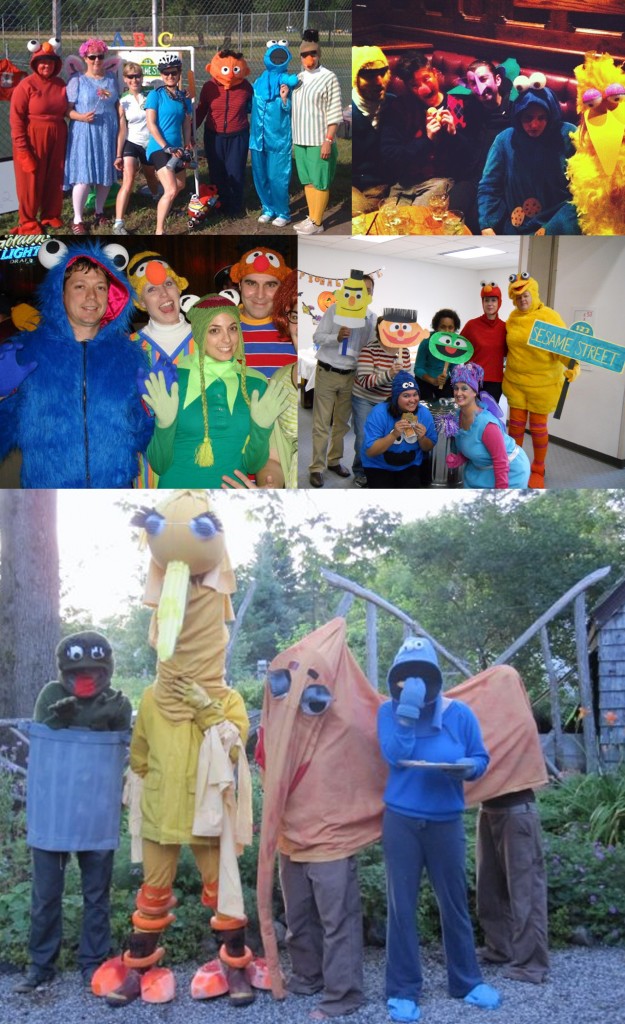 Here’s a batch of groups dressed as Sesame Street characters.  The costumes range from the impressive to the cheap to the inventive to the bizarre.  Of course, I’ll always take the bizarre over anything else.  That Snuffy in the bottom picture might be my favorite costume from the history of costumes.  He looks like he’s melting! 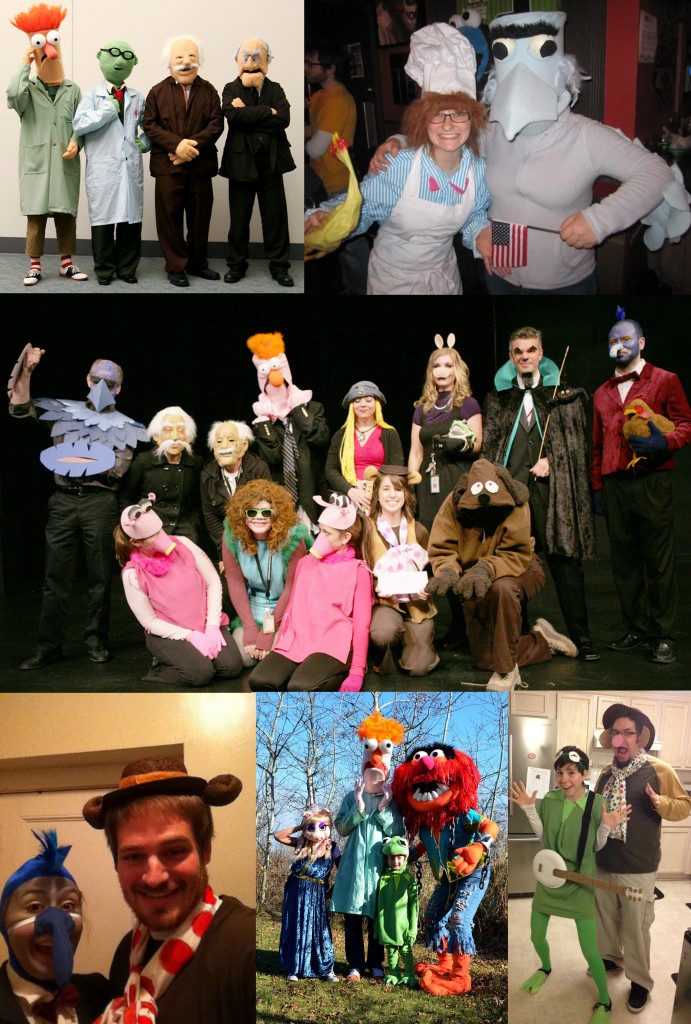 Here’s a few groups of Muppet Show fans!  Highlights: Sam the Eagle’s giant head, the simplest (yet most effective) Janice costume ever, Rowlf made from a hoodie, Fozzie’s porkpie hat-and-ears, the coolest Animal and Beaker parents of a Kermit and Piggy, and Kermit and Fozzie’s jazz hands.  All of the people above have some amazing friends. 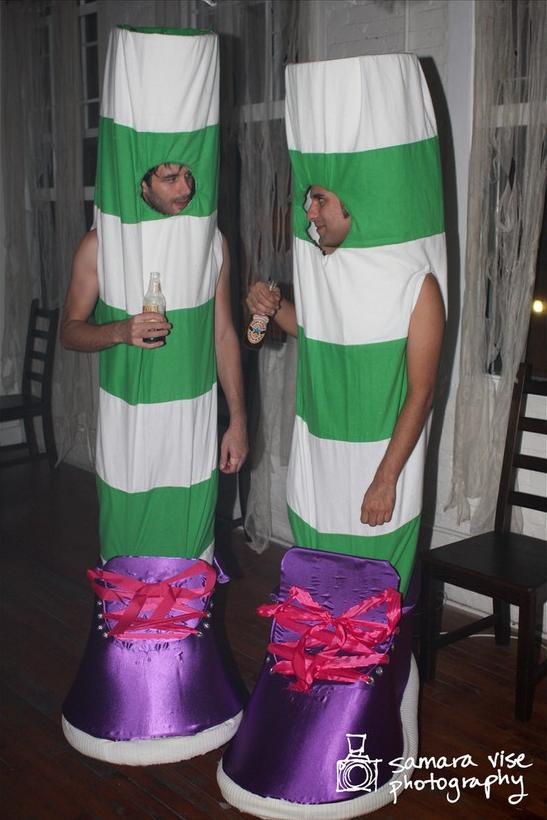 And here’s the winner of the bunch!  The most brilliant Muppet costume I’ve ever seen in my long history of amassing these Halloween Parade entries.  Yes, these two gentlemen are dressed as Nanny from Muppet Babies.  Or more accurately, they’re Nanny’s shoes and stockings.  (Though as far as we know, that’s all that exists of Nanny.)  The genius of this costume just absolutely floors me.

A thousand thank-yous to everyone who sent their pictures to us for this year’s Halloween Parade!  And thanks to everyone who made and wore all of these fantastic Muppet costumes!  All of you (yes, you!) are the true stars of Halloween.

Click here to pimp your Snuffle ride on the ToughPigs forum!