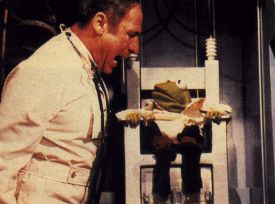 Kermit sacrifices himself to Doc Hopper, giving himself up in exchange for Miss Piggy. Hopper takes Kermit to a deserted barn, and ties him up with Piggy. He gives Kermit one more chance — “will you be the national spokesman for Doc Hopper’s French Fried Frog Legs?” — and when Kermit refuses, he calls in the Professor.

Hopper
Tell us what you’re going to do to our little Kermit.

[ He intends the electronic gear at the back. A couple of Goons wheel it forward. It is a mean-looking machine. ]

Hopper
What does it do?

Krassman
It completely fries the mind. (laughter) Just strap the frog in, clamp on the electrodes, and throw the switch! After that, he’ll obey your every command. He’ll do your commercials — sell your frog legs — anything!

Krassman
Turns the brain to guacamole!

[ Doc and Krassman are hysterical with laughter. They take a moment to compose themselves. ]

Hopper
Oh, Krassman, you got a fun job!

Krassman
Yes, it is rewarding.

Hopper
Ah well, Max and I will let you get on with your job then.

Piggy
(whisper) Kermit, whatever you’re planning, shouldn’t you do it soon?

Kermit
I could. But will bursting into tears help?

Hopper
(standing in doorway) I’ll be back later to pick up what’s left of the frog.

[ Doc and Max exit. Krassman straps Kermit into the machine, humming happily as he does so. He then turns Piggy around so she can see Kermit. ]

Kermit
Why should I?

Krassman
Because your brain is about to go bye-bye. After I throw this switch, you won’t know her from smoked ham hocks.

Piggy
That does it.

Piggy snaps the ropes, and leaps into a vicious karate battle. She makes short work of the goons and Professor Krassman, and smashes the machine. Kermit and Piggy are free to go… but then Piggy gets a phone call from her agent, and runs out, leaving Kermit alone.

Then the image on the screen jerks and slows, and we see the film jam and melt in the projector…

[ Lit only by the projection lamp, still reflected off the screen until house lights come up in the room. Kermit turns to see what’s happening. The Swedish Chef appears in the projection window. He is swathed in miles of loose, tangled film. He babbles angrily in mock Swedish. ]

Piggy
That is not the way it happened.

Kermit
It was too.

Kermit
You said it was your aunt.

Kermit
You always said it was your aunt who was sick.

[ Piggy pauses for a moment. ]

Piggy
She caught it too. The whole family came down with it. There was an epidemic that year!

Fozzie
Hey, Kermit — you cut my joke about the electricians and the polar bear!

Scooter
You think you’ve got problems. How have you liked my scenes so far?

Fozzie
You haven’t had any scenes so far.

Scooter
I rest my case.

Floyd
Yeah, Animal is kind of irritated, too.

Kermit
Don’t worry. Your scenes are all coming up!

Floyd
Hear that? Now just be quiet and eat another seat cushion.

[ Animal takes a large bite out of seat in front of him. ]

Robin
I don’t care what everybody else says. I’m having a great time.

Kermit
Thank you. Excuse me a second.

Kermit
I’m sorry, Henry. You aren’t in this part of the movie either.

[ Henry gets up wearily and walks up the aisle, muttering in German. He passes Statler and Waldorf. ]

Statler
So far you’re the best part of the movie!

[ Projection window: Swedish Chef babbles something loudly in Swedish and flashes the thumbs up sign. ]

Here’s another cameo role that’s much more fleshed out on screen than it is in the script. On the page, Professor Krassman is a bit dull, but as performed by the incomparable Mel Brooks, he’s a German lunatic who alternately screams at Hopper and fondles his machine.

In the last section, I suggested that Steve Martin may have hammed up — I mean, beefed up his part — and I think the same may be true for Brooks. If you look closely, there’s a couple places where you can see Charles Durning (as Doc Hopper) choking back laughter as he watches Brooks go wild — watch Durning’s expression during the “hold on to your hat” sequence, and the shot where Brooks kisses and licks the machine while chanting “cerebrectomy.” Durning pretty much stays on script — “Zaparoonie” and “Oh, Krassman, you got a fun job” are there — but Brooks takes his small part and adds six gags and a weird facial expression for the price of one. Say what you like about Mel Brooks, the man gives value for money.

The broken-film intermission is another scene that’s structurally the same as in the film, but with completely different dialogue. The bit about Piggy’s family being sick is funny, although it might have been cut because it doesn’t make a lot of sense — Piggy has obviously filmed the scene that she’s complaining about.

Scooter and Animal’s first appearance has moved up to the Mayhem scene, so those bits were cut — although Animal still shouts “IRRITATED! IRRITATED!” despite the fact that it’s out of context and doesn’t really make much sense. (In fact, until I saw the script, I could never figure out what Animal was shouting in this scene.) The Chef’s classic line, “Der flim is okey-dokey!” is also not in the script and may have been ad-libbed by Henson.

In the script, this scene also has another appearance from Henry Kissinger — and would you believe that this isn’t the last Kissinger cameo? Roll film…

Next in the Anthology: Doc Hopper drops the bomb! Chapter 10: Counting Down

The Road to Hollywood, Chapter 2

The Road to Hollywood, Chapter 3

The Road to Hollywood, Chapter 11

The Road to Hollywood, Chapter 12