The Road to Hollywood, Chapter 6

Having shaken Doc Hopper, Kermit and Fozzie pull up to an abandoned church courtyard and take a catnap. They’re awoken by the thunderously loud rock music blasting from the church.

When the frog and bear enter the church, they find Dr. Teeth and the Electric Mayhem — Dr. Teeth on keyboards, Floyd on bass, Zoot on sax, Janice painting in the balcony… and a cameo guest star on drums. The drummer introduces himself: “Charlie, the drummer. But I’m thinking of going into real estate.”

Rather than bore the audience with the story so far, the band reads the screenplay. They decide to help by painting Fozzie’s Studebaker with “the most ornate psychedelic patterns imaginable.” Kermit and Fozzie leave their new friends and head back out on the road.

Meanwhile, Max is driving Doc Hopper’s limo, keeping his eyes peeled for a frog and a bear. Hopper is in the back, having breakfast: “There is a small table in front of him, with linen tablecloth, on which sits a breakfast of pancakes and a pot of coffee.” Max spots the rainbow colored Studebaker, and immediately gives chase, but Fozzie swerves up against a billboard that matches the car’s design exactly, making it virtually invisible. Hopper’s limo drives right by. The glove compartment in Fozzie’s car pops open, revealing Kermit’s nephew Robin, who chirps, “I just want you to know this is one of my favorite parts of the movie. What a twist!”

Hopper realizes that Kermit must be hiding; he orders Max to turn around and look for them. Max tries (and fails) to do a U-turn, skidding the car into a ditch and causing Hopper to spill syrup all over himself. Hopper grabs a box of tissues and tries to blot the syrup off himself, the wadded tissues just get stuck to him. Max tries to move the car, and Hopper climbs out, totally covered in white tissue. 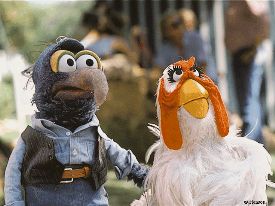 And who should be driving down the road but Gonzo the Great, Plumbing Artiste, with his chicken girlfriend, Camilla. He sweet talks her: “Camilla, honey, nothing is too good for you. I mean, you are a beautiful chicken. And I know chickens. There, for instance, is a really ugly chicken.” Gonzo points at Hopper, “looking like some grotesque chicken,” jumping up and down and screaming for Gonzo to help. Gonzo drives by, distracted by the big ugly chicken in the road — and by the time he turns back to the road, he’s on a collision course with Kermit and Fozzie’s car…

If you’ve been reading all of this so far, you’ve probably noticed that there were a lot of extra Hopper-chasing-Kermit scenes that ended up cut from the movie. In the movie, they were content just to show Hopper drive by the psychedelic billboard and off screen, but the script goes into much more detail, accounting for every one of Hopper’s delays and setbacks. So we get Hopper’s car slipping on a banana peel, running into a subtitle, and now this whole pancakes thing. And there’s more to come — just wait till you see what happens after Hopper’s car gets hit by a giant pie.

Anyway, I don’t think they could have shot this sequence even if they’d wanted to… Hopper’s limo in the movie is bigger than a normal car, but it doesn’t really look big enough to fit a breakfast table. So, rather than having Gonzo’s accident caused by the distraction of a giant chicken, it happens because he’s just a really bad driver. Which works just as well, really.

One thing that wouldn’t have worked as well is Charlie the Drummer, an idea that sounds cute on paper but means that Animal doesn’t make an on-screen appearance until page 79. That’s far too late to establish Animal, considering that he plays a pivotal role in the showdown climax. We’ll get to the introduction of Animal and Scooter later… much later.

Next in the Anthology: “I don’t believe it… He’s found us already!” There’s yet another Hopper chase scene, and the Muppets find themselves in the path of a moo-ving train… Chapter 7: Another Hopper Chase