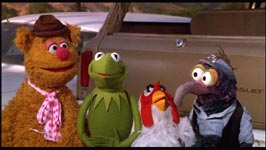 Crash! Kermit and Fozzie’s car collides with Gonzo’s truck. Gonzo and Camilla make themselves at home, and decide to come along for the ride to Hollywood. Their vehicle limps into a used car lot run by Mad Man Mooney (a cameo guest star), with the assistance of Sweetums, his jack. Sweetums explains: “Jack not name, Jack job!”

Mooney gives the frog his sales pitch, boasting that there’s no wheeling and dealing on his lot — the price on the sticker is the price you pay. Sweetums leans down and dabs his finger in a puddle of oil, then adds a decimal point on the tag of a nice looking station wagon. When Kermit spots it, Sweetums is standing nearby, “innocently wiping his index finger in his fur.” The station wagon has been “marked down” from $1195 to $11.95, and Kermit promptly buys it. He invites Sweetums to come along to Hollywood. Sweetums turns and runs to the garage to get his bag, but Kermit thinks he’s just run off, and leaves without him.

The Muppets are on the road again — and guess what? Doc Hopper is still hot on their trail. Kermit spots Hopper’s limo just behind them. There’s a freight train crossing the road right in front of them, so Kermit yells for Fozzie to drive up onto a loading platform and right onto one of the speeding train’s flatcars. Max and Hopper try the same trick, but they miss the train, and they end up stranded on the tracks. As the train speeds away, a cameo guest star can be seen standing on the caboose platform: “I wanted to be in the movie, but they wouldn’t let me sing a song. So I just came along for the ride.”

Kermit, Fozzie, Gonzo and Camilla make themselves at home on the flatcar, watching the sun set. The next morning, a Cowboy — another cameo guest star — brands cattle as he moves them off the freight train. Fozzie drives the station wagon down the ramp, and the cowboy brands the car: “Fatten her up some, and that little Ford will make mighty fine eating.”

Fozzie and Kermit take a moment to rehearse their act, entertaining some cows:

Fozzie
But lemme tell you, we just love working for cows. You’re an udder delight! You don’t know the hoof of it. You’re a great bunch of cows.

Fozzie
Heard of what?

Kermit
I mean, the cow’s herd.

Fozzie
I don’t care if the cows heard, I haven’t said anything to be ashamed of!

And, with that recycled shtick, Kermit heads to the county fair… and his romantic destiny.

Another scene, another Hopper chase… Obviously, all of this train malarkey was cut from the film, which is just as well, since it’s a toss-up whether they could have pulled off that driving onto a moving train scene. In the movie, we last see Hopper as he drives past the psychedelic billboard, and we don’t see him again until after the fair sequence.

The cow shtick is an old Abbott and Costello routine, and it’s in the script as a tip of the hat to Henson and Oz’s early camera test. That being said, I think branding the car is funny, and it’s a shame they lost that gag. That’s my nomination for the funniest joke in the script that never made it to the screen.

The used car lot scene is basically shot as written, with one major exception. In the script, the stray decimal point on the station wagon’s price tag is an accident; Sweetums squashes a fly against the price tag. In the script, Sweetums deliberately adds the decimal point, presumably as his revenge against his oppressive boss. That’s another bit that I wish they’d kept; the image of Sweetums slyly wiping his finger on his fur adds a new dimension to the scene.

Next in the Anthology: It’s time for some return appearances… by Robin, Statler and Waldorf, and Henry Kissinger! Chapter 8: All’s War in Love and Fairs