The Road to Hollywood, Chapter 4

Lost and on foot, Kermit approaches the El Sleezo Cafe. “The El Sleezo is slightly out of context with the town we have seen outside. It is really sleazy, with beaded curtains, slowly revolving overhead fans, and the subtle aura of a place that might be managed by Sidney Greenstreet. It is filled with people, including some sailors, some spies, some cowboys, some mafia hitmen, some Arabs, some Orientals — a mixture from all tough-guy bars everywhere.”

Kermit enters, and winces as he sees a waiter dishing out plates of frog’s legs. He goes to the bar, where Henry Kissinger is nursing a beer: “And then the little frog said I wasn’t supposed to be in the movie. I wasn’t cast, he said. I just couldn’t believe it. I paid for the sheriff suit myself.”

Kermit shrugs and moves down the bar, where a seductive woman asks him to buy her a drink. A Tough Guy accuses Kermit of making a pass at his girl, and “clouts Kermit on the top of his skull, squishing his head down into his body.” The Tough Guy starts Bar Fight #1, and there’s a montage of images — Kermit squished into a stein of beer, getting flung into the air and spinning around on a ceiling fan, smacking into the piano. This wakes up the Piano Player, who plays the intro for the El Sleezo show…

Fozzie
Hiya, hiya, hiya! This your favorite Fozzie Bear! And I’m gonna tell jokes old and rare! Did you hear the one about the one-eyed lumberjack?

Lumber-jack
Yeah, I heard it. You bet I heard it!

Fozzie
Well… then… you know what a lousy joke it is. Moving right along, there was a sailor that was so fat…

Sailor
How fat was he?

[ He smashes a beer bottle against bar. ]

Fozzie
(beginning to sweat) He… he was so fat that everyone liked him and there was nothing funny about him at all.

Kermit
I think the poor guy’s in trouble.

Fozzie
Come on, people. Have a heart.

[ Statler and Waldorf are seated at a table in the rear of the room, looking as they always do. ]

Statler
We’ve got a heart.

Waldorf
What we want is a joke!

Fozzie
I got it! I got it! No problem. Did you hear the one about the really dumb midget with long green hair and ears like a donkey?

[ Shot of a green-haired, donkey-eared midget ]

Fozzie
This just isn’t my night…

The crowd gets even uglier, so Kermit jumps up on stage and helps Fozzie out. The frog and the bear do a snappy two-step, but the crowd doesn’t like it. But their act does have an appreciative audience — Doc Hopper, who’s watching through the back window.

Doc
A meritorious achievement, Max. He is one perfect frog.

Doc
(continuing, sweetly) You should have found him months ago.

The crowd completely loses patience with Kermit and Fozzie’s dance act, and they start Bar Fight #2 — but the unruly patrons only fight each other, and they leave the frog and the bear alone. Kermit and Fozzie walk through the crowd, untouched, and Kermit invites Fozzie to join him on his trip to Hollywood. Fozzie agrees, and they head outside to Fozzie’s car. 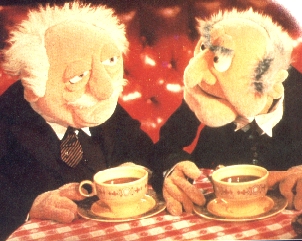 It was a big practical joke on the children of 1979, apparently. There it is, in The Muppet Movie Book — a picture of Statler and Waldorf drinking coffee at the El Sleezo. Millions of children around the world created false memories of actually seeing them in the movie… and remember, this was before VCR’s, so the only real record of what you saw and didn’t see in the movie was that book…

Anyway, it ain’t there. It’s in the script — and, apparently, they even shot the scene — but the old boys were left on the cutting room floor. The same thing happened again, five years later, in the Muppets Take Manhattan book. There’s a picture there of Statler and Waldorf backstage in Kermit’s dressing room when they’re trying to snap him out of his amnesia, and that’s not in the movie either. Apparently Statler and Waldorf wasted years of their lives appearing in little scenes that never made the final cut. By the way, am I being too much of a fangeek about all this? This would be a horrible time to realize that if it were true. Ah, well, there’s no turning back now.

The other big change from the script to the movie is that the script has two separate bar fights — one with the Tough Guy beating up Kermit, and then a second one at the end of Fozzie’s act. The sequence in the movie is a lot tighter. One climactic fight is more exciting than two, and the second bar fight in the script is pretty dull — everyone brawls as Kermit and Fozzie just walk out without a scratch.

The thing that I find the most interesting about this sequence in the script is that weird sadistic moment with Doc Hopper. It’s creepy, isn’t it? The thing that’s creepiest, obviously, is the idea of Hopper — in his first two seconds on screen — sweetly chirping as he injures Max. Now that right there is a villain. The shot in the movie is much more subdued; there’s no dialogue, and Hopper just grins excitedly. Aw, don’t worry. There’s plenty of time for sadism; we’ve got a whole movie for that!

Next in the Anthology: What do you get when you cross a latex tree with a giraffe? Kermit and Fozzie practice their comedy act as they move right along… Chapter 5: Movin’ Right Along