The Road to Hollywood, Chapter 12

The Muppets have made it to Hollywood, and we see a montage of the Electric Mayhem bus driving through town.

“As the bus passes by a number of the town’s more famous landmarks, images freeze frame and become fragments of a garish photo-montage postcard. The last image which completes the postcard is the movie studio which we saw in scene one of the film.”

They arrive at the “very plush, very elegant, art deco office” of studio exec Lew Lord. Unfortunately, to get to Lord, the Muppets have to get through his receptionist first…

Receptionist
Oh dear me. And is that a pig with you… and a dog and a bear?

Kermit
Well, but you see I’m here for the frog auditions.

Receptionist
(sneezing) Am I starting to break out?

Kermit
Listen, I read the ad. “Lew Lord announces auditions for talented frogs wishing to be rich and famous.” I just brought some friends along.

Receptionist
We cancelled the auditions. Where’s my Kleenex…?

Receptionist
(sneezing) In checking around we realized that there aren’t any talented frogs. So Mr Lord dropped thr project.

Kermit
Oh no he didn’t.

[ Kermit turns and marches to Lew Lord’s door. The Muppets follow. The Receptionist is using eye drops and nose spray. ]

The Muppets enter Lord’s magnificent office, where they find the intimidating Lord sitting behind a massive desk. “There is an open window in the wall next to his desk. Through the window arches a rainbow, which meets the floor just by the side of the desk. In the rainbow sits a pot overflowing with gold.”

Kermit approaches: “Please, sir, I’m Kermit the Frog. We’ve… we’ve come to be rich and famous!” Lord studies the cowering Muppets for a moment, then buzzes the receptionist to prepare “the standard rich and famous contract” for Kermit and company. Then he gestures casually at the pot of gold, saying, “Oh… help yourself.”

The camera moves in to the pot of gold, which turns into the first shot of the final production number: “A joyful sparkling song about the wonders of show business. It touches on the “Rich and Famous” aspect, but also emphasizes the joys of performing, the fun of making people laugh. The number itself is very large. It is Busby Berkeley with puppets — thousands of puppets, or so it appears.

“The final shot of the film is a huge pullback in a tremendously large set, which continues to pull back from Hollywood, the US, Earth and back into space. As THE END comes up, we pull back to the screening room.”

Then Sweetums crashes through the screen, shouting, “Y’know, I just knew I’d catch up with you guys!” The Muppets all laugh and applaud.

EXT. MOVIE STUDIO — SUNSET. “Various shots of the Muppets congratulating each other and climbing into their cars. Over this we superimpose end credits and underscoring. The Muppets drive through the gate, waving to the Guard. Kermit is the last to pass on his bicycle. As the credits, the camera moves up and in on the “World Film Industries” sign, which was the first image of this film. But now instead of the Art Deco statue of a director holding a globe of the world, Kermit the Frog holds the globe and grins to camera.”

FADE OUT. THE END.

Well, then Paul Williams goes and writes the songs, so that’s one thing. And there’s a bunch of minor differences in the Receptionist scene, which is a little more fleshed out.

But the main difference in this last section, as in the first part of the film, is that they’re obviously still wrestling with Kermit’s motivation. Is he interested in becoming “rich and famous” because he wants the money, or because he wants the opportunity to entertain people and make them happy?

Telling a story about making movies without mentioning money is kind of like telling a story about the Civil War without mentioning slavery; you could do it, but you’re missing something pretty important. So, to some degree, the “rich and famous” bit has to be there, or Hollywood would look like a big open-mic poetry night. But, at the same time, they don’t want to make the Muppets look greedy. So in the film, Kermit does say “we want to be rich and famous,” and Lord has the receptionist draw up “the standard rich and famous contract.” But they must have decided that the pot of gold takes things a bit too far.

I love this sentence in the description of what the final song should be like: “It touches on the ‘Rich and Famous’ aspect, but also emphasizes the joys of performing, the fun of making people laugh.” It’s like Juhl and Burns are struggling, even on the very last page, with the question of how much to acknowledge money and fame.

Ultimately, the “singing and dancing and making people happy” wins out, which brings us back to the beginning of the film again… 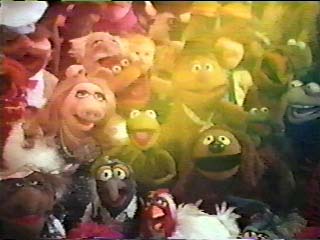 So, while we’re here, I’d like to suggest that if you haven’t watched The Muppet Movie for a while, go take another look at it. When I started this Anthology, I thought maybe it would make me sick of the movie, like looking at it in this much detail would ruin the illusion for me. But, to my surprise, I like the movie even more now. There’s lots of bits that I never really thought much about — the rhythm of the El Sleezo scene building to the bar fight, the manic vaudeville glee of throwing a huge custard pie at Hopper’s car, watching Charles Durning’s face as Mel Brooks almost literally chews the scenery…

A really, really great movie just gets better the closer you look at it. As a wise man once said, der flim is okey-dokey.