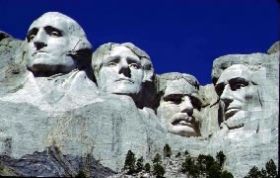 The film starts again… and we see that Fozzie is singing “America the Beautiful” as the other Muppets sit around waiting for him, bored. When Fozzie is done, he thanks everyone for waiting: “The patriotic urge is very strong in American bears.”

The station wagon pulls out of the parking lot, and we see the stone heads on Mount Rushmore, “but not the real ones — exact scale models, carved from a single block of foam rubber, and an exact match of the real thing.”

Jefferson
I say we put it to a vote.

Roosevelt
Bully. Just bully. A vote is the democratic way.

Washington
Very well then. All those in favor, signify by saying “aye.”

Jefferson
The “ayes” have it.

Lincoln
It’s decided then. If you can’t be in the movie, you can stay up here with us, Henry.

[ Camera pulls back to see Henry Kissinger, carved in stone next to the other Mount Rushmore figures. ]

Kissinger
Thank you. Thank you from the bottom of my heart.

The Muppets drive through the desert, and stop at a gas station…

[ All the Muppets are present except Fozzie. They are very bored. Knitting, nail file, dozing, etc. Camera pans past two doors marked MEN and WOMEN, comes to a third door marked BEARS. Fozzie comes out of the door and runs toward station wagon. ]

[ Fozzie climbs into the driver’s seat. ]

Fozzie
Give me a break, guys. There aren’t that many gas stations with bear’s rooms.

Scooter
Sorry I took so long. Can I get you some gas?

Kermit
Actually, we just stopped to use the facilities.

Scooter
That’s okay. Are you guys by any chance going to Hollywood to be rich and famous?

Kermit
Well, yeah as a matter of fact.

Scooter
Can me and my dog come too?

[ Animal appears next to Scooter. ]

Kermit
Oh, why not. Climb in.

[ Scooter and Animal climb into the back seat. ]

Fozzie
How come you want to go to Hollywood?

Scooter
It’s the only way we could get into the movie.

The Muppets drive on through the desert, and they come across Miss Piggy, hitch-hiking. Piggy gets in the car, gushing: “What colossal luck. What an unbelievable coincidence!” Robin enters right behind her, saying, “Great things like that have been happening to the Muppets all through the movie.” Kermit sniffs, “Well, Miss Piggy. I’m surprised to see you out here where there aren’t any telephones.” He flips on the radio, and suddenly hears Doc Hopper’s voice, warning him to give up or become “green hamburger.”

In Hopper’s limo, “Doc is huddled over a radar screen in the passenger compartment. On the screen we see the tiny image of a frog. Every time the screen makes a complete scan, instead of the traditional blip we hear a little RABBIT.”

Hopper
This is your last warning, Frog. Stop your vehicle!

Max
Are they stopping, Doc?

Hopper
No. Stand by to initiate countdown… now!

[ Max has his finger on a red button on the dashboard, marked BOMB BUTTON. ]

[ The highway is seen in the distance crossing the scene like a ribbon. There is a large X painted on the highway. The station wagon is approaching the X. ]

[ Cut to: Wide shot of highway. Explosion occurs right on the X… but just before station wagon reaches it. Station wagon swerves wildly and avoids explosion. ]

Max
I’m a chauffeur. Where is it written I can count backwards?

But the Muppets’ luck is running out… the station wagons starts to sputter, backfires and finally wheezes to a halt. The Muppets set up a little campfire and hope that someone comes by as the sun sets. Gonzo starts to play a mournful tune on the harmonica. “Scooter joins in, singing a sad poignant little song. He and Gonzo do it as a duet, singing and playing. The others listen silently, staring at the fire.”

Kermit gets up and walks away from the campfire, berating himself for messing it all up. He’s joined by another Kermit, who walks alongside him.

Kermit
I dragged ’em all out here. Away from their homes and their lives.

Other K
They wanted to come.

Kermit
That’s because they believed in me.

Other K
They believed in the dream.

Kermit
There’s no chance for the dream now.

Kermit
What good is hope?

Other K
It’s no good at all, until it’s all you got left. Then it’s something.

Kermit
You know, I was wrong. When I said I never promised anyone.

Other K
Who did you promise?

Kermit
I promised me.

Kermit walks back to the campfire, where he finds the Electric Mayhem singing and playing music. “Around the campfire sit, in addition to the Muppets we last saw there, Floyd, Dr Teeth, Janice and Zoot, and now Animal’s playing the drums. MUSIC: FLOYD’S REUNION SONG. It’s a very bright, happy song — perhaps a song that, out of this context, would appear to be about lovers that broke up and are now reuniting, but has another obvious meaning in this context. Floyd does the solos with everyone joining in with harmony and handclapping.”

Floyd
At the moment, we are about to modulate!

[ And they do, continuing the song to its joyous conclusion. The Muppets all applaud themselves. ]

The band explains that they found Kermit by following the screenplay. Floyd says that Kermit did them a favor, too: “This Animal dude has agreed to be our new drummer!” The auditions are tomorrow at two o’clock, so they all pile onto the band’s bus: “We’ll have breakfast at Hollywood and Vine!”

This whole section was tightened up in the film, cutting Mount Rushmore (and the Kissinger cameo), Fozzie going to the bears’ room, Scooter and Animal at the gas station, Robin’s appearance, Floyd’s song… In fact, they might as well have taken to this section with a pair of garden shears.

The bomb sequence is the most obvious cut, and it’s replaced in the film with Hopper training his goons and introducing them to Snake Walker, the expert frog-killer. Introducing Snake raises the stakes for Kermit, and the bomb sequence wouldn’t have worked with the new and improved sympathetic Max anyway. By this point in the film, there’s no way that the “nice” Max would press the button to drop a bomb on Kermit’s car.

We’re pretty lucky to have lost the Scooter and Animal gas station scene, where the “how the Muppets met” conceit is starting to wear thin. (At the point where even the characters themselves are starting to admit that they’re only being introduced for the sake of it, you gotta call time on the whole concept.) But it’s a shame that we lost Floyd’s “Reunion Song”; from the description, it sounds like it would have been interesting. It probably would have slowed things down, though, so in the film it’s replaced by a funky instrumental reprise of “Can You Picture That.”

Kermit’s pivotal dialogue with himself is also tightened up a bit in the film. Here’s the scene as it was shot:

Kermit
I brought ’em out here in the middle of nowhere. It’s all my fault.

Other K
Still, whether you promised them something or not, you’ve got to remember… they wanted to come.

Kermit
But… that’s because they believed in me.

Other K
No. They believed in the dream.

Other K
You do?

Kermit
Yeah. Of course I do.

Other K
Well, then…

Kermit
Well, then… I guess I was wrong when I said I never promised anyone. I promised me.

[ Kermit looks up , and a shooting star flashes across the sky. ]

And that, kids, is all you need to do to turn a Very Good Scene into a Perfect Scene.

Next in the Anthology: It’s time for a showdown! Kermit and the gang confront Doc Hopper… Chapter 11: The other “I have a dream” speech

The Road to Hollywood, Chapter 6