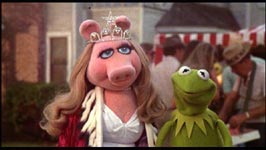 The Muppets stop off at the Custer County Fair, where they catch the end of the beauty pageant. The emcee inroduces the pageant’s judges, Edgar Bergen and Charlie McCarthy, who warn, “You’re not going to believe who the winner is, folks.”

The winner, of course, is Miss Piggy, who spots Kermit in the crowd and sings a love song to him, accompanied by a romantic fantasy montage. The next thing we know, Piggy’s attaching to Kermit, who mentions that he’s headed west. He invites her along for ice cream — but Piggy thinks he’s inviting her to travel with them, and she rushes off excitedly. Gonzo is talked into buying a whole bunch of balloons — and soon, he’s airborne. Kermit, Fozzie, Piggy and Camilla jump back into the car and chase after Gonzo.

It’s been about seven pages since we’ve seen Doc Hopper, so here he is again. Hopper and Max’s limo is joined by a pickup truck with “four goons in bib overalls, each carrying a shotgun.” Hopper is in the back of his limo, lathering his face for a shave. Fozzie tries to follow Kermit’s directions, gets distracted and runs into a billboard advertising Aunt Amy’s Custard Pies; the custard pie flies off the billboard and smacks into Hopper’s car. The goons are all thrown forward; they fire their shotguns. The bullets hit Gonzo’s balloons, and “by sheer luck, Gonzo falls exactly on top of the station wagon roof.”

[ Gonzo appears upside down, peering into the windshield. ]

Piggy
I don’t understand any of this.

[ Robin appears upside down in windshield next to Gonzo. ]

Robin
Yes, but isn’t it terrific!

But is that enough to shake off Hopper for a while? Not in the script, it isn’t. Hopper and the goons are still chasing after the Muppets, with their windshield wipers cleaning off the custard pie. Kermit doesn’t know what to do — but then he spots a seltzer factory. “On the lawn in front of the factory sits a giant seltzer bottle on a pedestal. Kermit and Fozzie look at each other. Kermit nods.” Fozzie drives behind the bottle, and the Muppets hide behind the pedestal as Hopper drives up. “Seltzer bottle squirts Limo with a force like a giant firehose. Limo spins around twice and lands in a ditch.” Inside the limo, “Doc sits unharmed, straight razor in hand. But the upholstery and ceiling of the passenger compartment hang in shreds and tatters.”

Miss Piggy wants a “quiet little dinner,” so the Muppets stop off for the night. Kermit and Piggy end up at a Terrace Restaurant: “The place is very rustic, with split-log railings and tables over a lake. Just next to the terrace a water wheel turns. It is nice enough that one can just imagine having a romantic dinner for two there — but not one bit nicer.” As Kermit enters, he spots an old friend:

Henry
Can I get you a glass of water? Or some breadsticks?

Kermit
Please, Mr. Kissinger, we don’t need a busboy in this scene. Thanks anyway.

Henry
But it’s a lifetime dream. I really want a part in a movie.

Piggy enters, and Kermit treats her to a bottle of wine. A waiter (cameo guest star) pours the wine for them, assuring them, “It’s considered one of the best wines of the world for 95 cents.” Kermit starts to pour his heart out to Miss Piggy, but they’re interrupted when the waiter announces that Piggy has a phone call. She excuses herself… and never comes back. Dejected, Kermit leaves a dollar bill on the table and tells the waiter to keep the change. “Why is it always true?” the waiter grumbles. “Frogs are lousy tippers.”

Kermit heads for the bear, and meets Rowlf the Dog, who commiserates with the frog’s romantic troubles. They sing “a sad/funny little duet based on the old ‘can’t live with ’em, can’t live without ’em’ theme, designed to allow for some good harmony howling from Rowlf.” At the end of the song, we see Statler and Waldorf sitting at a corner table.

Waldorf
What’d you think of the song?

Statler
It’s not often you see a frog and a dog singing a turkey.

A waitress (another cameo guest star) announces that Kermit has a phone call — and when he answers, he finds out that Doc Hopper has pignapped his date and is holding her hostage…

As you’ve come to expect, the Doc Hopper material is about twice as long in the script as it is on screen. There’s no pickup truck of goons in the film, and no shaving gag. The custard pie hits Hopper’s car, and they’re out of commission for a while, with no need for the seltzer factory sequence.

Lots of the changes in this section have to do with guest star cameos. Edgar Bergen and Charlie McCarthy appear in the script, the only guest stars named in the script who actually appear on screen. The Master of Ceremonies and Balloon Seller appear in the script — they’re played by Elliott Gould and Richard Pryor in the film — but Bob Hope’s ice cream salesman doesn’t appear.

Henry Kissinger makes another appearance in the restaurant. He’s not in the movie, obviously, but they make up for that with a much lengthier scene with the Waiter.

In the script, the Waiter gets exactly three lines — the two quoted above and a “telephone call for Miss Piggy.” In the film, Steve Martin turns this tiny part into one of the most elaborate and memorable cameos in the movie, taking more than a minute and a half of screen time, and even turning the little throwaway “phone call for Kermit the Frog!” lines into tiny comic gems.

Oh, and is it too fangeeky for me to point out that in the movie, the name of the country fair is changed from Custer County to Bogen County? Yeah, maybe it is. Forget I mentioned it.

Next in the Anthology: The film breaks, and everyone complains. Chapter 9: Swine Fever