The Road to Hollywood, Chapter 11 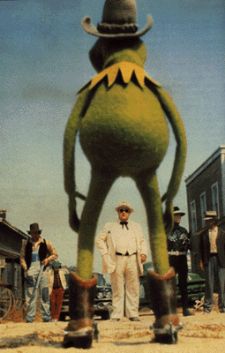 Back on the road, the Muppets are on the bus and Hollywood bound. Miss Piggy wants to cuddle with Kermit and whisper sweet nothings, but then Kermit spots Doc Hopper’s limo right behind them.

“Chase music, guys,” Dr Teeth announces, but Kermit says no: “No more chase! We’ve got to stop running. That’s no way for anyone to live. We owe that to ourselves.” There’s a ghost town up ahead — “It’s time for the showdown.”

The bus pulls in to the ghost town. Kermit gets off to check things out; Floyd follows with Animal, who needs some exercise. As Kermit approaches an old storefront, “suddenly the rain barrel bursts to life. It is covered in multi-colored lights. It revolves, and it plays “Lady of Spain” like a music box.” Bunsen Honeydew and Beaker appear at the door, and Bunsen explains to the perplexed frog that “it’s one of my latest inventions — a musical, light-up rain barrel.” Kermit asks, “Why would anyone want such a thing?” “Such an odd question,” Bunsen replies.

Floyd and Animal enter the store, and Bunsen and Beaker introduce themselves. They live here in the ghost town, perfecting useful inventions — like the Insta-Grow pills, which they’ve used to make a four-foot prune. The prune shrivels to normal size before their eyes, and Bunsen explains, “That’s the trouble with these Insta-Grow pills. The effect is sadly temporary.” Floyd’s response: “Say, you’re wiggier than most, aren’t you, Honeydew?” Animal picks up the pack of Insta-Grow pills, curious.

Doc Hopper arrives, flanked by two large flatbed trucks of goons with shotguns. Hopper and Max get out of the limo, and the goons start to descend from their trucks.

Hopper
All right. What have you got in mind?

Hopper
What does that mean?

Kermit
I’ve never had anything in mind for you, Hopper. You’e the one who’s been chasing me for two thousand miles. I’m not doing anything but following a dream. I keep talking about getting rich and famous, but what I really want is just to entertain people and make them happy.

[ Doc looks down and toes the dusty street. ]

Kermit
I believe that’s a noble dream. And, even though you’ve been greedy and vicious, you are still a man with a heart and soul. Hopper, if you look to your heart, you’ll let me and my friends go on to Hollywood. And you’ll be a better man because of it, believe me.

Kermit
What do you say, Doc?

The Goons take aim at the Muppets, who stand there, terrified. Suddenly, there’s a low rumbling, and the ground seems to shake. “The roof of the building rips open and Animal’s head emerges, fifteen feet across. Then his shoulders. He looks around, sees Hopper and the Goons. Animal howls demonically. A green vapor comes from his huge mouth and descends over Hopper, who is shadowed by Animal’s size. Hopper turns and runs, screaming. Hopper, Max and Goons run terrified into the desert.

“The Muppets cheer wildly. Piggy throws her arms around Kermit…”

In the film, Max is given one more sympathetic moment, dressing as a motorcycle cop in order to pull the Muppets over and warn them that Hopper has hired a professional frog-killer. Kermit’s response is simple and eloquent: “Listen, guys. I can’t spend my whole life running away from a bully. It’s time for a showdown.”

The Bunsen and Beaker scene is shot pretty much as scripted, except that the “musical light-up rain barrel” has become an even more useless “musical rotating rain barrel,” and the prune doesn’t shrink.

More importantly, there are some added High Noon showdown elements in the film. Kermit enters Bunsen and Beaker’s workshop and spots a wall clock pointing to noon; when he confronts Hopper, the clock strikes twelve, and Kermit walks out into the street wearing a cowboy hat, and boots with spurs. None of that stuff is in the script, and it does make the scene suddenly more dramatic and less silly. (Or more silly, maybe, if you’re the kind of person who thinks a frog walking down the street wearing a cowboy hat and spurs is silly.)

Kermit’s climactic speech is much tighter and more emotional, and it acknowledges the basic humanity of both Max and Hopper. In the script, Kermit says, “Even though you’ve been greedy and vicious, you are still a man with a heart and soul.” In the movie, that becomes much gentler: “I don’t think you’re a bad man, Doc. But if you look in your heart, you’ll find you really want to let me and my friends go.”

Hopper
All right, frog. One last chance. Are you going to do my TV commercials live… or stuffed?

[ Snake and the Goons cock their shotguns. ]

Kermit
Hopper, what’s the matter with you? You’ve gotta be crazy chasing me halfway across the country. Why are you doing this to me?

Hopper
Cause all my life I wanted to own a thousand frog leg restaurants… and you’re the key, greenie.

Kermit
Yeah, well, I’ve got a dream too, but it’s about singing and dancing and making people happy. That’s the kind of dream that gets better the more people you share it with. And… well, I’ve found a whole bunch of friends who have the same dream. And that makes us like a family. You have anybody like that, Hopper? I mean, once you get all those restaurants, who are you going to share it with? Who are your friends, Doc? Those guys?

Hopper
I got lots of friends… Max, for instance.

Kermit
I don’t think you’re a bad man, Doc. But I think if you look in your heart, you’ll find you really want to let me and my friends go… to follow our dream. But, if that’s not the kind of man you are, and what I’m saying doesn’t make any sense to you… well, then, go ahead and kill me.

Oh, and Animal doesn’t shoot green vapor out of his mouth. What’s that supposed to be about?

Next in the Anthology: The Road to Hollywood concludes as Kermit and the gang find the pot of gold at the end of the rainbow! Chapter 12: Over the Rainbow