The Road to Hollywood, Chapter 3

Kermit hops on his bicycle — he’s made his decision, and he sets out on the road to Hollywood.

As he’s riding along, he passes a billboard advertising Doc Hopper’s French Fried Frog Legs. “A man is pasting up the billboard. Kermit doesn’t notice any of this, but the man notices him and runs off excitedly.”

Then a large farm truck runs Kermit into a ditch — destroying his bike. Kermit shakes his fist and screams, “Road hog!” Cut to the cab of the truck, driven by a Muppet pig. The pig does a take to the camera: “What’s he expect?”

Kermit continues on foot — and as the sun sets, he enters a small southern town. The script says, “Since we have established no exact time period for this movie and we are striving for a sense of timelessness, it might be well to have cars parked on the streets, circa late forties or early fifties. If that seems contradictory, at least we should establish a mood that does not represent the present.”

Kermit ends up at a gas station, where a pretty female gas station attendant says, “Boy, I’m sure happy to see a frog here.” She kisses him on the cheek, and she’s disappointed when nothing happens: “Darn. You’re the sixth frog I’ve kissed this month. You guys never turn into Prince Charming.” Suddenly, a man arrives on a white horse — it’s Prince Charming, “complete with white tights, blue tunic, and crown.” The Prince asks the attendant to “Fill ‘er up,” and she smiles seductively at him. Kermit grimaces.

[ Coming up from behind we see a man in an ill-fitting Sheriff’s uniform. It is HENRY KISSINGER. (Yes folks, the real Henry Kissinger. We know it’s impossible, but we’ll get him anyway.) He speaks in his normal voice, with no attempt to impose a Southern accent. ]

Henry
No, no. I’m Sheriff of this here town and it’s my job to make sure y’all behave yourself, y’hear?

Kermit
You are Henry Kissinger, and there isn’t a sheriff in this movie.

Henry
(crestfallen) But I always wanted to be…

Henry
All my life. I just wanted some little part in a movie. 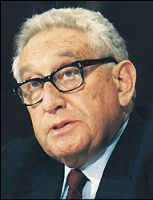 Well, Henry Kissinger isn’t in the movie, for starters. Kissinger is one of the two cameos who’s mentioned by name in the script — all the others are marked as “cameo guest star,” even the laconic old man named George who smokes cigars. The Henry Kissinger cameo may just have been an inside joke for Jerry Juhl and Jack Burns, tweaking the Muppet team’s ambitious guest star plans. Or who knows, maybe they thought they could get Kissinger. 1978 was an interesting year for the Muppet folks; it probably seemed like almost anything could happen.

The other main difference is that this whole section got tightened up in the movie. Typically, one page of a script equals one minute of screen time, and there’s seven pages between the agent’s exit and Kermit’s arrival at the El Sleezo Cafe. In the movie, those seven pages get cut down to a little more than one minute. (Yup, that’s right, folks, I’m writing an entire Anthology chapter based on one minute of the movie. We may never get out of this alive.)

There’s an obvious structural reason why all of this got cut; Kermit’s journey, as described above, is made up of four disconnected scenes that have little to do with each other or the rest of the movie. Of the four, the one scene that has any relevance is Kermit riding past the Doc Hopper billboard — Doc Hopper’s assistant spotting Kermit is a major plot point. But, as written, that scene just goes by, with no dialogue, and Kermit doesn’t even notice the billboard. These scenes spend more time establishing the gas station attendant’s love life and Henry Kissinger’s career plans.

In the movie, all of this is condensed into one scene. Kermit rides his bike along the road, and spots a big Doc Hopper billboard. He’s so distracted by the billboard and the huge green frog legs rising above him that he doesn’t notice that he’s riding straight into a construction site. Hopper’s assistant Max is overseeing the construction of a new restaurant, and he takes a moment to look Kermit over before the steamroller smacks the frog, and destroys his bike. Kermit says, “It’s a good thing frogs can hop, otherwise I’d be gone with the Schwinn,” and then it’s on to the El Sleezo.

Bang, that’s it, we’re done, El Sleezo. All the important stuff from those four scenes is still there — the threat of Doc Hopper is established, Max spots Kermit, Kermit’s bike gets destroyed, and there’s a cheap, funny gag — but it all comes together in one moment. The six scripted scenes between the swamp and the El Sleezo would have just dragged on screen — especially the Prince Charming scene, which doesn’t really connect to anything else. Instead, they cut it down to one scene — faster, funnier and more dramatic.

So that’s the magic of this movie, I think, right there in that revision. They got as far as this — a really funny, almost finished product — and they said, nope, it’s still not good enough. We can do better. And, amazingly, they did.

Next in the Anthology: A three-page essay on one more dang minute of the movie. Hang in there, folks, we’ll get through this. Chapter 4: Slow Night at the El Sleezo.