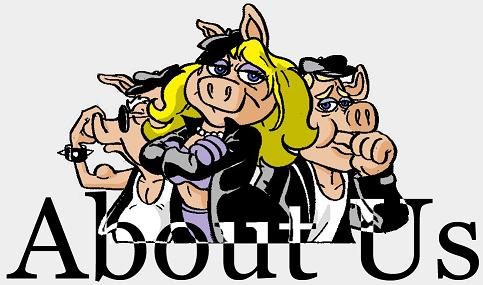 ToughPigs is a website for Muppet fans who grew up. Our mission is to provide a website and forum for biting satire, poignant observations, and general wittiness related to the Muppets, Sesame Street, Fraggle Rock, and all things connected to Jim Henson’s life and legacy.

Joe Hennes is the co-owner and Editor-in-Chief of ToughPigs.com. Joe is a former Clevelander, current Brooklynite, and all-around nice guy. He has previously worked as a stir-fry chef, a classic rock radio DJ, hoodie-maker, children’s television employee, and four separate costumed mascots. He enjoys playing the ukulele, reading DC Comics, and writing about Muppets. He can be reached at Joe@ToughPigs.com.

Ryan Roe is also the co-owner, senior contributor, and editor of ToughPigs.com. Ryan used to live in Texas, and now he lives in Queens. He works at an audio visual company by day, and spends the rest of his time watching too much TV, reading, playing video games, and who knows what else. He can be e-mailed at Ryan@ToughPigs.com.

Danny Horn is the previous owner and creator of ToughPigs.com. Danny created MuppetZine, the first Muppet fan ‘zine, from 1992-1997, and then wrote for ToughPigs from 2001 to 2005, when he handed the reins over to Joe and Ryan. In December 2005, Danny co-created the Muppet Wiki and is now employed by Wikia Inc. in San Francisco.

Danny’s favorite articles include:
Grover’sMom.com
China vs. Japan (Judging the countries based on Big Bird specials)
My Week with Muppet Breakfast
My Week with The Storyteller (written with Kynan Barker)
My Breakfast with Bear

Chris “Smig” Smigliano is a cartoonist based out of the Boston area and is responsible for the majority of the art seen on ToughPigs.com. http://smigliano.blogspot.com/

Matt Wilkie is a writer from Pennsylvania trying to survive in an L.A. world. He enhances whatever he writes with humor and sees the lighter side of everything. WritingWilkie.com.

Anthony Strand is an aspiring librarian, originally from Hatton, North Dakota, and currently resides in Fulton, Missouri. Anthony has written several articles for ToughPigs.com, and knows more about your favorite TV show than you do.

Extra thanks to our donors Amy Frushour Kelly, Carolyn Wiesner, Martha Crannell, Peter Papazoglou, Leah Hooper, Cathy Whitlow, Smig, and Quinn Rollins! Please click here if you are interested in donating to the ToughPigs cause.