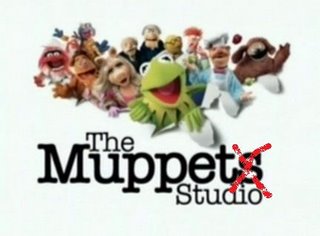 I don’t know about you, but I’m sick of “Muppets.”

Not the Muppets, mind you — I think those guys are great. What I’m here to kvetch about today is the grievous misuse of the plural form “Muppets” vs. the singular “Muppet” in titles. For example, the division of Disney that owns Kermit and Gonzo and Mr. Poodlepants and the rest is called “The Muppets Studio,” and holy clam chowder does that bug me. The 2008 Christmas special was called A Muppets Christmas: Letters to Santa. Does this not flip a switch labeled “BROW-FURROW” in anyone else’s brain?

When Kermit and Piggy and Marvin Suggs and the rest took the television world by storm in 1976, was their show titled The Muppets Show? No. When they made their motion picture debut in 1979, was the film called The Muppets Movie? No. Is their 1981 magnum opus called The Great Muppets Caper? No, sir or madam, it is not. We have The Muppet Show, The Muppet Movie and The Great Muppet Caper, and so we should have “Muppet Studios” and A Muppet Christmas: Letters to Santa.

That’s a good way to remember it, anyway: If the title still makes sense when the word “Muppet” is replaced by an adjective, the singular should be used.

Let’s try it on some other titles:

I’m not really sure where this problem started. Was it with the Ed Sullivan Show compilation DVD Muppets Magic in 2003?

Okay then, I think I’ve run out of ways to take the letter S way too seriously, but I just hope this never happens again. If Kermit and Fozzie and Angel Marie and the rest make a new holiday special anytime soon, I don’t want to see A Muppets Halloween, I want A Muppet Halloween. Nor do I want A Muppets Thanksgiving, A Muppets Easter, or A Muppets Muppets Underwater. All I’m asking, really, is that they drop the S when it’s not necessary. That’s not unreasonable, is it? I don’t think so.

Click here to replace the word “Muppets” with an adjective on the Tough Pigs forum!

*”The Muppet Studio” would also be acceptable.

**Also, interesting fact: The Muppets Take Manhattan is one of only a few Muppet titles that are complete sentences. I can think of two others. How many can YOU come up with?

265 Dollars Worth of Kermit

No, We Don’t Need a Muppet Great Gatsby

Muppets in Progress: A Guide to Revisiting Season 1 of The Muppet Show