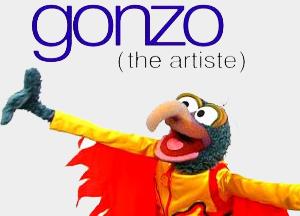 I have a theory. It won’t be a popular one, and I am fully expecting to have to face the wrath of more than a few Muppet fans after saying this. But it needs to be said. The Muppet Movie ruined The Great Gonzo.

In his first years on The Muppet Show, Gonzo was fueled by one thing: the pursuit of art. He found that thrill by any means necessary, whether it was through bizarre digestion, random musical cues, or props that should never be used in public. And if that art happened to result in a daredevil act of ludicrous daring, then so be it. Of course, the daredevil part slowly took a more prominent role, but the need to create art (and the downfall of being misunderstood) was always behind Gonzo’s most bizarre antics.

And then The Muppet Movie came out.

The Muppet Movie might be as close to a perfect Muppet film as we’re ever going to get. It has the perfect mixture of comedy, heart, and familiarity for both the casual Muppet fan as well as the ToughPigs-reading fanatic. Gonzo is treated with the respect that he deserves, playing the role of a plumber/artiste who wants to move to Bombay to become a movie star. He doesn’t want to be shot out of cannons or dance in a barrel of guacamole, he just wants to create art in a challenging way. But the great mistake comes when he’s given a chance to show that there’s more to him than chickens and the bizarre. Gonzo gains a third dimension when he sings the song.

“I’m Going to Go Back There Someday” is a fantastic song, and one of Paul Williams’ finest. It’s heartbreaking and tragic, with a hint of the hopeful. And it ruined Gonzo forever. 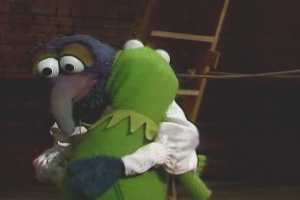 Suddenly, it became okay for Gonzo to show a more tender side. One example that comes to mind is the Lola Falana episode of The Muppet Show when Gonzo realizes his dream of moving to Bombay and has to say goodbye to his Muppet family. He shares a tender moment with Kermit in which the two little guys choke back a few tears and enjoy a firm embrace. It’s a heart-wrenching scene, especially because we’re still not used to a non-wacky Gonzo. The entire sequence is tastefully done, but it’s just the next step in that slippery slope of Gonzo’s life.

As The Muppet Show went on, Gonzo’s acts became less artistic and more death-defying. He was no longer eating tires and wrestling bricks, but he would fly motorcycles, ride catapults, and fight crabs. The pursuit of art is nowhere to be found, but we can forgive Gonzo because his stunts are still entertaining and original.

Cutting ahead through The Muppets Take Manhattan (in which Gonzo’s two memorable scenes include him crying and performing another suicidal stunt) and The Jim Henson Hour (in which Gonzo is grandfathered into a more executive role, sweater vest and all), Gonzo seems to be getting older and more mature in a natural progression. His wacky antics are becoming slightly harder to come by and a little more forced with every passing year.

In The Muppet Christmas Carol, Gonzo’s artistic sensibilities come back, but they’re automatically accepted by the audience since he portrays the physical representation of Charles Dickens. His stunts seem almost out of place since he’s a bizarre mixture of a 19th century author and a… whatever. It was at this point when Gonzo’s struggle for artistic expression officially died, never to return. I don’t blame Muppet Christmas Carol; this fate was predestined to happen one way or another.

By the time we get to Muppet Treasure Island, Gonzo’s motivations are completely up in the air. He likes excitement and the thrill of the open seas, but his reasons are long gone. He and Rizzo act as tagalongs to someone else’s adventure with no character arcs of their own. 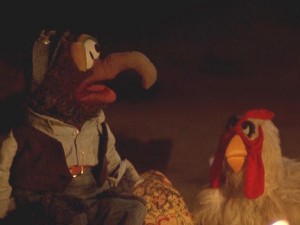 And then there’s Muppets From Space, in which Gonzo is given the spotlight for the very first time. But his character had gone through so many changes since his Muppet Show days that he became almost unrecognizable. Gonzo spends most of the movie being depressed, feeling out of place, and wondering how he fits into his world. His dream to create something new and unique to share with his audience is completely gone. Meanwhile, we’re asked to focus on his parentage while not being completely sure who this character really is. And amidst all of this angst and despair is a song hidden at the end of the movie’s official soundtrack: a new version of “I’m Going to Go Back There Someday.” It was the song that made it okay for Gonzo to cry, to feel like he doesn’t belong, to wish for something beyond the pursuit of art.

Of course, this was far from the end of Gonzo’s mopey side. He had to prove that he had a loving heart in Muppets Wizard of Oz, he all but slept his way through Studio DC, and he crooned the ballad “I Wish I Could Be Santa Claus” in Letters to Santa. In recent years Gonzo has been showing more heart than most of the other Muppets combined, and he’s the one character who should be immune to that responsibility. His sole purpose used to be his need to bring culture to his public, but his latest appearance showed his main ambition to be delivering a sad youngster’s letter to the North Pole.

It’s difficult to blame one song recorded over 30 years ago for the state of Gonzo today, but if “I’m Going to Go Back There Someday” didn’t exist, would Gonzo still be the free-wheeling avant-garde performance artist we first fell in love with? Or would Gonzo’s sadder side have come to the surface no matter what? I suppose we’ll never know, but I have to wonder if there will ever be a way for Gonzo to go back there someday. And if he does, I know the perfect song for him to sing. 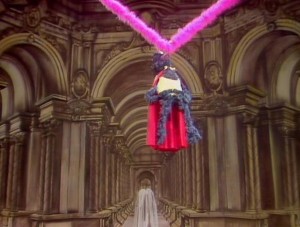 Click here to eat a tire to the tune of The Rainbow Connection on the ToughPigs forum!

Did You Know… The Muppet Show Is a COMEDY?

Good Grief, The Comedian’s a Bear: Perfection on The Muppet Show