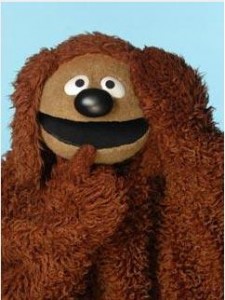 I’ve hesitated to bring this up for a while now, because I’m afraid it may ignite the kind of controversy that could rip the Muppet fan community apart, pitting brother against brother and frog against pig, but I can hold my silence no longer. I must stand up and ask this question, which has been gnawing at my brain for untold ages:

What’s the correct way to pronounce the name of Rowlf the Dog?

Rowlf is one of the oldest and most beloved major Muppet characters. He’s been around for four decades, so you would think everyone would know his name by now, yet there doesn’t seem to be a universally agreed-upon standard.

Of course, I’m writing these words and not speaking them, so it would be pretty darn clever for me to just say, “It’s easy! His name is pronounced ‘Rowlf!’ HAW! HAW!” But no, that’s not good enough. I want to get to the bottom of this vitally important issue once and for all. So I’m writing this Muppet fan website article, which I believe will soon be considered one of the finest examples of journalism ever produced by man. Let’s look at the evidence.

One way is to say it like this: “Rolf.” It rhymes with “golf” (the popular sport) or “Dolph,” as in Dolph Lundgren (the popular actor who starred in the 1991 film Showdown in Little Tokyo). I had twelve of our Tough Pigs interns hit the archives for some research, and they found a few Muppet productions in which various actors used this pronunciation. For example, the audio clip below features Lesley Ann Warren on The Muppet Show. This is where she thinks she’s doing a song with Rowlf, only to find Marvin Suggs onstage.

But honestly, is the chick who played Cinderella on TV really an authority on Muppet names? So for further credibility, here’s another one. It’s the announcer from John Denver and the Muppets: A Christmas Together.

It’s not unreasonable to think he received some kind of coaching on how to say the characters’ names at the recording session, right? Even more persuasive than that, though, is this clip from one of the recent Muppet videos on YouTube, in which Rowlf’s fellow Muppet, Rizzo, clearly says “Rolf.”

So that’s one pretty crappy example, one so-so example, and one good example. But I have to say, I don’t think this is the correct pronunciation.

For one thing, the name has a W in it. Where is that W when you make Rowlf’s name rhyme with 18 holes and the guy who played Ivan Drago? For another thing, Rolf is a German name, and while I don’t think it’s ever been revealed what breed of dog Rowlf is, he’s definitely not a German shepherd.

So let’s look at another option: Pronouncing it the same way as the name “Ralph.” Here’s one guy who says it that way: It’s Jimmy Dean, the fellow who gave Rowlf his big break on national television. This next clip is from a sketch on The Jimmy Dean Show, naturally.

So there’s that. But you might say, “Jimmy Dean is just some yokel country singer who happens to make delicious sausage-and-egg biscuits. What does he know?” And you’re absolutely right — Jimmy Dean does make delicious sausage-and-egg biscuits. But here’s a presumably more reliable source, a lady who never had a hit country song in her life: It’s Jane Henson, and this clip is from the PBS Great Performances special, The World of Jim Henson.

And check this out… From the same documentary, a guy even closer to the character than Jane: It’s Frank Oz, the man who was chiefly in charge of making half of Rowlf’s fingers wiggle in the early days.

To my ear, they’re definitely pronouncing it “Ralph,” as does Rowlf’s co-worker Scooter in this clip from The Muppet Show.

You might think I’ve come to the conclusion that “Ralph” is definitively the correct way to pronounce Rowlf’s name. Well… not exactly. The way I’ve always understood it, Rowlf’s name should be pronounced almost like “Ralph,” but not quite. When I say it, it’s kinda like “Raowlf” or “Raoulf” or maybe “Raaouhwlff.” I’m pretty sure Jim Henson intended for the character’s name to recall the sound of a dog barking, so I figure “Rowlf” is the canine version of “Ralph.” Like, maybe if dogs could talk, that’s how they’d say it.

Fortunately, Rowlf is, in fact, a dog who can talk, so he’s the ultimate authority on his own friggin’ name. Now here’s where the definitive evidence comes in. This first clip is from The Muppets Go Hollywood.

And here’s one we’ve all heard at least fifty-five thousand times: It’s from the intro to “I Hope That Somethin’ Better Comes Along” on the Muppet Movie soundtrack.

I’ve just listened to those two snippets four thousand times each, and no matter how I twist and bend my ear, I just can’t get it to hear “Rolf.” To me, it sounds mostly-but-not-exactly like “Ralph,” so that’s the pronunciation I’m sticking with. If Lesley Ann Warren wishes to challenge me on this, she can contact me at the e-mail address below.

I’ve just written way, way, way, way, way too many words on this topic (way, way, way), but now I’m curious, and I’d love to know which pronunciation is more prevalent among Muppet fans, so I went ahead and started a poll on the Tough Pigs forum. It’s a poll, technically, but I see it more as a survey. The question: How do you pronounce Rowlf’s name? “Rolf?” “Ralph?” Or the more nuanced “Raoulf?” Or maybe you have yet another pronunciation.

So click here and place your vote now! Meanwhile, I can’t help but think that all this hullaballoo could have been avoided if Jim Henson had just named his dog puppet “Waggington” like he considered.

Click here to talk about Rowlf’s name on the Tough Pigs forum! Or did I already say that?

Why Does Everyone Love Pigs in Space So Much?