“Why are they so impressed with the voice? The voice is nothing. I didn’t create a voice, I created a character, and the voice came afterwards.”
-Frank Oz (A&E’s Biography: Sesame Street) 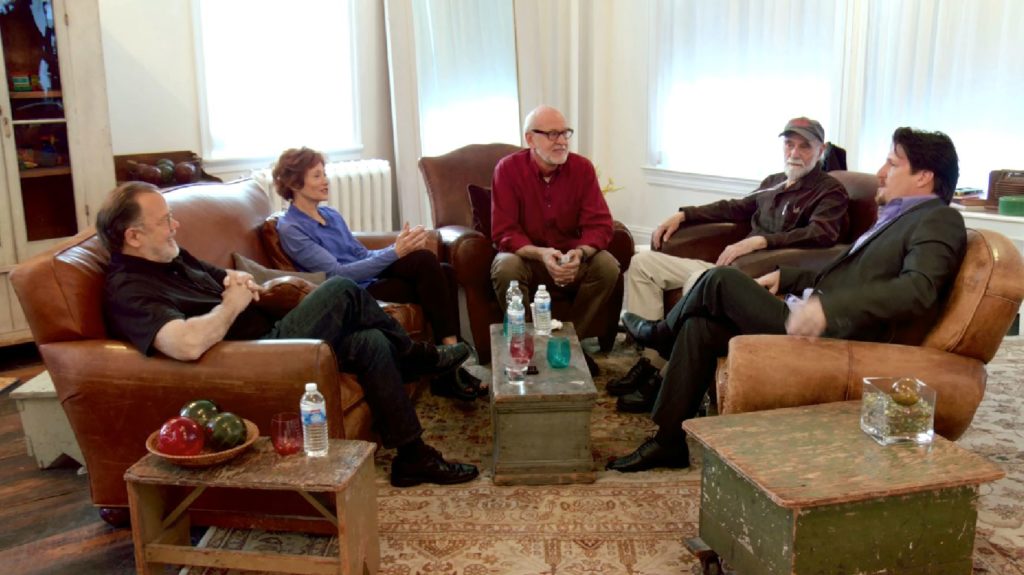 Last Friday, March 16, the documentary called Muppet Guys Talking was released online. The stars of the film are show business veterans, but they’re not usually in the spotlight – it’s the characters, not the puppeteers, who get all the glory. In the days leading up to the film’s release, they’ve been getting a lot of press, which must be nice for them to see, except for one phrase that frequently pops up in the coverage – a phrase that might just make their skin crawl every time they see it.

That phrase is “voice actors.”

For example, when the trailer went live, The Digital Fix went with the headline “The Original Voice Actors Reveal Their Stories!” And when Good Morning America posted their interview with the performers online, the description started with “The voices behind the characters…”

It’s an easy mistake to make. With extremely rare exceptions, the Muppet people do, in fact, provide the voices of their characters. But to call them “voice actors” is simply not accurate. And you know, if you can’t turn to the internet for accuracy, where can you turn?

Of course, voice actors are talented people. They stand in front of a microphone and create a performance using nothing but the sounds that come out of their mouths. That’s a great skill, and the best voice actors deserve the long, prolific careers they’re often blessed with.

But Muppet performers are… not that. They’re another species entirely. Muppet performers work with microphones, sure, and they come up with funny voices for wacky characters, but those microphones are attached to them while they hold their arms up in the air, run around soundstages, squeeze into uncomfortable positions, and get squished against their colleagues all day, all while staring at monitors. And acting.

Just look at veteran Muppet performer Dave Goelz’s performance as Gonzo singing “I’m Going to Go Back There Someday” in The Muppet Movie:

Did you cry? I bet you cried. There’s so much emotion emanating from that scruffy little puppet. He subtly sways to the music, he casts his eyes sadly to the ground and hopefully up to the sky. Dave’s voice sells the emotion of the song, sure, but it’s his puppetry that really gives the scene its weight. Meanwhile, the other Muppet performers speak volumes with their characters without uttering a word. Including Dave’s colleague Jerry Nelson, who is playing a chicken.

As a life-long, dyed-in-the-fleece Muppet fan, when I hear a less-nerdy consumer of Muppet media refer to Frank Oz as “the voice of Miss Piggy on The Muppet Show,” I always wonder whether that viewer even noticed that Miss Piggy is a tangible, physical puppet. Did they notice that she’s constantly moving, whether she’s snuggling up to Christopher Reeve, dancing with Elton John, or karate-chopping Kermit? And did they think a stagehand did all that moving while Frank Oz sat in a recording booth drinking coffee? 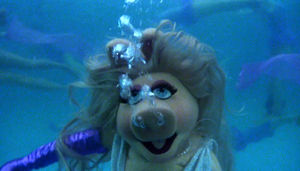 No, it was Frank Oz with his hand in that puppet, and like all the Muppet performers, he suffered for his art. During a 2018 appearance at the Museum of the Moving Image in Queens, Frank discussed the filming of the “Piggy’s Fantasy” water ballet sequence in The Great Muppet Caper. That number called for Miss Piggy to spend a lot of time swimming, and that meant that Frank was stationed at the bottom of a heated pool, his feet weighted down so he could not float up to the surface. A diver nearby held an air hose, so at the end of a take, Frank would take the hose so he could breathe, then as soon as “action” was called, the diver would take back the hose and Frank would resume working the puppet while holding his breath.

Or take the “Rainbow Connection” sequence in The Muppet Movie. Everyone loves that number, but the majority of folks who have enjoyed it probably have no idea how it was achieved. Muppet fans are familiar with the crazy story, which is retold in Muppet Guys Talking: As seen in the wide shots, Kermit the Frog is sitting on a log in what is essentially a real, swampy pond built on a studio backlot. Unlike the classic Sesame Street sketches, there was no fake brick wall for Jim Henson to simply hide behind. He was under the surface of the water in a tiny, cramped, airtight diving bell, with an oxygen line so he could breathe and his arm in a rubber sleeve that went above the surface and allowed him to perform the Kermit puppet. And he had to do that for five days. And Jim was 6’3″.

Those are extreme examples. But even the seemingly simple gig of a Muppet appearing on a talk show can be demanding for the performers. For example, look at this image from a 2015 Kermit and Piggy appearance on Jimmy Kimmel Live: 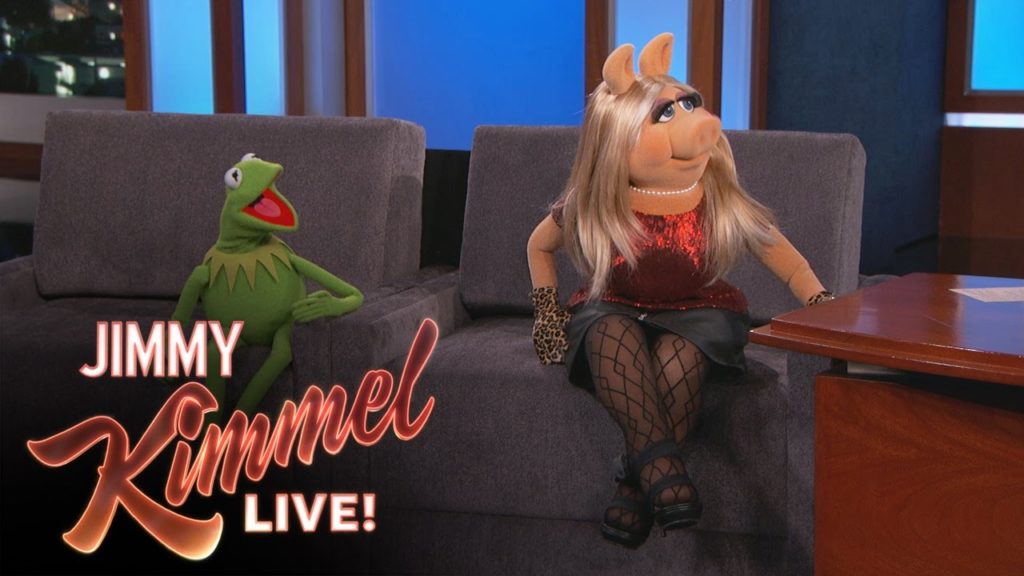 Where the heck are the puppeteers?! They’re not, as YouTube commenter LanceTV suggested, “wearing the cloak of invisibility.” No, they’re stuffed inside those chairs with their arms sticking through into the puppets. But even when you understand this fact, it’s like… How? How can two full-grown adult men (Steve Whitmire and Eric Jacobson, in this case) fit themselves in that space… and then wiggle those puppets for the duration of the interview? It would be reasonable to expect that their arms would fall off. 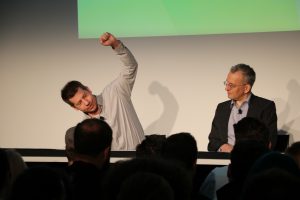 And in fact, at a VultureFest panel in 2016, Eric talked about a particularly memorable talk show appearance when his hand fell asleep partway through the interview, at which point Miss Piggy began to give noticeably shorter and shorter answers to the host’s questions.

How long can YOU hold your arms straight up in the air? I can do it for just a couple of minutes before they start to get tired. And fortunately, I can put them down. But these guys have to hold theirs up for several minutes at a time, all day long. In the A&E Biography special on Sesame Street in 2001, Caroll Spinney talked about traveling to Melbourne, Australia to perform Big Bird in a parade that lasted an hour and 45 minutes. That’s almost two hours inside a bulky costume, holding up a 4.5-pound bird head!

That’s another extreme example, but still… That’s not voice acting.

Not to mention those moments when the Muppet performers have to get uncomfortably close to each other. Just look at this image, often circulated on the internet: 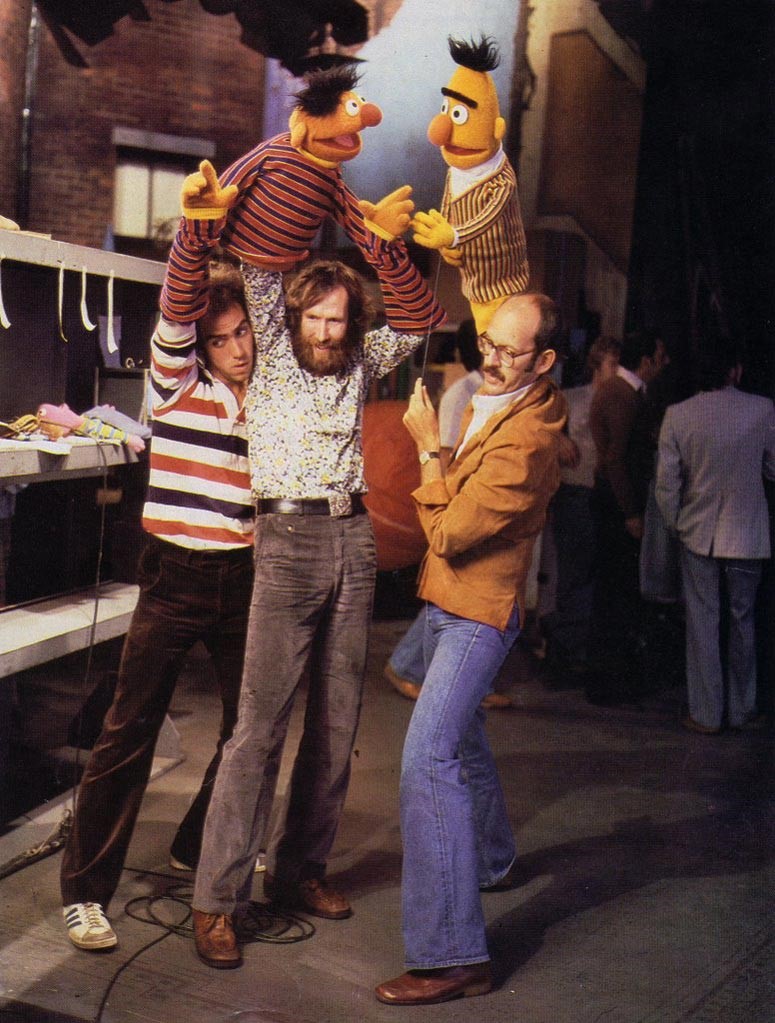 When people who are not Muppet geeks see this image, they often comment on the fact that the guy on the left has his face in Jim Henson’s armpit. That guy, of course, is Richard Hunt. He was one of the most prominent Muppet performers from the 1970s to his death in 1992. He played Don Music, Forgetful Jones, and Placido Flamingo on Sesame Street; Scooter, Beaker, Janice and Statler on The Muppet Show; and Junior Gorg and dozens of others on Fraggle Rock. He was a big deal in the Muppets. And yet, sometimes his job was to stick his face in his boss’s armpit.

In the Muppet Guys Talking documentary, the titular Muppet guys talk about performing while perched precariously on a forklift, riding a makeshift elevator, and buried in a hole in the woods. They do whatever it takes to make the scene work. The work they do is often strenuous, often exhausting, and always very physical. And it’s not voice acting.

So the next time you hear someone call these guys “voice actors,” try politely but firmly correcting them. It’s the least you can do for the Muppet performers after all they’ve gone through to entertain you.

For more on this subject, head over to the amazing Muppet Wiki and take a look at the collections of behind the scenes photos to see lots of full-grown adults squeezed into odd positions with their arms over their heads!

P.S. “Muppet performer” is the preferred terminology. You could call them “Muppeteers,” but Jim Henson reportedly hated that word. But that’s a topic for another time!

Click here to hang out inside a chair on the Tough Pigs forum! 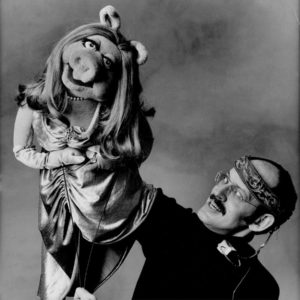 No Thanks, I Don’t Want a Jim Henson Movie