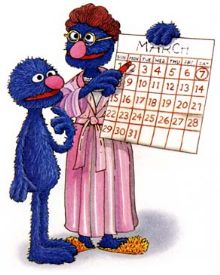 The good thing about being raised on a steady diet of Sesame Street is that it made me intelligent, sensitive to other people’s needs, and very well-informed alphabetwise. The bad thing about it is that I have an attention span that can’t be seen by the naked eye. If a minute goes by and somebody doesn’t explode or burst into song, I start getting antsy — which, as you can imagine, makes for an interesting home life.

Luckily, being a Muppet fan, there’s been enough material over the last 45 years to provide me with an endless supply of minor enthusiasms. Which is all my way of saying that this week I’m finding myself completely obsessed with The Many Hairstyles of Grover’s Mom. 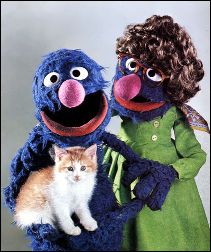 Now, I may be wrong about this, but as far as I know, Grover’s Mom never actually appeared on Sesame Street. If she did, it can’t have been very often. Grover mentions his mom sometimes, but I can’t remember ever actually seeing her, and I’ve never seen a performer credited with playing her. The only evidence I have that a Grover’s Mom puppet was ever built is this picture, which could just as easily have been a regular old Grover puppet rigged up with a wig just for this photo shoot.

And yet — and this is the thing that fuels my minor enthusiasm — she is all over the storybooks.

Oh, by the way, this is the wrap-up for the latest Muppet Scavenger Hunt contest. Last week, I asked people to send in pictures of Muppet characters with their relatives, and a whole bunch of people did. Those people are expecting me to post the results of the contest, and show off some of the cool pictures they sent in. But I just can’t get my mind off Grover’s mom. 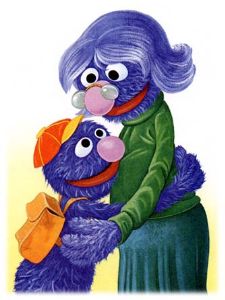 You see, I asked for both Muppet and Sesame Street relatives, and the Muppet relatives all turned out to be pretty much the same. Most of the Robin, Gonzo and Uncle Traveling Matt pictures overlapped each other, which means that they’re probably everywhere on the web, and also how many pictures of Robin do you really need to see.

So, I’m just going to do a quick box score, and then it’s on to Grover’s mom. The final scores are as follows. Tying for first place with four points: Jess Healey (aka Captain Cully), Jake Barker (aka C’irdan) and Sarah Soper (aka Tellygirl). By the way, a little sidebar: I love that my life is full of people with aliases. It makes me feel like a super-spy. In second place, with three points: Carla Foss (aka Cotterpin). Coming in with two points: John Hamilton (aka Goodnight Jack), Nate Downs (aka RadioNate) and Huy Nguyen (aka Huy Nguyen).

So, hooray for the fantastic scavengers, and the first and second place winners will all get toys. So anyway, back to Grover’s Mom.

The families of Sesame Street characters appear a lot more often in storybooks than they do on screen, for the obvious reason that the illustrators don’t actually have to build new puppets. That means the characters can have huge, extended families in the books, and all the artist has to do is take the original character designs and stick some wigs on ’em. Which gives you family scenes like this: 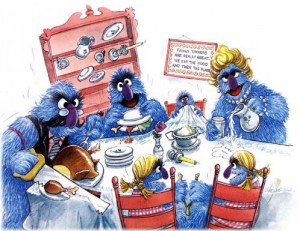 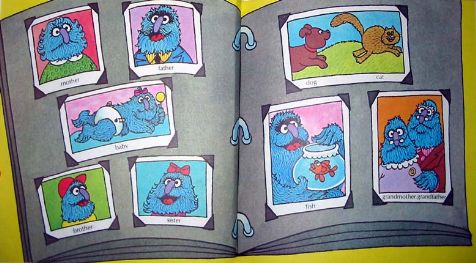 or, on the other hand, this: 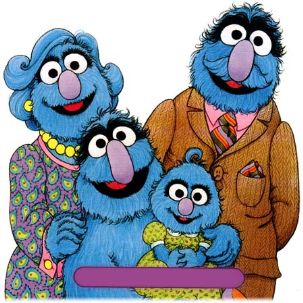 See what I mean? It goes on and on. Once you start looking for them, they’re all over the place, and lots of them have huge bushy mustaches. Even Herry, who’s a secondary Sesame character at best, gets a whole slew of siblings, at least one of which is named Flossie: 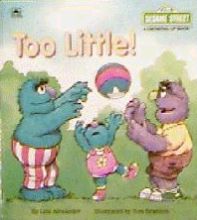 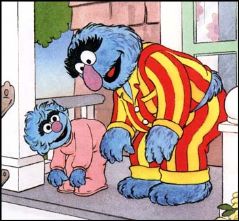 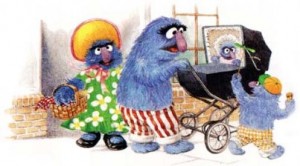 I mean, is this interesting to anybody but me?

Not that I found any of these myself. I just announced the contest. Really, the obsessed one is my pal Scott Hanson, who makes Back Stage Left. Some of these pictures got sent in by other contest entrants — especially Sarah, Jess and John — but most of them were scanned from Scott’s apparently bottomless library of Sesame Street books. I was talking to Scott on instant-messenger as I was looking through the scavenger hunt entries, and we started wondering — as Muppet fans do — about Grover’s Mom and her hairstyles. We both started looking through our Sesame books. And, I guess, once you start looking for Sesame relatives, it’s just really hard to stop.

For example, did you know Cookie Monster has a nephew named Max in the book “No Cookies?” He also has a niece called Baby Monster, which has to be a name that’s hard to grow into. 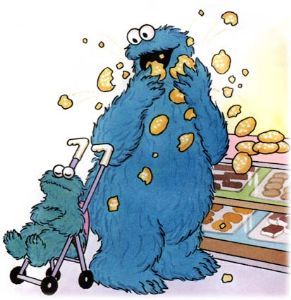 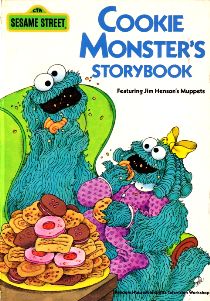 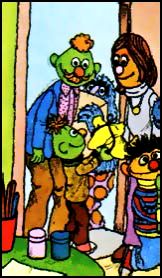 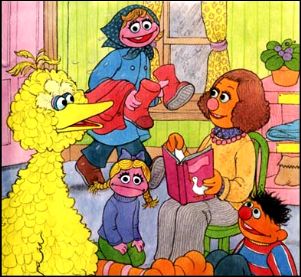 … and the Count has a whole family tree. 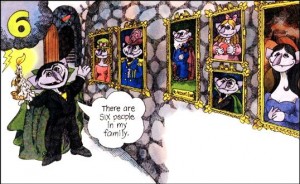 You see? It’s addictive. Once you start looking for them, it’s hard to stop. 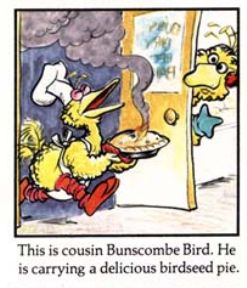 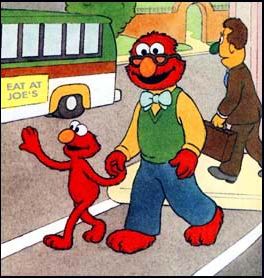 And then, over and over, we found Grover’s Mom.