These are busy days for you fans of Fraggles on the printed page! Not only have you been getting some quality Fraggle Rock material for the past few months, but you’ve been privy to all the scoop right here on ToughPigs!

Two months ago, we featured Q&As with the creative team of Fraggle Rock #1. Last month, we repeated the process with a few more. And now we’re prepping for the final issue of this miniseries with one last go-around with the artists, writers, and editors responsible for all that Fraggly goodness.

To kick off the festivities, we’re chatting with writer Grace Randolph and artist Whitney Leith, the team behind the Doozer story in Fraggle Rock #3. If Grace’s name sounds familiar, you may remember her as the writer of the amazing Muppet Peter Pan comic book! She’s a woman of many hats.

And remember, Fraggle Rock #3 is in stores this Wednesday, June 23! Now enough of this jibber jabber; here’s Grace and Whitney! 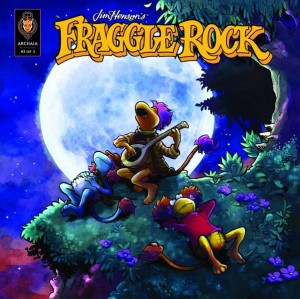 ToughPigs: Since we last spoke, Muppet Peter Pan proved to be a hit among Muppet fans and comic book buyers. Did its success help you to get the gig writing for the Fraggle Rock comic?

Grace Randolph: Actually, editor Tim Beedle was familiar with my work before Muppet Peter Pan, via TOKYOPOP, and offered me to pitch for this gig before the Muppet mini even came out. But I?¢‚Ç¨‚Ñ¢m certainly glad that Muppet Peter Pan was well received, especially the first issue, which is my favorite of the bunch and the one that led to my Marvel Her-oes gig. So it?¢‚Ç¨‚Ñ¢s all good!

TP: How did you first become a Fraggle Rock fan? And what form does your fandom take today?

GR: I must admit that in my family, my sister is the true Fraggle Rock fan. Most of my memories of the show revolve around my sister being excited to watch it and, since we watched TV together, I associate her happiness with Fraggle Rock. That gives me a special kind of fondness for the show and also a great respect for the big fans. I would hate for people like my sister to pick up this book and be disappointed, so I spent a great deal of time re-watching ?¢‚Ç¨?ìFraggle Rock?¢‚Ç¨¬ù episodes on Netflix Instant Streaming!

GR: Well, as I said, editor Tim Beedle was familiar with my work from TOKYOPOP. He asked me to pitch some ideas and luckily this one was approved!

GR: Hmm. I?¢‚Ç¨‚Ñ¢d have to say I love the Doozers and Boober, because they are the most like me! If you combined them, that would be me! I guess that makes my Fraggle Rock name ?¢‚Ç¨?ìDoober?¢‚Ç¨¬ù!

GR: Honestly, all of Fraggle Rock is hard to write. It?¢‚Ç¨‚Ñ¢s a show that exists in a very unique area, and that?¢‚Ç¨‚Ñ¢s between young children?¢‚Ç¨‚Ñ¢s entertainment and adult entertainment. In other words, basically the stories are made to appeal to very young children yet they have a second, sophisticated layer to them that enable adults to enjoy the stories as well. Hitting that mark was very, very tricky.

GR: Good timing! Tim Beedle just shared an email with everyone who worked on Issues 1 – 3 that was from Henson, telling us how much they liked this first batch of the comic! That
was very rewarding to hear!

TP: Now that we?¢‚Ç¨‚Ñ¢ve seen Fraggle parties and Doozer parties, what do you think Gorg parties are like?

GR: Hehe! I can?¢‚Ç¨‚Ñ¢t answer that without possibly giving away how Doozers party! The secret of the Gorg party style will have to be revealed another day!

GR: Please check out my current mini Marvel Her-oes, which tells the story of some of your favorite female Avengers discovering their powers?¢‚Ç¨‚Äùin high school!

GR: Keep hope alive. You?¢‚Ç¨‚Ñ¢ve been fans of the show for decades, and the renaissance is finally beginning… 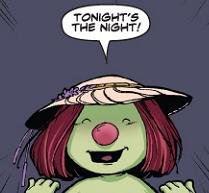 Whitney Leith: I watched it a lot as a child but it?¢‚Ç¨‚Ñ¢s not something that I could sit down and watch nowadays. So it?¢‚Ç¨‚Ñ¢s stored away as a beloved childhood memory along with the Thunder Cats and Dragon Ball Z.

WL: I sifted through the Internet, watched a lot of YouTube and rented the first season of Fraggle Rock. I still have the theme song stuck in my head.

WL: An awesome editor friend of mine that I worked with during my brief stint at Tokyopop helped me get on the project. Which I couldn?¢‚Ç¨‚Ñ¢t be more grateful for because this whole experience has been a lot of fun and I hope Archaia let?¢‚Ç¨‚Ñ¢s me come back and do more work for them.

TP: After looking at your DeviantArt page, it looks like you have a strong background in fantasy art. How does that style help prepare for a story focusing on the Doozers?

WL: Actually the Doozers were pretty odd for me to draw because they were so simple. They?¢‚Ç¨‚Ñ¢re basically cute blobs with eyeballs so I had to fight my need to over detail them. They were a lot of fun, though and it?¢‚Ç¨‚Ñ¢s always good to go outside my comfort zone.

WL: Boober?¢‚Ç¨‚Ñ¢s probably my favorite because in a colorful world of song and dance he still manages to be sad. He is the original Elmo. I have no least favorite character. I don?¢‚Ç¨‚Ñ¢t think I could muster any negative feelings towards anything in Fraggle Rock if I tried. They?¢‚Ç¨‚Ñ¢re just too cute. 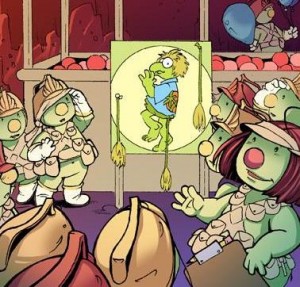 WL: I think the theme both series share is even though we all may be different we are all a part of the same whole. While the Fraggles and the Doozers differ in lifestyles they share a symbiotic relationship. The Fraggles eat what the Doozers build. The Skeksis battle the Ur-Ru for ultimate dominance and power but in reality are two sides of the same coin. One cannot live without the other.

I love the Dark Crystal by the way. I really could just gush about it for hours. You know a movie is well crafted when it still holds up two decades later.

WL: I hope you enjoy of our interpretation of the Fraggle universe and don?¢‚Ç¨‚Ñ¢t you dare let that inner child grow up.

Many thanks to Grace Randolph and Whitney Leith! And tune in throughout the week for more Fraggle Rock comic book Q&As!

Click here to pin the tail on the Fraggle on the ToughPigs forum!