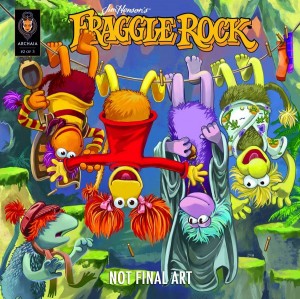 Mr. Joe LeFavi used to be the Director of Publishing and Development at the Jim Henson Company, which sounds like a pretty groovy gig. These days, he’s the Consulting Editor of the upcoming Fraggle Rock comics at Archaia Studios, which sounds equally groovy. And today Mr. LeFavi has agreed to groove with us, as he joins Tough Pigs for a Q&A about his work on the Fraggle comics.

ToughPigs: Perhaps an obvious question: What exactly does a consulting editor do?

Joe LeFavi: The consulting editor is usually the most charismatic and physically attractive editor on the book. Aside from that, we?¢‚Ç¨‚Ñ¢re usually specialists brought onto a project for our expertise on the topics being discussed in the book. In this case, I am Archaia?¢‚Ç¨‚Ñ¢s ?¢‚Ç¨?ìin-house Henson geek,?¢‚Ç¨¬ù whose familiarity and obsessive, uber-fandom concerning all things Jim Henson provides considerable support throughout the creative process.

TP: Do you have any input into the choices for writers and artists for the series? How are they chosen?

JL: Yes, indeed! I?¢‚Ç¨‚Ñ¢ve been aggressively attempting to help package these books with the best writers and illustrators, and I?¢‚Ç¨‚Ñ¢m proud to say that some of our brightest talent resulted from my scheming and selfless pleading.

In regards to the process, all of the editors involved are tasked with pinpointing writers and illustrators with a style and aesthetic tone that complement Fraggle Rock. We didn?¢‚Ç¨‚Ñ¢t want these stories to merely look like Fraggle Rock. We wanted them to feel like Fraggle Rock, and that meant embarking on a tireless search for creators who truly love and understand the franchise. There was essentially a big sign on Archaia?¢‚Ç¨‚Ñ¢s front door: FANS ONLY. NO POSERS ALLOWED.

TP: You previously worked as the Director of Publishing and Development at the Jim Henson Company. How did you get that position? What did your responsibilities include?

JL: As Director of Publishing and Development at Henson, I was primarily their Editorial Director on all their books, comic books, and manga… which means that I spent most of my day reading. I edited every script, reviewed every panel and ensured that anything with the Henson logo on the spine was worthy and respectful of the brand. I also developed their original properties, shopped their proposals, and facilitated key relationships with creators and publishers alike ?¢‚Ç¨‚Äú including Henson?¢‚Ç¨‚Ñ¢s deal with Archaia. Oh, and I also served on select projects in Film, TV and New Media, primarily the ones that I brought into the company. ?¢‚Ç¨¬¶I didn?¢‚Ç¨‚Ñ¢t sleep much, just in case you were wondering. 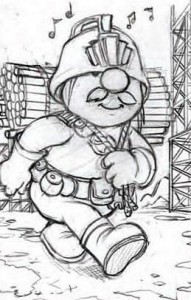 How did I get that job? More scheming and selfless pleading essentially. Just kidding. Sort of. In truth, I had worked at Henson for years as their Story Editor in Film and TV before earning that gig. I was essentially their in-house geek, specializing in science fiction, fantasy, YA literature, comic books, manga and video games ?¢‚Ç¨‚Äú basically, any ?¢‚Ç¨?ìfanboy?¢‚Ç¨¬ù genre that intimidates most normal people with active social lives. Fortunately, I introduced enough great content and creators that Henson began to trust my story instincts. Plus, after so many years speed-reading all the latest and greatest works in publishing, I was making friends with some of the best editors and creators in the biz. So when Henson needed someone to build their new publishing division, they turned to me. And the rest is history?¢‚Ç¨¬¶

TP: How did your Henson job prepare you for your responsibilities as Consulting Editor for the Fraggle Rock comics?

JL: Since I was their in-house editor on all their books, comic books and manga, I definitely gained a clear and intimate understanding of the editorial process. No one can truly understand the manic pace and utter thrill of monthly comics until they experience it. My adventures with Archaia and Boom! on their Henson licenses are some of my favorite and proudest moments.

I must admit that being at Henson also allowed me to meet some incredibly talented writers and illustrators ?¢‚Ç¨‚Äú including some of my heroes. Hence, when it came time to dip creators into the Fraggle Rock talent pool, it was absolutely amazing to approach them again and say, ?¢‚Ç¨?ìHey, wanna work with me??¢‚Ç¨¬ù

TP: How familiar were you with Fraggle Rock going into this project? Do you have a favorite character? Favorite episode?

JL: I am one of the hugest Fraggle Rock fans that you?¢‚Ç¨‚Ñ¢ll ever meet. I have watched all four seasons of Fraggle Rock a number of times?¢‚Ç¨¬¶ and that was before I even worked at Henson! I was literally one of those lucky schmucks who got to work for one of their heroes. Go figure. 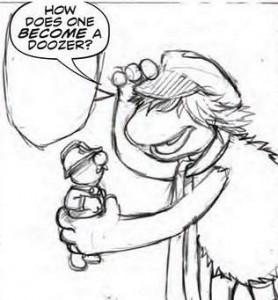 My favorite character is most certainly Boober, though Wembley runs a close second at times. I tend to root for the oddball in the group, and Boober?¢‚Ç¨‚Ñ¢s pessimism and manic obsession with the worst-case scenario always tickled me.

My favorite episode is, by far, the final episode ?¢‚Ç¨?ìChange of Address.?¢‚Ç¨¬ù The episode is written as a heartfelt farewell to the audience, and the subtext throughout that entire story is heart-wrenching and almost overwhelmingly inspiring. They celebrate the purpose of Fraggle Rock in such a simple and poignant way, while so earnestly conveying that final message that everything in life (including you) is magical?¢‚Ç¨¬¶ if you choose to look at it that way. The episode resonates with me, right down to the bone, and (to this day) I can?¢‚Ç¨‚Ñ¢t watch it without crying. And I have no problem saying that.

TP: What do you see as the challenges — or advantages — of adapting a puppet-based TV show to comics?

JL: To be honest, there haven?¢‚Ç¨‚Ñ¢t been many challenges in adapting a puppet-based TV show to comics. Fraggles, Doozers and Gorgs are creatures and creatures belong in comics. Sure, artists are challenged to breathe more life into their bodies and physiques?¢‚Ç¨¬¶ but no more than you would an alien detective or ninja walrus. So if you can find the right artist who loves Fraggles enough to see them as creators more than merely puppets, the imagination easily compensates and poof?¢‚Ç¨¬¶ you?¢‚Ç¨‚Ñ¢ve got a fuzzy, litte Fraggle dancing his cares away. Easy as that.

TP: Will we see any stories that take place outside the usual boundaries of the show — like in Outer Space beyond Doc’s workshop, or in the Gorg’s world outside their front yard?

JL: There was this one story where Gobo enters into Outer Space, and he finds himself in post-apocalyptic America where civilization has devolved into a wild frontier, and Uncle Matt has risen as America?¢‚Ç¨‚Ñ¢s first postman, delivering his own postcards to Gobo as he fights for democracy and justice. But then we realized that Kevin Costner already told that story in “The Postman”, so we decided to avoid any further heartbreak and simply keep Fraggle Rock in Fraggle Rock. 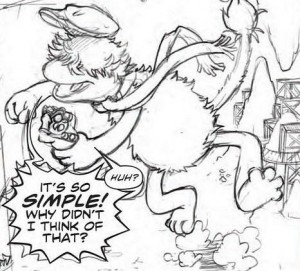 TP: What kind of input does the Henson Company have into the content of the comic? Has anyone involved with the original show consulted on the comic?

JL: Henson is not one of those licensors to say, ?¢‚Ç¨?ìYeah, do whatever you want. Just send us the check.?¢‚Ç¨¬ù Heavens no. Henson is a vital part of the creative process, and approves every script, cover, page and panel for every comic. They are just as committed in crafting a book that Fraggle fans young and old will embrace.

TP: Is there a general set of rules for including obscure characters, locations, and mythologies from the Fraggle Rock universe in the comics? Is it difficult to include these types of references for the fans while avoiding alienating readers who are new to the franchise?

JL: As much as we?¢‚Ç¨‚Ñ¢d love to mighty-morph these books into a fanboy?¢‚Ç¨‚Ñ¢s dream ?¢‚Ç¨‚Äú cover-to-cover with all the obscure, deliciously awesome references only the truest Fraggle fans would know ?¢‚Ç¨‚Äú we can?¢‚Ç¨‚Ñ¢t. New readers should be able to step into Fraggle Rock for the first time and feel at home. That?¢‚Ç¨‚Ñ¢s why we chose the anthology format. Our main stories will welcome fans into Fraggle Rock with accessible, entertaining tales that feel just like the TV show. Then new and old fans alike can enjoy the shorter, back-up tales?¢‚Ç¨¬¶ which take some risks and feature many familiar faces die-hard fans have been dying to see. It?¢‚Ç¨‚Ñ¢s quite a dynamic format and it?¢‚Ç¨‚Ñ¢s been a key factor in making these books fun for everyone.

TP: Finally, do you have a message you?¢‚Ç¨‚Ñ¢d like to pass along to the fans?

JL: Quite simply, thank you. The Henson legacy, and Fraggle Rock in particular, are incredibly dear to me, and without your ceaseless support and committed fandom, none of this would?¢‚Ç¨‚Ñ¢ve been possible. And since these books are quickly becoming some of my fondest memories, I can only express my sincere gratitude for continuing to believe in us, and allowing us to prove that, even after all these years, you truly cannot leave the magic.

And one last thing, if I may be so bold. The bigwigs in the entertainment industry believe that messages of hope, optimism and idealism are antiquated notions that modern audiences don?¢‚Ç¨‚Ñ¢t want to hear anymore. So if you read and enjoy our books, write about it. Email, chat, blog and Twitter about it. In short, prove them wrong. It might be my na?É¬Øve idealism talking, but if we can do that, we might just do a little good in this world. 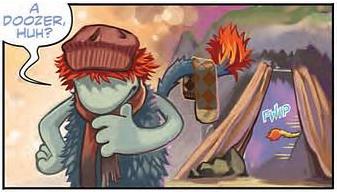 Many thanks to Joe LeFavi for joining us for this Q&A! And don’t forget to come back tomorrow for more Q&As with the Fraggle Rock comic book creators!

Click here to root for the oddball on the ToughPigs forum!