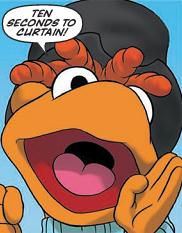 Now that BOOM Studios’ Muppet Peter Pan is finished (and you did your homework and bought and read all four issues, right??), it’s time to give writer Grace Randolph a pat on the back for a job very well done. Or better yet, we can give her a handful of questions to answer. That’s probably safer, in case she has personal space issues.

ToughPigs: Now that the series is completed, how has the feedback been? Both from Disney/BOOM! and the fans?

Grace Randolph: The feedback has been wonderful! And while it was back in September, I’m still very proud of the terrific response issue #1 got, as how a series kicks off is very important. That first issue got fabulous reviews across the board from numerous websites – i.e. Comic Book Resources and Tough Pigs! – plus awesome feedback on the message boards. Also, I was at Long Beach Comic Con in October signing copies of Muppet Peter Pan #1 and it was great to talk face-to-face with people picking up the book. In fact, Muppet Peter Pan was one of BOOM!’s top sellers at LBCC, and it’s great to see that kind of interest from both the Muppet and comic book communities. 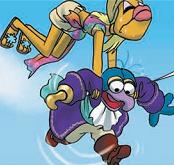 TP: Your portrayal of Kermit is a lot more youthful and naive than his normal interpretation, obviously due to the needs of the story. Did you come across any challenges in finding his voice due to the new direction in which you took him?

GR: Kermit as Peter Pan actually works quite well, because the direction I took him in plays to his strengths as a character. In this Muppet version of the story, Peter Pan insists he’s still a “boy” even though he’s actually grown up, but he does so in a passive aggressive manner which is very Kermit. That’s why he gets along so well with PiggyTink / Miss Piggy, as she’s just plain old aggressive! Speaking of Miss Piggy, Kermit is often oblivious to her innuendo, and here in Muppet Peter Pan that translates into his being oblivious to his own situation (he’s an adult!) as well.

TP: What sort of challenges did you come into when writing Janice/Wendy as a main character?

GR: Haha! I don’t think Janice has ever talked so much in her life! What’s great about having Janice as Wendy is that she’s such a different female voice for The Muppets, as they usually just have Miss Piggy! So first and foremost, it was important to me that she NOT be like Miss Piggy, or Miss Piggy “Lite”. I think that’s been achieved while still keeping her a strong character. 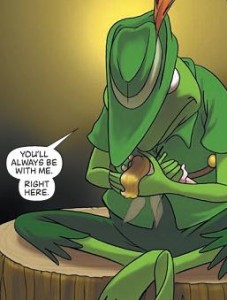 TP: Which characters were the most fun to write? And which were most challenging?

GR: Well, as I’ve mentioned in other interviews, Gonzo was QUITE the challenge. But that made it all the more satisfying when I finally got the hang of him! I was very happy with my introduction of Captain Gonzo in issue #2 as I got to use a lot of my own experiences performing live comedy in NYC.

TP: When writing the pirate scenes, did you use Muppet Treasure Island as a reference?

GR: While I did see Muppet Treasure Island, as I just mentioned my big influence on Gonzo and his pirates was my time as a live improv and sketch comedy performer in NYC. The “cover charge” line in issue #2 is one of my favorite lines, as discovering that your friends must pay an unexpected cover charge is truly harrowing! Poor Peter Pan! Captain Gonzo should really post a sign…

TP: We always enjoy seeing minor and forgotten characters like the birds (“Whaddayasay”, “Righton”, etc). Did you have any other rare favorites that you wanted to include in Muppet Peter Pan?

GR: I’m glad you were happy to see those birds! I wanted to do some exposition in issue #2 but I didn’t want to be sloppy about it, so while I was pouring over the Muppet Wiki I came across them and thought “perfect”! As for other appearances, hmm, I don’t know… You never want to overplay your hand with that sort of thing, y’know? 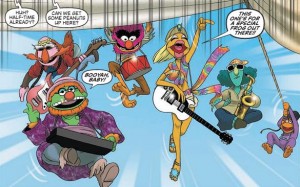 TP: Hypothetically, if you had more issues to play in the Muppet Peter Pan world, what Muppety twists might you have included? (Mermaids? Tiger Lily?)

GR: I did indeed want to include Tiger Lily! I was going to make the Indians the Swedish and she was going to be the Swedish Chef’s daughter — oops! Ack! I’m not supposed to tell you any of this stuff! Forget it! I have said nothing! Carry on…

TP: We just learned that you will be writing “Marvel Her-Oes” for Marvel Comics. How has Muppet Peter Pan prepared you for that mini-series?

GR: Actually, Muppet Peter Pan helped me to get the job! I’d sent Muppet Peter Pan #1 out to the editors I knew, and Sana Amanat over at Marvel read it and thought I’d be a perfect fit with this new project!

TP: Is there any chance we’ll be seeing more of your work with BOOM Kids! soon?

GR: I hope so! Working with BOOM Kids! is awesome, and they are putting out some great Disney/Muppet books. I’d like to continue to help out. 🙂 I’ve been talking to my editor extraordinaire Aaron Sparrow about a few things, so we’ll see…

TP: Finally, do you have a message you’d like to relay to the fans?

GR: The Muppet Renaissance, which BOOM Kids! is a part of, is happening for you, because of you! You are as smart, funny, and streetwise as Kermit and the gang, and that’s what makes this franchise truly unique! Thanks for reading Muppet Peter Pan and I hereby pass the torch to the writers of the upcoming Muppet King Arthur! 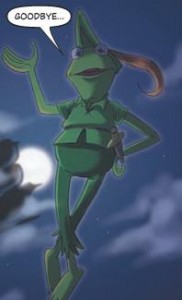 Many thanks to Grace Randolph for joining us for this Q&A, and double thanks for giving us a gem like Muppet Peter Pan!

Click here to go to Neverland (also known as the ToughPigs forum)!

Fraggle Comic Creators Take Us To the Everspring