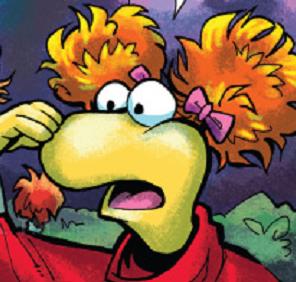 After our rousing Q&A with the writer and illustrator of the Convincing John story in the new issue of the Fraggle Rock comic, we’re more than ready for Act II, Scene I. This time around, we’re sitting down with writer Adrianne Ambrose and artist Joanna Estep, the creative team behind the second story in Fraggle Rock #2, which features everyone’s favorite bumbling explorer Uncle Traveling Matt.

Also, click here to see what our thoughts on Fraggle Rock #2, in stores this week!

Let’s see what Adrianne and Joanna have to say for themselves, hmm? 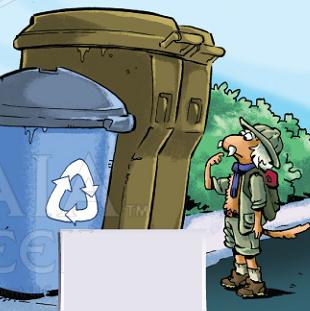 Adrianne Ambrose: I was a huge Muppet fan growing up, but I was unable to persuade my parents to get cable until I was in my late teens, so I did not have much access to Fraggle Rock when it first premiered. Fortunately, the show was so popular that I got to watch it at friends?¢‚Ç¨‚Ñ¢ houses. Today, I frequently find myself humming a Fraggle song while doing the dishes or I entertain myself by looking at the world from the perspective of Uncle Traveling Matt.

AA: I watched a bunch of the episodes. (Yes, it?¢‚Ç¨‚Ñ¢s a hard life when your job involves hours of watching classic television.) Then I just went on long walks and let my mind wander off with the different characters to see what additional adventures they might encounter.

AA: I knew the managing editor, Tim Beedle, and he asked me if I would like to submit a few pitches.

TP: You are one of the few writers who gets to have stories in more than one issue of the Fraggle Rock comic book. Did the fact that you get to play in more than one sandbox affect your approach to either script?

AA: First of all, Yay for two stories!

I knew I had a few pitches still in the hopper, but I didn?¢‚Ç¨‚Ñ¢t know I had the second story until I was finished with the first. But, it is definitely nice to play in a few different sandboxes. ;o) 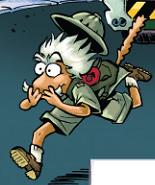 AA: I come from a family of hardcore travelers, so definitely Uncle Traveling Matt. There have been times when I?¢‚Ç¨‚Ñ¢ve been traveling alone in a foreign country, encountered something completely alien to me and had to draw my own conclusions, so I can definitely relate to his character. I?¢‚Ç¨‚Ñ¢m not sure about my least favorite character.

AA: In my second story, I was having trouble with the Gorgs for some reason. I wasn?¢‚Ç¨‚Ñ¢t getting their exact vernacular. Fortunately, my mighty editor, Tim Beedle and Archaia?¢‚Ç¨‚Ñ¢s resident Fraggle expert, Joe LeFavi, were there to get me on track.

AA: Working with The Henson Company has been great and their response was very positive. Tim is a wonderful editor and, being a writer himself, he really knows how to work with writers. The Jim Henson Company is careful about protecting the integrity of the characters, but they also want creators to have the freedom to make fun and interesting stories.

AA: My favorite Fraggle is prominently featured and he?¢‚Ç¨‚Ñ¢s experiencing how the world has changed in the last couple of decades.

AA: Yes, I am happy to agree with Traveling Matt. I love acting silly and being amused by other people?¢‚Ç¨‚Ñ¢s odd behavior.

AA: I have a humorous tween novel coming out with Belle Bridge Books in mid- July. It?¢‚Ç¨‚Ñ¢s about a comic book-loving geek who lands a spot on the cheerleading squad. Suddenly, she finds herself torn between her best friends and the chance to be popular. Ted Naifeh did the cover art and there?¢‚Ç¨‚Ñ¢s comic book text that?¢‚Ç¨‚Ñ¢s interwoven within the novel. It?¢‚Ç¨‚Ñ¢s called What I Learned From Being a Cheerleader and will launch July 15th. It?¢‚Ç¨‚Ñ¢ll be available from your favorite online bookstore, local bookstore or direct from Belle Bridge Books.

AA: Yes! Have fun! Make friends and have adventures! 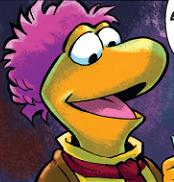 Joanna Estep: Okay, time to reveal my dirty secret: Fraggle Rock is actually one of the few Henson properties I am unfamiliar with. I came to the project with no idea of the premise of Fraggle Rock, and I didn?¢‚Ç¨‚Ñ¢t even know the characters?¢‚Ç¨‚Ñ¢ names. But in hindsight, I can?¢‚Ç¨‚Ñ¢t imagine a better way to get to know the Fraggles than to personally illustrate a part of their world.

TP: What sort of research did you do in preparation to draw Fraggles?

JE: I watched a bunch of Fraggle Rock clips on youtube to get a clearer idea of the look and feel of the series. Aside from that, Henson was very helpful in providing me reference material for the characters, environments and color schemes of Fraggle Rock .

JE: Archaia Managing Editor Tim Beedle and I have been friends since I was drawing Roadsong for Tokyopop, and we have been waiting for a chance to work together. He contacted me about drawing Fraggle Rock, and it sounded like fun so I hopped on board.

JE: I like Red Fraggle, because I love to draw her poofy hair. And I don?¢‚Ç¨‚Ñ¢t have a least favorite! Are not all Fraggles created equal?

TP: Which characters have been the most difficult to draw?

JE: The less reference material there is for a character, the harder they are to get right. I struggle the most with lesser-known characters/creatures such as the Rumble Bugs, or Large Marvin, because I have fewer photo references and it can be difficult to get a clear idea of what they look like. 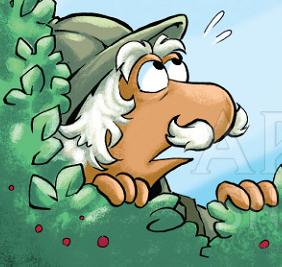 JE: Overwhelmingly positive! I hear everything secondhand via my editor, but he says that both Henson and Archaia give my work glowing reviews, and I?¢‚Ç¨‚Ñ¢m inclined to believe him.

TP: Be honest, what do you think Doozer sticks really taste like?

JE: Depends on whether or not they?¢‚Ç¨‚Ñ¢re made from real Doozers.

JE: For something completely different, check out my self-penned story, Happy Birthday Michael Mitchell on Tor.com, or if you?¢‚Ç¨‚Ñ¢re up for a longer series, try Roadsong from Tokyopop.

JE: Don?¢‚Ç¨‚Ñ¢t eat too many Doozer sticks, don?¢‚Ç¨‚Ñ¢t get thumped by a Gorg, don?¢‚Ç¨‚Ñ¢t try to go swimming in your turtleneck shirts the way the Fraggles seem to do, and above all: Keep on rockin?¢‚Ç¨‚Ñ¢ in the free world! 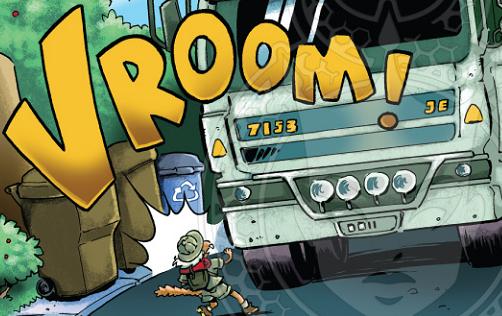 Many thanks to Adrianne Ambrose and Joanna Estep for agreeing to chat with us! Head on back here for more Q&As throughout the week!

Click here to write a postcard about something mundane on the ToughPigs forum!