Earlier this week, we got to chat with the writer and artist responsible for the Doozer story in the latest issue of the Fraggle Rock comic book (check out our review here!), and today we’re moving things right along as we sit down with writer Bryce P. Coleman and artist Michael DiMotta, the guys we can blame for the short story about the Gorgs in the very same issue. Who knows what crazy interviews we’ll have next?! Besides me. And probably most people at Archaia. And Managing Editor Tim Beedle. Oh… whoops.

Will Bryce and Michael have any particularly insightful musings on the ins and outs of Fraggle culture? There’s only one way to find out, folks! Read on! 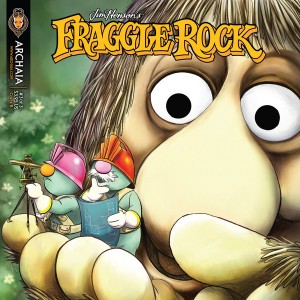 Bryce P. Coleman: Heh…okay, I?¢‚Ç¨‚Ñ¢m gonna age myself here, but I became a fan of Fraggle Rock when it first appeared on HBO in?¢‚Ç¨¬¶when was it? 1982, right? I?¢‚Ç¨‚Ñ¢d always been a huge ?¢‚Ç¨?ìMuppet Show?¢‚Ç¨¬ù fan, so another show from the amazing Jim Henson was more than welcome. As far what form my fandom takes today… I guess you could say I?¢‚Ç¨‚Ñ¢m a bit of a lapsed Fraggleite. But it was so much fun revisiting the series, and I?¢‚Ç¨‚Ñ¢m so glad that they?¢‚Ç¨‚Ñ¢re reviving the property!

BPC: All I can say is, ?¢‚Ç¨?ìThank goodness for Netflix!?¢‚Ç¨¬ù I rewatched most of the first two seasons, and just kept my mind open for story possibilities. I was also listening very closely to the individual voices of the characters, something I really wanted to incorporate into my script.

BPC: My very good friend, and former co-worker, Tim Beedle (who?¢‚Ç¨‚Ñ¢s the editor on the series) kindly offered to let me pitch him and Henson some ideas. I shot him two or three ideas, he picked one that he thought had the most potential, we spent a bit of time refining it (Tim?¢‚Ç¨‚Ñ¢s notes and suggestions were invaluable), then we pitched it to the good folks at The Jim Henson Company and luckily for me, they dug it. Thanks, Tim!

TP: Your writing background is mostly in editing for manga graphic novels. How did you make the jump from editor to writer? And how specifically does the manga world prepare you for writing for Fraggles?

BPC: Well, I?¢‚Ç¨‚Ñ¢d been writing long before I was an editor. My degree?¢‚Ç¨‚Ñ¢s in Narrative Writing, so it?¢‚Ç¨‚Ñ¢s something I?¢‚Ç¨‚Ñ¢ve always done (although no where near as much as I?¢‚Ç¨‚Ñ¢d like). I don?¢‚Ç¨‚Ñ¢t know that editing manga, specifically, prepared me in any way for writing something like a Fraggles story, other than giving me lots and lots of experience in the structure and pacing of storytelling in the graphic novel medium. My main rule of thumb: Don?¢‚Ç¨‚Ñ¢t write so much dialogue in any given panel that there?¢‚Ç¨‚Ñ¢s no room for the art! (Still not sure I succeeded in that entirely.) 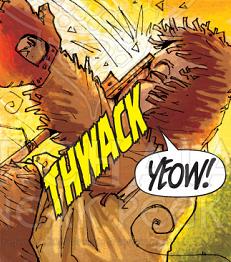 BPC: Oh, the Gorgs are my favorite characters, without a doubt. That?¢‚Ç¨‚Ñ¢s why I zeroed in on Junior. I love the designs, and as characters, I always found myself wanting to know more about them. My least favorite…? Hey, I ain?¢‚Ç¨‚Ñ¢t gonna trash talk here. You think I?¢‚Ç¨‚Ñ¢m crazy?

BPC: My story was so short that there wasn?¢‚Ç¨‚Ñ¢t room for many characters as it was, but of the Gorgs, I found myself on less than sure footing when it came to writing Ma (the Queen of the Universe). Her voice wasn?¢‚Ç¨‚Ñ¢t coming as easily as, say, Pa, whose dialogue I could write all day long.

BPC: Incredibly supportive and gracious. They had some excellent notes on my first draft, which were very helpful, but right from the initial pitch, they had very kind words and gave tons of encouragement. I?¢‚Ç¨‚Ñ¢ve worked with Henson on some other projects as an editor, and they?¢‚Ç¨‚Ñ¢re good folks, no doubt about it.

TP: If you were a Gorg, what would you do with a Fraggle once you caught it?

BPC: Well, when you read my story you?¢‚Ç¨‚Ñ¢ll have a pretty good answer to that question, actually.

BPC: Pretty much all of my professionally published work has been in the role of an editor/project manager. But writing this story has reminded me of how much I miss writing comics/fiction, so I?¢‚Ç¨‚Ñ¢m determined to keep the ball rollin?¢‚Ç¨‚Ñ¢! I?¢‚Ç¨‚Ñ¢ve got a few ideas I want to pitch around, so who knows…?

BPC: Simply to say, thank you all so much for your support of the entire series. Jim Henson?¢‚Ç¨‚Ñ¢s message with the original show was one of tolerance and understanding, in a very non-ironic and pure form. Something you don?¢‚Ç¨‚Ñ¢t see much of anymore in entertainment, but for me, is sorely missed. Oh, and I hope you like my little Gorg story. Thanks for reading! 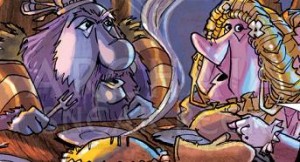 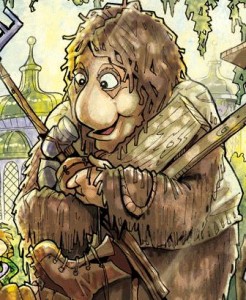 TP: How did you first become a Fraggle Rock fan? And what form does your fandom take today?

Michael DiMotta: I became a Fraggle Rock fan when I was really young. I remember watching it with my older brother and clapping a lot. I still can?¢‚Ç¨‚Ñ¢t help but clap when the opening song starts.

MD: Fraggle Rock sort of just popped back into my life. My new roommate here in Portland (Rosecity rollergirl, Layla Smackdown) happened to own the whole first season, which I watched all the way through in about a week.

MD: A small world, actually. I don?¢‚Ç¨‚Ñ¢t have cable, so I tend to watch full seasons of shows on DVD while I work on projects. So it came as a big surprise while watching season one of Fraggle Rock when my friend and writer, Joshua Williamson, let me know he was was writing a pitch for a new Fraggle Rock Comic. Josh suggested I do some sample drawings and he would pass them along to his contact at Henson and Archaia, editor Tim Beedle.

TP: This isn?¢‚Ç¨‚Ñ¢t your first foray into licensed characters, having created fan art for properties like DC Comics and TMNT. How did you change your approach for creating art for an existing non-superhero project like this?

MD: It wasn?¢‚Ç¨‚Ñ¢t too far of a stretch for me, while I really love action and hero art, I also have a soft place for children?¢‚Ç¨‚Ñ¢s books, too. It was really natural to shift to the light-hearted and colorful world of Fraggle Rock. Who wouldn?¢‚Ç¨‚Ñ¢t want to draw Fraggles all day?

MD: Hmm, that?¢‚Ç¨‚Ñ¢s a tough question because I really love a lot of the characters in Fraggle Rock. I really enjoy the juxtaposition of size within the characters! I love the giant Gorgs chasing tiny Fraggles, and don?¢‚Ç¨‚Ñ¢t even get me started with the adorable teeny, tiny Doozers. If I had to choose a favorite character, it would be Mokey. I like that she?¢‚Ç¨‚Ñ¢s an artist, and her blue-ish hair. My least favorite? Eh, Gobo. Sorry Gobo, you don?¢‚Ç¨‚Ñ¢t do it for me.

MD: Oh, well I?¢‚Ç¨‚Ñ¢ve only had an opportunity to draw stories for Fraggle Rock, not write them, but if I were asked who was the most difficult to draw? I think that Junior Gorg would have to be the most challenging. Something about the way his face is structured, it needs to be drawn just right or it?¢‚Ç¨‚Ñ¢s hit or miss. So you must imagine the irony?¢‚Ç¨‚Äùthe story I was chosen to draw featured Junior in almost EVERY panel. Good thing I?¢‚Ç¨‚Ñ¢m not one to back down from a challenge. 🙂 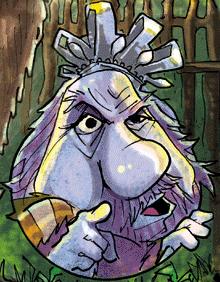 MD: Working with Henson and Archaia has been nothing but a pleasure. They treated new talent with respect and their feedback is honest and helpful, and they gave me a lot of freedom to have fun as long as the characters don?¢‚Ç¨‚Ñ¢t stray too far from Model. I look forward to more opportunities to work with them.

MD: The story I illustrated was written by the talented Bryce Coleman, and basically dives a little deeper into the famous question, ?¢‚Ç¨?ìWhy do Gorgs chase Fwaggles??¢‚Ç¨¬ù You have to support a great industry and buy the book to find out. 🙂

TP: Truthfully, do you think the Gorgs are a menace to Fraggle-kind? Or are they just misunderstood giants?

MD: I don?¢‚Ç¨‚Ñ¢t think Gorgs are that bad when you compare them to some truly evil menaces out there. Besides, it?¢‚Ç¨‚Ñ¢s funny that no one ever asks whether Fraggles are the real menaces or not. After all, they are constantly stealing the Gorgs?¢‚Ç¨‚Ñ¢ precious radishes, which Gorgs need to stop from disappearing.

MD: Mostly through my website: www.michaeldimotta.com?¢‚Ç¨‚Äùthough it?¢‚Ç¨‚Ñ¢s in bad need of an update.

I also sell lots of my own self-published books at small press conventions around the country, such as Stumptown in Portland and MoCCa in New York. As a freelance illustrator, I?¢‚Ç¨‚Ñ¢m always looking for fun new projects to work on with new people and companies. Over the years, I?¢‚Ç¨‚Ñ¢ve taken on a wide range of very diverse projects during my career, so my work tends to pop up all over the place. You gotta keep an eye out for it, kind of like Waldo. 🙂

MD: Just a full-hearted thank you for the love and support, and I hope you enjoy your time with this newest set of adventures down at Fraggle Rock. (clap clap)

Many thanks to Bryce and Michael! Be sure to head back here for more Fraggle Rock Q&As later this week!

Click here to discuss the finer points of radish farming on the ToughPigs forum!