When last we spoke, the writers and artists of the Convincing John and Uncle Traveling Matt chapters of Fraggle Rock #2 were introducing themselves and telling their stories to the Fraggle fans of the world. And with two-thirds of the latest issue already covered, there’s only one thing left to accomplish: The third third.

To close out My 2nd Week with Fraggle Comics, we’ve got writer Leigh Dragoon and illustrator Jake Myler, the creative team behind the lead story of the issue, which features the Fraggle Five up against the unrelenting terror of a kitty in the Rock! Oh but what will Gobo and Company do?? There’s only one way to find out, and that’s to buy Fraggle Rock #2, in stores right now!

And now let’s turn it over to Leigh and Jake for a few A’s to our Q’s! 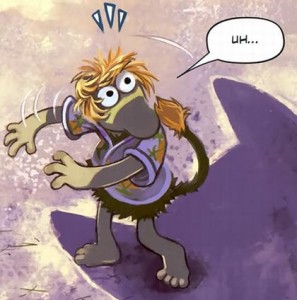 Leigh Dragoon: I remember watching Fraggle Rock when I was a kid. I loved most of the Henson productions I grew up watching, and I remember liking Gobo quite a bit. The episode where the Fraggles share each others?¢‚Ç¨‚Ñ¢ dreams also made a big impact on me. Sadly, I don?¢‚Ç¨‚Ñ¢t think I was able to watch as much of the show as I would have liked?¢‚Ç¨‚ÄùI grew up in a pretty out of the way part of the country, and our TV only got three or four channels, so the programming was limited at times. One of the things I?¢‚Ç¨‚Ñ¢ve appreciated most about the Fraggle Rock writing gig is having the chance to reconnect with the characters and finally watch all the episodes. I?¢‚Ç¨‚Ñ¢ve been pleasantly surprised at how well the show holds up over time, and how naunced the writing is.

LD: Luckily, Netflix had just placed the entire series run into its ?¢‚Ç¨?ìWatch Instantly?¢‚Ç¨¬ù directory. So, for my research, I pretty much sat down and watched the entire series. I think I watched something like 15-20 hours of Fraggle Rock in one week. I had the theme song stuck in my head for a long time afterwards!

LD: I had worked as a writer with Tim Beedle on a previous Tokyopop/Harper Collins project, The Faerie Path. He recommended that I pitch for the Fraggle Rock comic series. I?¢‚Ç¨‚Ñ¢m definitely glad I did!

TP: Looking at your website, it seems like you also have a talent for illustration. Was it difficult to write a story without providing the art as well? Jake Myler?¢‚Ç¨‚Ñ¢s illustrations aside, would you have liked to illustrate the story yourself?

LD: I?¢‚Ç¨‚Ñ¢m actually so glad someone else got to do all the drawing! I love drawing, but it was nerve-wracking enough writing the Fraggle Rock story. I think I?¢‚Ç¨‚Ñ¢d have probably collapsed if I?¢‚Ç¨‚Ñ¢d had to be responsible for the art, as well. Jake?¢‚Ç¨‚Ñ¢s work is so beautiful, I?¢‚Ç¨‚Ñ¢m not sure I could have done better, anyway. I really love his style. He does a great job giving the characters weight and presence.

LD: I like Mokey and Red quite a bit. What surprised me when I began rewatching the series is how much I ended up liking Wembley. I can definitely empathize with his ?¢‚Ç¨?ìWembling,?¢‚Ç¨¬ù and when he decides to take a stand on an issue no one can shake him. I do think that I identify a little too closely with Boober?¢‚Ç¨‚Ñ¢s endless worrying and Gobo?¢‚Ç¨‚Ñ¢s pig-headedness to like them the most. Those two characters just cut a little too close to home. 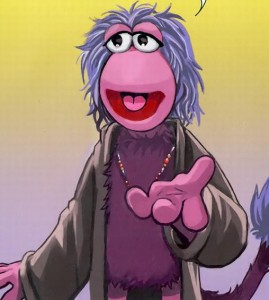 LD: They were all about the same difficulty level. I think the thing I worked on the hardest was doing my best to make sure the characters sounded like themselves. They each have very distinct ways of talking, and I did my best to capture that.

LD: So far I?¢‚Ç¨‚Ñ¢ve only received positive feedback from them. Everyone involved, especially at Archaia, has been very easy to work with. The constructive criticism I received over the different drafts of the script was invaluable. I feel I learned a lot during the process?¢‚Ç¨‚Äùit was a very positive experience.

TP: If you could write a story about the Fraggles in any other location outside of the Rock, where might you take them?

LD: I?¢‚Ç¨‚Ñ¢ll have to think about that! I?¢‚Ç¨‚Ñ¢m not sure. I?¢‚Ç¨‚Ñ¢ll admit, I love the Rock. It?¢‚Ç¨‚Ñ¢s such a well-realized environment and it just entrances me. I think setting is something Henson excelled at. The worlds presented in The Dark Crystal, Fraggle Rock and Labyrinth continue to blow me away. If I had to take the Fraggles out into the real world?¢‚Ç¨¬¶ hmm?¢‚Ç¨¬¶ maybe the Grand Canyon. That would definitely be the opposite of the Rock!

LD: Let?¢‚Ç¨‚Ñ¢s just say I decided to put all the abuse I?¢‚Ç¨‚Ñ¢ve suffered at the paws of various foster animals to good use as inspirational material.

LD: Probably the best place is my website at http://www.leighdragoon.com/. I try to keep people up to date on what I?¢‚Ç¨‚Ñ¢m working on.

LD: Yes! Buy the issue with my story in it! Hah! I kid, I kid. Dance your cares away! Let the Fraggles play! Down in Fraggle Rock! (I told you I had that song stuck in my head) 😉 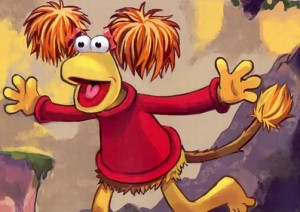 Jake Myler: Fraggle Rock has always been one of those shows that no matter what age in my life I watched it in, it?¢‚Ç¨‚Ñ¢s always entertaining! When I was pretty young someone had a Betamax tape of Fraggle Rock and I was hooked. Today, I really hope to put all my love for this great show into the Fraggle Rock comic. I was really happy that I was given something where I could draw kind of a thank you letter to Henson.

TP: What sort of research did you do in preparation to draw Fraggles?

JM: I had to reacquaint myself with how all the characters looked, so I watched a bunch of episodes. But I watched them on mute so I could try to focus on the Fraggles and what they look like, without getting too distracted by the story. Whenever I watched it with sound I got too sucked into it, and hours would go by!

JM: I?¢‚Ç¨‚Ñ¢ve worked with a few of the editors at Archaia in the past when I was drawing for TokyoPop. So when they were putting together a list of artists for the project, my name came up, and of course I jumped at the chance. I was dancing around all day when I got an email from my editor Tim about working on a Henson property.

TP: You illustrated the ?¢‚Ç¨?ìBoober the Doozer?¢‚Ç¨¬ù story in the Free Comic Book Day issue, as well as several covers. How does it feel to possibly be the most visible Fraggle Rock artist right now?

JM: It makes me very proud that so many people are going to be able to see something I drew! But perhaps more than that, I like that I?¢‚Ç¨‚Ñ¢m going to be among a lot of really talented artists working on the series.

TP: What has the general reaction been to your work in the Free Comic Book Day issue?

JM: I think it was pretty positive. I did a signing over at Zanadu Comics in Seattle where I live, and we were out of books a mere half hour after I sat down (and they had ordered quite a lot). So that seemed to me like a pretty good sign that people are loving the return of Fraggle Rock and hopefully my work on the book added something. I?¢‚Ç¨‚Ñ¢m pretty sure that the other fantastic artists in the Free Comic Book Day Book, such as Katie Cook, Jeremy Love, and the writers Nichol Ashworth and Sam Humphries, not to mention the amazing work by David Petersen of Mouse Guard, made for a pretty strong book that was hard to pass up! 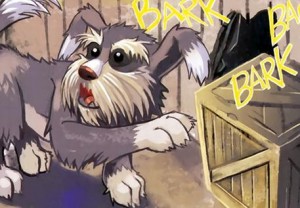 JM: The Fraggle I love best is poor ol?¢‚Ç¨‚Ñ¢ Boober. He works hard, likes peace and quiet, is scared of almost everything, and sometimes has an alternate personality that takes physical shape. Seems like a lot of issues to work through, but they always make for a good story. It?¢‚Ç¨‚Ñ¢s harder to pick a character I dislike, but maybe it?¢‚Ç¨‚Ñ¢s the Trash-heap, because she used to scare me as a kid. I had a trash heap of my own that I had to throw compost into out in the woods. I wasn?¢‚Ç¨‚Ñ¢t going to be happy if my trash heap started singing to me!

TP: Which characters have been the most difficult to draw?

JM: Wembly turned out to be a difficult character, because I had to keep track of all those banana trees on his shirt and make sure they didn?¢‚Ç¨‚Ñ¢t change size from panel to panel!

JM: I think both companies were happy with my take on the Fraggles. When it came time for Archaia and Henson to approve pages, there were never too many changes that needed to be made. So that always seems to me like a sign that I?¢‚Ç¨‚Ñ¢m doing things right.

TP: If Boober likes laundry so much, why do you think he only ever wears a hat and scarf?

It is kind of funny though, for someone who does laundry all day; his scarf is pretty dingy at the ends!

JM: ?¢‚Ç¨?ìBoober the Doozer,?¢‚Ç¨¬ù my Free Comic Book Day story, was more introspective, exploring Boober?¢‚Ç¨‚Ñ¢s identity. The story in issue #2 has a lot more action and lots more terrifying situations! Although maybe Boober?¢‚Ç¨‚Ñ¢s the only one who?¢‚Ç¨‚Ñ¢s frightened. Leigh Dragoon did a great job writing how Wembley, Red, Gobo, Mokey and Boober react and it all seems true to the show.

JM: I have a graphic novel, Undertown, which was published back in 2007. It?¢‚Ç¨‚Ñ¢s harder to find now but still available at stores like Amazon. Also, I?¢‚Ç¨‚Ñ¢m hard at work on the next arc of Finding Nemo comics, published by Boom! Studios, that should be appearing in stores midsummer.

JM: Only that it?¢‚Ç¨‚Ñ¢s a really great time to be a fan of Fraggle Rock , and I?¢‚Ç¨‚Ñ¢m glad to have contributed something to the Fraggleverse. (If Fraggleverse isn?¢‚Ç¨‚Ñ¢t a term, it should be!)

Many thanks to Leigh Dragoon and Jake Myler for agreeing to chat with us!

Click here to chase your own tail on the ToughPigs forum!