If you’re a dedicated reader of ToughPigs, you might recognize the name Katie Cook. We first discovered her Fraggle Rock fan art on her website, and now she gets to draw Fraggles for a living! We should all be so lucky! Though we’ve got plenty of luck, since we’ve got a Fraggle fan like Katie working on one of our favorite properties. Let’s see what she has to say on the subject…

ToughPigs: How did you first become a Muppet fan? And what form does your fandom take today?

Katie Cook: I’ve been a Muppet fan for as long as i can remember! I’ve always been obsessed with them…. I started watching the Muppet Show in syndication when i was really young, that, combined with Sesame Street and Fraggles meant I was hooked for life.

Today, my fandom brings new levels to the term “nerd”. I study the Muppets (from the art of building them to the writing!) and I take a lot of artistic inspiration from them. I love popping in anything Henson to help inspire me for the day! I also collect anything and everything Henson as well as build my own puppets!

TP: What is it about Fraggle Rock that lends itself to your artistic style?

KC: I’ve gone back into my DVD boxed set and rewatched every episode. it was torture 😉 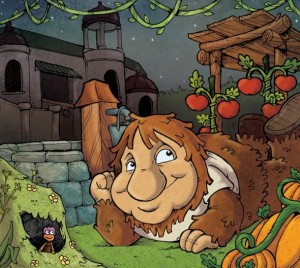 KC: I love Junior Gorg. he’s so adorable, I really just want to give him a big hug. I also love Mokey, as I related to her the most growing up (and, as an adult now… I try and keep that same laid-back attitude that she has!)

TP: Which characters have been the most difficult to write for? To illustrate?

KC: I think that they can all be difficult to write for. All the characters have such great, unique personalities that you don’t want to lose that.

And i don’t really consider any of them difficult to draw… it’s the most fun drawing I’ve had in a LONG time!

TP: Do you have a dream Muppet or Fraggle project that you?¢‚Ç¨‚Ñ¢d like to work on? (Aside from the one you?¢‚Ç¨‚Ñ¢re currently doing, of course.)

KC: I have a couple ideas for a Muppet comic mini-series that I’d love to draw and write eventually. they’re some of the funniest things I’ve ever come up with and I’d love to share them with the comic world! I’d also revel in the chance for more Fraggle comic goodness and I’d LOVE to do some kids’ book illustrations based on Fraggles… like the ones I had as a kid! 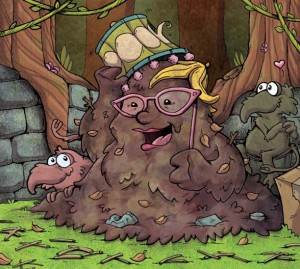 TP: You are both writing and illustrating your Fraggle Rock comic story. Is this your first writing commission? How did you prepare for it?

KC: It is the first professional writing gig I’ve really ever had. I’ve written things before, but those have always been personal projects. It was really fun to write for something that I love so much… and because I love it and know the universe so well, writing came easy!

KC: Archaia has been wonderful… working with Tim Beetle has been great! And I think they’re putting just as much love into this property as Henson itself, which, as a fan, is really exciting to be a part of. And the response has been great. Trust me, you can’t even imagine how exciting it is for me to have “notes back from Henson” about my work!

KC: Well, Ewoks are vicious little buggers who would eat every Fraggle in sight, Wampas are terrifying beasts who will tear out your entrails… (I can envision Junior cowering in a snowy corner with his rake held over his head for protection as a Wampa bears down on him) and Yoda is a Jedi. I love all the Fraggle characters, but I’m not going to lie to myself and say they’d win in any kind of fight 😉 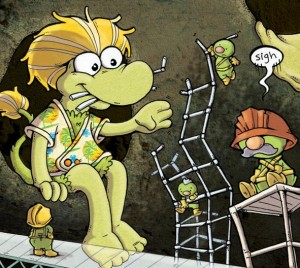 KC: It’s a fun little story that I really think is true to the characters. There’s also a very nerdy little bonus thrown in the corner of one of the panels… and a Star Wars reference.

TP: What is coming up next from Katie Cook?

KC: Anything and everything. Check out my site/blog to learn all about it! www.katiecandraw.com

TP: Lastly, do you have a message you?¢‚Ç¨‚Ñ¢d like to pass along to the fans?

KC: I’m amazed that I’m being allowed to play in a world that I’ve loved since childhood and used to only HOPE that one day I could be even a small part of it. So, in the words of the man himself, “My hope is to leave the world a bit better than when I got here”. I can only hope that whatever brief touches i leave on the Fraggle ‘verse leave it a little more adorable than it was before. (Which will be hard, as it’s already so awesome.) 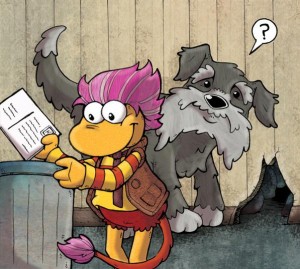 Many thanks to Katie Cook for joining us on this Q&A!

And thank you for joining us on My Week with Fraggle Rock Comics! Keep on heading back to ToughPigs.com for all the latest in Fraggle news!

Click here to sample a Doozer stick on the ToughPigs forum!