The following article was written by Staci Rosen. Thanks for your hard work, Staci! 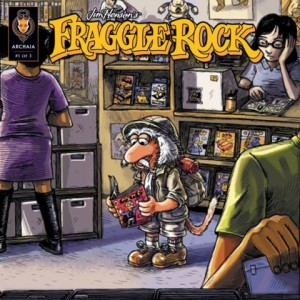 The New York Comic Con is this weekend, and as we usually hope when 13 different types of popular culture collide in one convention center, there’s plenty of Muppet-related things to do, people to meet, and panels to attend.

And because we’re of the obsessive nature and love making lists, we’ve got a handy dandy guide to NYCC for all you Muppet nerds out there in the tri-state area.  Read on for a (mostly) comprehensive list of Muppet, Sesame, and Henson-related panels, signings, and superfuntimes!

On Saturday at 9pm, Caroll Spinney will be sitting on a panel honoring movie poster artist Drew Struzan, who illustrated the iconic Muppet Movie, Great Muppet Caper, Muppet Christmas Carol, and Muppet Treasure Island posters, as well as dozens of additional Muppet artwork.  They’ll be screening portions of the upcoming documentary “Drew: The Man Behind the Poster”, and while I’m not exactly sure why Caroll Spinney will be on stage for this, I’m just glad we have another excuse to hear him speak.

On Sunday at 3:45pm, The Jim Henson Company and Archaia Comics will be holding a joint panel, screening some of Jim’s early works and rare footage.  Jim Henson Company archivist Karen Falk will be on hand to present the videos, and “Tale of Sand” artist Ramón Pérez will be discussing the upcoming comic book based on Jim Henson and Jerry Juhl’s script.

As a special surprise, Eric Jacobson (Miss Piggy, Fozzie Bear, Grover, Bert, Animal, etc etc etc) will be appearing at Comic Con signing some autographs for his adoring fans.  He’ll be stationed at the welovefine.com booth (#2013) on Saturday from 12-1pm and 3-4pm.  Welovefine.com will also be selling and giving away lots of Sesame Street and Muppet t-shirts and apparel, and they’ll also have an Oscar the Grouch photo puppet for all your photo op needs!

Also at the Welovefine.com booth will be Sesame Street artist Evan Cheng, whose art we’ve spotlighted here on ToughPigs.  Evan will be sketching from 2-4pm on Friday. 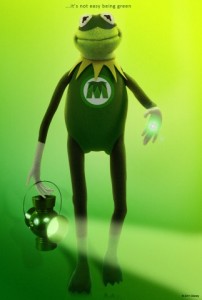 The Archaia booth will also be hosting a ton of Henson-related signings all weekend, with writers and artists from the Fraggle Rock comics and the upcoming Tale of Sand and The Storyteller comics, including David Petersen, Katie Cook, Grace Randolph and more!  Here’s the full list of creators you might be interested in (and click here for the signing schedule):

There will also be some awesome Muppet people at Artists’ Alley, including Katie Cook (table B18), Amy Mebberson (table L4), and James Silvani (also table L4).  Be sure to stop by their tables and buy a sketch or two! 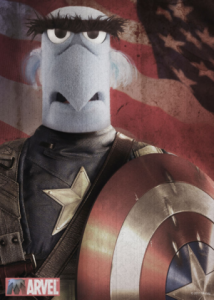 Another panel that may be of interest is the Disney/Marvel Kids panel on Sunday at 12pm.  Since Marvel currently holds the license to the Muppet comics, there’s a slight chance there will be an announcement about their future.  (Though I wouldn’t be optimistic since they announced at the San Diego Comic Con that they had no plans to do much of anything with the Muppets.  But these panels tend to come with Q&A sessions, and they do pay attention to audience reaction, so maybe a few fans will call Marvel out on their lack of Muppety ambition and the crowd will erupt with cheers and applause so deafening that they’ll have no choice but to get the Muppet comics back on the shelves.  Hey, anything can happen at Comic Con!

Aside from all the panels and celebrities and whatnot, Comic Con is also a hive for some amazing cosplaying.  There’s a not-terrible chance that some folks out there, tired of dressing as yet another Spider-Man or Batgirl, will choose a costume of a more Muppety variety.  And who knows, one of those cosplayers might be Justin Timberlake in disguise!

The most exciting celebrities to look out for at Comic Con, of course, are your pals from ToughPigs!  Joe and Ryan will be walking the floor and attending panels all three days, possibly wearing costumes or Muppety t-shirts as we blend in with the nerdiness of the crowd.  If you spot us, we’d love it if you stopped by to say hello!  Because as exciting as it’ll be to meet any of the people we mentioned earlier in this article, it’s always more satisfying to meet fellow Muppet fans.  (Need a reminder as to what Joe and Ryan look like?  Why not revisit our Ask ToughPigs videos?!) 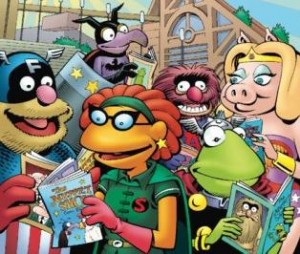 Click here to declare this a job for Wonder Pig on the ToughPigs forum!