Yes I know, we’re totally stretching the definition of “My Week” by extending it beyond the normal concept of seven days. But it’s all worth it to bring even more Q&As with the Fraggle Rock comic book writers and artists!

Today, we’re chatting with writer Jason M. Burns and illustrator Chandra Free, the talent behind the story, “The Fraggle Who Cried Monster” from the latest issue. Check out these awesome words that they had to say: 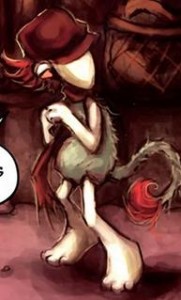 Jason M. Burns: Growing up, I was a huge Muppets fan, so when my family got HBO, Fraggle Rock became an instant offshoot of that original fandom. There was no limit to the amount of imagination you could see in any given episode, which for a kid, is gold. Today, I remain a fan of all things Henson.

TP: What sort of research did you do in preparation to write for the Fraggle Rock universe?

JMB: I went back and revisited old episodes. I hadn?¢‚Ç¨‚Ñ¢t seen the show in quite awhile, so it was like sitting down with old friends you hadn?¢‚Ç¨‚Ñ¢t talked to in awhile. Everything started rolling back, and ultimately, it was the most fun I have had ?¢‚Ç¨?ìworking?¢‚Ç¨¬ù in quite awhile.

JMB: The Henson folks reached out to me after reading some of my previous published works and asked me to pitch on the series. Being a huge Henson fan in general, that was a pretty awesome day.

TP: You?¢‚Ç¨‚Ñ¢ve written for properties such as Shrek, Megamind, and Child?¢‚Ç¨‚Ñ¢s Play. How did your experience writing for Fraggle Rock differ from those franchises? 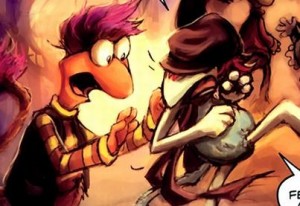 JMB: Every licensor has a different process of handling their characters, so each one can take on a much different vibe. I think with Fraggle, I was the most nervous I have been in working with a licensor because they had reached out to be directly, and there was a lot of pressure to live up to because I was such a fan of these characters growing up. Self-imposed creative fear was probably what set this apart from other licensed works.

JMB: Boober was my favorite, which is why I was psyched that my pitch with him as the lead was accepted. My least favorite?¢‚Ç¨¬¶ I?¢‚Ç¨‚Ñ¢d have to go with the Gorgs. I?¢‚Ç¨‚Ñ¢m not sure why, but I never connected with them as a kid.

TP: Which characters have been the most difficult to write for?

JMB: The lesser known character I used in the story was probably the toughest to write, because so little existed with him/her previously. 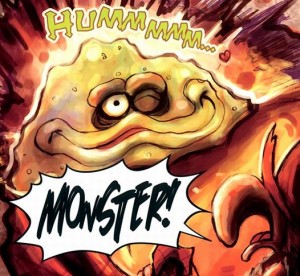 JMB: They seemed to enjoy the story. I involved a character who appeared in only one episode of the television series, so I think they liked that aspect of it. I guess I?¢‚Ç¨‚Ñ¢ll know for certain if they liked it based on whether or not I ever get asked back. Haha

JMB: There are monsters. Lots and lots of monsters! Or are there?

TP: At the risk of revealing spoilers, you bring back a one-off character from the Fraggle Rock TV show in your story. Do you have any other favorite characters that you?¢‚Ç¨‚Ñ¢d like to see represented in the comics?

JMB: The Ditzies would be fun to explore. I always like the secondary characters, because most of the times, you?¢‚Ç¨‚Ñ¢re limited in what you learn about them in the original work. Comics in particularly really enable fans a deeper look inside their favorite properties where they can peel back the curtain a little further.

JMB: They can check out my recent work on Megamind and Pocket God with Ape Entertainment, as well as upcoming releases Kung Fu Panda and Richie Rich with Ape, Jericho over at IDW, and I?¢‚Ç¨‚Ñ¢m bringing back my creator-owned series A Dummy?¢‚Ç¨‚Ñ¢s Guide to Danger with Viper Comics later this year, which, involves a puppet, so Henson fans will love it! Also, zombie fans can check in at my website (www.jasonmburns.com) for my ongoing zombie novel, FriendZ & Loved OneZ, with corresponding zombie art.

JMB: Buy the book and relive your Fraggle love! 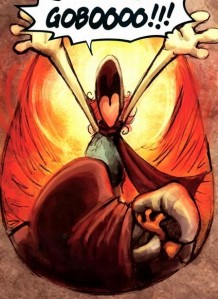 Chandra Free: It was the early ?¢‚Ç¨‚Ñ¢80s; I was a wee little thing (before I could remember what age I was), sitting in front of the big RCA tube, watching the fairly new cable thing. We had the HB of O and Fraggles was on its original run in the States. My cousin, Lindsay Cibos (another artist on the upcoming Fraggle Rock Vol. 2, issue 3), and I would watch the Fraggles together when she was over on the weekends. I was a big fan of Mokey, Boober, Philo & Gunge, and disliked the Gorgs a great deal. I probably ended up watching Fraggles later on in my pre-teen days when The Disney Channel picked it up.

As for today?¢‚Ç¨‚ÄùI?¢‚Ç¨‚Ñ¢d say that all Henson properties have affected my work. Like anything you grow up with, it sticks with you. There?¢‚Ç¨‚Ñ¢s a lot influence buried in my drawings from the Muppets. My art has big heads that flap open and the occasional mitt-like hands. Heck, I make a reference to a certain trashy green dude in THE GOD MACHINE!

Also, I think Henson also taught me that not all monsters are evil. They can be lovable!

CF: I borrowed the whole Fraggle DVD series from my friend Jared. A little refresher was in order. So I watched select episodes and had them playing while I was working on the thumbnails. I also used the Muppet Wiki to research various creatures when designing the monsters for ?¢‚Ç¨?ìThe Fraggle Who Cried Monster!?¢‚Ç¨¬ù I also borrowed The Muppet Show DVDs as well to examine what they did for the big monster guys on that show. 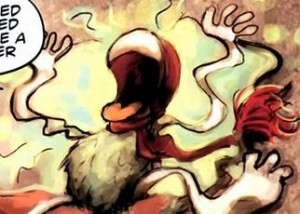 CF: Well, I have a book with Archaia, my own title I wrote and drew, THE GOD MACHINE, so I was already in touch with Stephen Christy (Editor-in-Chief of Archaia). I expressed my love and my interest in being a part of the Henson projects that were coming down the pipeline for Archaia.

Initially I was pitching with A. Dave Lewis (writer on LONE AND LEVEL SANDS) for a Philo and Gunge story. Sadly, the script was declined, which was a big bummer since I love Philo and Gunge so much. The script was fantastically hilarious, and I had looked forward to working with Dave on a project for some time now.

I was happy that Tim Beedle found another story for me to work on in the long run. I had such a blast! Though I still hope that there will be more Fraggles in the future and they bring me in for a Philo and Gunge story?¢‚Ç¨¬¶ *hint*hint*

TP: Your artistic style has a wonderful mix of the beautiful and the creepy. How do you think that balance relates to the world of Fraggle Rock?

CF: To me, there was and still is this strange quirky dark vibe throughout Fraggles. It was a show that wasn?¢‚Ç¨‚Ñ¢t afraid to actually get weird and spooky?¢‚Ç¨¬¶ let alone let its characters get existential and ponder their living life and their death (who didn?¢‚Ç¨‚Ñ¢t cry when Red and Boober were trapped in the cave?) That?¢‚Ç¨‚Ñ¢s serious stuff right there. Which, I think, there?¢‚Ç¨‚Ñ¢s a lot of that ?¢‚Ç¨?ìunknown?¢‚Ç¨¬ù scary factor in the Fraggle word that makes you feel uncomfortable, but also has that carefree laissez-faire attitude seeping through, too. The Fraggles themselves have that weird mix of happy altruistic ideas, and cynicism. I wanted to reflect a lot of that vibrancy and darkness of the characters and their world in my art ?¢‚Ç¨‚Äú granted I already do a lot of that in my regular work, but I wanted to make sure things were not too dark, or the monsters too spooky. I wanted to remain true to the source material, because I knew that not only did that mean something to me, but that fans would care, too.

CF: Philo and Gunge! They?¢‚Ç¨‚Ñ¢re amazing trash-rat things. They have that snarkiness and wittiness to them that I just adore. They?¢‚Ç¨‚Ñ¢re very much essential Henson characters, much like the theater duo of Statler and Waldorf! How can you not have a pair of wise-crackers in a Henson show?

My least liked characters are the Gorgs. They never have jibed with me at all, especially Junior. 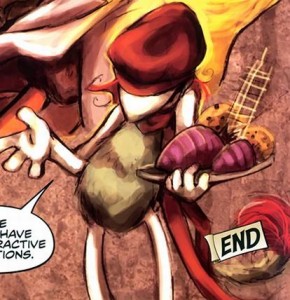 CF: All of the Fraggles were difficult to tackle at first. But it?¢‚Ç¨‚Ñ¢s always hard to adapt puppets who rely on full body movement, flapping mouths, and non-moving eyes. You want to be true to the life the puppeteers brought to them, how you remember them, and translate that into a cartoony sort of style. It?¢‚Ç¨‚Ñ¢s even harder when you?¢‚Ç¨‚Ñ¢re trying to stay close to model AND make them your own too.

CF: Tim Beedle, our fantastic editor on the project and go-between for Henson, has been an absolute joy to work with. His response to my work and any concerns I had were always impeccable. He understood what I was trying to accomplish with my work, always supportive of my choices, and helpful with constructive feedback. I couldn?¢‚Ç¨‚Ñ¢t ask for a better editor.

CF: Creepy creeps, and wily what-cha-ma-call-its! Not to mention a surprise, rarely seen character from the series!

TP: Pop quiz: If you found yourself in Fraggle Rock and encountered a monster, what would you do?

CF: Currently my first graphic novel, THE GOD MACHINE*, is out and about in the world. It?¢‚Ç¨‚Ñ¢s on sale at most major book chains and comic shops. If your retailer of choice doesn?¢‚Ç¨‚Ñ¢t have it, ask them to order it for you. Also, for latest news on all of my projects, check out my website www.spookychan.com for updates! There?¢‚Ç¨‚Ñ¢s artwork and other things to check out there as well.

*I do have to warn those with younger readers in the family that this is a mature title.

Thanks so much to Jason M. Burns and Chandra Free for chatting with us and for their great work on the Fraggle Rock comic book!

Click here to run and hide with Boober on the ToughPigs forum!