These Fraggle Rock comic book Q&As just keep on rolling in! Today we’re chatting with two of the people who made the Fraggles look so dang pretty: Heidi Arnhold and Ross Campbell.

Now let’s see what these two artisans have to say for themselves! 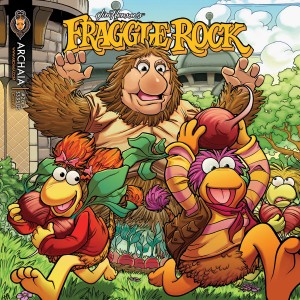 Heidi Arnhold: I regretfully admit that I missed out on Fraggle Rock as a kid. (My peers were dumbfounded when I told them I didn’t know what Fraggles were!) As I understand it, Fraggle Rock originally aired on HBO, and my family only had a few basic channels on TV back then. I feel very fortunate that I at least had Sesame Street to fall in love with. Since my involvement with the project, however, I’ve watched season one of Fraggle Rock often and sincerely wish the show had been a part of my childhood. It grows on me more all the time, and I sometimes catch myself humming songs or talking like Gobo, eh?

HA: Right away I started familiarizing myself by watching a bunch of episodes, and I sent Tim Beedle some preliminary Fraggle illustrations to see if my work would be a good fit for the comic. Once the folks at Henson approved me, Tim and Joe LeFavi provided a bunch of screenshots, and they were very helpful getting me more if I needed extra reference. My season one box set came in handy as well. I know there were a couple times when I sat in front of the TV with the show paused so I could sketch out a particular setting or prop.

HA: I worked with Tim Beedle before on Legends of the Dark Crystal, and he was kind enough to offer me a chance to hop on the Fraggle bandwagon! I was more than happy to oblige. C:

TP: This isn?¢‚Ç¨‚Ñ¢t your first foray into a Henson-owned universe, as you illustrated the Legends of the Dark Crystal comic books. How would you compare the two experiences? 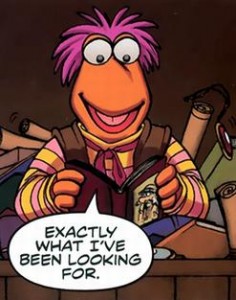 HA: Talk about two contrasting properties, haha. It was nice taking a breather from all those ornate Skeksis outfits and a darker story to embrace the comical, quirky universe of the Fraggles. While I enjoy drawing monsters and moody settings, cutting loose and playing with a more comedic approach was really fun. Fraggle Rock gave me my first opportunity to do that. They do share a similarity in one way: lots and lots of caves/ rock formations! Both of those projects have turned me into a cave drawing machine. I eat caves for breakfast.

HA: I’m notoriously terrible with the favorites game. I connect with Mokey’s sensitive, artsy side and Wembley’s indecisiveness. (My fiance is totally a Wembley, though not because of his decision making!) Boober’s grumpy quips are hilarious and adorable. The dynamic between all of them is so great, and each character is appealing in their own way. In the same vein, I can’t pick a least favorite?¢‚Ç¨¬¶ though I can see how Red might be a little difficult to deal with sometimes. 😛

HA: The silly creatures. Ah, just kiddin’. Okay, I confess I struggled with Junior Gorg on the cover. There’s just something about that face of his! Coloring all the characters was taxing as well; this was the first sequential project I ever fully colored. Artists who do that regularly have my utmost respect. 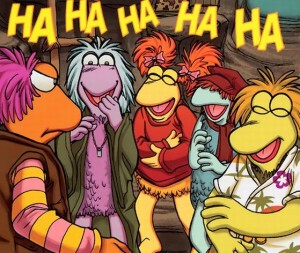 HA: They both have been very complimentary, which makes me bashful.

HA: Fainting spells, panic attacks, creatures in the dark, an overdose of PDA, and strengthened friendship!

TP: Who would you rather get advice from: The Trash Heap or Aughra?

HA: Hah! Good question! Despite being occasionally blunt, Madame Heap always seems to be open to giving advice. She certainly has the Jewish mother thing going for her. Aughra’s just downright surly. I imagine she would lose patience with me before I could fully explain my circumstances to her! So yeah, I think I’m gonna go with Marjory.

HA: Either at www.heidiarnhold.com or www.chibimaryn.deviantart.com. And if you haven’t checked out the Legends of the Dark Crystal books, they’re worth a peek too. C;

HA: There’s still plenty left to explore in the world of the Fraggles, and luckily the right people are taking the reigns. If you’re a fan and want to see more, all you have to do is buy the book, spread the word, and pass it on! 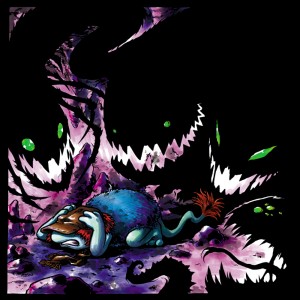 Ross Campbell: I?¢‚Ç¨‚Ñ¢d actually never really seen Fraggle Rock up until this job, I never had cable as a kid! I feel like I have vague memories of catching bits and pieces of the show whenever my family and I would stay at a hotel or something, but that?¢‚Ç¨‚Ñ¢s it. I had to do a bunch of research when I did the initial audition/try-out sketches for Henson to see, so it was a little frazzling but fun. I?¢‚Ç¨‚Ñ¢m familiar with most of Jim Henson?¢‚Ç¨‚Ñ¢s other stuff, but I just never had the opportunity to see Fraggles.

RC: I was given a lot of reference material of the characters so that helped a lot, and Netflix conveniently has a good amount of Fraggle stuff on streaming instant play, so the TV show was just a free button click away. There?¢‚Ç¨‚Ñ¢s also a secret Fraggle style guide website that was really helpful for seeing how other artists drew the Fraggles because they?¢‚Ç¨‚Ñ¢re really hard characters to turn into two-dimensional drawings.

RC: Editor Tim Beedle is a friend of mine so he asked me if I wanted to draw some Fraggles, and I said hell yeah. It was also great getting to take that a step further and actually working with Tim on the story we did.

TP: Looking at your DeviantArt page, it seems that your style tends to go to a thematically darker place. Do you think that helps or hinders your approach to the Fraggle Rock stories?

RC: I?¢‚Ç¨‚Ñ¢m not sure, maybe a little of both. I think at first it was kind of tough, trying to make the character designs work in my style and not make them too weird or unsuitable for the type of material that Fraggle Rock is. But I think it helped because I did that shadow monster Boober cover and people seemed to really dig that, and the story Tim and I did had Mokey being obsessive and neurotic, so I think my usual tendency to do a kind of juxtaposition of intensity and cuteness was a help there. I did have to rein it in a bit in parts?¢‚Ç¨‚Äùinitially I drew Mokey too insane-looking, haha. 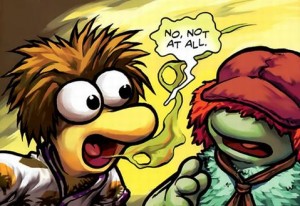 RC: Definitely Mokey, by far. Part of that might seem silly, the reason I gravitated toward her even before I knew what her deal was, is that I like her a lot because of her eyelids. I like the design and how heavy they look, and when I was first drawing the Fraggles I found it was difficult to draw the characters that don?¢‚Ç¨‚Ñ¢t have eyelids, so I immediately gravitated toward Mokey. Besides her personality, which I like the best, I also like her hair and her color scheme.

RC: Speaking of which! Gobo is the one I had the hardest time with, despite him having eyelids, but there?¢‚Ç¨‚Ñ¢s something about his hair I felt like I could never get right and his vest covered in pockets worn over a shirt seemed awkward to me and frustrating to draw. Going back to the eyelids thing, I didn?¢‚Ç¨‚Ñ¢t really think about it when seeing the characters as three-dimensional in the show, because they?¢‚Ç¨‚Ñ¢re moving around and a lot of the expression comes from body language, but when I started drawing them I realized it was really hard to show expression without the eyelids on Red and Wembley, but then if you add eyelids to them to show anger or sadness or whatever, it looks weird and wrong or makes them look like they?¢‚Ç¨‚Ñ¢re stoned or drunk or something. So that was tough to figure out.

RC: They all seemed to really like it, which is great. I actually didn?¢‚Ç¨‚Ñ¢t think I?¢‚Ç¨‚Ñ¢d get past Henson, I was almost sure my renditions wouldn?¢‚Ç¨‚Ñ¢t be good enough or on-model enough so it was a nice surprise to get the job.

RC: It?¢‚Ç¨‚Ñ¢s pretty short so there isn?¢‚Ç¨‚Ñ¢t much to say without telling the whole thing, but it has Mokey freaking out over a poem and driving herself nuts.

TP: Do you share any of Boober?¢‚Ç¨‚Ñ¢s phobias, crippling fears, or nonsensical paranoias?

RC: Nothing crippling, really, and I?¢‚Ç¨‚Ñ¢m definitely not paranoid. I get really freaked out by frogs, snake heads (mainly the type of snake with round pupils, other ones are okay), and pictures of deformed animals, but those are pretty easy to avoid.

RC: Online there?¢‚Ç¨‚Ñ¢s my deviantart gallery at mooncalfe.deviantart.com, my personal website greenoblivion.com, I post a lot of sketches and stuff on my blog at mooncalfe.livejournal.com, I?¢‚Ç¨‚Ñ¢ve just set up a gallery at mooncalfe.artician.com, and my comic Shadoweyes runs online at shadoweyes.net. My printed comics are the bulk of what I do, my series Wet Moon, Shadoweyes, The Abandoned, Water Baby, and a bunch of other stuff, and those can be found or ordered at any bookstore, comic store, and online stores like Amazon.

RC: Nothing really, I guess. I hope everyone likes my Fraggle renditions!

Many thanks to Heidi Arnhold and Ross Campbell for their responses and for all their hard work on the Fraggle Rock comic book!

Click here to search for the Meaning of Life (cereal) on the ToughPigs forum!