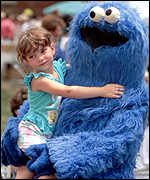 The Halloween Parade rolls on and on, leaving chaos and destruction in its wake. So far, we’ve seen Sesame pumpkins and transvestite pigs, children dressed like bears and dogs dressed like frogs. There can’t be much left that could possibly surprise us.

And out of the darkness, you can hear our cry, rising above the candy and the costumes:

Isn’t there anybody who knows? what Halloween? is all about?

A lone figure steps out from the shadows. Sure, he says. I can tell you what Halloween is all about.

The little boy steps to center stage, and the house lights go down.

And there were in the same country Muppet fans,

abiding in the fields, keeping watch

over their Electric Mayhem websites

And lo, Halloween came upon them,

and fratboys in Oscar the Grouch costumes

shone round about them.

And they were sore afraid.

But the children in Elmo costumes said unto them,

Fear not, for behold, I bring you tidings of great joy,

which shall be to all puppets.

For unto you this day is born a guy in a Beaker costume.

You shall find Muppets at your office Halloween party,

and in college-town bars, and on your own front porch.

And suddenly there was at the doorstep

a multitude of Muppets,

asking for candy, and saying:

It’s time to play the music,

it’s time to light the lights. 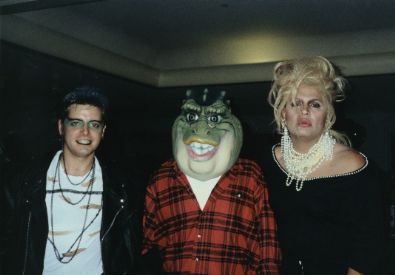 On Halloween, we find the Muppets that abide in our hearts,

and bring them outside, and show them to the world.

— to school, to the office, to the front porch —

yea, wherever you are, there will be Muppets.

And that, Muppet fans, is what Halloween is all about.

Coming soon: The Grand Finale of the Halloween Parade!

Thanks to my trick-or-treatin’ pals:

Travis Frost for the kid in the Bear costume