I was young, okay? And there just isn’t that much for a gay teenager to do in the suburbs. And it did kind of get me my first boyfriend. And I didn’t go every week. And it’s not like I dressed up as Columbia that often. Eat your heart out, Ann Miller!

All of these photos are taken from the website of the Vicarious Theater Company, a group of Rocky Horror fans in Seattle, who are still — frog bless their little tranny hearts — spending every weekend of their precious young lives rockin’ the house like it’s 1979. These fine young cannibals performed two versions of The Rocky Horror Muppet Show in ’98 and ’99, and now I’ve stolen all their pictures. It was great when it all began…

A Wild and an Untamed Thing 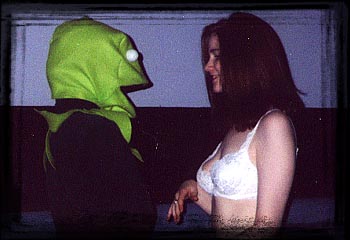 All’s fair in love and warts

It’s not easy having a good time…

spending each day the color of the leaves…

Okay, everyone, gather up your toast and your feather boas, and clear the theater… That concludes our trip to Transsexual Transylvania, land of night and high electric bills. And would you believe I still have more Halloween pictures coming up later this week? I’ve tasted blood and I want more, more, more!