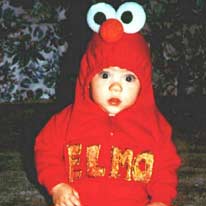 It’s a typical Halloween mistake, really. I thought I’d start this little Halloween Parade thing, and over the month of October I’d probably get a few entries, and it would be all cute and small and probably not set me back very much in the way of candy distribution.

Imagine my surprise when seven trick or treaters show up at my door right off the bat. Either there are a lot of people running around out there wearing Muppet costumes pretty much 24-7, or you guys are hungrier for candy than I thought. But I’m gonna make good on my candy promises, cause I don’t want you kids coming back to throw toilet paper at my house. Keep ’em coming, I can take it.

Now, another thing that surprises me so far is that pretty much every entry has had some kind “This is not a photo of me” disclaimer along with it. Do Muppet fans just not make Muppet costumes? And if not… then who does?

Kicking off the parade today is Emmy Miklasevich, who writes:

“This picture is from the Homecoming Game of my senior year in high school (fall 2000). The theme for that year was Animated Follies, and the seniors had Sesame Street, for some reason. Luckily, I am not in this skit. This picture features Elmo, Big Bird (hidden in the back), and a Cookie Monster that’s just not natural.”

And speaking of unnatural, here’s one from Chris Caines: “This guy isn’t me. No idea who he is. I was searching for pics of Oompa Loompas on the net and came across this guy. I give him an A- for effort on this — I’d give him a solid A if he had taken the time to locate some yellow makeup and covered himself in it. Love the idea of using a conehead ‘wig’.” Oh, me too… this may be the spookiest picture yet.

By the way, here’s a bit more spooky Halloween-type stuff: Chris is affiliated with the fantastic DoomBuggies.com, a website for fans of the Haunted Mansion Ride at Disney World.

It’s a comprehensive, funny and cool-looking site, but it doesn’t really explain why he’s looking for pictures of Oompa Loompas. I’ll look into this matter and get back to you.

Here’s some more pictures sent by people not in the pictures:

(and don’t the rubber duckie and the paper clips

(And, by the way — Note to the Halloween costume manufacturers of the world:

is weird and unsettling, even for children.)

sent by Kristin Krause of 2momluvme.com

The two pictures above were sent in by Chris Smigliano, along with this one — which isn’t technically a Muppet costume, but for a change, it’s actually a picture of Chris!

“I found this old pic of a Halloween costume I made a few years back… This won me a $100 third-place prize at a party, as well as an apearance on a Discovery Channel TV show called Travelers. Meet the Six Foot Headless Mad Scientist!

“The arm holding the ‘head’ is a fake, made out of a stiff cardboard armature. My real arm went through a slit in the chest hidden by the bulk of the head, and right through the back of the head, which I worked like a puppet. I freaked out a few people walking around that night!”

If you’d like your own chance to freak people out, send a picture of yourself, a loved one or a complete stranger wearing a Muppet costume to Danny@ToughPigs.com — and you can get free candy, just like these fine trick-or-treaters! (The candy’s in the mail, kids, I promise — don’t throw eggs at the house for a couple more days!)

There’ll be more goofy photos coming up soon, and on and on through October until our paper-mache heads explode.