Here’s an upsetting Halloween story from my own actual childhood: When I was a kid, my brother and I took Halloween pretty damn seriously. We grew up in the New Jersey suburbs in the 70’s, which meant we ate a lot of junk food, even on a normal day. So when there’s a holiday that pretty much revolves around scoring free candy, that was a big day for us. When we went trick or treating, we wouldn’t bother with those wimpy little plastic pumpkins for our candy collecting. We brought pillowcases, and we wouldn’t go home until we filled ’em up. We’d drag our costumed asses up and down the street, shlepping a pillowcase full of mini chocolate bars and a UNICEF box full of nickels. We didn’t bother with healthy food back then. Apples had razor blades in them, everybody knew that, so we just reached for the Hersheys and helped ourselves. It was a golden age.

Problem was, my dad was a health nut. He ran marathons and ate wheat germ. (Unfortunately, this didn’t make him any healthier, just less interesting.) So, at some point, my parents decided this grand-scale candy haul was a bad idea, and they invented a rule that we could only keep ten pieces of candy after Halloween was over. Ten pieces! The rest of our hard-earned loot would go to work with my parents, where they would be distributed to what was apparently a horde of ravenous, overweight secretaries. I’m serious. I know, this is like the story of one of the sad kids in Charlie and the Chocolate Factory. This was my actual parenting experience.

Anyway, the natural upshot of this change in the rules was that my brother and I would go out with pillowcases like usual, and we’d eat all the best candy before we got home, so it wouldn’t be taken away. We’d stuff ourselves with as many chocolate bars and caramel creams as we could get down our throats, so we wouldn’t mind so much when we had to spill it all out on the table and choose our ten pieces. Gorging ourselves on sugar all night was probably way worse for our health, in the long run, than it would have been if we’d gradually eaten all our candy over the next month like everyone else did. But, of course, we grew up in the New Jersey suburbs in the 70’s, so our bodies were perfectly adapted to intense bursts of sugar.

The moral of this story, for parents, is that any boundary you ever set for your children is doomed to failure, so you might as well give up, and just let them eat Froot Loops and play Nintendo all day. When they grow up, they’ll be happier and more well-adjusted, and they’ll have way better hand-eye coordination.

You know, when I started writing this, there was supposed to be some connection between that story and this batch of Halloween Parade pictures, but I can’t remember what it was supposed to be. So, here’s some pictures of people in silly-looking Muppet costumes. 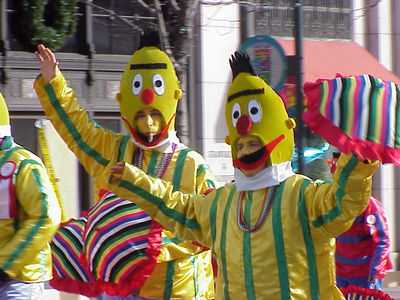 The three pictures above were sent by Chris Caines, who had this to say about the third picture: “It isn’t quite a typical stage show, because it’s in a puppet theater. It isn’t quite a typical puppet show, because the kids are wearing their costumes. Quite possibly there are adults behind the curtain lifting the kids up and wiggling them around. Sick.”

If you’d like to share a slice of your own warped childhood — or take advantage of someone else’s, like these people did — then send your photos to Danny@ToughPigs.com, and I’ll mail Halloween candy to you. No pillowcases required!

I have lots more Halloween photos coming up — stay tuned for more scary Piggys than you can stomach, plus a special visit from the King of Halloween Town…