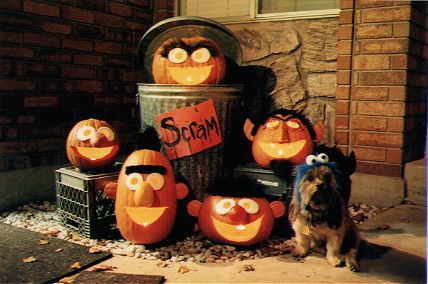 Here’s another true-life Halloween story: This week, I got the same photo of this amazing Sesame pumpkin display from two different friends for the Halloween Parade. (Thanks, Kristin and Jes!) I asked each of them where the photo came from — it looked to me like a professional display, and I thought maybe it was an official Sesame Workshop deal. I was especially impressed with the dog costume. Neither of them knew where it came from, but Jes asked around for me, and she found out where it came from.

Of course, I should have known that it wasn’t made by Sesame — it was made by a Muppet Fan! And not just any Muppet Fan, but Travis Frost, the King of Halloween Town! Travis is an old friend from the online Muppet fan community — known as SuperGrover on the TP Forum — and his fab Statler and Waldorf pumpkins were just featured on the Palisades Toys website.

And that’s not all he’s got. Here’s a photo of Travis, dressed as the Swedish Chef, with his sister Karie as the glamorous Miss Piggy, his dog Buddy as Kermit the Frog Dog, and — students of Halloween University, take note — different versions of the Bert and Ernie pumpkins.

Actually, for me, the pumpkin thing pales in comparison to the dog costumes. He made Muppet costumes! For his dog! And made the dog wear them! Not only has Buddy been dressed as Kermit the Frog Dog and Cookie Dog, but he’s also been — as seen below — the Count von Count. Does it get any cuter than this?

Although the pumpkins really are amazingly cool. Here’s some more pumpkin pics:

And check this out: Here’s an actual picture of some Sesame pumpkins that really were made by Sesame Workshop.

Travis’ pumpkins are way better, aren’t they? All hail Travis Frost, the King of Halloween Town!

Meanwhile, there’s plenty of time left for you to scare up some photos of your own… If you have a photo of yourself or a loved one dressed as a Muppet — or if you find one on the web — then send the photos to Danny@ToughPigs.com, and you will get actual Halloween candy in the mail.

The Halloween Parade will keep marching on all month — and just wait till you see what’s coming around the next corner!