But the very best thing about Halloween — the thing that gives me hope for the future, and makes me forget every unfortunate costume that I’ve had to look at this year — is that sometimes I get e-mails like this one, which I just got today from a young woman named Eva Paul.

“I wanted to thank you for the Halloween Parade especially of 2003. I had, well, what I think were great Piggy results with my costume. Your website on Piggy was entertaining and informative as to how to play Piggy. I had never realized the importance of Miss Piggy having a man’s voice and pretending to be an actress/model.

“If I gave two tips on top of the obvious Piggy costume: I concealed my eyebrows and bottom and top lip. All the photos I saw, the first thing that jumped out at me were that Piggy has no brows, and very seldom wore lipstick. Anyway, after four years, I finally executed my desire to be Piggy for Halloween.”

You see that? I made a difference. I helped Eva to realize her dream. And her dream, I’m happy to say, looked like this:

Isn’t that wonderful? I’m proud of that. If I accomplish nothing else with this website than to help unleash that on the world, then I’ve done my part.

I got more. Here’s one sent in by Casey Lamm, who writes:

“My name is Casey and I live in Boise, ID. I thought I’d submit my Beaker Costume for you to post if you would like. Mine was made from scratch using a 1 gallon OJ container, some spray paint, elastic, round styrofoam balls, electrical tape, paper mache, and a couple of pins. It made for a great time at work. I got 2nd in a work Halloween costume contest with about 600 folks as competition (I work in a call center).”

Coming in second? That’s good, Casey, but here’s somebody who got the big prize. Megan Woolover sent a pic of her friend Leila, who won her company Halloween contest with this fab costume last year.

Good, right? You want more good? Here’s my pal R.D. dressed up as Super Grover as a child.

And more. Here’s one sent in by TP reader Noah Ginex, who made this incredible Animal costume this year: 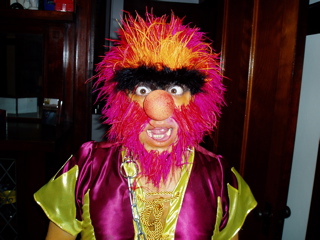 But this year, we’ve got a ringer. And his name is Drew Goldsmith.

Drew is a young man who enjoys Tough Pigs, and last November, he sent me a photo of his Halloween celebration, which I am about to share with you. At the time, Drew was eight years old, and here is the picture.

Everybody in the picture is a Muppet, except for that one weird one that I don’t know what it is. Drew is the boy sitting down there at the bottom… dressed as Jim Henson.

Drew Goldsmith, you are a prince. You’ve made me very happy. And you win Halloween.