Ah, Halloween, how I’ve missed you. Has it only been a year? It seems like forever. But here you are again, sweet Halloween.

This is the third annual Muppet Fan Halloween Parade — and last year, I have to say, I was in a bit of a bad mood. I think I might have been a little harsh on the Muppet costumes last year, a bit judgemental. Not this year, though. I’m turning over a new leaf, and giving my official Halloween seal of approval to anybody foolhardy enough to climb into that googly-eyed monster suit and go out into the world. After all, who am I to judge? It’s your life, you might as well spend it dressing yourself up like Kermit.

Or maybe I’m feeling more generous this year because I’ve finally accepted the fact that people really go and do this. This is my third October spent sorting through dozens of Muppet costume photos, and they just don’t scare me anymore. I think I’m inured to it now. I feel like I’ve seen it all before.

And maybe I have seen it all before, because people just can’t seem to keep their paws off Beaker. Take a look.

Seriously, it’s like an obsession. Beaker, Beaker, Beaker! Somehow the “make a Beaker costume” meme got loose in the heads of the American people, and it’s spread like wildfire. I don’t even think it’s peaked yet. At this very moment, around the country and possibly even the world, busy hands are stitching, getting that Beaker costume ready for the big night.

And once these Beakers are loosed upon the world, what will they get up to? What, I ask you? What?

See? How could I possibly criticize this kind of behavior? This is what Halloween is all about. 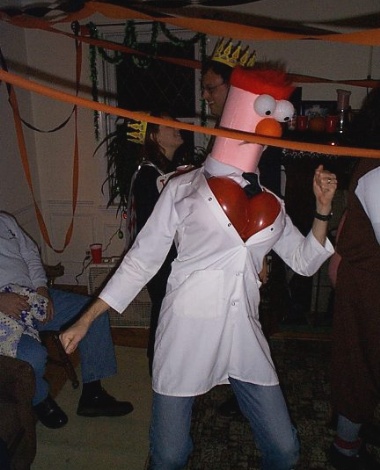 Plus — plus!!! — adding to my holiday spirits tremendously is this link here, a detailed explanation of How To Make Your Halloween Beaker Costume. Every year, I’m overwhelmed with costume recipe requests from people who have seen my Halloween Parade and think that I know how to make all those costumes. I don’t — but now here’s someone who does!

It’s Muppet Labs, and the future is being made today. Stay tuned for an equally enthusiastic look at the new advances in Cookie Monster technology.

Thanks to Jess Healey, the Finder of Great Costumes, for some of the fine costumes displayed in this year’s parade!