And sometimes it’s about dressing up like Kermit as a banana republic dictator and taking pictures with somebody pointing a gun at your head.

I can’t say I know why that happens, or how. I just know that it happens.

I don’t even remember where that comes from. I found it on some website, or somebody else found it and told me about it, or some damn thing. I couldn’t keep it in my head. I just filed it under “Halloween” and tried to forget.

Unfortunately, I remember exactly what this one is, and exactly why it makes me uncomfortable. 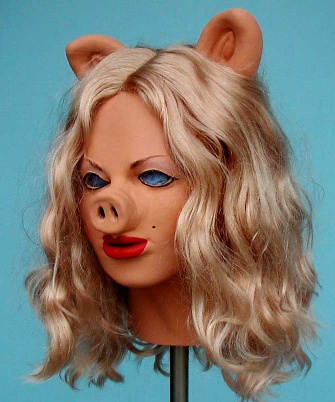 One of my pals found that on Ebay. It’s called the “Piggy Sue” mask, and there was a link to a whole website of similar rubber masks. I can’t really say much about it except that it’s not exactly the kind of mask that you’d want to wear trick or treating in the neighborhood, unless you live in a really interesting neighborhood. Anyway. Try to get it out of your head.

Moving along on the weird costume parade, check out how happy this kid is:

Well, it was the 70’s, people were easier to please back then. And speaking of low standards, what about this guy?

But enough of that, let’s finish up this page with some cool stuff.

There, that’s pretty cool, right? State reps dressed up as Sesame Street characters to support PBS. We like that. That almost makes up for that creepy Piggy sex mask, right? Or not? Should I not have mentioned it? Oh man.

There better be something good coming up in Part 6. There just better be.