Starting on the 25th anniversary of the television premiere of The Jim Henson Hour, Tough Pigs’ own Ryan Roe and Anthony Strand have been reviewing every episode of the ambitious but short-lived series. We’ve reached the end of the series, but we both have even more words to say about it.  In our previous installment, we discussed the flaws and merits of the MuppeTelevision segments, and now it’s time to address the rest of the show. 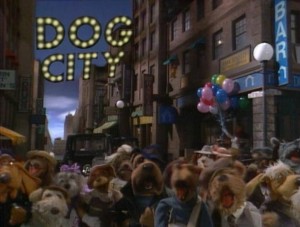 Ryan: Beyond MuppeTelevision, there’s all the other stuff, which was probably the real reason Jim wanted to do the show in the first place.  Do you have a favorite second half/other thing from the show?

Anthony: My favorite is Dog City, which I already wrote about in depth, but it’s followed closely by Secrets of the Muppets.  That says a lot about my personal taste, I suppose. I like gangster movies, I like it when Muppets are funny, and I like seeing how they make Muppet stuff.

Ryan: Dog City certainly is funny. It’s also much more elaborate than an average episode of television.  The way it builds an entire self-contained world for those Muppet dogs is comparable to Emmet Otter, which presumably had a longer production schedule.  Dog City is one of the best things Jim ever did, for sure.  Miss Piggy’s Hollywood is another highlight, and not only because it’s the biggest dose of Frank Oz in the series.

Anthony: It’s a nice showcase for Piggy, but it also makes excellent use of its guest stars.  George Wendt especially. He seems like he’s having such a great time in his scene that I really wish he’d been able to do a full MuppeTelevision episode.

Ryan: He would have been good there, but two Cheers stars in one season might have been a little excessive.  Although it would have been fun to have a bunch of Muppets popping into the control room to shout “NORM!” when he showed up on a monitor.

Anthony: Hey, if The Muppet Show can have Superman and Wonder Woman in the same season, why not Sam and Norm?

Ryan: You know who else is funny in Miss Piggy’s Hollywood? Justine Bateman. I think as a kid I actually assumed she was a bigger star than she was because of her appearance here, and she really nails her scene.

Anthony: She’s very funny. She really gets into the “Piggy isn’t worth paying attention to” spirit of the piece.  So we’ve established that we both enjoy the stuff that feels like Muppets.  But what about the more experimental segments? 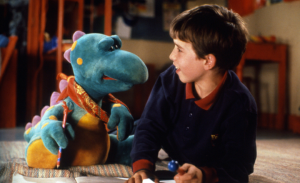 Ryan: You mean like “Monster Maker” and “Living with Dinosaurs,” which are basically hour-long dramas?

Anthony: Exactly.  I like both of those quite a bit — and I’m sure Jim would have had a hard time selling them as standalone specials, so I’m grateful they happened here — but they definitely don’t feel like the same show as the other ten episodes.  Dog City and Secrets of the Muppets both have quite a lot of the MuppeTelevision characters.  Obviously that wouldn’t have worked with these, but I almost worry they’re both too far off-model to feel like the same series.

Ryan: Yeah, they’re not bad, but they feel odd… which is really saying something for a show as unusual as The Jim Henson Hour.  Living with Dinosaurs feels more Henson-y, at least, because Dog is a whimsical, lovable character.

Anthony: Sure, but Monster Maker is basically a story about the Creature Shop.  Neither of them is a huge departure from the kinds of things Jim was into in the 80s.

Anthony: In the end, I think it helps the show to have those sorts of segments.  At the time, it was undoubtedly confusing and off-putting to many viewers, but now, 25 years later, it allows the show to almost be a portfolio representing the diversity of Jim Henson’s career. 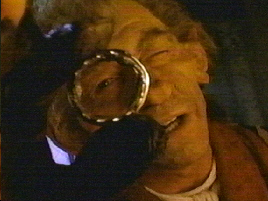 Anthony: It’s all there.  Not all of it is top-notch, but you could show these 12 episodes to anyone with an interest in Henson’s work, and they’d find a whole lot to chew on.

Ryan: For anyone interested in ascending from casual Muppet liker to full-blown Henson geek, I would say The Jim Henson Hour is essential viewing.  Also: John Hurt with a phony nose!

Anthony: The Storyteller is a weird beast, because it was already kind of a TV show before JHH.

Ryan: The Storyteller is a weird beast, as are many of its characters.  Yeah, JHH turned out to be a good way to use the Storyteller episodes that hadn’t aired yet, but I wonder if they could have kept up the pace and produced enough new ones for a full second season of the show.

Anthony: It seems likely they would have done another 5 or 6 Storytellers.  John Hurt is a busy man!

Ryan: Heck, it took up half of his day just to get into makeup. 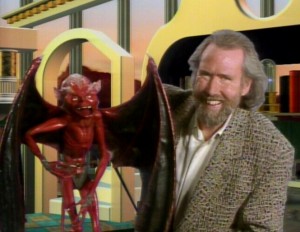 Anthony: We’ve talked a lot about Jim Henson as the creative center of the show, but what about his work as host? Brian Jay Jones’s biography talks about how Jim made an effort to be more relaxed and personable on camera, and it shows.

Ryan: I think he does fine. He doesn’t come across as Mr. TV Show Host Man like a Dick Clark or a Tom Bergeron, but he seems natural enough. He’s your uncle who wants to show you something neat.

Anthony: “Wants to show you something neat” is the perfect way to put it. He’s so enthusiastic about having a TV show where he can do whatever he wants.  There are so many intros where he says something like “We’re really proud of it” or “We hope you have as much fun watching it as we did making it.”

Ryan: Apparently they gave him the Lion as a sidekick so he’d have someone to talk to, and that was a great choice.  The Lion has just enough personality without upstaging Jim. And what a cool puppet!  When I was a kid, I really thought he might be real… a notion Jim and the gang played with themselves:

Ryan: I wonder where the Lion is now, or what’s left of him. They should put it in one of the Henson museum exhibits.  Or if not, I’d be glad to take it off their hands.

Anthony: Yeah, the lion looks great, and he shows off a side of the Creature Shop that wasn’t terribly well-known at the time.  No one in 1989 associated Henson with realistic animatronics, I don’t think.

Ryan: That’s true, despite the advances made in films like Dreamchild and Labyrinth.  Probably because nobody saw Dreamchild or Labyrinth.

Anthony: No, those were not successful films.  And The Jim Henson Hour was not a successful TV show, of course.  But still, it was a chance to show those techniques off, so I can see why they went for it.

Anthony: I think we’ve answered that question in these reviews over and over.  Audiences didn’t know what to expect from week-to-week, and even the Muppet segments don’t feel that much like the Muppet Show.

Ryan: A reasonable theory.  Still, it’s curious to me that it was low-rated from the very beginning.  Did people not know about it? Did they know about it and just not have any desire to watch it? 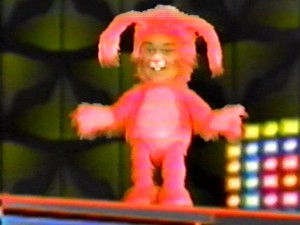 Anthony: It’s very easy to imagine a family tuning in to watch the new Muppet thing, seeing Louie Anderson get turned into a bunny, and deciding to change the channel.  And it was unquestionably a hard show to promote.  I’m sure some people who heard about it were interested in The Storyteller, but not Muppets, or vice versa.  “It’s Jim Henson doing whatever he wants!” is an effective sell for hardcore Muppet fans, but less so for random people watching The Today Show or Family Ties.

Ryan: True. Heck, even some of our hardcore Muppet fan friends aren’t interested in the weirder stuff.

Anthony: And even some of the ones who are have trouble with the flow, like I mentioned in my review of “Videotape/The True Bride.”  I’m just not always in the mood for back-to-back Light Jim and Dark Jim, which is a problem.  That said, whatever flaws it has, I really wouldn’t change a thing about the show as it exists.  Nearly all of its flaws come from its far-reaching ambition, and I’d take an uneven-but-fascinating show like this over a generally mediocre one like Muppets Tonight anytime.  That show had some good episodes, but it would be impossible for us to do an in-depth 16-part series on it.

Anthony:  Exactly.  To this day, there’s never been anything else quite like The Jim Henson Hour, and I’m so happy it exists.

Ryan: Me too! I can’t wait to watch it all over again sometime.

Click here to revisit all the previous installments of My Weeks with The Jim Henson Hour.  And click here to pop in and shout “NORM!” on the Tough Pigs forum!

by Ryan Roe and Anthony Strand